Developer Pixel Soft and publisher Level Infinite have certainly created a unique experience when it comes to Chimeraland. This sandbox MMO has been one of the most unpolished games I have played this year, yet simultaneously one of the most entertaining. Once a new player overcomes the initial learning curve, which I mentioned during my review in progress, the various systems have a lot of depth to explore and interconnectivity. Unfortunately, due to some of the graphics, ongoing minor bugs, localization issues, and lack of a cohesive narrative, it will likely turn away many players. 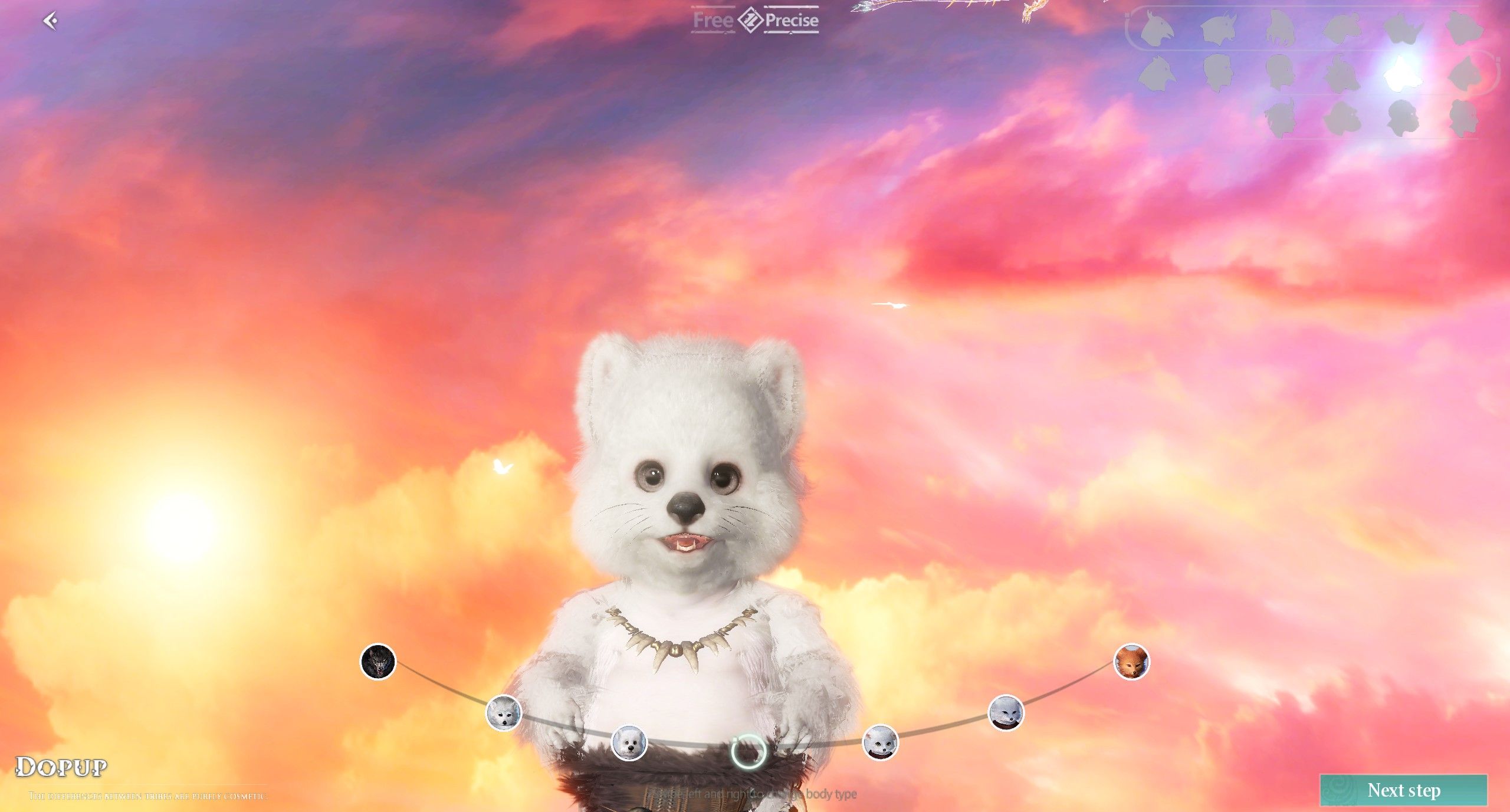 The first experience players will have with the game is a great one. The character creator for Chimeraland is top-notch. There are numerous races to choose from, which can range quite a bit in age. If a player wants to make a small furry baby bear or a muscled squid man, there is an option available. There are also extensive customization options, allowing players to truly design something unique if they want to take the time. Unlike some other games with a customizable character creator, it is easy to make a “good” looking avatar. At the same time, with minimal effort, you can make a monstrosity. 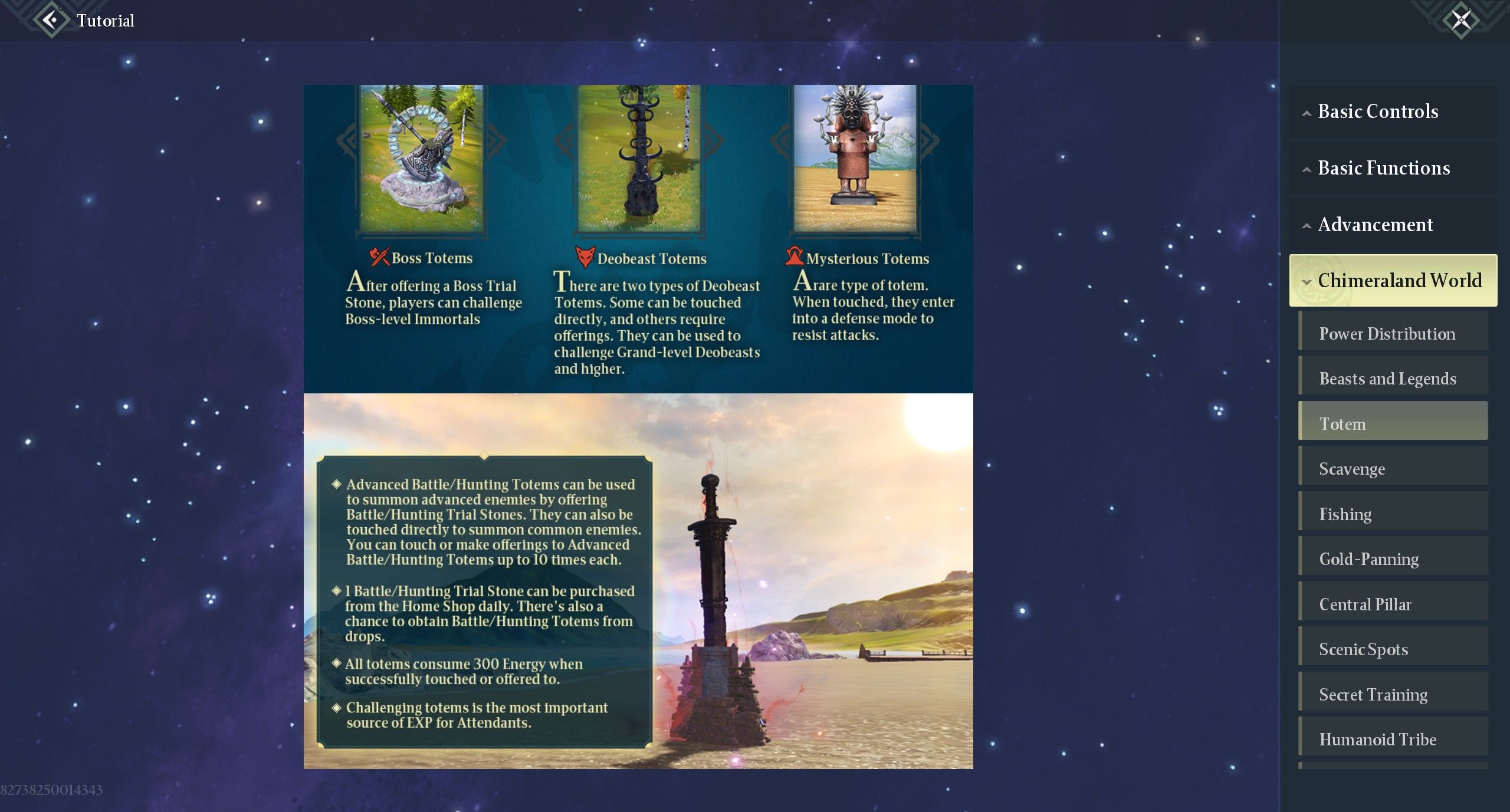 Once finished with character creation and picking a starting location, players are dropped from space and plummet to the planet's surface. After impact, without injury, the main questline (extended tutorial) immediately starts, and the game throws multiple systems at you to learn quickly. For many players, this may feel overwhelming, especially when combined with the localization issues in the quest text. Luckily, an extensive guide section in the main menu with visuals exists. Most quests also have a "goto" arrow highlighting what players need to click on when navigating the UI.

The Chimeraland UI feels dated but functional, on PC it can be difficult to navigate. New players may want to practice going back and forth so they can locate menus that the game quickly introduces you to early on. It can also be problematic when clicking on specific targets for combat/gathering or making selections in some menus. One area I had a particular issue with was once I built the GamePod (Arcade Machine) for my home, I would activate it to select a challenge, and if I spent too long in the GamePod menu, it would suddenly close. While mainly a minor annoyance, these bugs broke up the flow of gameplay.

On mobile, I found the UI more intuitive to navigate in comparison. The menus were clearly positioned for your fingers' access on a touchscreen. Playing on mobile for just a few hours even helped with remembering where everything was located on the PC client since there seems to be very few changes made. When targeting objects, resources, and enemies the UI is also snappy and more responsive. 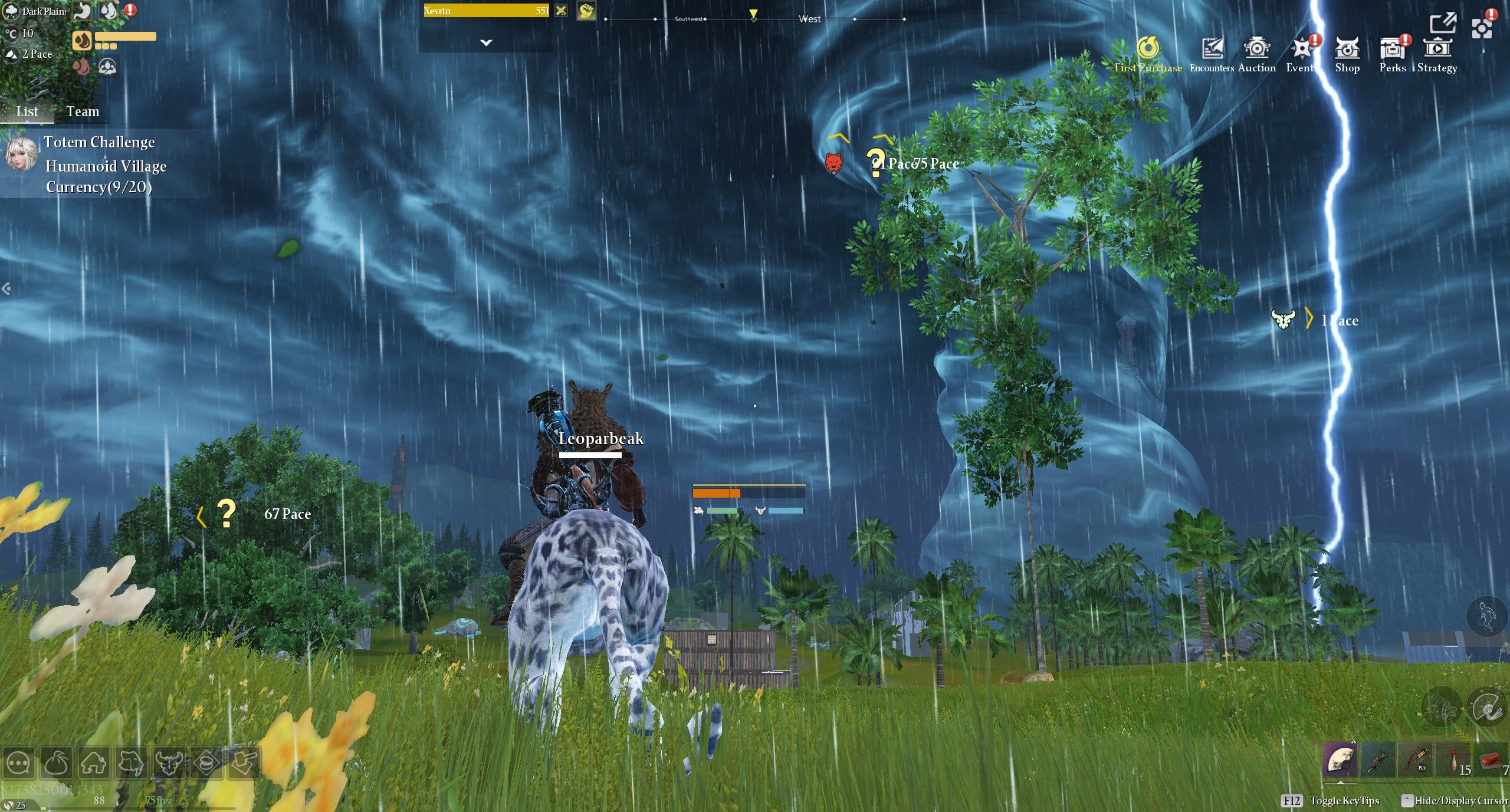 For the visuals and graphics, I have never quite found a game with this large of a range in quality. Distant vistas can look amazing, many creature designs are great, weather events feel dangerous, and character models are top-notch. But when up close, the terrain is low texture, with a lot of flickering of distant features, and the pop-in is noticeable. While exploring, I found it jarring at first, but eventually just got used to ignoring the lower textured elements.

I found combat to be a rather basic experience. There is some depth in choosing what weapons to specialize in, but most enemies can be defeated without much effort by strafing with a ranged weapon. Some of the melee weapons were interesting and had interesting secondary attacks. But I typically fell back on using a ranged weapon so I could more easily avoid ranged attacks and down flyers quickly. My biggest challenge was tracking ammo, equipment durability, and my pet/mount/attendant number of deaths.

The other various gameplay systems in Chimeraland have quite a lot of depth. A character’s power is based around the gear equipped from various sources, four main areas unlocked by leveling, and mounts/pets/attendants. Bloodline, Life Skills, Stars, and Sigils unlock through leveling up the home, individual skills such as mining, and a character’s level. As levels increase, skill points can be spent on various bonuses or additional slots open to equip more items with stat bonuses. In most cases, slotted items can be further refined for better stats. When it comes to Stars specifically, where players spend their points determines the weapon types they specialize in. 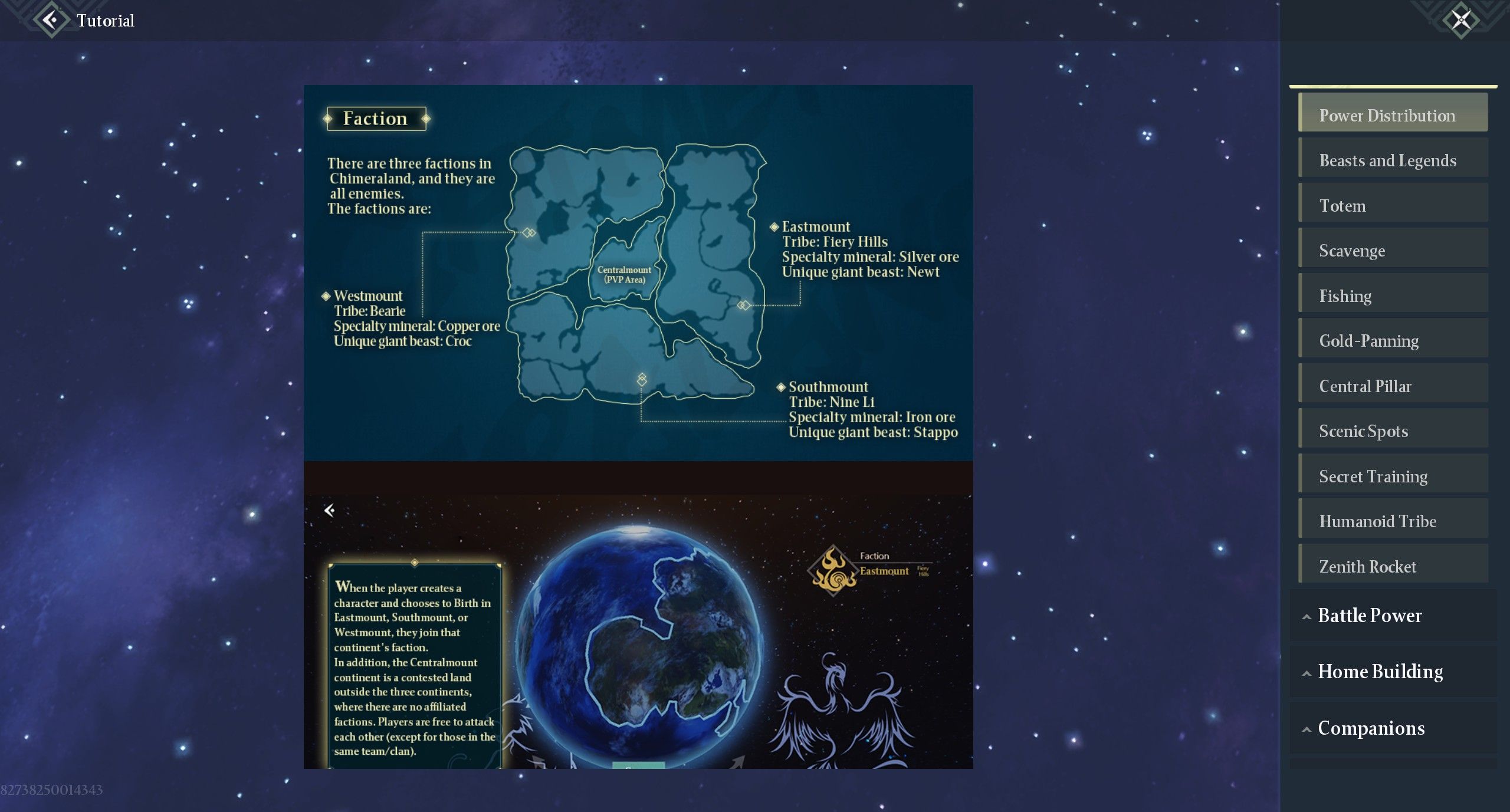 The story in Chimeraland is a hot mess that I still don’t understand. The game world is one of the weirdest I have experienced. But at its core, this is a sandbox MMO mashup. So the story and world setting don't matter too much. If players want to focus on exploring, they have multiple continents to wander around searching for resources, rare enemies, and event totems. Avoiding environmental hazards such as tornados or flash fires can be a challenge.

Or perhaps a player prefers the survival-style base-building aspect. They can unlock multiple tiers of crafting and build almost anything they want within the limit of their current base level. Though the build system is not as responsive as some other survival games, causing the placement of some tiles to be challenging.

Maybe just collecting and evolving captured creatures is of the most interest. Players can work towards evolving mounts/pets from an egg into some amazing-looking rare creature types or go complete mad scientist and randomly connect body parts as a permanent pet devours other defeated pets. The content opens up even further with each tier of gear, from hunting grand beasts to eventually returning into space.

To accomplish all this, everyone will need to collect resources along the way, and Chimeraland does have a great system in place to track almost any resource. A player can click on most items in an ingredient list and either ping the map to identify the closest nodes or look in the auction house.

Be aware, that this is first and foremost a F2P mobile title that has been ported to PC so expect the typical monetization and multiple splash screens after login for events/sales. I will say that compared to some other recent titles, Chimeraland is not that bad. It has an adventure pass with three levels that include Fine (Free), Luxury ($4.99 US), and Divine ($9.99 US). Each tier gives you access to more resources per level completed and eventually a cosmetic or vehicle for the highest tier. Just keep in mind how many days remain on a pass before purchasing it to maximize the value.

The game also has four primary currencies. One of which, Amber, can only be purchased with cash. The shop contains various cosmetics, progression resources, pet evolution items, and a few items with combat stats in the Oddities section. I have not felt the need to buy anything yet, but some of the evolution pills have been tempting to try out. Players also receive several free daily login rewards. I just wish the developer would put them all on one screen to claim instead of having to search between three or more menus.

I didn’t run into any major technical issues during my time with Chimeraland except for the first few days after launch when the PC client on Steam was having stuttering issues. But my wife did have her account stop syncing with the login server at one point. It was a simple fix. She logged out of her account at the server select screen and then logged back in with her Steam account.

Chimeraland by Pixel Soft is an unpolished experience with minor bugs, but it is still weirdly fun. Player races and various creatures are some of the oddest things I have seen in any MMO. The layout of the UI for PC is not intuitive compared to mobile, and there are localization issues. Players may be turned away by some of the graphics and the initial learning curve. But if you can get by these issues, there is a lot of game here for players who enjoy exploration, survival building mechanics, and pet collection/evolution. While many of Chimeraland’s systems at a base level can feel familiar, it is a unique experience.

Full Disclosure: In-game currency and items provided by PR for the purpose of this review.