When I first started playing Century: Age of Ashes, my son asked me to describe it. It’s an aerial combat game but In most aerial combat games, I have shields, targeting computers, and a basic level of control over my vehicle.  In Century: Age of Ashes, I have a dragon who doesn’t have a computer, a shield, or the ability to be totally reined in.  Century is a really fun game but the learning curve is really steep.

Century: Age of Ashes offers a few modes to play: an incredibly thorough tutorial, a 3v3 skirmish mode, and eventually unlocking a full 6v6 match mode.   Specifically, the 3v3 mode feels great as it’s a stellar starting point for new players to get their bearings.  With only 6 dragons on the battlefield, it’s easier to move around without immediately being fired upon. Century did a great job of taking a relatively small map for these 3v3 skirmishes and making them feel vast and expansive. Part of that is from using every part of the battlefield from the ground to the highest point in the sky.

After a few levels, regular 6v6 matches are unlocked with 3 separate game modes: Spoils of War, Carnage, and Gates of Fire.

Spoils of War definitely has the most amount of strategy involved. Players attack NPC money mules to collect coins. They are easy to kill and don’t fight back so the real strategy is stopping other players.  If you’re holding cash when you’re attacked, you’ll lose some every time you’re hit.  If you die, you’ll lose everything you still had and your opponent can claim any cash you lose. The detail here is amazing in that there are so many moving parts to this mode.

For instance, your team coffers may be locked which is equal parts frustrating and fun.  Your coffers can be destroyed by the enemy team which doesn’t necessarily mean you’ll lose, but it does cause a large loss of coin. It is the best mode the game has to offer simply because there are so many elements to it that I had to be very intentional in everything I did.  It was exhilarating.  I can’t remember a dogfight that required so much strategy.

For example, in one instance, the powerup that allows players to destroy the enemy coffers appeared and I went for it.  Right after I grabbed it, I was immediately a target as the other team didn’t want me to blow up their coffers but it wasn’t the best time for this.  I was also holding about 300 gold!  Since the winning team is the one with more gold in their coffers, that probably wasn’t the best time to grab a big target for my back. A better strategy would have been to take the time with someone else playing target to go drop money off at our coffers.

Every single decision I made, whether to attack or defend, whether to drop money or keep collecting and who to attack or not attack while on the offensive had to be very intentional.  Yes, there are games and game modes that this is a normal level of strategy but how awesome to incorporate this into a dogfight in the air!

Carnage is a typical deathmatch style combat with a twist.  Every time you make a kill, you get a bounty.  That bounty makes your death worth more points.  I am not by any stretch a great player, so I didn’t often if ever have large bounties built up but there was something really satisfying about killing a player who was on a killing streak and scoring a huge bounty for my team. It gave what is the most tired overdone style of dogfighting a shot of energy and life.

Gates of Fire is a take on Capture the Flag but it’s more than just grabbing the flag and taking it home over and over. Once you have the flag, you’ve got to go through a series of gates.  I never saw a team fully win a round outright by maintaining control of the flag through all the gates.  When time was up, the team with more gates under their control wins the round.  That does offer a certain level of strategy. Unfortunately, with 12 players on the battlefield, it gets really intense and chaotic which took away from the overall experience because there was a feeling like the match was incomplete whenever no one outright won the round.

Unlike other games in the aerial dogfighting genre, the goal in Century isn’t to stay high and unreachable.  Part of the strategy is knowing when to fly high or fly low, when to attack from a distance or at a closer range, and when to engage or withdraw. Again, game modes like Spoils of War are simply amazing because they require a lot of attention to detail with every decision that is made.

Century: Age of Ashes has 3 classes of fighters: Marauder, Windguard, and Phantom.  All three have different abilities.  I personally loved Windguard’s smoke trail ability which lowered visibility making it harder to be tracked.  Unfortunately, there just weren't enough differences between them. 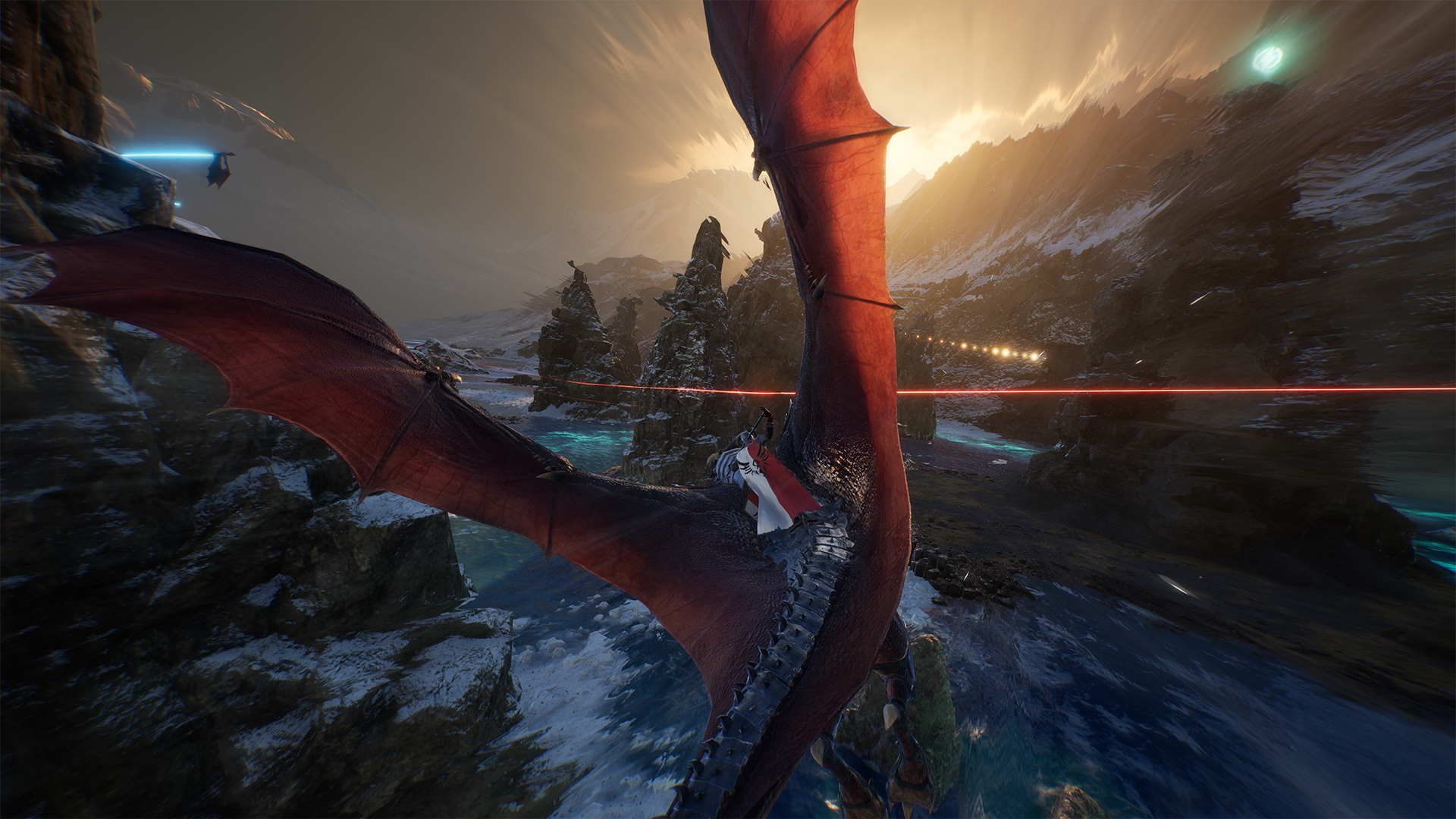 The intention is that each class of fighter plays its own role, such as the Phantom acting as a sneaky ganker, or the Marauder able to destroy enemy fireballs that are targeting them. However, in my gameplay these differences were simply not pronounced enough to make a huge difference. This could be down to the individual game modes as well: I felt that some dragon abilities were simply better suited for a specific game mode, rather than being balanced more for each. As a result, I never really felt I could plan my strategy around a playstyle a dragon offered, rather it was more “which do I want to play today?”

One of the best parts of Century: Age of Ashes is how beautiful the dragons look. Each dragon is beautifully detailed, and thankfully aren’t simply pallete-swap carbon copies of each other..   Each dragon looks unique.

It's important to note that Century is free to play but unlocking dragons is reliant on the use of micro-transactions or buying one of three founder’s packs that have different perks based on the level of spending.  It is possible to unlock everything right from the start with the Behemoth Founder’s Pack which is priced as a full $59.99 USD game. Once you have a dragon, unlocking their use is fun and easy but requires more time playing to hatch their egg.  After you play additional rounds, you’ll have access to your new dragon.  I’m not someone who gets on my soapbox about micro-transactions for a free-to-play game.  The fact that you can decide to play the full game without spending any money is just awesome.  I also like that if you decide you want everything, you can buy it for no more than any other full priced video game.  Even better, you can decide to purchase parts of the game at a lower or mid-tiered level in between.

Unfortunately, there were other problems with Century: Age of Ashes.  My biggest problem was the lack of AI in the game.  For instance, if I was in a 3v3 skirmish and one of my team members dropped out, we were just lacking a third of our team. Even in a 6v6 battle, the loss of a target, er um, teammate, was deeply felt by everyone still in the game.  Century needs to add in AIs for dropped players to keep it more evenly matched when someone disconnects.

Speaking of AI, I really wish there had been a player vs computer component to Century.  One of the best ways to train for PVP matches is to play against AI opponents at a comparable level but after the tutorial, Century just throws you in with other players at differing levels of competency.  My first 6v6 match, I was an absolute mess because on top of trying to understand the game mode, I had players who were already level 12 or higher that killed me the moment they saw me.  I simply was unprepared for that.  Also, I don’t always like playing in PVP matches because I’m not a great player but AI opponents create a game that can feel a lot more playable for me.

Lastly, I really hope that Century: Age of Ashes expands its content.  This is a great start to what amounts to a game that thanks chiefly to Spoils of War is an incredibly innovative take on the aerial dogfighting genre. That said, unless you really enjoy it, it can start to feel repetitive very quickly.  I need more  reasons to come back other than just because the dragons are pretty and there's a great strategy element.  Adding in more content can only help keep Century relevant for a long time to come.

I really did like Century: Age of Ashes.  It’s been a long time since I just sat and sank a few hours into an aerial combat game, and this one did not disappoint.  Hopefully, some changes will come soon and I’ll be able to continue to enjoy flying my dragon and taking out my enemies.