If you’re a lapsed Final Fantasy fan who wishes the series would return to its 2D roots, boy do I have a surprise for you. Square Enix heard your wish and granted it, only with a “Calypso in Twisted Metal” style swerve: it’s not called Final Fantasy, it’s called Bravely Default II.

A group of champions of destiny referred to as the “Heroes of Light?” Check.

Crystals that need to be found lest their power be harnessed by malcontents? Check.

An apocalyptic event that can only be prevented by said crystals? Check.

It’s like someone played a ton of old Final Fantasy games, made a bullet list of recurring themes, and decided to make a brand new game with those same themes.

Now please don’t immediately translate my snark as dislike, because despite being a modern remaster of old FF in everything but the name Bravely Default II is still a meaty JRPG adventure.The classic turn-based combat is still engaging, that engagement is only heightened by the game’s unique Brave/Default system. The job mechanics work beautifully and don’t feel outdated, especially when I can mix and match. And, even though I’ve ragged on it a bit, the 60-hour story is still interesting even if it’s a bit by the numbers.

The story follows a young sailor named Seth after he wakes up on a beach with no recollection on how he got there (even Zelda wasn’t immune from this game borrowing from it OK I’m done). He eventually meets up with princess-turned-refugee Gloria, the chatty scholar Elvis, and his hired mercenary Adelle. These are the four chosen Heroes of Light who, along with the elemental crystals gathered throughout the story, must seal away an ancient evil. It’s nothing we haven’t played before, with typical story beats including Death of a Trusted Friend, Betrayal by a Trusted Friend, and Sacrifice Made by a Trusted Friend, so don’t expect to be wowed by an original story.

That said, the fully voiced scenes that see the story through are very well done, with stellar voice acting throughout. My favorite of the heroes is Elvis, the sarcastic Scot scholar who looks for knowledge as often as he looks for drink. He elicits genuine smiles and laughs as he speaks,  he’s cracking a joke or saying something silly with a delivery that gets me every time. That said the obvious leaning on multiple accents from around the world to add flavor to the voice acting creates some tonal disconnect. I’ve never seen a knight in full armor speaking in an Australian accent before, but Bravely Default II goes for it, bravely...but perhaps it should have stuck to a single default. 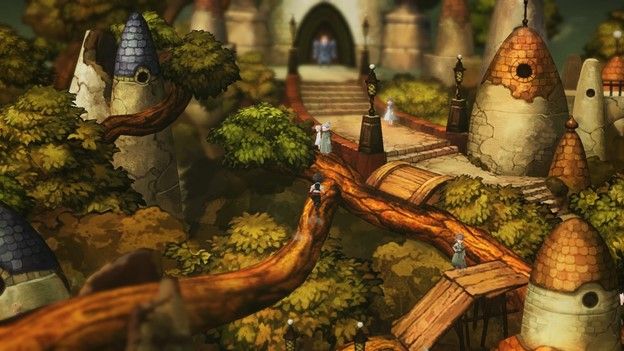 Playing through the story is traditional JRPG fare, with towns, dungeons, and other areas lining a vast open world map filled with enemies. Cities are beautifully accented by a watercolor art style, and Bravely Default II provides a button to zoom the camera out and see the entire hub so I can really appreciate it. Side quests can be assigned to me by non-player characters, ranging from “talk to this person” to” conquer X amount of a certain enemy” and rewarded with items and money. Shops allow me to purchase items and equipment and sell back what I’m no longer using, fitting right into the “standard JRPG” template. It’s ground I’ve covered before, but it’s still executed well.

Where the game does stand out, however, is in its trademark battle system. Out on the world map enemies walk around freely, and while there’s no random battles (we’re not completely in old Final Fantasy territory here) if an enemy sees the party approaching it can run towards the group and initiate battle quickly. Fights are turn-based with the order of actions based on characters’ stats, again standard fare in the JRPF realm, but here I have an interesting mechanic that allows me to experiment a little bit more.

The key mechanic I’m referring to is the Brave/Default system first introduced in the original Bravely Default. Instead of attacking every turn I can choose to “default,” which puts a character in a defensive position while “storing” the turn for a future turn. I can Default up to three times, and on the fourth turn unleash four actions at once in a furious onslaught. Conversely, if I’m coming up against an enemy I know can be defeated easily, I can activate “Brave” up to three times and attack four times right at the start. The risk comes if I don’t defeat the enemy, because I then have to wait the amount of turns I took early before I can act again.

This system adds a fantastic risk/reward element to the JRPG formula, a layer of experimentation other games of its type don’t normally offer. I found myself during a grinding session mowing through enemies with everyone Braving to the max, never seeing the consequences of not finishing off my foes in the first turn, and anything that makes grinding go by faster is a win in my book. However, eventually this led to a false bravado once I approached the boss I was grinding for, as I tried the same max Brave tactic and was stomped into the dirt. The trick is finding the right mixture of who should Brave, who should Default, and who should do neither in order to win the day, and I love the extra strategy involved. It’s an ingenious way to make Bravely Default II stick out from other JRPGs, making me actually want to engage every enemy I see.

Speaking of bosses, the main reward of defeating them is an Asterisk, which allows me to access a new job in the game’s robust Job system. Each job can be leveled up to teach the user certain abilities, which can then be equipped and used even when said character changes jobs. A character can even equip two jobs at once, though only the main job gains experience after a battle. This system creates an interesting scenario where the starting class, called Freelancer (*cough*), is actually one of the best in the game, as it offers perks that boost the amount of Job Points a character can receive, making leveling up the other jobs easier down the line.

Experimenting with job combos is the best part of this system, as I can create some Absolute Units to wage war on some poor unsuspecting enemies. I’d recommend pairing a Red Mage job with any other magic type for the mage in your party, joining the Monk and Vanguard jobs in the early going for your physical attacker, and grouping Thief and Ranger for your speediest characters.

Bravely Default II is a retro JRPG disguised as a brand new JRPG. The ideas and systems running throughout the 60-hour game feel more like an adventure I played on the Super Nintendo than one on current consoles, for better and for worse. The story told is paint-by-numbers fare, and while it’s not bad, it’s also not something that’ll knock your socks off even if the voice acting is well done. The turn-based battle system is the same way at its absolute core, playing just like the RPGs of yesteryear. However, the magnificent Brave/Default and Job systems make battling feel much more modern, lifting the entire experience up in the process. Bravely Default II isn’t revolutionary by any means, but it’s still good classic era JRPG fun that’ll scratch the itch for an old-school adventure at least for a little while.