A3: Still Alive is the latest mobile MMORPG from Netmarble with a twist. In addition to the typical MMORPG world and class design, A3: Still Alive also includes a Battle Royale mode. However, what could have been a unique twist on an oversaturated genre has devolved into another auto-battling idle game bursting with pay-to-win mechanics. There was a lot of possibility with this one, but unfortunately its story has turned into one of missed potential.

As one of the more prevalent mobile game developers, a certain level of polish is expected from any Nebmarble game. In that aspect, A3: Still Alive delivers in spades. It’s definitely one of the most polished mobile MMORPGs I’ve ever played with beautiful graphics, immersive cutscenes, and responsive controls.

There are little nuances, such as having sliders instead of only presets for character customization and a camera mode full of filters, which put it a level above other generic mobile MMORPGs. Furthermore, the game runs quite smoothly, even on my four-year-old mobile device, and has scalable graphics settings that will reduce visual effects before performance issues start occurring. This allows players to experience the full beauty of the open world while maximizing performance during group content without having to manually switch settings.

Despite this polish and the little extras, A3 quickly devolves into one of the most lifeless experiences imaginable. It’s as if the game was developed by robots to maximize efficiency and not human beings who poured their souls into an artistic creation.

The biggest fault lies at the foundation of A3 in its auto-questing system. This isn’t simply a toggle to grind nearby mobs or move the player to the next questing area. Once engaged, auto-battle will continue to complete quests until you reach the next part of the story or the Sleep Mode engages. 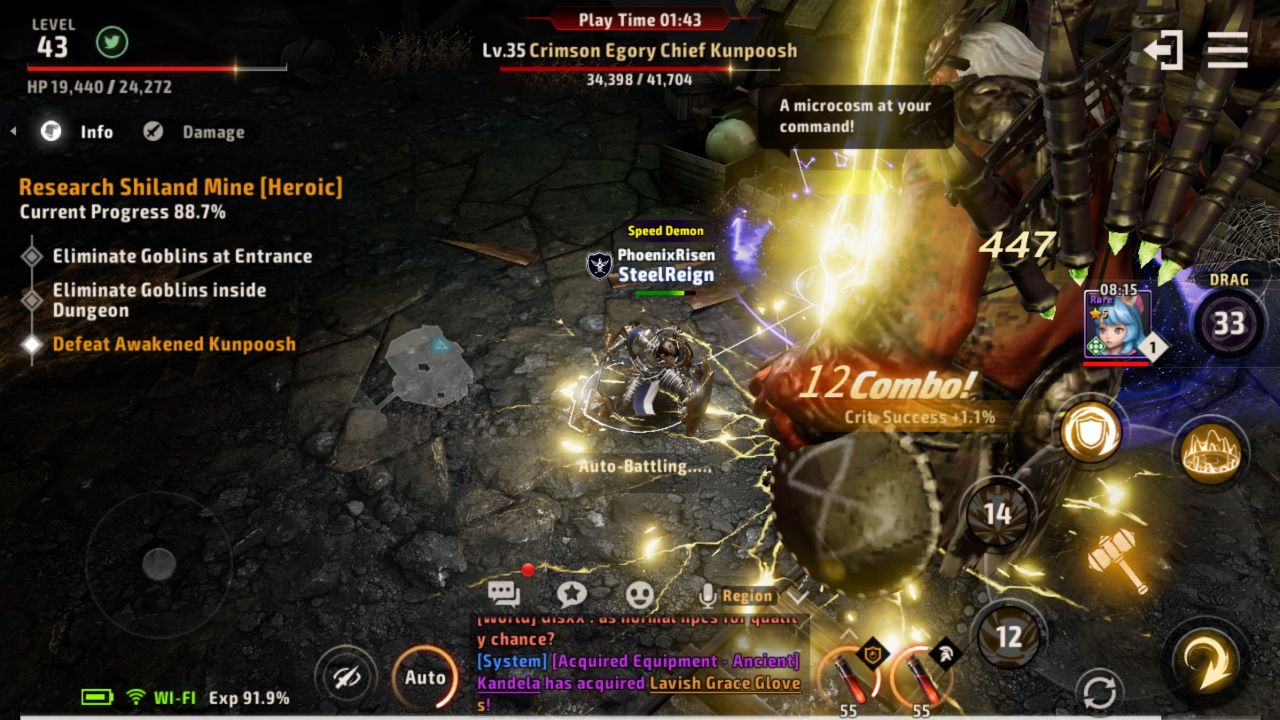 Not only is the auto option available in story content, but it can be used to complete all content in the game with the exception of the Battle Royale mode. Even PvP modes or the endgame raids aren’t exempt from using auto-battle. Instead of being a convenience system, it changes the game from an engaging experience to an idle tapper.

This could have been less of a problem if limited to certain types of content or if enemies were more difficult, but for the most part the AI is good enough to clear everything as long as gear and characters are upgraded. By creating a system that encourages players not to actively play the game, the gorgeous visuals, tight controls, and story are all marginalized.

The next major problem with A3 is its monetization system. Just like everything else about this game, it’s systematically designed in a way to squeeze as much profit as possible, specifically targeting big spenders. There are so many things that can be purchased that the game has three separate stores with multiple tabs in each.

There are, of course, a plethora of introductory packages that include paid currency, in-game currency, and enhancement items. There are member points that increase character stats based on how much money you’ve spent and daily, weekly, and monthly stores with special ‘discounts.’ Then there’s the most problematic of all, which is the Soul Linker shop. Soul Linkers are essentially pets that can deal a significant amount of damage and have powerful abilities. The most powerful Soul Linkers can only be obtained through paid currency and still have a low draw rate of 0.036 percent.

Another issue with A3 is its web of character management systems. Having a huge array of characters customization in an MMORPG is something that usually excites me. However, there’s a point where enough is enough, especially if those upgrade systems are essentially linear.

The same can be said for the quest and adventure systems. There are main quests, progress quests, region quests, surprise quests, support quests, and daily activity quests. This would be some great variety if any of them were interesting, but again they just turn into click quest and wait for your character to auto-complete it.

The large variety of adventure modes would be a refreshing change from the grind if auto-mode wasn’t also available here. We’ve got solo dungeons, small-group defense modes, boss raids, large-scale defense modes, guild bosses, battlegrounds, and guild territory modes. Most of the guild modes require active coordination with your guild, so don’t expect to experience any of these if you’re a casual player.

Finally, let’s discuss the ‘unique’ aspect of A3: Still Alive: its Battle Royale mode. Honestly, it feels very tacked on. The MMORPG and Battle Royale aspects of the game are essentially separate, except for your character’s appearance and the fact that playing BR earns you currency for the MMORPG mode. Your class and character progression do not transfer to the BR mode, for better or worse.

On the plus side, this creates an even playing fields for each match, but it also makes it feel like a mini-game instead of an integral part of A3. The only real connection is that certain BR weapons are unlocked based on your character’s level. Instead of finding weapons on the battlefield, players select a single weapon before each match. The skills you can unlock for that match are based on that weapon choice. 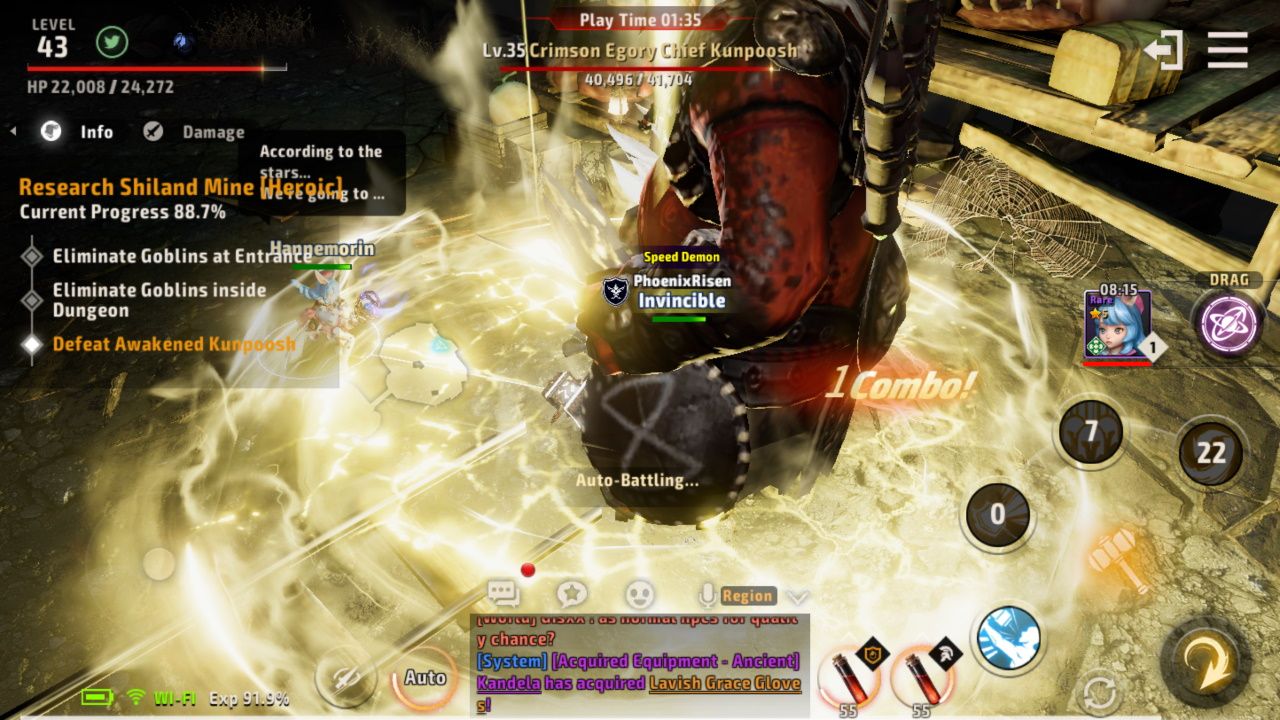 The arena is symmetrical with four sectors. The first three sectors have randomly spawning enemies of various power that drop equipment, experience points, and weapon enhancements stones that provide access to new skills. After a certain amount of time, players are required to move to the next sector or they die after a few seconds. The inner-most sector is empty except for the final few players dueling for the top spot.

Overall, the game mode is a nice diversion from the grind and offers some decent rewards, but it quickly gets repetitive and each match feels similar to the last. Thankfully, the pay-to-win aspect is limited to a unique weapon available for those who purchase the battle pass, but the standard weapons are strong enough to win a match.

If you’re looking for a deep MMORPG or Battle Royale experience then A3: Still Alive is not that game. Most of the game plays itself, the monetization model is relatively offensive, and progression is overly complex for no reason. Each of the classes are also gender locked, which shouldn’t be a thing anymore. On the other hand, it’s a very pretty idle game.