In case anyone missed the announcement two weeks ago, Shadowlands Alpha started. Since this is still very early Alpha, we only have a limited amount of content available to test, but I’d expect that to broaden out as the weeks go on. When Alpha launched, there was just Bastion and the new starting zone Exile’s Reach (Alliance), which were available. Last week Torghast was opened up for Priests, Warlocks, Mages, and Demon Hunters. After a week of testing in Alpha, it’s a good time to share some of my experiences and initial thoughts. For anyone trying to avoid spoilers, I’m sticking to talking about the experience of playing through the content. I will not be discussing anything which happens storywise and hasn’t already been announced by Blizzard. 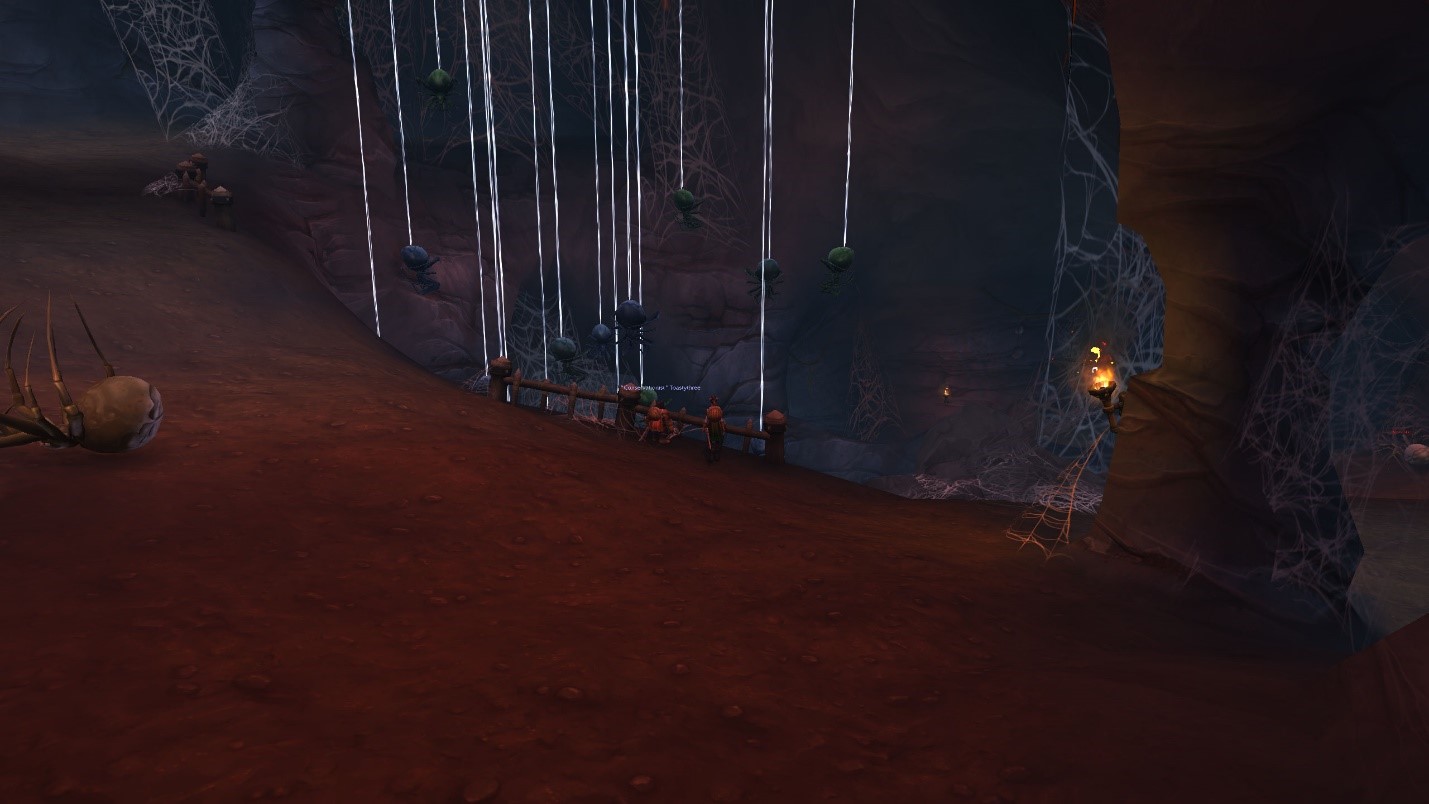 Exile’s Reach is an island new characters will be sent to upon creating their first character. Players who are already playing and create alts will be able to pick between this new zone and doing the old race-specific starting areas. Allied Races start at level 10 and don’t have a starting area anymore, they just go right into BfA content, though once the other expansions getting rescaled, we should have a choice of expansion content on Allied Races as well. Since Exile’s Reach is the default for new players, the experience is aimed at teaching them all about the basics of playing World of Warcraft.

As a new player experience, Exile’s Reach is excellent. As Blizzard has said, the new character is part of an expedition sent to find another team that has gone missing. In some ways, the set-up felt reminiscent of the questline in which we got shipwrecked during BfA. One of the best updates I noticed while working my way through this zone is the tutorial pop-ups have been redesigned to be MUCH more noticeable. It’s a sleek design and even points out when new abilities are learned and how to add them to the action bars. 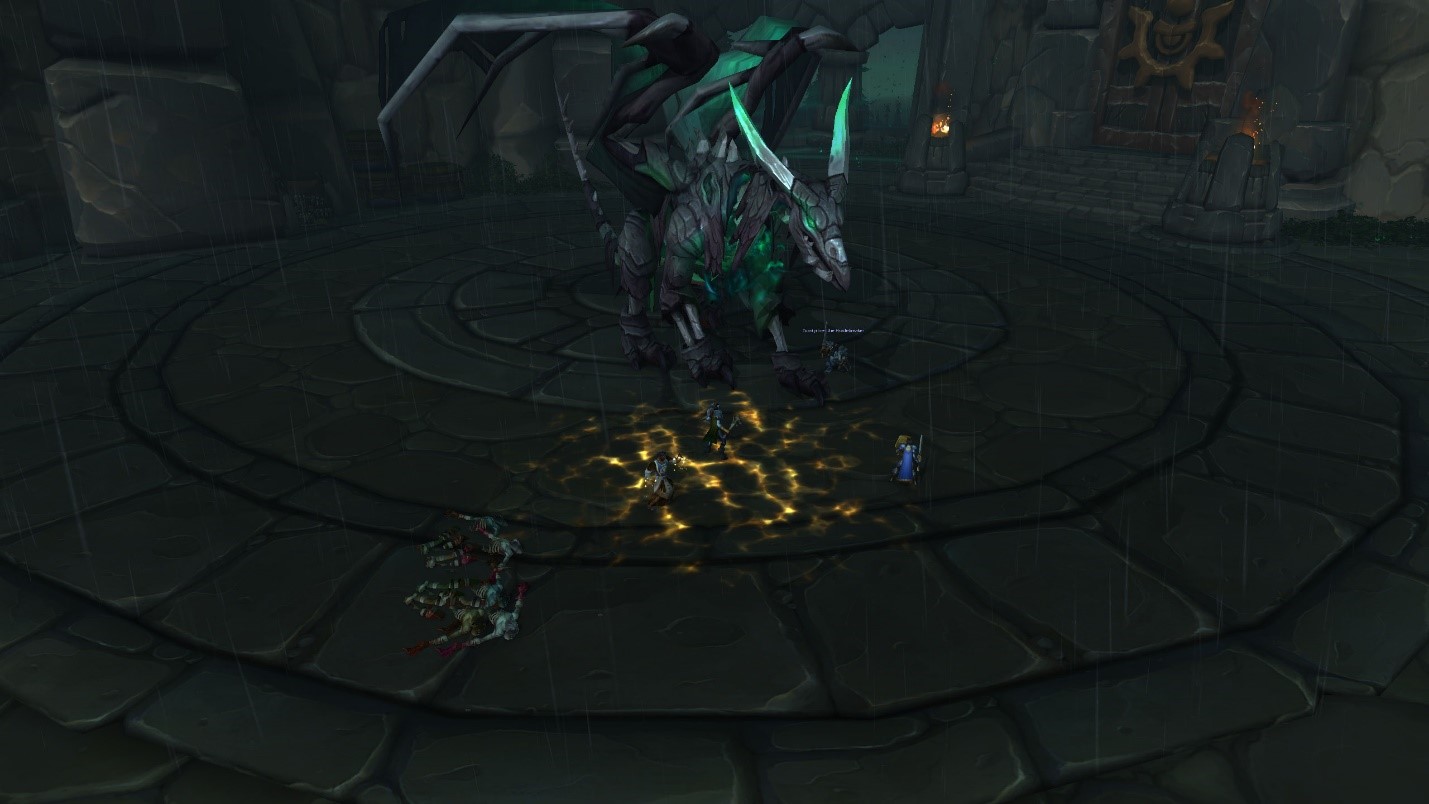 Another upside to Exile’s Reach is it also introduces some freedom to explore the area and find random things like treasure chests. All of these things were more prominently marked than they usually are, which helps in training players to look for them. There’s even an optional group quest to introduce the idea some mobs need to be tackled with a group. I have to imagine none of this has been balanced yet because when I went through, we steamrolled everything. Of course, I was playing with a friend, so that may have further thrown things off.

One concern I mentioned in my previous column was I didn’t want to lose the race identity players got from the original starting zones. Unfortunately, it looks like this is the case as everything is focused on the player’s role within the Alliance and helping them. It makes the race you choose seem like a purely cosmetic or min-max (for racials) choice. I am not really into RP, but I always appreciated knowing the general outlook and approach to the world each race has, and then within that context how they fit into their faction. This seems like a massive loss for new players, especially those who may never see any of the old race-specific content. 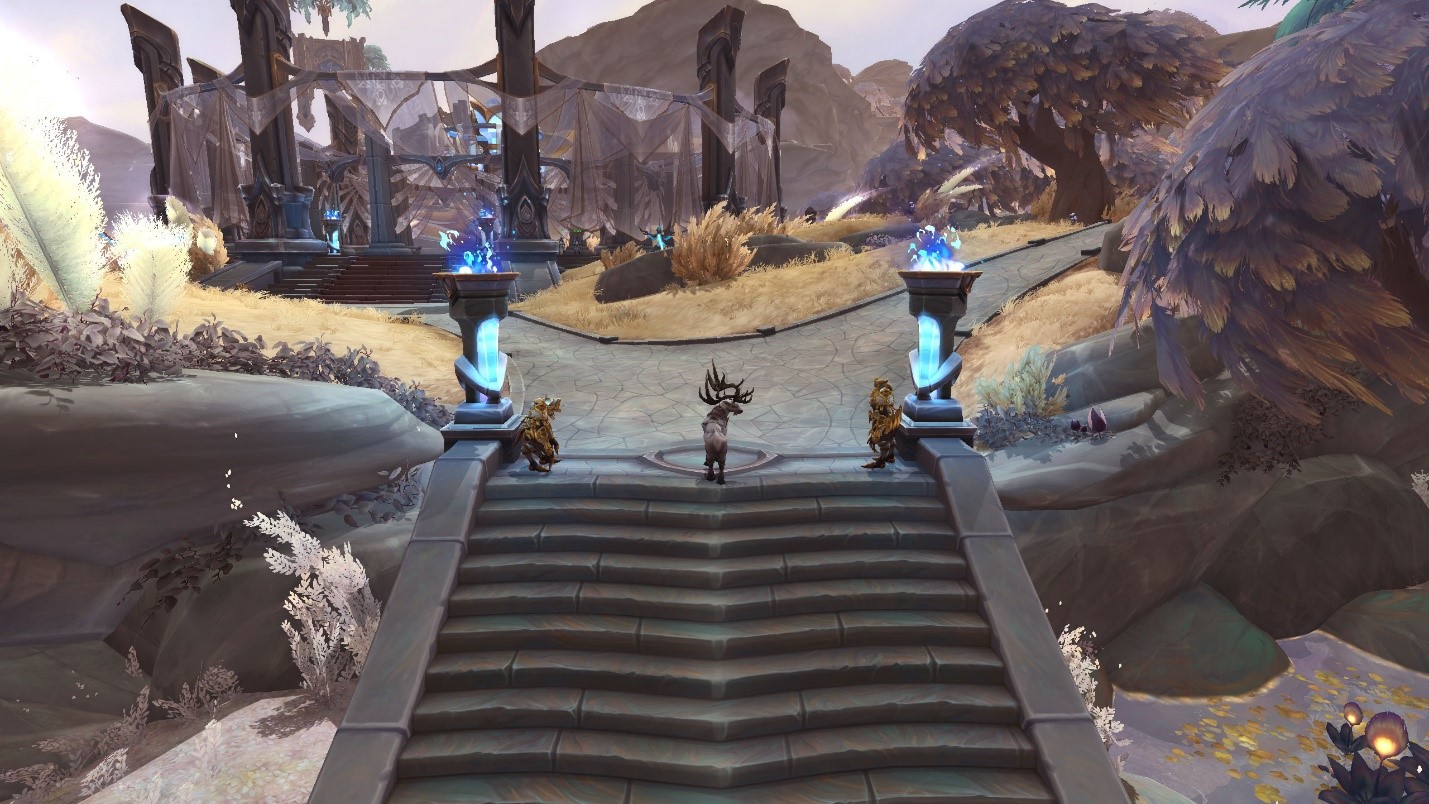 I wasn’t too excited heading into Bastion, because honestly, it’s the zone I’m least excited to see. Partially because I already played some of it at BlizzCon and also because it has a distinct Lawful Good feel, which just isn’t my cup of tea. That said, I’ve had a lot of fun working my way through the zone story, and there have been some real surprises along the way.

My only concern with it so far is from the various quest text and the way NPCs talk to my character it sounds like I’m fresh out of the Maw, which is a bit confusing. I mean, I know Blizzard said at BlizzCon when we first go to Shadowlands, we’ll be in the Maw and will need to escape. So, on that level, it makes sense. However, my understanding is we’ll be able to pick which order we do the zones, so I hope there’s alt text planned depending on what order a character does the zones. Taking away that option would be a huge mistake at this point.

Bastion itself is a beautiful zone. There’s a ton of detail in everything, and somehow everything feels like it is exuding light from within. It’s impossible to imagine it ever being full dark there. Dim yes, but not dark. The Kyrian’s themselves look even better than I remember from BlizzCon as well. Their wings are this whole shimmering blue that fades out to a light blue, which almost seems white in comparison. The entire zone is just full of beautiful pictures waiting to be taken, and I could happily wander around everywhere all day. 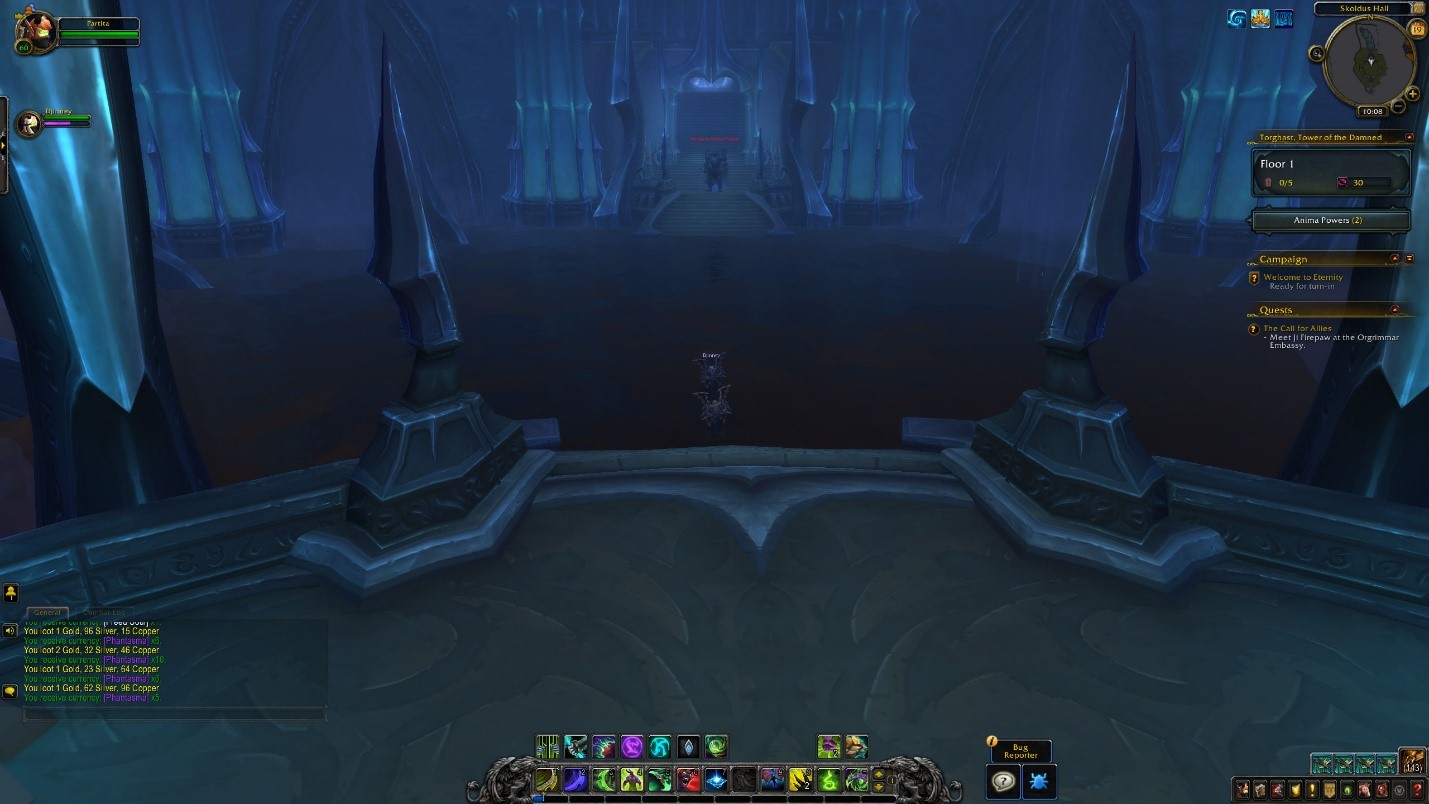 Torghast is easily my favorite part of the Alpha so far. It’s ridiculously fun and challenging but in a way that doesn’t feel oppressive or impossible. Currently, only five classes have access to Torghast, so I ended up going as a Demon Hunter, which I have some experience with but not much. It’s likely the classes are limited right now because they probably don’t have the class-specific anima powers for the other classes ready yet. Additionally, they probably wanted to get focused testing with these classes, and limiting options is one way to do that.

As much as I enjoy Mythic+, I was delighted to see there was no time limit on each floor. Instead, there’s a death counter where once all the deaths are used up, Tarragrue, a horrifying giant abomination, spawned and murdered us. This might sound terrible, but it’s pretty funny. First of all, the death counter scales with the size of your party. I was there with one other friend, and we were allowed five deaths on each floor. Once we did use those up, there was a timer of 30 seconds before Tarragrue spawned, which is plenty of time to get to the gate and portal out. It’s also possible to get stuck in an infinite loop of death if you aren’t paying attention and impatient… which is also pretty darn hilarious.

The other part about not having a timer that was nice is it allowed us to explore and experiment in the various areas without feeling pressured to go go go, all the time. Despite loving not having a timer, I wouldn’t be surprised if they did eventually implement one if only to discourage people from doing unfun things like waiting for hero/lust before every pull. Which, I guess is fine if they want to do that, but hopefully it’ll be generous enough so players can mess around and have fun without feeling like they have to skip over stuff. Honestly, though, I hope they leave off the timer. Just let people play how they want to; it wouldn’t break the game.

Another aspect which makes Torghast a ton of fun right now is I can go in there as much as I want to, which I would be shocked if it were the case when this thing goes live. First of all, Torghast is supposed to be the primary way we get the legendary crafting materials we need for crafting legendaries, and it’s safe bet how many of those we can get a week will be limited. Otherwise, we’d have people grinding their faces off to get all the legendaries asap, and those same people will complain about how terrible it is. Meanwhile, people who don’t have time to grind like it’s their job will complain they are now behind. So, safe bet Blizzard will limit the rewards from Torghast in some way. 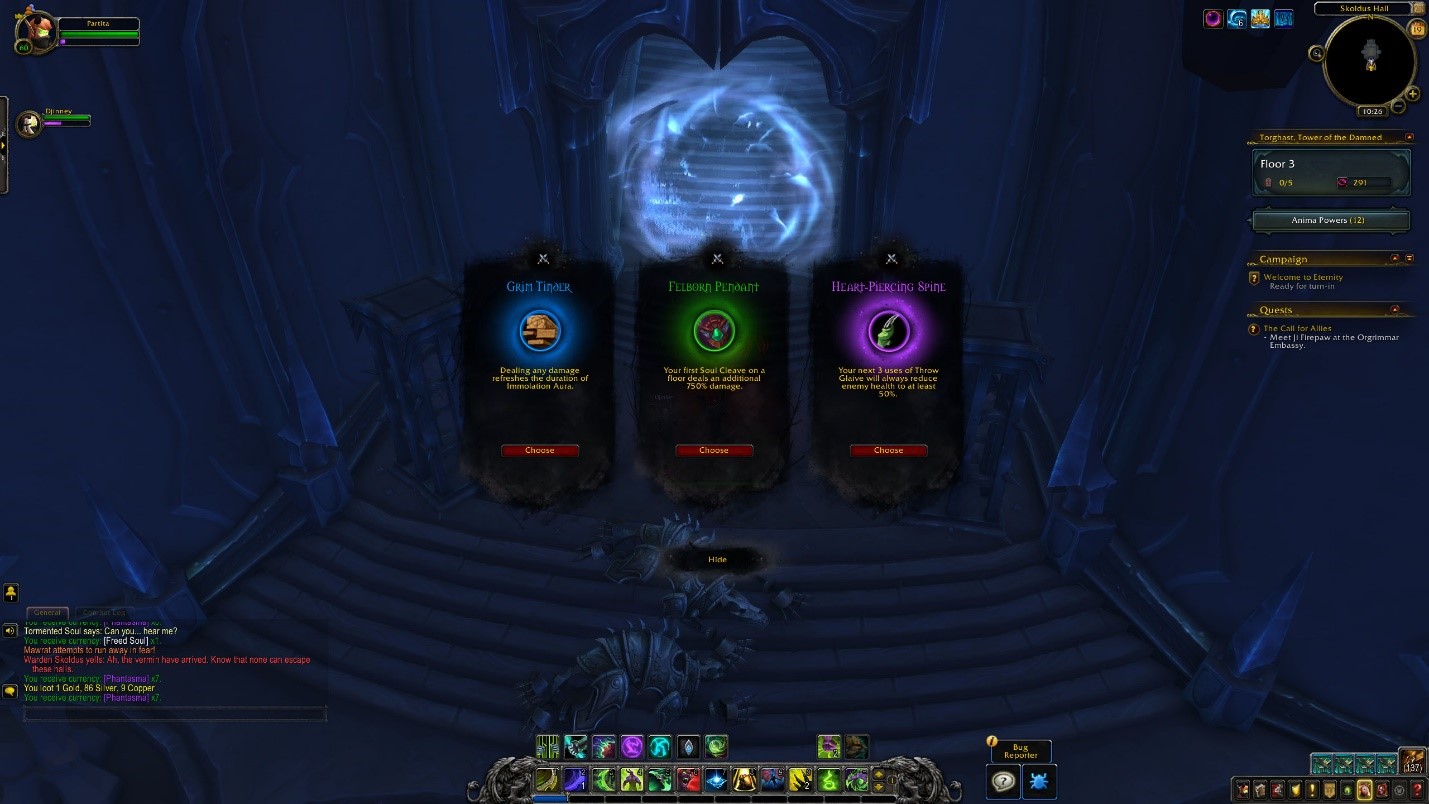 I’m also concerned we’ll have to farm up some currency to be able to buy some kind of key to get in every week. Which… although this would be the most likely set-up, I hope they don’t go this route. I love doing Horrific Visions and pushing to do more in them. I HATE having to do dailies to get the essences so I can buy keys. Pretty much anytime I have to do one type of content so that I can do a completely different unrelated bit of content is a negative for me. It just saps all the fun right out. It isn’t so bad right now because the amount of essences I get per daily has gone up so much I don’t have to do the dailies as much anymore. Seriously though, I hope they let us go in as much as we want, without farming up keys, and just cap the rewards. Please.

The downside of choosing to play a DH in Torghast is it was difficult to get a feel for how fun the Anima abilities were because I have a minimal baseline to compare them. That said, the powers offered were pretty cool, and I often found myself debating between the powers because they all seemed super useful. There was some color coding, but I’m not sure it did mean anything. For example, some powers would be grey, green, blue, or purple. But comparing them, it didn’t seem like purple powers were always better than grey powers. It may just be a matter of not having everything balanced yet. 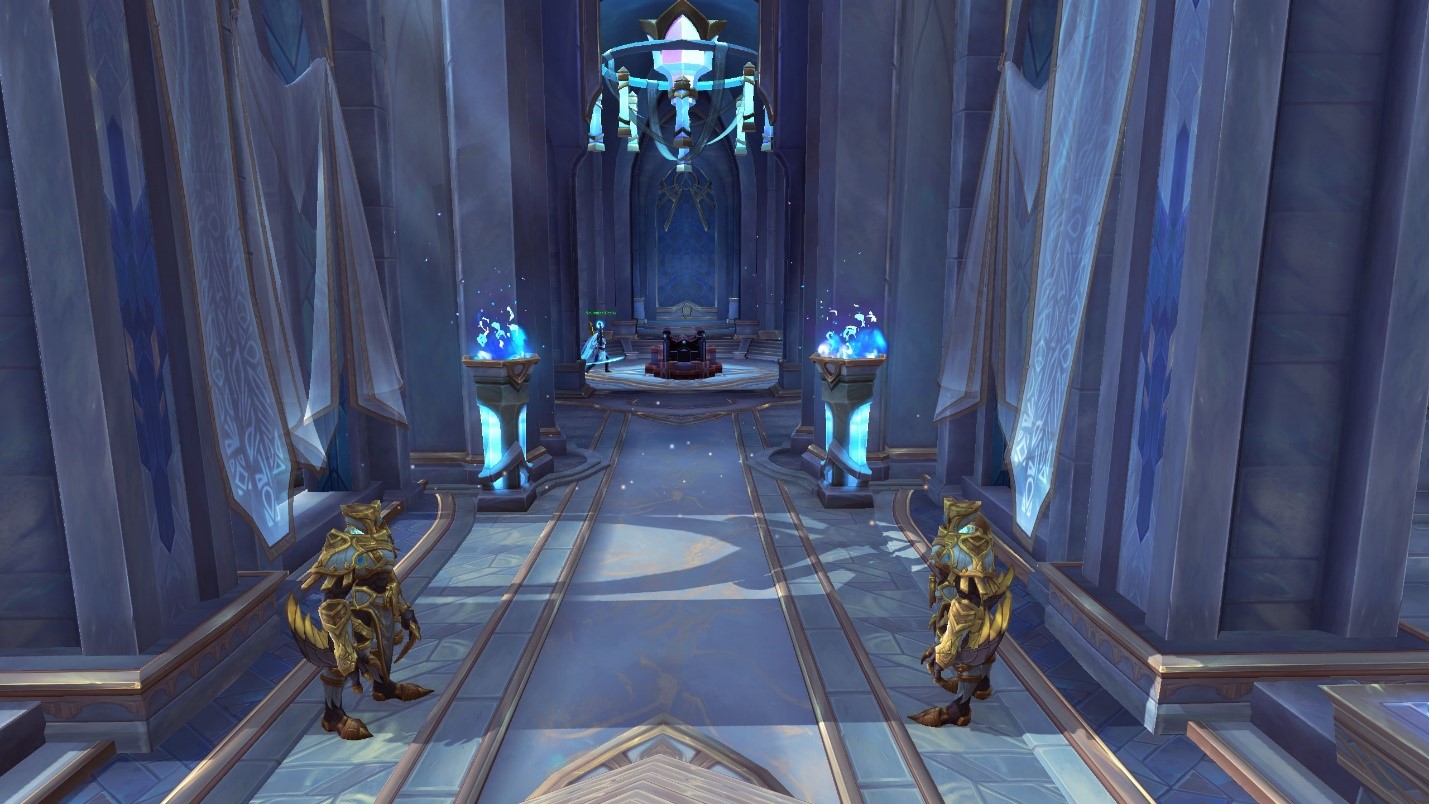 I’m mostly enjoying the Alpha so far, but it’s still early, and there’s still so much we don’t know about yet as far as how systems will work. For example, how exactly will crafting legendaries work? What limitations will be placed on them? All the questions about Torghast and how that will work in live. How smooth will the new leveling experience be? Right now, the level and gear squish seem to have gone well, but we’re limited in what we can do, so there may be problems out there which we haven’t found yet. I’m hoping it’ll go well, but we still have a long way to go.