Wild Terra 2: New Lands is an isometric, sandbox MMORPG in the vein of ARK or Rust meets Albion Online. Developed and published by Juvty Worlds, this is the fourth game to come out of the small 4-person indie team based in Russia. Currently, there is an Alpha testing period going on until March 1st and the developers were kind enough to provide us access during this time. So how is Wild Terra 2 shaping up? Join us and see what we think!

My first two hours in the Medieval-like fantasy world of Wild Terra 2 started off slow, as survival-based games often due, with some easy tutorial quests to get me learning the systems in place. My train of thought as my time was spent is as follows:

It’s like ARK, but isometric. The crafting menu is a little confusing. I like that I upgrade different crafting and gathering skills through using them, rather than having a character level that I get skill points to divvy out. I do not like that you can fail at crafting – which uses up all your materials.

Throwing spears at rabbits misses half the time. However, if you aim past them then you usually hit. I got a pet rabbit that follows me around. I don’t know where I found him, but I didn’t have him when I started. He got to level 2 – I don’t know how. Finally found other players’ houses – I still haven’t seen other players though.

Accidently ate some poisonous mushrooms – luckily did not die. In fact, it seems like the hunger system is negligible in this game. Found some other players finally. Someone started hitting me, so I ran away. Then he summoned a dragon, started riding it and chased me around. Not cool, bro.  Dragon-rider-san still could not kill me though, but he managed to get a good chunk of health down on me. No idea how to restore health.

Fast forward, my character seemingly heals over time naturally. Continued just following the startup quests that pop up – they keep multiplying. In fact, they are almost seeming to get a bit out of control. Some quests are extremely vague, like “Go to the graveyard.” Where is the graveyard? Is there a World Map somewhere that I’m missing? 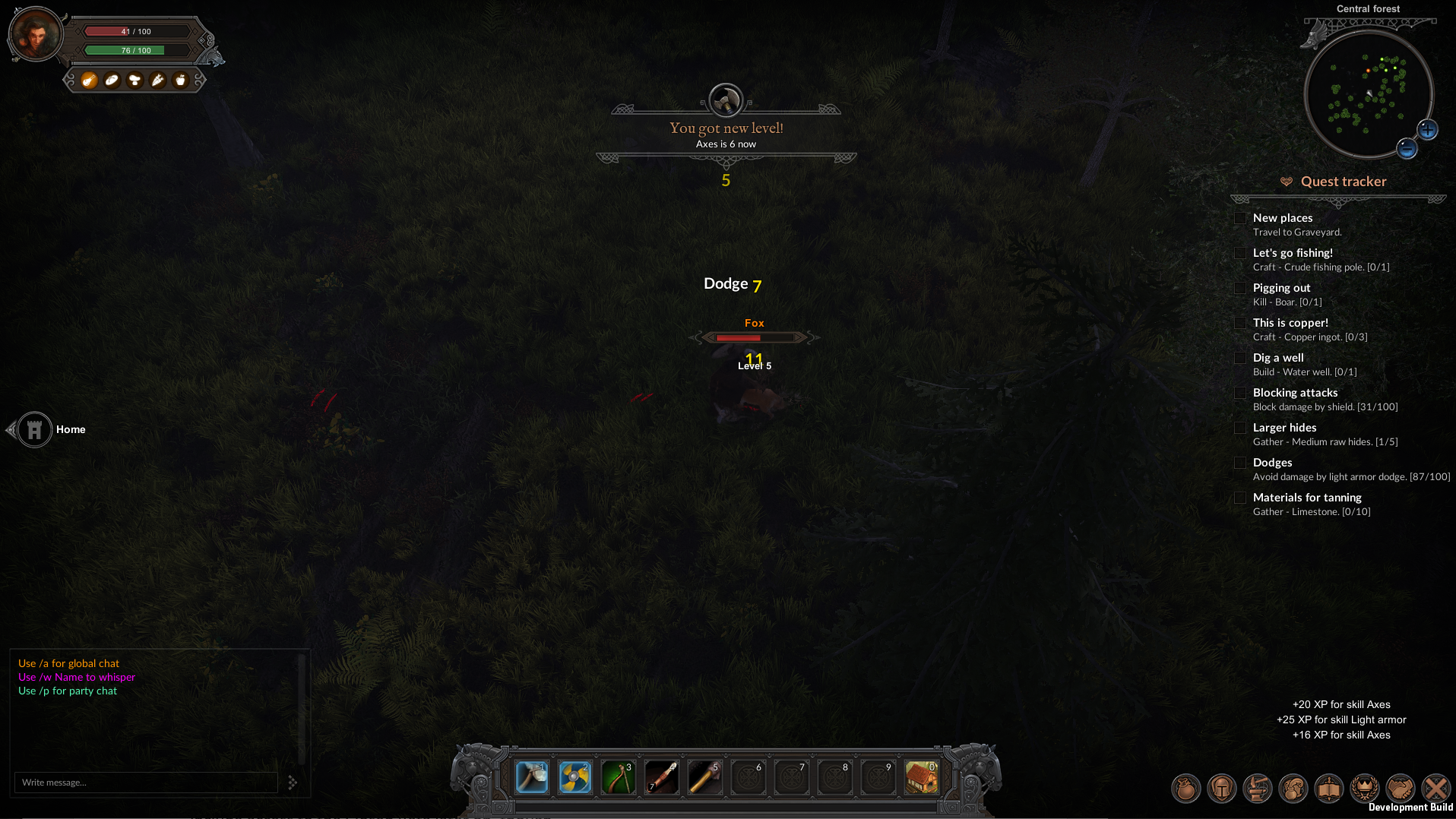 The hunger system is starting to bite me in the butt. I can not run anywhere, and hunting has become extremely difficult. My stamina seems to run out extremely quickly and my character is constantly hungry. I imagine that my stamina is always empty because my character’s stomach is empty too. But since I don’t have stamina to hunt rabbits or foxes, I can only forage for mushrooms – half of which are poisonous.

I ‘died’ a couple of times, which just turned out to be passing out on the ground and waiting 10 seconds to get back up. The boars that I’ve died to won’t attack me while I’m passed out though. I imagine that fighting with other players, or with more hostile creatures, will lead to actual deaths.

What Works, and What Doesn’t

As can be seen, my initial impressions of Wild Terra 2 were a mixed bag. It seems chaotic, and that’s because it was. There are a lot of new systems in place to learn, and a lot of it are just design decisions like the targeting system for killing animals. I wish that combat felt a bit more like an ARPG, like Albion Online or Wolcen: Lords of Mayhem does. I wasted half of my javelins and arrows because I right-clicked the creature to attack rather than clicking where it was headed. I do like the animal behavior though, where some animals would come fight back if I started attacking them and then run away when their health started getting low. Their AI made them feel realistic, rather than blindly fighting to their death.

Additionally, the crafting systems can seem extremely overwhelming in the beginning. Luckily, there’s a search function to be able to type in what I wanted – like ‘arrows’ or ‘copper’ to be able to narrow results shown. But having almost all of the crafting recipes available right at the start made me feel like there was no progression system outside of grinding recipes to level up the different crafting skills. It would have been a better system in my opinion to unlock different tiers of recipes as I leveled up those skills, rather than having them all at once. Something like: “Hit level 10 in Masonry - congrats, now here’s a bunch of new recipes to try!”1

It All Comes Down to Commitment

Inevitably, for Wild Terra 2 it all comes down to how much time you’re willing to invest in it. After spending about 10 hours with it this weekend, I still feel like I’m only scratching the surface of what Wild Terra 2 has to offer. Partly because of how much there is to craft, but mostly because of how long it takes to level up each crafting skill. I managed to upgrade my house, build almost every beginning structure, and finally managed to kill a boar. But I have yet to craft a furnace because my masonry skill isn’t high enough, and it wastes so many resources every time I fail. Because of this, I haven’t even dived into smelting ore and forging higher tier equipment. 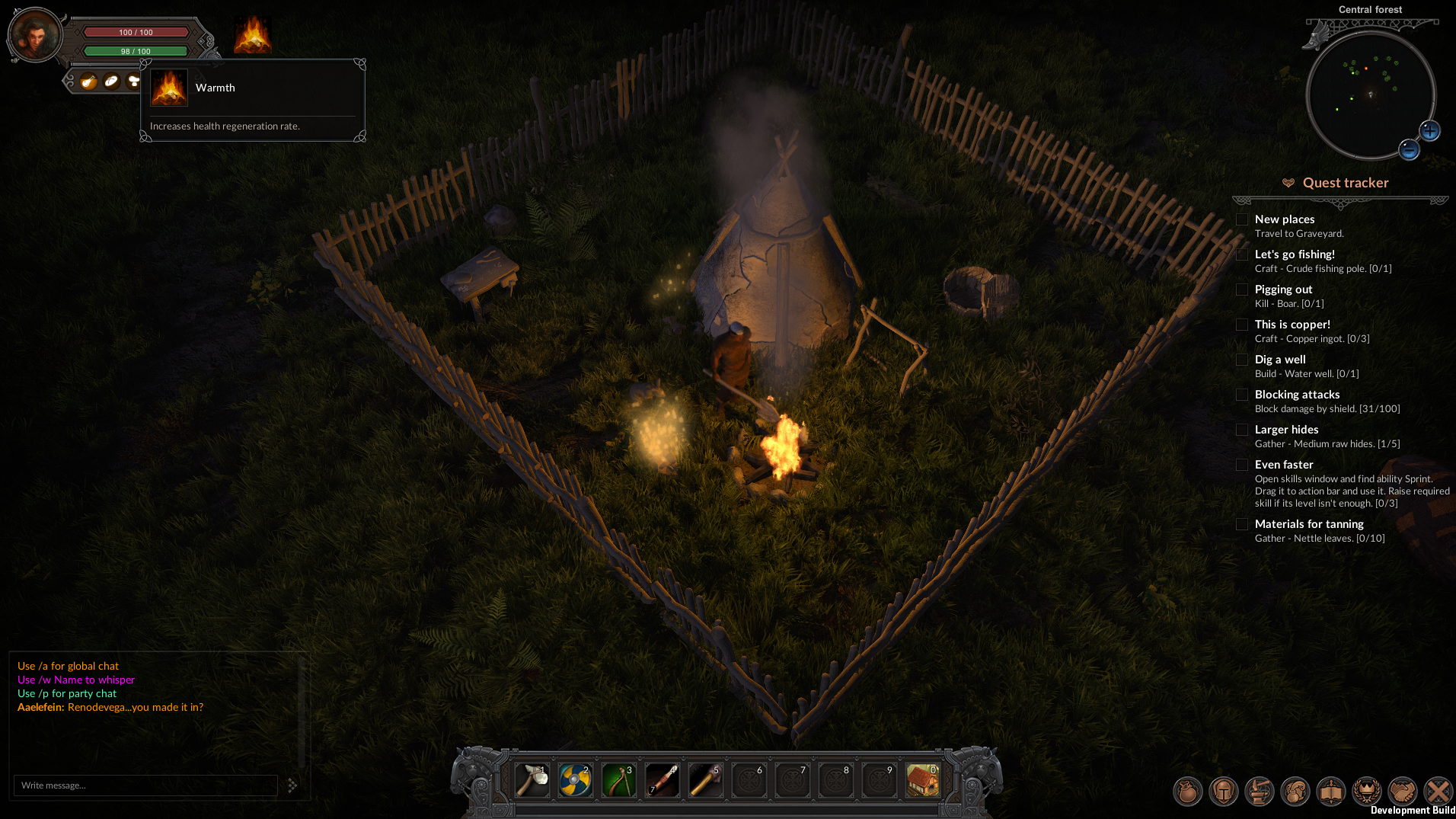 I like how little that Wild Terra 2 handholds in the beginning, aside from the tutorial quests. It is definitely aggravating starting out, but every time I learned a new system or discovered how to use a new crafting station – like the leather vat – it gave me a sense of accomplishment that few games give right now. I only wish that leveling up skills went faster just so I could discover more of the overall game.

I do think the scope of the game is a little small currently. All I saw was the starting ‘tutorial’ island, but I know there’s more beyond that, I just don’t know how much more. Currently, the alpha has about 16 creatures to hunt – including animals, monsters, and bosses – and even has a mount system and taming system which I haven’t gotten in to yet. I still haven’t even seen half the monsters to fight, and I didn’t try out the fishing yet either. So even for an alpha, there’s plenty to see and do.

I think that Wild Terra 2: New Lands is an impressive feat for such a small studio, and I hope to see it grow into something great. For fans of open-world and survival games like Subnautica or The Forest, this is a title that I would pay close attention to throughout development this year – especially if you’re wanting a old-school isometric experience. For most people, I would probably suggest waiting to see what else gets added or changed before committing with your wallet. There will be plenty more opportunities to check in between now and its official launch.

Wild Terra 2 will have a closed beta test in the second quarter of 2020, and a paid Early Access on Steam planed before the end of the year. For now, interested players can head to the official website and pledge at the Conqueror Pack or above for access until March 1. The much cheaper Settler Pack will include access to the Closed Beta launching in either May or June, and the Builder Pack includes the base game and a 48-hour early access for only $29.99.