Warframe is setting up for one of its most anticipated and ambitious stories yet when The New War releases later this month. After being teased for years, the upcoming content for Digital Extreme’s free-to-play MMO will let players step into the shoes of some new characters (in addition to operating as Tenno) to experience the war firsthand. And while The New War unfolds, it sets the stage for 2022 and beyond as Digital Extremes looks to the future of their world post-New War in the years to come.

The New War itself is the largest story expansion to come to Warframe since the MMO’s launch in 2013. Set as Tenno’s are tasked with defending the Origin System from the Sentient threat, DE promises to take players on a ride that will see Tennos overcome an emotional story full of ups and downs along the way.

While at TennoCon earlier this year we saw some gameplay, during a press preview last week, Digital Extreme’s Rebecca Ford reminded press that the gameplay shown was never actually from the perspective of the Tenno. Rather, the gameplay that showcased some of the first real in-game glimpses of the cinematic story were told from the perspective of some of the playable characters that are central to The New War’s plot.

Players will see The New War play out from the perspectives of Kahl-175, Veso, as well as Teshin as they aim to uncover the motives of the once companion and mentor to the Tenno, The Lotus. As previously revealed the upcoming update will add to the existing 30 hours of content - for free - continuing the story for players.

In the preview event, we saw some gameplay from the early stages of The New War, seeing a massive space battle with the new Frame, Caliban, controlling a Railjack. Onboard was Teshin, one of the upcoming playable characters whose perspective will tell the story of The New War, helping the Tenno along. It’s clear that while these new characters are a focus for storytelling, Digital Extremes wants to make clear that you’re Tenno will also take part in the action in the ongoing conflict.

The action unfolds as the Railjack-pilot is dogfighting with plenty of Sentient ships in the system, though when the ship I boarded, the Tenno dropped the reigns of the ship in order to defend it from the inside. The crew of the Railjack, as well as Teshin himself, got in on the action, and we got to see the new Warframe in action for one of the first times.

Speaking of new Warframes, The New War brings with it the latest Frame to join the roster: Caliban. This Frame is actually a Sentient-Warframe hybrid, built from the wreckage of the Old War. Caliban marks Warframe’s 48th playable Warframe, its passive Adaptive Armor gives allies within Afinity range increased resistance to the very type of damage being dealt to them – pretty cool when you think about it closely.

Additionally, the Hybrid Frame has some cool gravity-defying moves, such as Sentient Wrath. This new skill shoots out a wave in a cone in front of the player, killing some and lifting survivors into the air, ragdoll style. This makes them easy prey for the Tenno and their allies to finish the job.

Another new skill with Caliban is Razor Gyre, which sends the Tenno into a deadly spin, rushing towards helpless enemies. The Gyre also synergizes with Sentient Wrath, causing affected enemies hit by Razor Gyre to create a huge blast.

The Hybrid frame can also summon Sentients with Lethal Progeny. These comrades can deal damage and even restore your shields in a pinch.

Finally, Caliban has the skill Fusion Strike, which fires out three beams of energy which converge on a point, exploding once that happens. Anyone caught in the explosion but not quite killed will see their armor stripped from them, making them easy pickings. 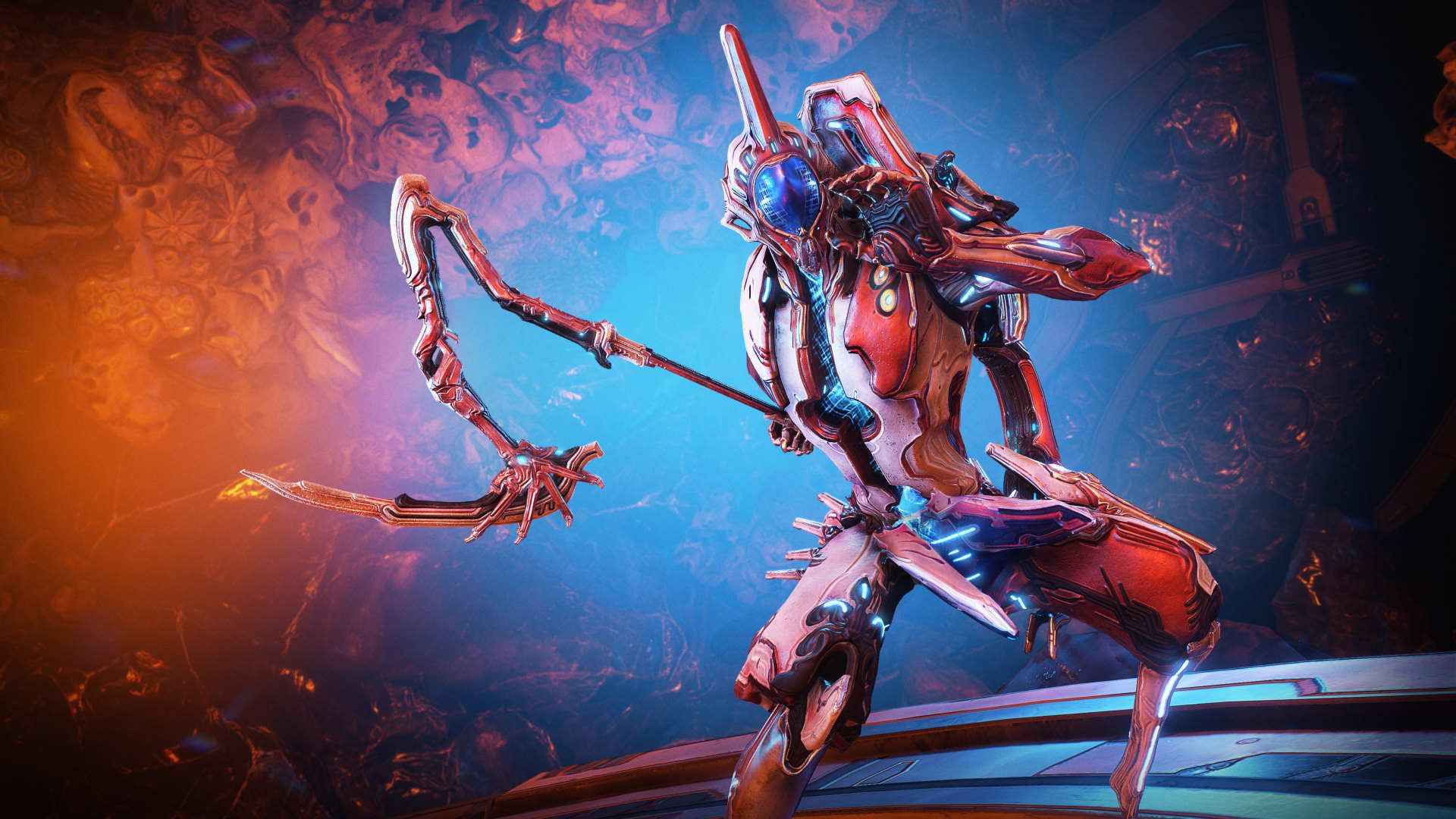 As with all major updates in Warframe, a new Prime Access Frame is being introduced with The New War. This time it’s the Harrow Prime Warframe, bringing some serious firepower with the Knell Prime Pistol and Scourge Prime speargun.

Going on now ahead of The New War, Warframe is seeking to help players catch up and get into the action when The New War launches on December 15th. This is through the Prime Resurgence program, which sees players able to build up their arsenal of Prime Warframes on a weekly rotation. This is through in-game currency called Aya (or you can just buy your way into the Prime Frames through premium Regal Aya). It’s an interesting way to get players prepared for what’s to come in The New War, as well as a goal for newer players who have just recently jumped into the Space Opera to get some great Warframes for their collection.

Indeed, ever since last year’s launch of the next-gen versions of Warframe, as well as complete cross play and cross progression in the MMO coming next year, Digital Extremes seems poised to carry their MMO into the next decade. It’s been just over eight years since Warframe launched and The New War has an air of a new beginning of sorts.

This is something Rebecca touched on in the press presentation. 2022 and beyond is set up with the expectation that players have completed The New War Cinematic Story and are venturing into a new era of Warframe it feels. One where story arcs will be resolved, yet more will be opened up to the player in the coming months and years of Warframe.

It’s exciting to see, and the culmination of teases and storytelling for years. Since that initial tease back at TennoCon 2018, players have been looking forward to what The New War will bring, and soon that wait will be over as the next chapter in the Warframe story will hit on December 15th across all platforms simultaneously.