Over the next few months the updates to Warframe are going to be coming at a regular pace. Life, in general, has slowed down as we try to flatten the curve. All our lives have been affected in one way or another and the Warframe development team is not immune to how COVID-19 has changed our lives. On April 24, 2020, the Warframe Devstream moved to an out of office experience. While the information on the devstream was important, it was clear the team was not themselves.

From the start of the devstream we watched members of the team talk about what they have been working on while in quarantine for the last five weeks. It is hard to believe that only five weeks have passed. At the end of the segment, we could see the team missed the interaction with each other. It is hard times and it is hard to feel apart of a whole team when the team is segmented because of a virus. The Warframe is pressing on though and we can plan on seeing more and more updates as the months pass. Here is a quick rundown of what we can expect from Warframe in the coming months:

More changes to Railjack like we saw with Update 27.4 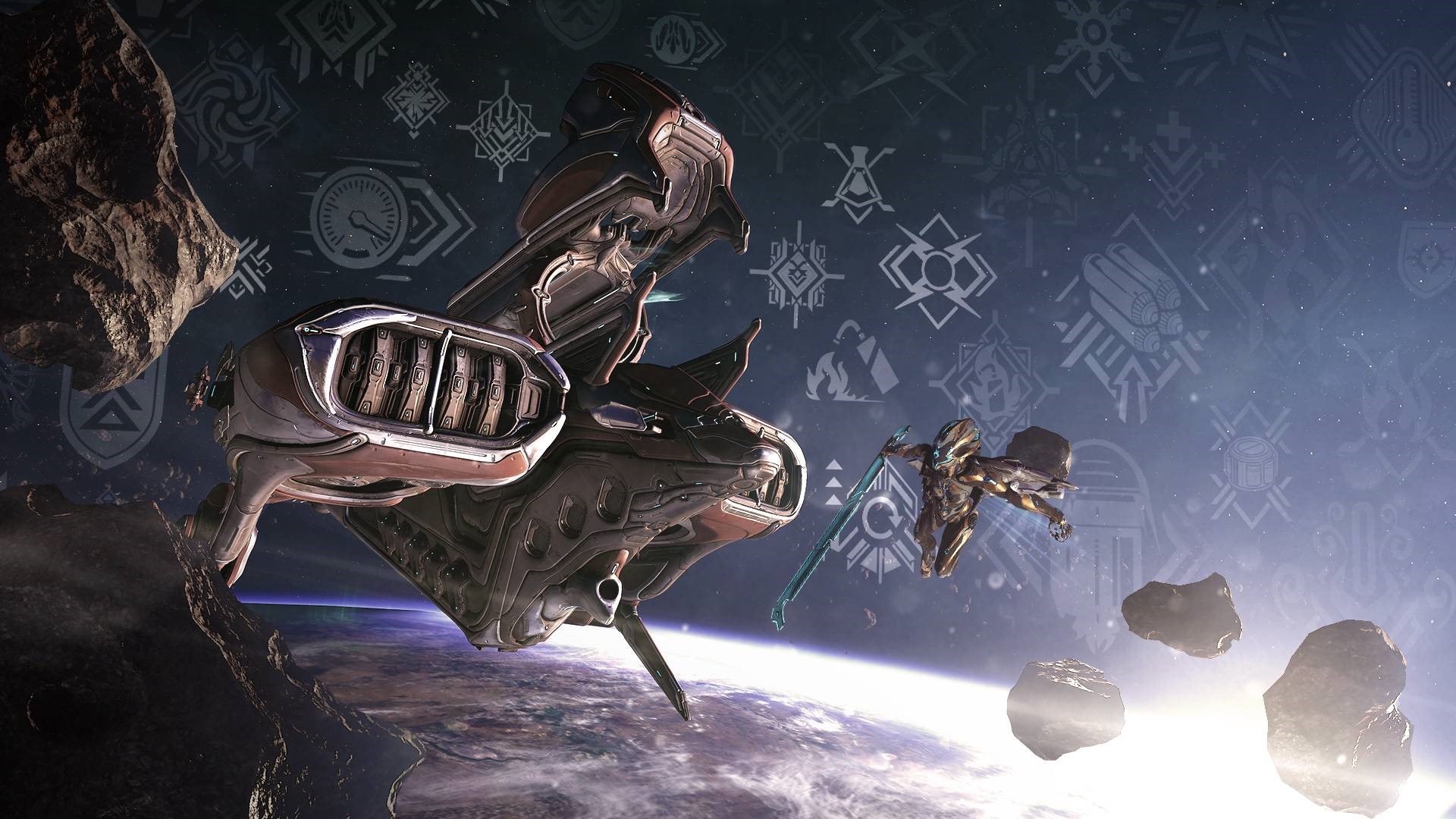 Looking over the vast amount of changes in Railjack Revisited, we can see that the pacing of Railjack is becoming more on par with how Warframe feels as a looter-shooter. The initial phase of Railjack came out at the end of 2019, and it felt a bit off on what we are used to as a fast-paced space ninja. We now had the “wide-open” space part of the space ninja, but Railjack felt a lot like Achwing did when it was first released. It felt like a great concept on paper but did not fully fit in how we normally play Warframe daily. Because it has only been a couple days since the changes to Railjack, I am unable to fully capture how the feel of the gameplay has changed. With the little amount of time I have spent in Railjack missions since it released in 2019, I can tell the pacing is better and the achwing gameplay feels stronger than it did before. I believe they are good changes to Railjack and I can’t wait to see how the game mode evolves over the next few months.

The first new Warframe of 2020, Protea 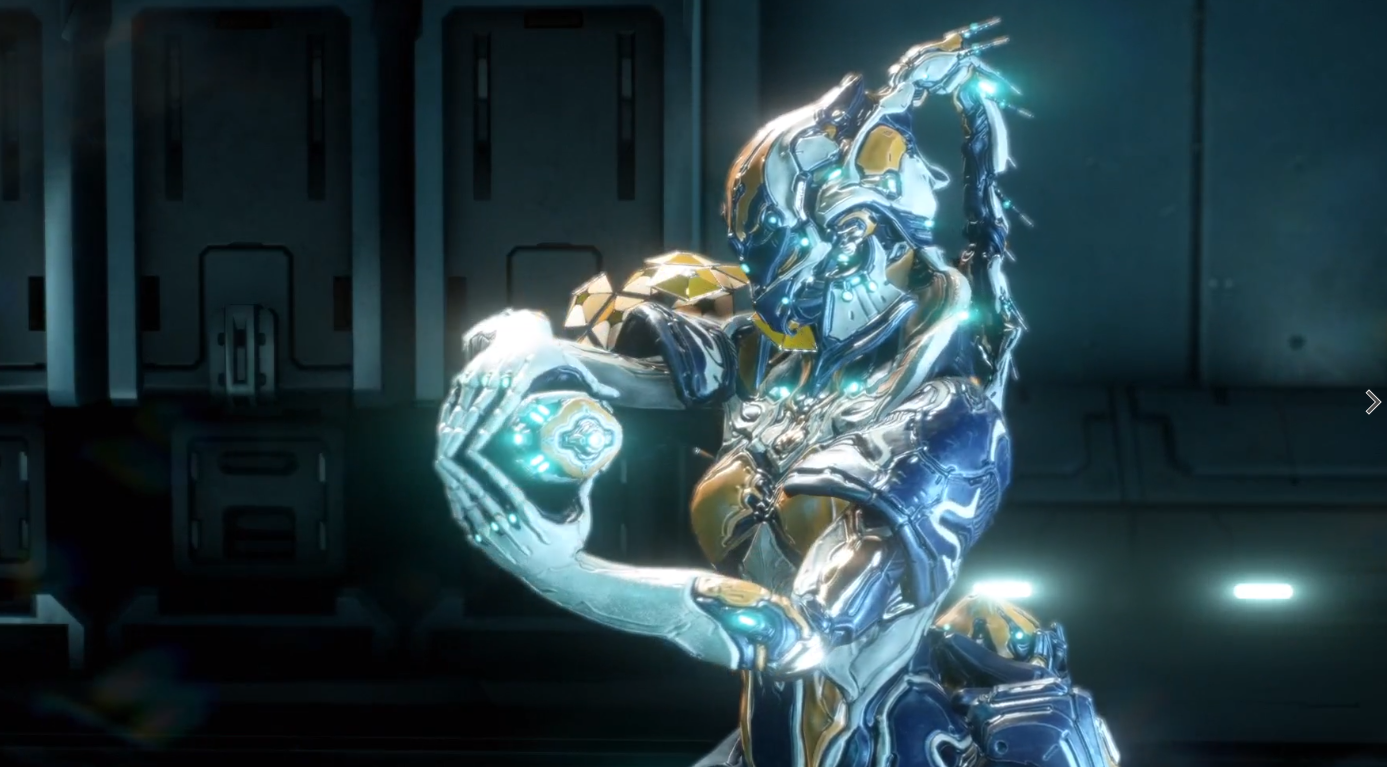 The heart of Warframe is the Warframes. I always look forward to a new Warframe to try out even though throughout the years I’ve mainly stuck to Rhino, Nidus, Wukong, and Mesa. I’ve owned every single Warframe and each time a new one comes out I get excited to try it out. Even though Protea looks like she plays a lot like Wisp with some of the abilities, I am intrigued by her fourth ability, Temporal Anchor. Temporal Anchor gives Protea the ability to use all of her abilities with the cost restored upon the deactivation of her fourth ability. Even though her other three abilities appear to be new takes on other Warframes’ abilities, Temporal Anchor seems very unique. 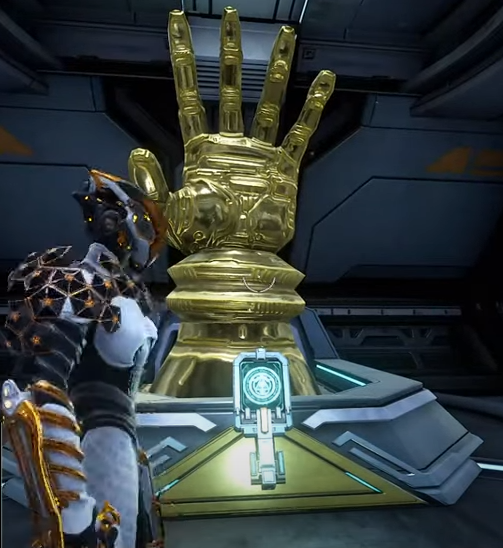 I’ll give the new Corpus ship tileset a high-five! With the new tileset update we are going to get a new mode that uses Greed Tokens to activate a purgatory. So far there are three different purgatory modes, regular, extended, and nightmare. The Devstream showed about 1 second of this new mode. You can check it out at the Working From Home Devstream with the time stamp of 1:07:30 to 1:08:30.

Series 3 of Nightwave called The Glassmaker

The Nightwave “battle pass” series is not only a great way to earn items and cosmetics, it tells a story we would not normally get in the game. The Nightwave series gives us insight into the past, present, and future of Warframe. The new series called The Glassmaker will add a new investigative mode to the game where we will have to solve a murder. As many things as I’ve killed in Warframe, I hope I’m not the murderer. 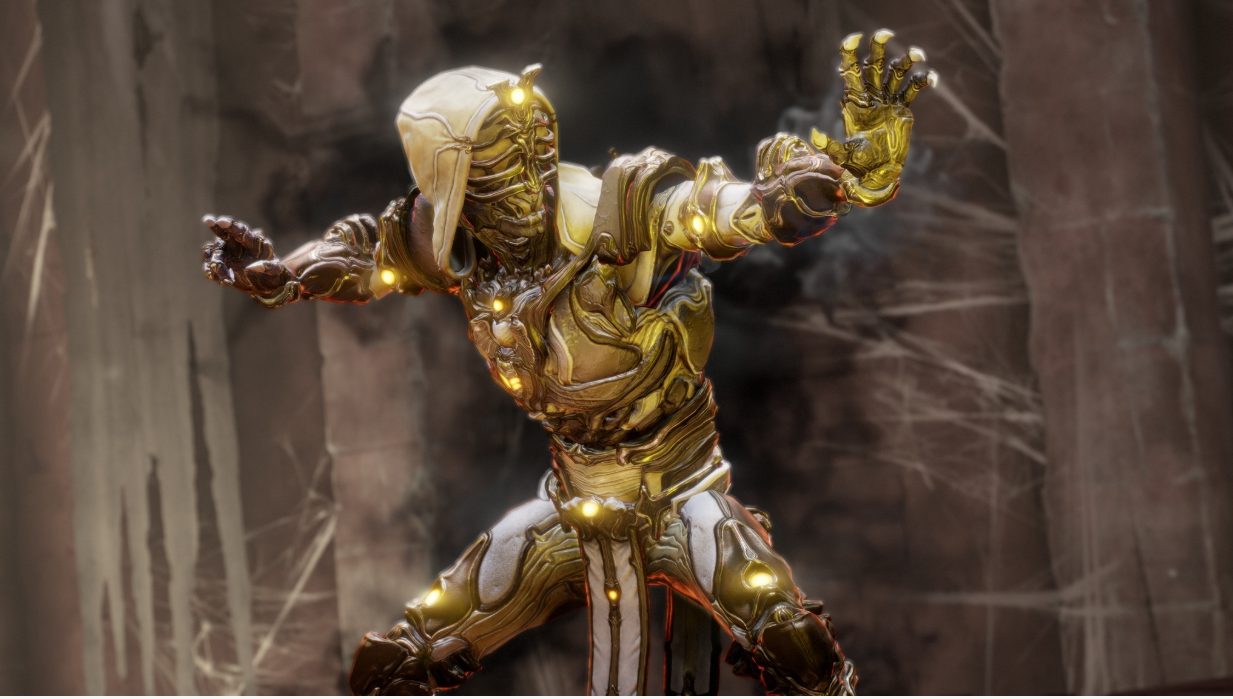 I love Ash and he is my main stealth frame when I do spy missions. The new deluxe skin is a must buy for me! I do not know when this will come out, but I hope it is soon!! 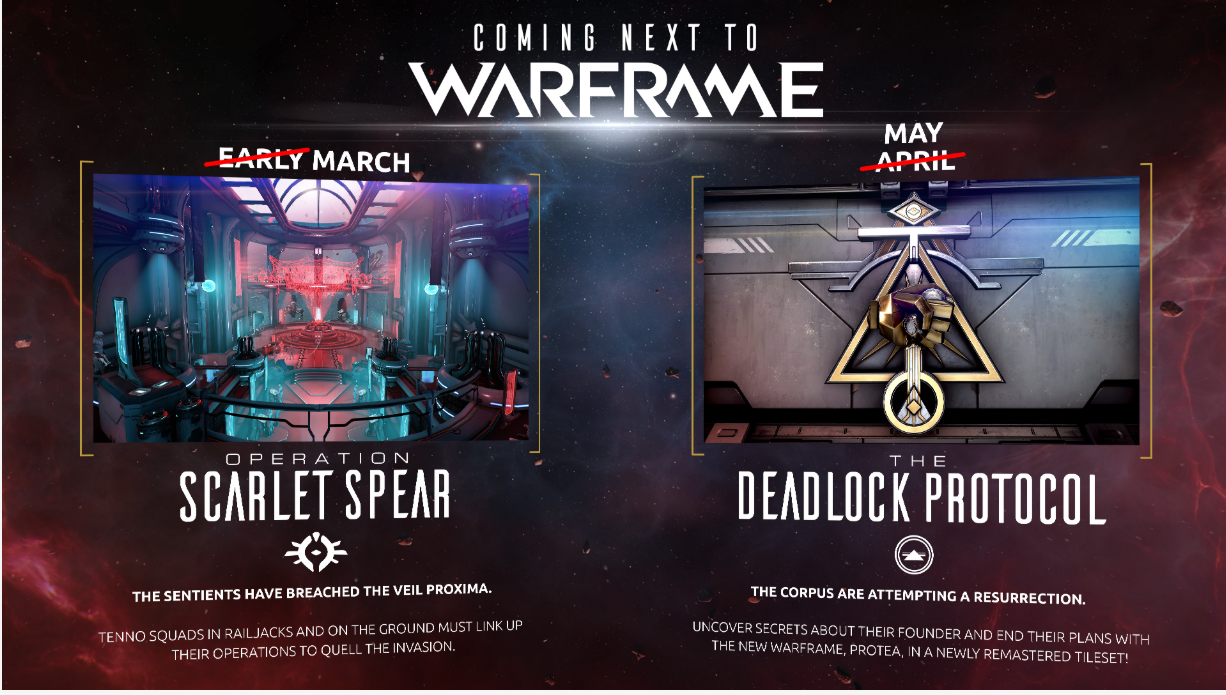 Events in Warframe might not be the main focus of the game, but they do help draw players together. More than ever, we need to draw people together. Because of what is happening in the real world, a lot of the major event updates in Warframe have been delayed. We saw Operation Scarlet Spear move from early March, to sometime in March. We were expecting The Deadlock Protocol in April, but it looks like it will be sometime in May. I am hoping now that it is May, May means early May. I’ll accept the whole month of may though. 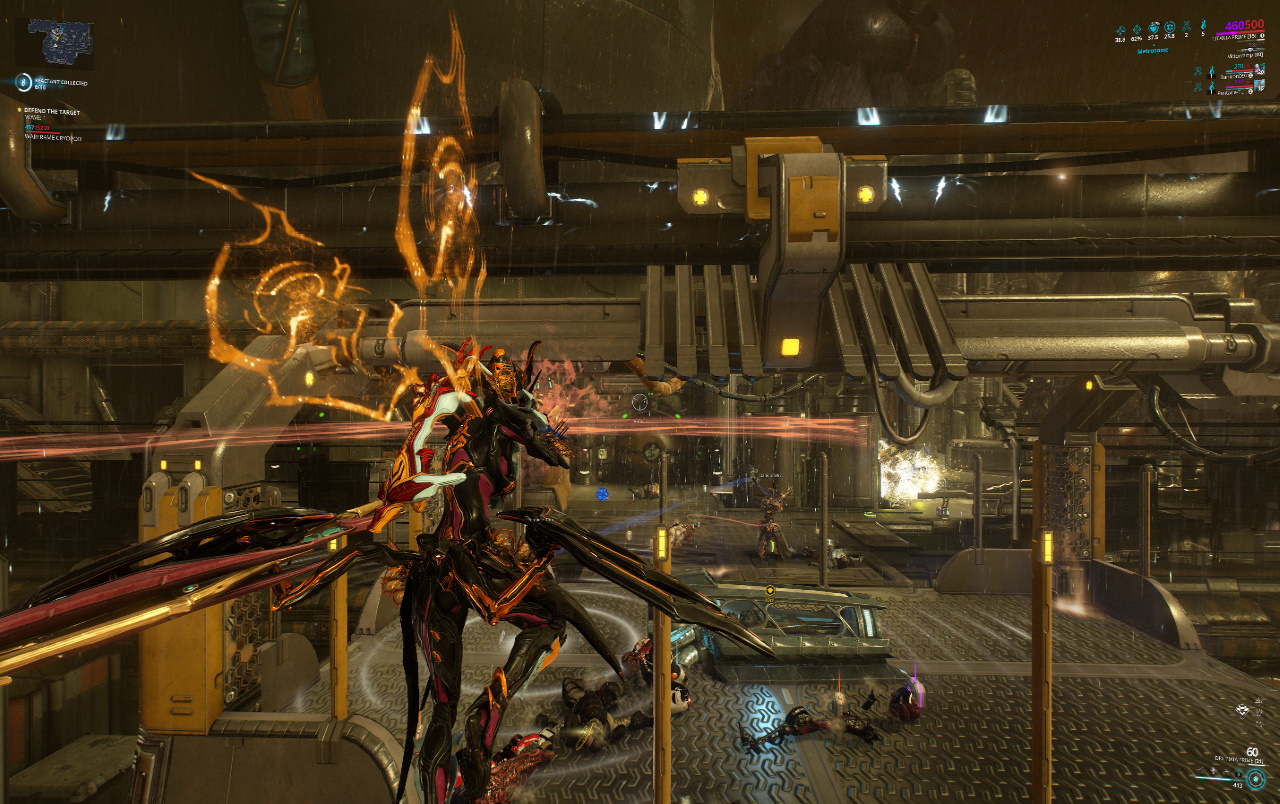 Lastly, I got to talk with Digital Extremes last week and wanted to know more about what is in store for the digital TennoCon. The good news is, it sounds amazing in a general sense of announcements. The bad news is, you’ll have to wait to find out. When asked if I want to know the “NDA” future of Warframe, I said no. First and foremost, I am a die-hard fan of Warframe. Every year I get to go to TennoCon I feel like I won the grand-nerd lottery. Yes, I have to work while I am at TennoCon, but the whole time my heart is skipping beats of excitement like any other fan there. When I am sitting in the event center and the developers announce their plans for the next few years, the energy in the room explodes. The developers thrive on that energy and every year I am amazed at how intoxicating TennoCon is. Unfortunately, I do not see how that energy can be recreated for the developers over the internet. The face-to-face human interaction is not something that is easily recreated digitally.

A selfish part of me wants to hold on to the surprise of TennoCon and that is why I did not want to know their big announcements. Even though I cannot help the developers feel my excitement from my home, I hope to convey that excitement when everyone has the chance to watch TennoCon digitally this July. More than ever we need to express our gratitude in a positive way over the internet so we all can connect and feel the joy in our lives. Warframe brings me a great amount of joy and I hope that the digital TennoCon is just as amazing for the developers as it is for the fans like me.