When Tribes of Midgard was released last summer, I ended my review believing that Saga Mode provided a fresh take on the survival genre but lacked any long-term hook to keep me playing. I was spot on with that assessment and quickly tired of the gameplay. When Season 2 dropped, I checked it out (and liked it), but again, there wasn’t anything significant to hold my attention. Now, with Season 3, we are getting more than just another Saga chapter. This go-around, we are getting a completely (sort of) revamped Survival Mode. Season 3 also marks the arrival of Tribes of Midgard on Xbox Series X|S and Nintendo Switch. I don't console much, so I fired up ToM on PC to check out the new Survival Mode 2.0 and all the other Viking goodness developer Norsfell has added with the Season 3: Infernal Saga-Survival 2.0 Update.

Before we get into the changes with Survival 2.0, it’s important to note that Norsfell didn’t completely forget about the players who enjoy Saga Mode. Just like the seas of Season 2, there is a new biome for players to explore and conquer. This time around, you’ll be entering the Volcanic Spire Biome. Spears have been added to your arsenal of weapons, and they could come in handy as you defeat the new Saga Boss and his followers. You’ll also reap the benefits of many other quality-of-life improvements shared with the revamped Survival 2.0. Still, you’ll probably be too busy heading to the new biome to notice anyway.

For me, though, the main attraction of Season 3 is the revamped Survival 2.0 (henceforth known as Survival) and all the changes it brings. For those who don’t remember the original Survival Mode (it was forgettable), it was just an endless Saga session. Survival now has slower-paced gameplay and is similar to any other game in the genre.

You start your journey just like you would in any other survival ARPG - defenseless. Gone is the village that protects the Seed of Yggdrasil, with only veteran Einjerjar, Eira Foot-Crushed, stationed nearby to protect the Seed from evil. Besides a few fundamental changes, Survival works much like a slower-paced Saga Mode. You will still be running around collecting resources, raiding enemy settlements, and defeating Jotnar.

While the days of Survival last longer than before, nighttime is still full of danger, possibly even more so than Saga mode. Helthings still come out in the dark, and without a village to attack, they no longer make a beeline for the Seed. They spawn randomly across Midgard and will attack you on sight. This is a significant change to the gameplay that focuses on slow exploration instead of the rapid hunt for resources before you jump back to town for a session of tower defense.

The Jotnar and Saga Bosses also get a makeover for Survival. Instead of meandering across Midgard, the Jotnar are confined to arenas spread across an expanded map. Players no longer have to rush to stop their advance and can take them on as they see fit. As for the Saga bosses, in Survival, they are called Ancients. By defeating each Ancient, players will earn epic rewards that will aid them in their continued success in Midgard.

Without a village, it is up to you to do all the building and crafting, starting with the placement of your Allforge. The Allforge isn’t a one-stop shop for everything you’ll need to craft, but it is required to build all the other crafting stations you’ll need to craft your gear and build a base. Other than the addition of the Allforge, the rest of the crafting stations work much like the villagers, except you’ll be doing all of the crafting. More powerful gear is still attained by upgrading the stations, and you’ll still have to search far and wide for rare resources.

Even though it is likely that you’ll build your Allforge near the Seed of Yggdrasil initially, it can be built anywhere you’d like. And although you can only have one Allforge at a time, placing it down doesn’t cost resources. That may not seem important initially, but the Allforge is used for much more than placing crafting stations. Since it is used as a repair station for your gear, you can explore the world without the need to return to a central base to mend your armor and weapons. It is also used to craft a bed as a respawn point, bonfires to keep you warm in icy conditions, and portal shrines for fast travel spots.

The most significant change for crafting is your ability to create and mold your base however you like. Base building is always an essential feature in survival games, and the removal of the village and tower defense in Survival puts Tribes of Midgard in line with the rest of the genre. I was excited about this change; unfortunately, it has been a letdown.

The overall concept is decent enough. When you enter build mode, you can place floors, walls, roofing, stairs, and other building pieces. Placement is done on a grid, yet it is still tricky to physically line up pieces where you want them. You are only able to place items within the immediate 9x9 grid around your character, and objects such as walls will often snap to a spot other than the one you are trying to use, leaving you to slowly move your character around while you are hoping your pointer will collide with the grid spot you need.

Placing an item at ground level is difficult; hitting the right spot above or below your character’s horizontal plane is outright frustrating. You can rotate the camera in 90-degree increments, but you are still locked into the same static position above your character as you normally are. You aren’t able to lower or raise the camera position or hide any vertical layers. Instead, only a small sphere around your character becomes transparent, making it even more challenging to correctly position new additions to existing structures. 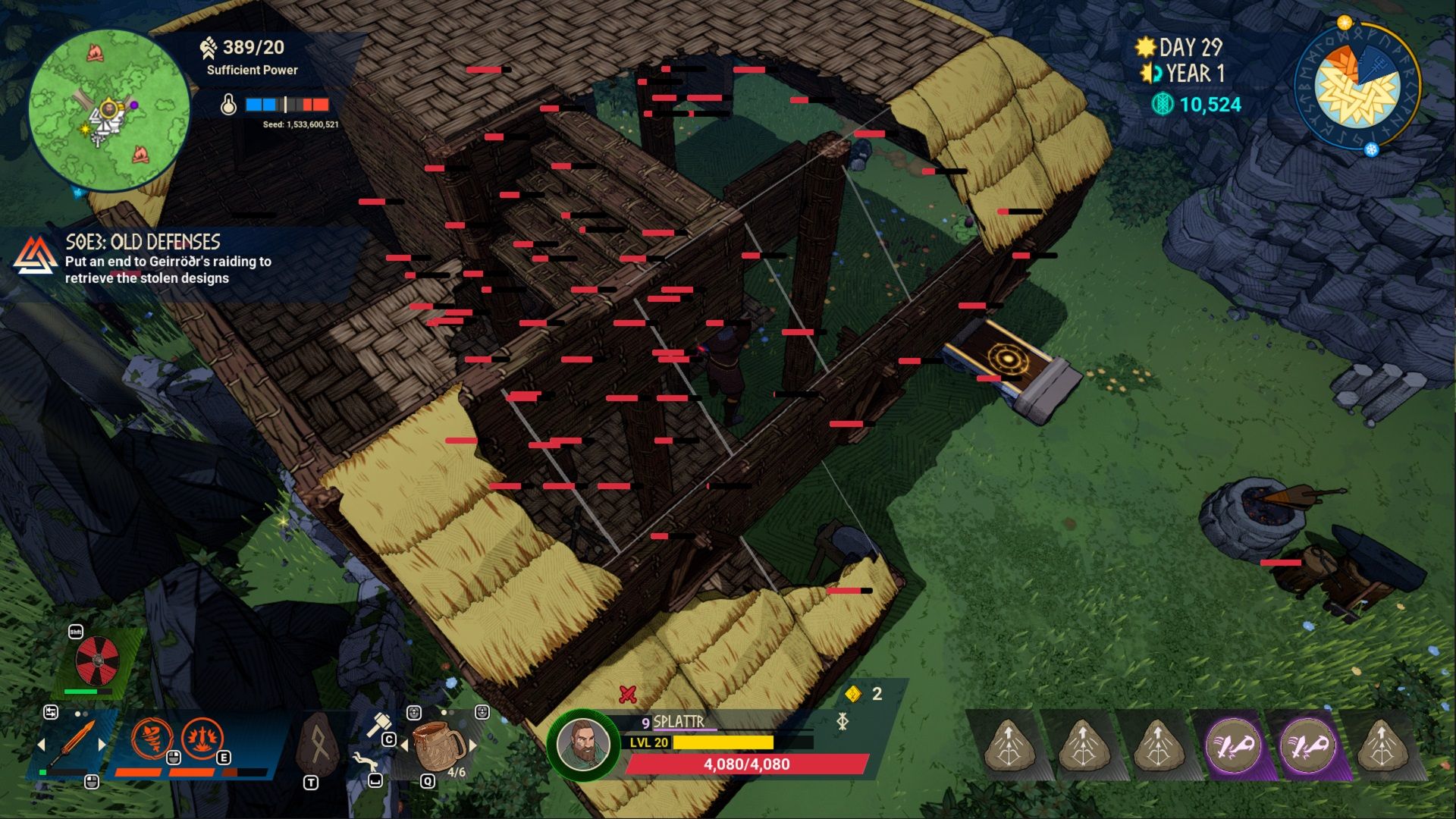 Deleting placed items is more work than it needs to be. Instead of targeting single items for deletion, an entire cube of the grid is targeted. Removing a wall will also delete flooring and possibly adjacent walls. Fortunately, any resources used to craft an item are recouped, but you still have to recraft and replace any structures you incidentally destroyed.

If you’re willing to take the time, the resulting buildings are decent enough, if not a little generic. Given enough resources, you could build a large structure. However, you are limited to building only five squares high, so creating something awe-inspiring is highly doubtful. And any aesthetic satisfaction of a well-built building is lost as soon as any creature attacks it. Each piece of a structure has its own hit point pool, and once it takes damage, a hit point bar pops up on the screen for each one. And figuring out exactly which piece of your building needs to be repaired is painfully difficult that I finally abandoned building anything other than my crafting stations.

Along with the other changes, players will have a new progression system for their characters in Survival. Instead of choosing a specific class, players will pick Blessings from a skill tree. The tree includes 90 Blessings and allows players to mix and match skills from all of the Saga classes as they see fit. The level cap is also increased to 50, giving players more flexibility to create a character build to endure the longer play sessions the Survival offers. 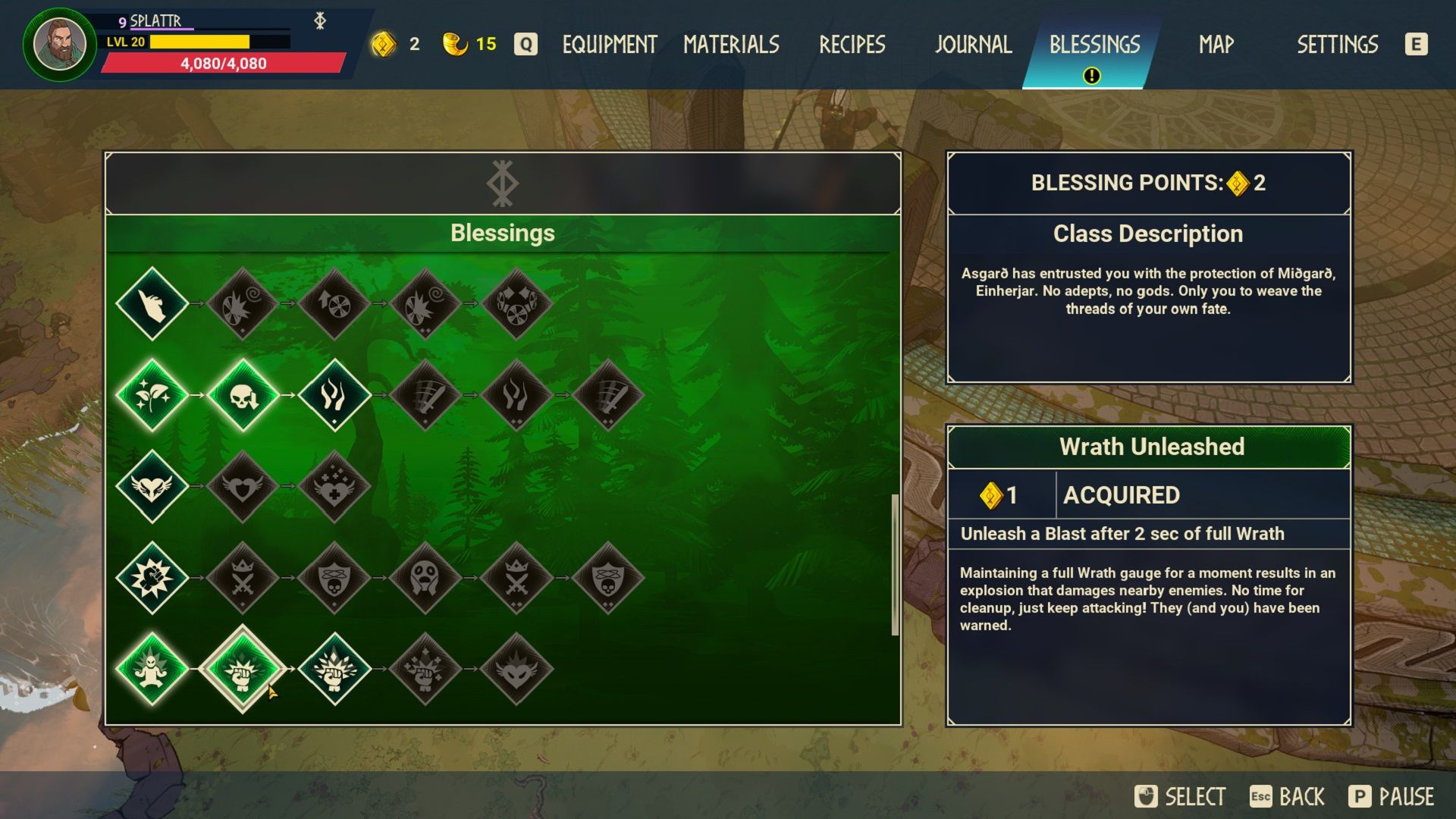 I, for one, am glad that Tribes of Midgard launched as a survival-tower defense-roguelike hybrid. It was a fresh mashup, and Norsfell delivered something out of the norm. That said, the pacing and style of Saga Mode get a little long in the tooth and leaves little to accomplish after the first couple of weeks of a new season. The original Survival Mode was nothing more than a storyless Saga, and the slower pace of Survival 2.0 gives Tribes of Midgard a completely different feel. And even though that feeling is just like any other survival game out there, it will definitely extend my playtime past that of a new Saga season alone. Now, if Norsfell can do more work on the base-building side of things, I could easily see Tribes of Midgard being my go-to survival game.