Total War games have a real special place for me, no matter the setting or time period for the game itself. Total War was one of the first titles that really made me a PC gamer growing up. And while the series has taken quite some turns since the old Shogun days in the late 90s, none have been more game changing than the Warhammer series.

We’re on the third one now, with Creative Assembly going all-in on telling a grand story fit for the Warhammer Fantasy universe for veterans of the franchise and newbies alike. While the first two titles had narratives, Warhammer 3 feels different.

In a press preview late last week, we had the chance to go hands-on for eight hours of Total War: Warhammer 3 with two of its playable races that will launch next month: Grand Cathay and the newly announced Daemons of Chaos.

Each new Lord and faction has its own set of goals and mechanics, and it was fun diving into both the Daemons but also Grand Cathay’s Miao Ying. Ying is one of the Dragons leading the Northern Provinces faction in Warhammer 3. Her eternal task is guarding the great wall in the north known as the Great Bastion, keeping the agents of Chaos at bay.

Starting out as Ying sees rebellion near the capital’s gates, as well as a breach in the Great Bastion itself that will need to be plugged. The Tzneetch Lord Kairos Fateweaver is close at hand seeking to break through the wall itself, having already captured the nearby Terracotta Graveyard.

As such, the first few turns in Total War: Warhammer 3 follow a familiar pattern if you’re a series veteran: deal with an early rebellion, consolidate your borders and start to plan how you’ll move beyond the first couple of turns.

Initially I found this quite difficult to contend with. My general goal in Total War games is to expand quickly and set up a frontier around my capital to defend. I recruited Lords to help man armies and take the fight to Kairos, yet as I started to make moves towards the Terracotta Graveyard and expel the agents of Chaos there, I found myself still dealing with rebellious factions to my south. Consolidating Gunpowder Road was my first task then, but in doing so I was leaving the Bastion undefended for a few more turns.

Being able to keep up the Storm Dragon’s charge to plug up the holes of the Great Bastion and protect Cathay from the denizens beyond its borders while still dealing with internal strife to the south was something I had to contend with over my 50 turns. Learning to use diplomacy to ensure my flanks were protected and dealing with threats from dissenter lords consumed my first few turns, though all the while my gaze was turned northwards, hoping I could get the Bastion defended soon.

It’s an interesting dynamic, having to have harmony with my strategy, something that is at the heart of how Ying’s Grand Cathay plays as well. Harmony between Ying and Yang will be a constant battle, one that has to be fought to ensure you’re not dealing with negatives for being too hard swung one way or another.

Everything in Cathay is balanced to either Yin or Yang. Buildings lean one way or the other, troops and even Lords you’ll summon contribute to one side or the other. Learning to build not just your civilization but also the armies you field to be in balance is, well, a balancing act. However they confer bonuses that make it worth the effort. Troops on the battlefield of opposing sides get a bonus when fighting near each other, and being in balance means that you won’t see a penalty when you need to build something. 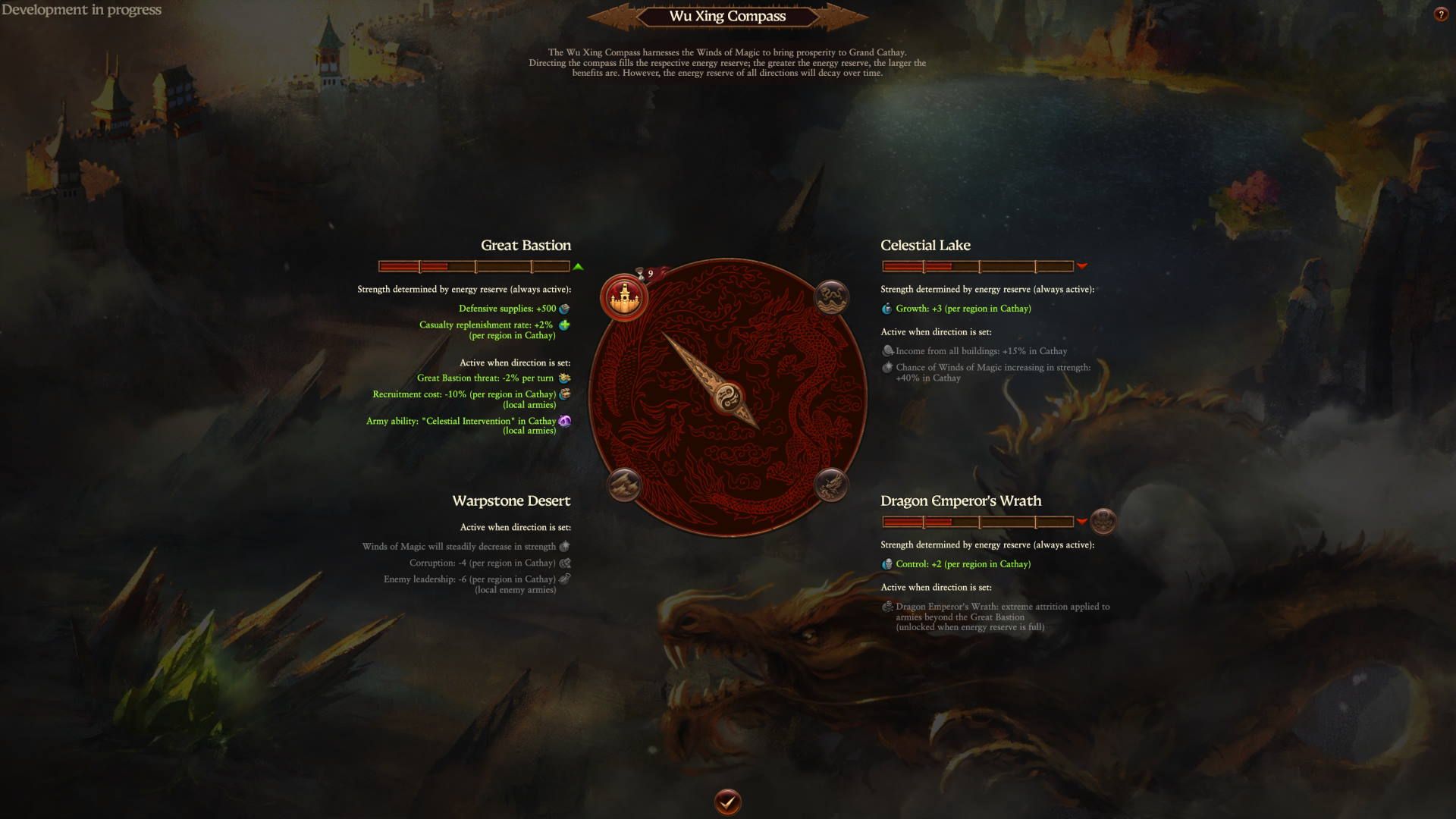 Cathay also benefits from The Ivory Road, a trade route which can bring riches in the form of income or legendary items, as well as open up diplomatic bonuses for other factions down the road. However, one of the lasting mechanics of The Storm Dragon is the Wu Xing Compass. Point the compass in one of four directions to get bonuses, such as a decrease of chance the forces of Chaos will breach the Bastion, diverting the negative aspects of Winds of Magic away from Cathay.

As fun as I found balancing Miao Ying during the gameplay session, the newly announced Lord Daemon Prince provided endless options to check out during my limited time with Warhammer 3.

Since the Daemons of Chaos venerate all four of the Chaos Gods, you can effectively build your faction to lean hard on one or two of the Lords themselves, or choose to evenly build up your forces with the best each has to offer. As you take over settlements and build within your lands you can dedicate these areas to one of the Gods, and such build units and builds associated with that Lord. Want to get some of the aerial units from Tzeentch mixed with the strong ground units of Khorne? You can do that. Want as balanced an army as you can create, bringing the best of each? Easy.

As you do you’ll gain Daemonic Glory which acts as a resource to unlock new technologies and skills. This could mean anything from a new unit to a new army stance, and more. Being able to teleport through impassable terrain with Tzeentch’s Teleport stance made for some interesting ways to move troops around Kislev. I also enjoyed the Nurgle’s ability to literally bring a pestilence with you, giving your army bonuses in a region and debuffing an enemy army nearby my unit. 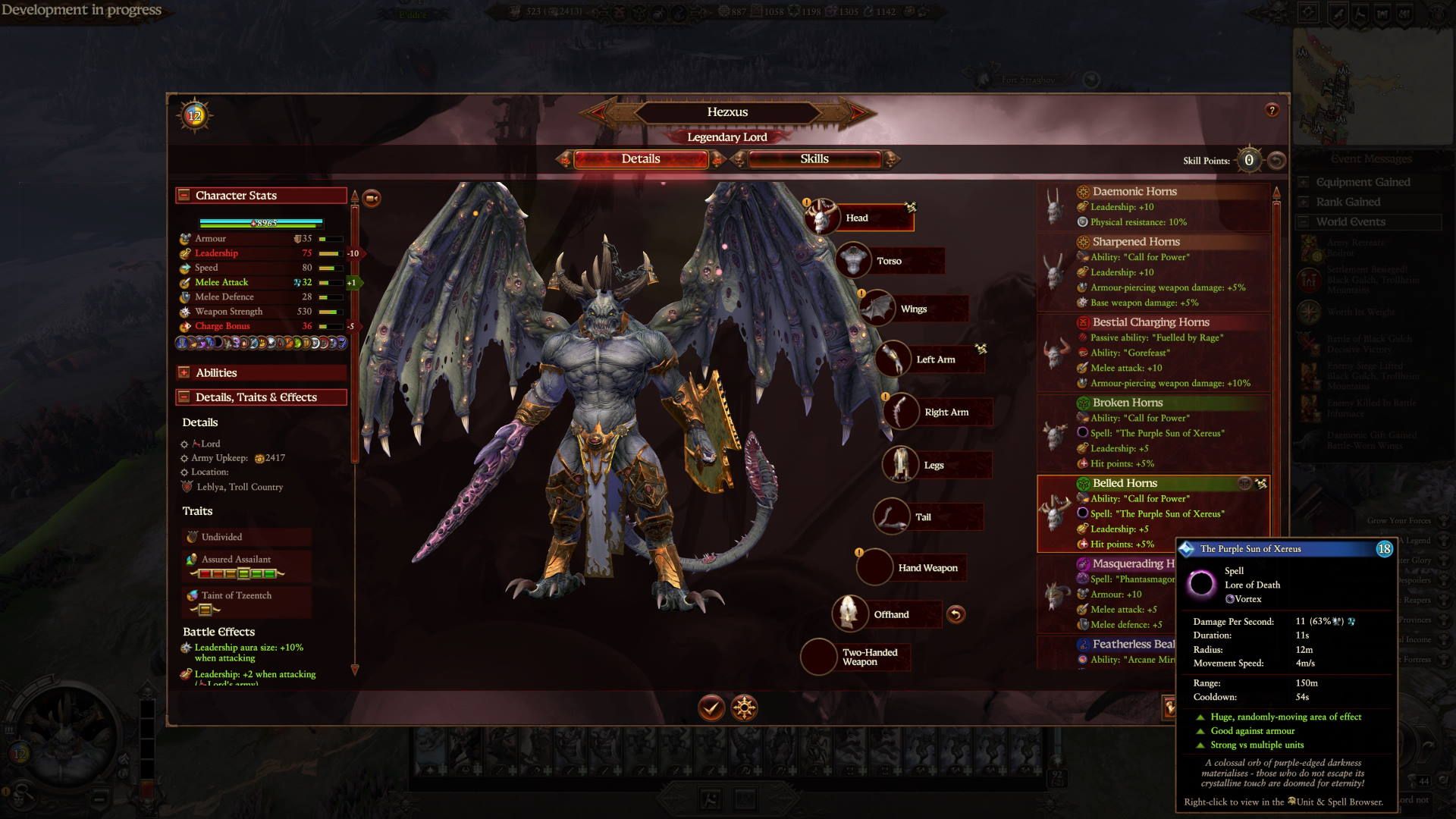 Every aspect of the Prince is customizable, from their head to the weapons they hold in their hands. Creative Assembly states that there are over 500 billion different combinations of body parts to choose from, so the choices are quite limitless in practice.

It was fun mixing and matching parts to create the Daemon Prince I wanted during my 50 turns. Being able to change this each turn on the fly is nice, especially if I feel an engagement might benefit more from my Prince being a tanky Lord on the field or a spell-weaving damage dealer.

I really love the level of customization in the actual army as well, being able to pull from the different Chaos Gods themselves depending on how much Glory I’ve earned.

Remember that narrative though? It wasn’t forgotten during the course of my Total War playthrough. While getting to grips with my Daemon Prince I was reminded of the Bear God Ursun’s plight with a tremendous roar of pain from the God. In doing so rifts were torn open in the world, spewing corruption, but also acting as a doorway from the Mortal world to the Chaos realm.

As each faction vies to use the dead God to their advantage there is really only one major problem: no one can reach Ursun. To do so, you’ll need to enter one of the Chaos realm devoted to the four Gods and claim one of the soul of that Rift’s patron. It’s not that straight forward, especially when the realm is built with challenges such as portals in Tzeentch’s to keep you on your toes. Oh, and enemy armies are also rushing to claim the soul for their own.

While 50 turns was too short to do this more than a few times, it provides yet another layer of challenge to the Grand Campaign as you not only need to be aware of what’s happening in the Mortal Realm but also the status of your armies in the Chaos Realm. I found myself at first focusing too hard on my Daemon Prince while in Khorne’s realm, only to see one of my newly acquired regions fall back into the hands of Kislev back in the Mortal realm, stranding my army in enemy territory when the Rift eventually closed. 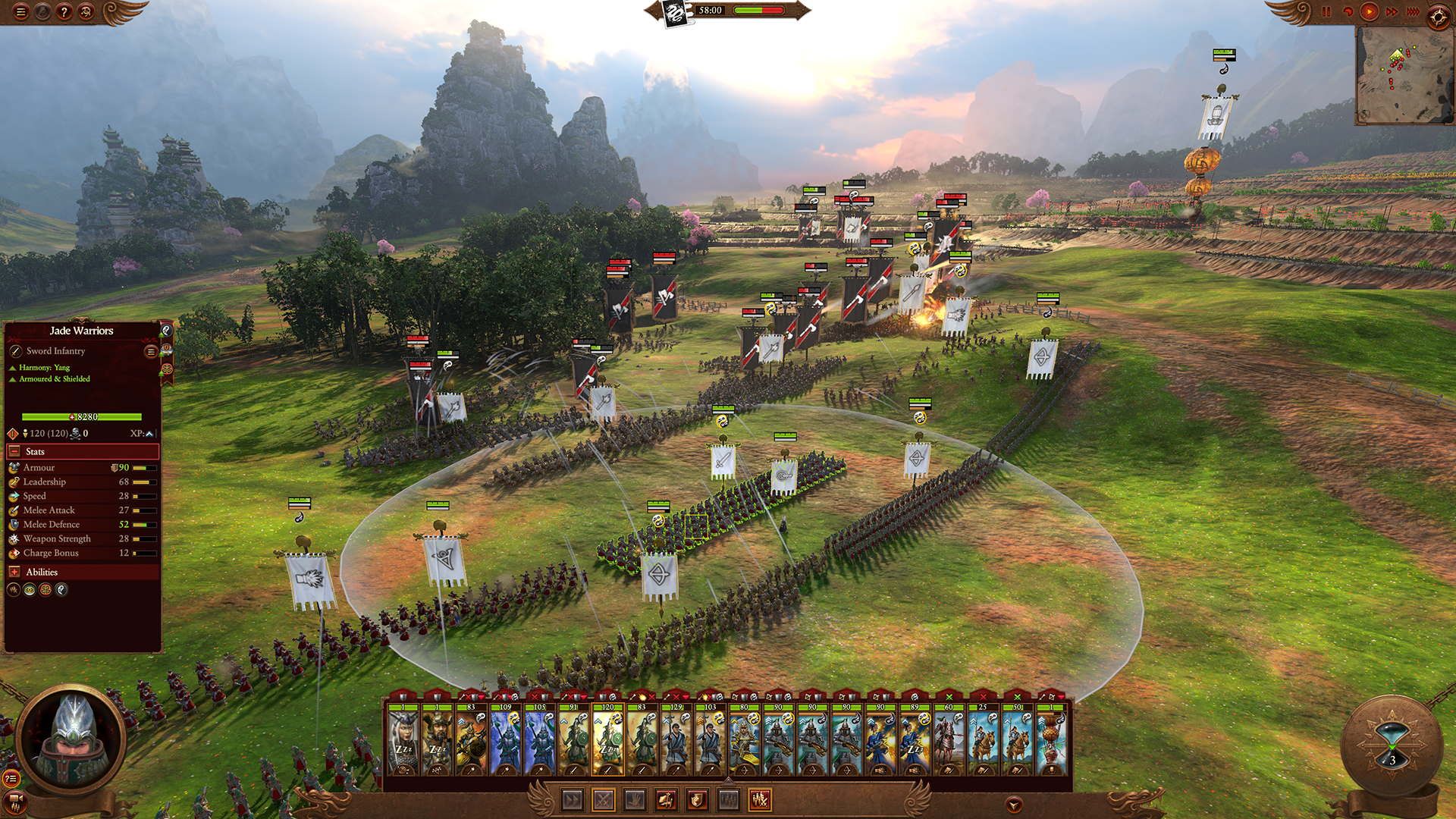 It’s this device that should help keep the narrative at the forefront of Total War: Warhammer 3’s gameplay. I’m eager to see how things play out once the full release takes place, especially as collecting the four souls of the Chaos God sees players able to finally take on the villain of Warhammer 3 and the one at the center of all of the struggles: Be’lakor

For those who like to play with friends, you’ll be excited to hear as well that simultaneous turns are making their way to Warhammer 3, streamlining multiplayer games in a big way. This is good, especially since the max player count in the campaign has been increased to a total of with players.

Total War: Warhammer 3 is shaping up to be one of the more interesting titles in Creative Assembly’s line-up, and with such a focus on a single narrative it makes me excited even beyond Warhammer 3 itself. The wait isn’t much longer, as Total War: Warhammer 3 releases next month on February 17th on PC via Steam, PC Game Pass and the Epic Game Store.