Total War: Warhammer 3, by Creative Assembly, is on the horizon, and we are taking the fight to four realms of chaos in the capstone of this franchise. As a Warhammer Fantasy tabletop and RTS fan from early childhood, when the opportunity to preview the new Survival Battle mode came up, I jumped at the chance, and I was not disappointed. While there were a few technical issues with the alpha build and a small amount of gameplay delay due to the streaming technology used, it was still perfectly playable and hella fun. I also had the chance to chat with Jim Winston, Lead Battle Designer, and James Martin, Game Designer, to ask a few follow-up questions after my second attempt.

For this preview, I played the Kislev faction with Tzarina Katarin Bokha as my legendary lord. Katarin wields the Lore of Ice, which has several spells to help hinder/damage enemies and buff ally units. Early on, I found myself using primarily three: Frost Blades, a weapon armor-piercing (AP) and melee damage buff, Ice Maiden’s Kiss, a breath spell that reduces movement while inflicting damage over time, and Heart of Winter, a 4-phase DOT/AOE that cause increased damage, and movement penalties per phase. Heart of Winter was especially useful in wiping out large blobs of enemy troops. Towards the end of the event, when fighting boss units, I ended up leaning more on Death Frost, a single target direct damage spell. 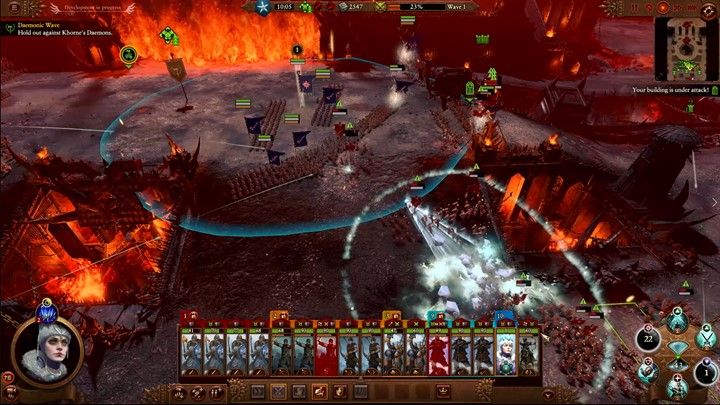 The demo begins at the bottom of a bleak yet beautiful map, the player marshals their troops to take the first Victory Point by wiping out any oncoming opposition and then the guard units. Once secured, the toolkit for survival battles becomes fully available. Supply resources are awarded for each victory point captured and a smaller amount for each enemy defeated. These supplies are then used to construct defenses, buy army improvements, and to recruit/withdraw units.

I found constructing defenses the most interesting of these new tools, as there are multiple build points around each of the three Victory Points. In tower locations, a player can build automated ranged defenses with different bonuses/effects depending on how much they are willing to spend of the precious supply resource. Ground locations are for building barricades or traps to help block/slow enemies and support troops, creating choke points that are easier to defend. 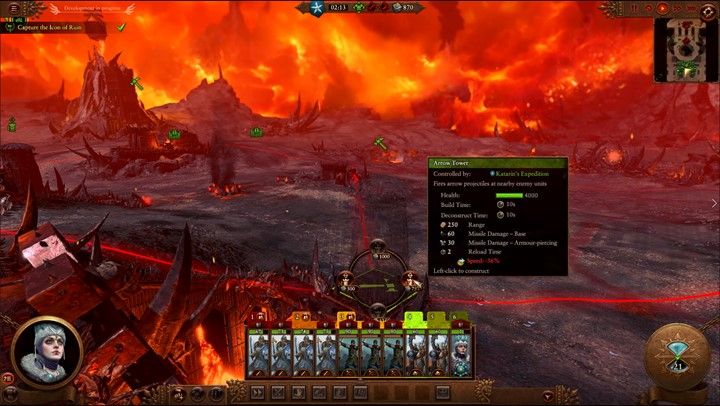 Defend them I did, since after taking a Victory Point, the daemons of Khorne appear to take it back in short order. If the enemy is successful at retaking locations, any constructed defenses will be destroyed. While it is tempting to buy up all the pricy defenses, I found myself mostly buying the basic ones early on, so I could spend more supplies on healing my troops and recruiting more units. While other army improvements are available to buff weapons and armor, most of my extra supplies went into healing units and restocking ammo.

Once the first Victory Point is secured, there are two more to capture. Each location has progressively harder defenders and retaliation waves. By the end of the map, I started investing in AP range defense towers. Thankfully, the units you can recruit to the battle also become more powerful as you progress.

I fully admit that my first attempt was an embarrassment. Within the first 5 minutes, my cavalry units were out of position and getting massacred by daemons. Meanwhile, two other enemy units were closing on Katarin, forcing me to backpedal. However, since this is a preview build/alpha, the streaming tech crashed, erasing my failed attempt, and I got to try again from scratch.

Round two went a lot better once I got my bearings. I was able to capture and defend the first two Victory Points and quickly noticed the need to leave at least two to three units behind as defenders. Because once each location is secured daemon units will occasionally make their way onto the map and try to retake those areas.

Through it was a pain to run my reinforcements from the first Victory Point to the front line, I eventually was able to take the third objective and face off with the gatekeeper, an Exalted Greater Daemon of Khorne. 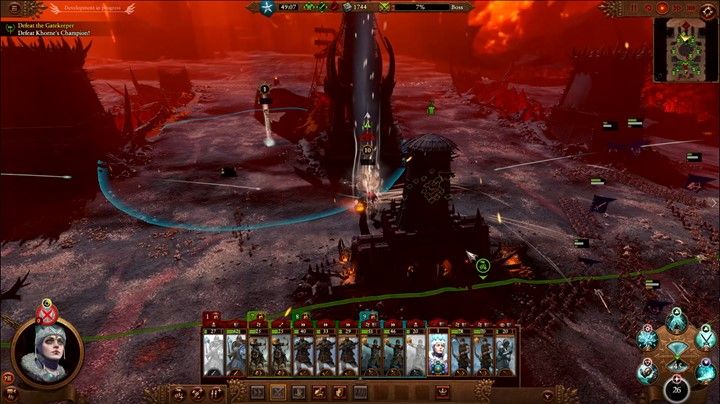 At which point, due to my slow-moving Ice/Elemental Bears and Bear Riders, I promptly had to run back to the middle of the map as Mr. Exalted Greater Demon wiped out most of my army and almost killed Katarin twice! Once regrouped, I did manage to scrape by for the win.

When interviewing the developers, the first thing we chatted about was that while I had a lot of fun during my second attempt, I admitted that it was difficult running my reinforcements from the first victory point to the front lines. They explained that there are spawn points at each victory point, and you need to click on one so reinforcements would arrive on the map at that location. They also provided a tip/reminder to help save my supply resources, if you select wounded units to withdraw they can be brought back later, once healed, as reinforcements.

Where did the inspiration for this new mode of gameplay come from? Jim explained that it was drawn from the campaign and from key points in the narrative where the player decides to invade Khorne’s realm. The developers wanted to push the sense of scale and majesty of such an endeavor. The new tools for players to use help to do this as well. Jim was also interested in seeing how players will use the new toolbox to take on these new challenges. James chimed in that they wanted to provide that immersive feeling when invading a realm of chaos, “players going into the realm itself to knock on the front door and we are able to show that scale with the amount of units and the gatekeeper encounter at the end.”

I was curious if the developers had thought about flipping the script a bit, instead of the player invading a chaos realm may be using similar mechanics from this mode in other ways. James said that for the campaign, you use the army you have cultivated and have lore-specific reinforcements. Jim explained that while they didn't want to get into too many spoilers, this mode will be similar to the core narrative from the previous two games, whereas the player will have the same control over when to interact with the new feature.

But the mode will also be available in custom and multiplayer battles, where you could play co-op with up to three friends. Each player picks their faction, lord, army units, and reinforcement pool. Jim also said that that mode could go anywhere after release with DLC support and evolve further. I asked if players could take on the role of the daemons? But James explained that at this time, it is only versus the AI. In co-op, players are invading the realm, and they will all start from the same position, moving forward to capture the Victory Points.

I asked what the biggest challenge was for implementing this mode? Both said that it was balancing. James explained that “throughout the series, we have taken on quite a bit of balancing challenges, embracing the asymmetry between the races from the source material. We decided to acknowledge those differences between the races, bringing a balance challenge with it. We went into it with our eyes open, as the series has gone on, we have become more comfortable with that.”

While I had a lot of fun with the new game mode, I also wondered what they found to be the most fun aspect as developers. For Jim, it was when they were first putting together the rough prototype with only the core gameplay and found it to be immediately fun, “It also looks really good with hordes of daemons coming at you.” James, “I play far too many games, like many of us here, and I love playing survival mode to challenge myself and test my capabilities/skills. Always felt like the TW series could handle a game like this, but TWW3 is the best game to really show it off, with the Khorne map it really is amazing at this stage. Each map for this mode is unique to give you the proper feeling of the different realms of chaos, it is not a copy-paste job. Very excited to see other people’s reactions to them all.”

As a player, it felt like parts/elements of the new Survival Battle mode could fit well into the siege gameplay, and I asked the developers if there was any crossover. Jim explained that they have made some significate changes to siege gameplay and added in minor settlement battles. Both of which the developers were looking forward to sharing more about in due course. The minor settlement battles, in particular, are now more front and center, wherein previous games you fought outside the settlement footprint, now some of those maps are even 360 degrees, inside the settlement.

James also brought up another multiplayer mode, Domination Battles, which uses some of the new features introduced in the Survival Battles. This mode gives players objectives to keep them engaged in the battle, and they use the dynamic reinforcements from the Survival Battle mode to support completing those objectives. 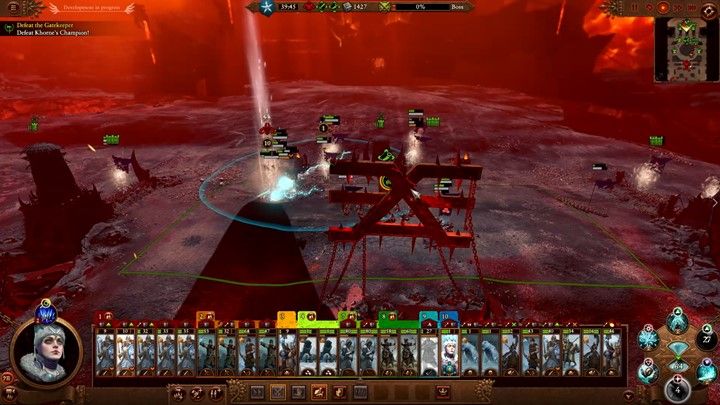 After the interview, I was able to jump back into the preview one more time. As I smoothly moved through the victory points this time around, I did see the small area to click on and change my reinforcement spawn in at each Victory Point, making it oh so much easier. By the time I reached the final conflict, my ranged units were ready and, even though my army took a beating, Katarin didn’t have to turn tail and run even once. Beyond the technical hiccups that come with it being a preview/alpha build I had only two real issues. Changing the reinforcement spawn point wasn’t intuitive at first and I found it hard to click on the tower build locations, almost having to click above them at times to get into the build UI.

Survival Battle is a challenging mode that I already have other ideas on how to complete and I am curious to see how other factions will deal with it since Kislev has a good mix of melee/ranged units. I genuinely had a lot of fun playing through it twice. I can't wait to see the other chaos realms and what new modes/features are still in store for Total War: Warhammer 3.

Towards the end of the interview, Jim made a statement that has stuck with me about the new features/modes in TWW3, “as it is the third game in the series, the easiest thing would have been just to dial it in. But we wanted to keep breaking new ground in the series, making it bigger, badder, and better to reflect the content in this game. It is the most diverse range of races that we have ever tried to depict in the series. We knew we had to push things even further than we had already done to do justice to that, and we would like to propel the series to where everyone acknowledges that is the best strategy game available on PC and any other platform.”