Trials of Mana is a complete remake of Seiken Densetsu III that launched in Japan for the Super Famicom back in 1995. It was unfortunately never released in the West until last year as part of the Collection of Mana on the Nintendo Switch. Now, almost 25 years after its initial launch, Square Enix is breathing new life into this cult classic JRPG in a gesture not unlike the recently released Final Fantasy VII Remake. I’ve been lucky enough to spend 15 hours playing Trials of Mana on the PlayStation 4 and these are my impressions so far.

My Initial Impressions and Comparisons

The biggest difference between the original Seiken Densetsu III (SD3) and Trials of Mana is most notably the graphics. Square Enix decided to forego the isometric viewpoint used in both the original as well as recent 3D remakes of other Mana games, like Secret of Mana that launched two years ago, in favor of a more modern third-person perspective. Thankfully, instead of a more realistic art style like in Final Fantasy VII Remake, the art of Trials looks a lot closer to one of Square’s other franchises: Dragon Quest. 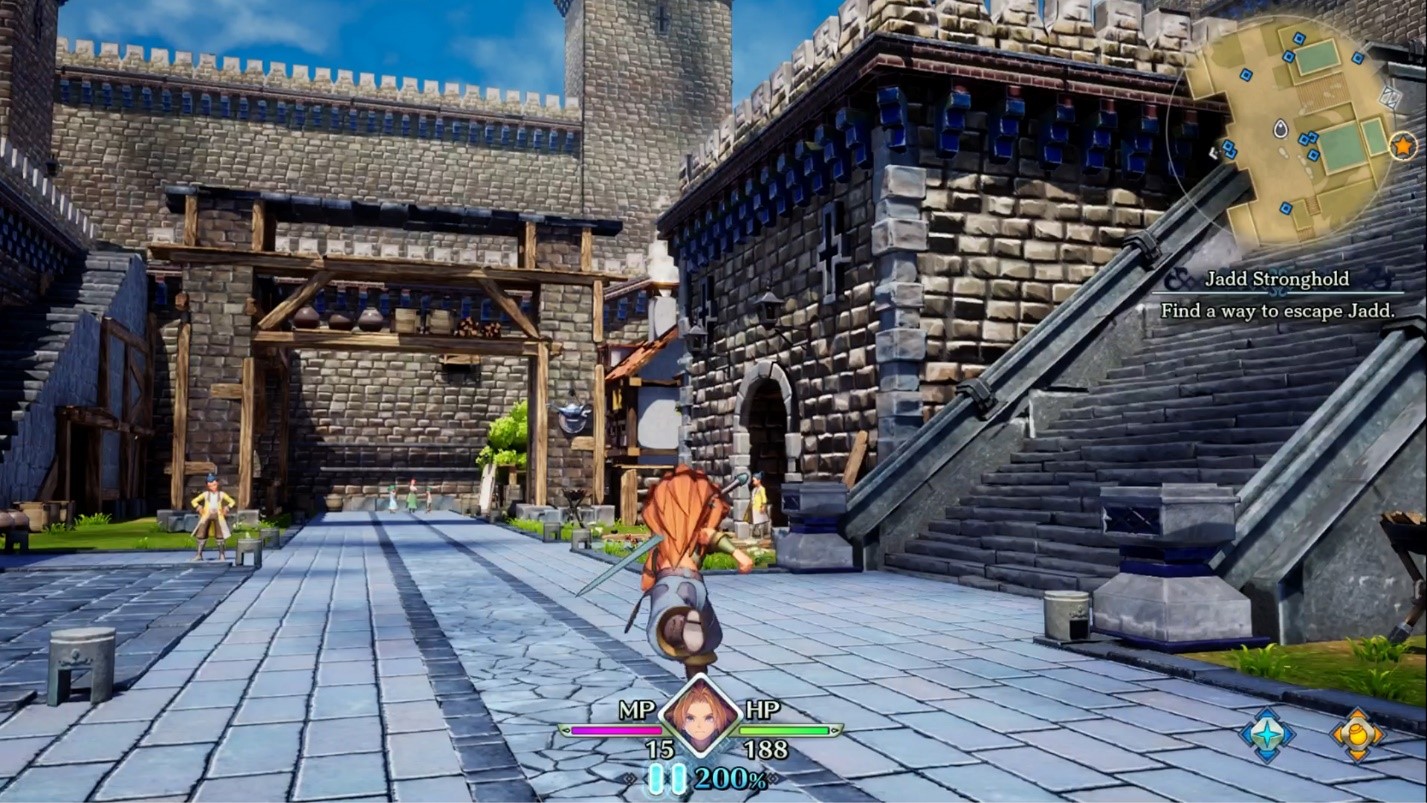 From the character design to the towns and monsters, everything in Trials of Mana looks like it would be right at home in Dragon Quest XI. I personally love this more cartoony style and thought that it suited the Mana franchise perfectly. I would be more than happy to see remasters of other Mana games in this same style, or even a brand-new entry for the series.

The next biggest change-up from SD3 in Trials of Mana would have to be the voice-acting. I was honestly surprised to find fully voiced dialogue for the protagonists. The fact that Square took the time to not only localize Trials, but to also provide voiceovers in both English and Japanese really shows that they cared about this remake and gave it the attention that it deserves.

I switched between both Japanese and English options because initially the English voices were grating to listen to. Unfortunately, the same could be said for some of the Japanese voices as well. Most notably the character Charlotte, who’s apparently 15 years old but looks like she’s 6, suffers from speech-impediments where she can’t pronounce her ‘L’s and ‘R’s has the most annoying and grating Japanese voice. In comparison, the English voice was like a sweet honey-wine to my ears despite the same speech-impediments affecting the lines. Both Kevin, the Beastman character, and Duran, the mercenary swordsman, have better Japanese voices in my opinion but even so they couldn’t outweigh having to listen to Charlotte’s voice. As for the other three selectable characters: I haven’t had the opportunity to listen to them yet, but I do plan on a second playthrough without Kevin, Duran, or Charlotte. Especially Charlotte. 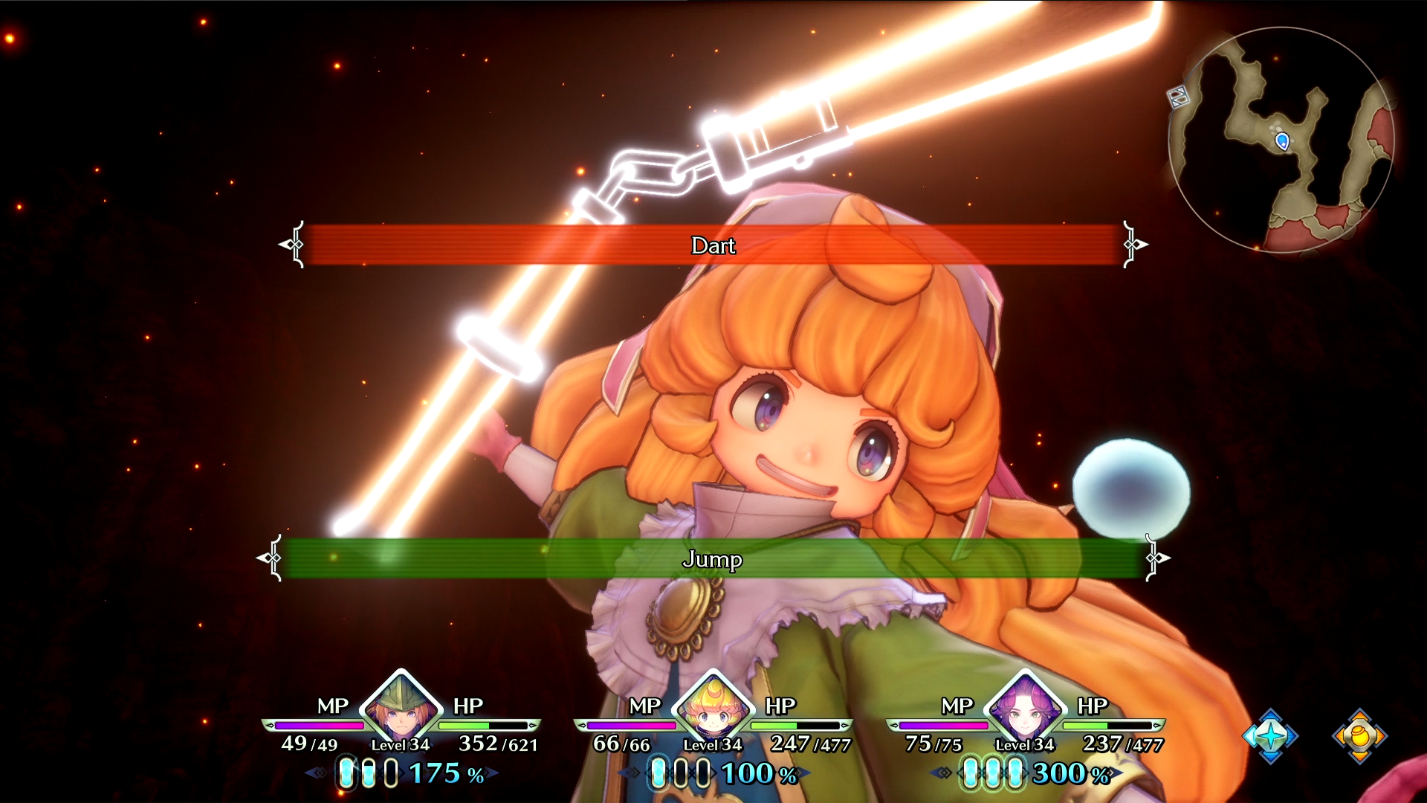 Lastly, the soundtrack also got a nice new modern take while still retaining the beauty of the original score. For purists, Trials does offer a classic ‘Original’ score setting in the Options but the ‘Remake’ score is on by default. Listening to both scores, I really don’t think you can go wrong with either choice. The ‘Classic’ score was one of the best video game soundtracks ever made during the 16-bit era, and the ‘Remake’ version just enhances the richness of the orchestral compositions that wasn’t technologically possible back on the Super Famicom or Super Nintendo systems. No matter which sound you prefer, you are going to enjoy it.

How About the Combat Though?

One facet that I’ve always enjoyed in Mana games is the lack of turn-based combat, and Trials of Mana has remained true to its roots. The combat in Trials is very similar to other Action RPGs games, such as in the Star Ocean and Tales series. The combat is simpler than those though because combat moves aren’t tied to a positional analog stick and are instead button oriented. Meaning that the Circle button is for quick attacks, Triangle for strong attacks, and Square to dodge in battles and it doesn’t matter what direction you are aiming the analog stick, those buttons will always perform the same move. 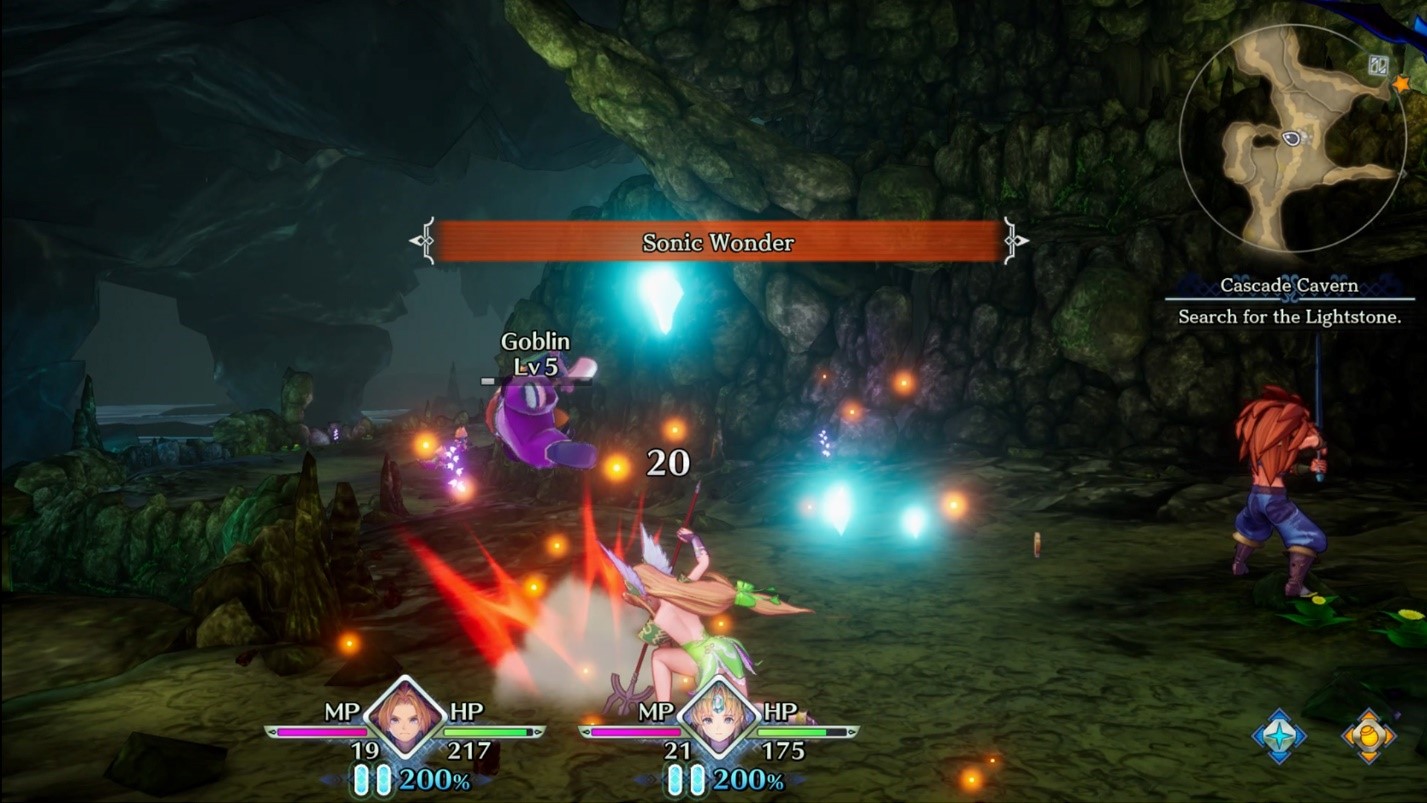 A quick aside: I think the default Circle for attack is atrocious, but there is an option in the settings to customize button configurations to whatever I wanted them to be. I switched the Circle to attack with Square for dodge and it made the combat feel a whole lot better to me.

I always disliked how in Tales games I had to hold a shoulder button just to freely move around or move the analog stick backwards in order to defend. Likewise, I don’t like the random battles making me stop everything I’m doing and watch my party get ready to fight some monsters – or the victory poses they strike afterwards. Trials of Mana offers a bit of quality of life in this regard and doesn’t do any kind of random battles. There is no victory pose, or pages of stats and item drops that you must click though. Instead, all battles take place in the exact same spots that you’re exploring. 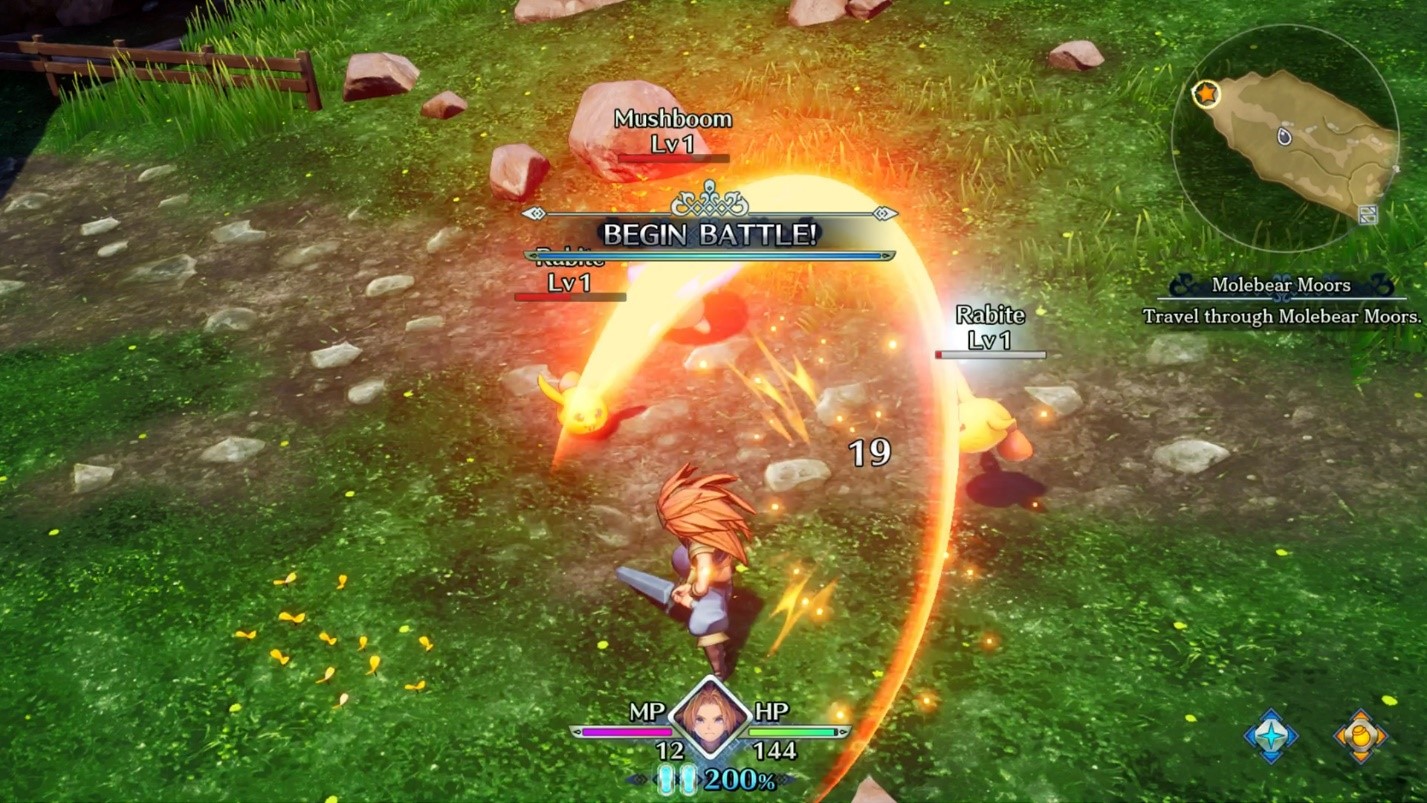 When characters do level up, you can boost their stats through the menu in order to learn new moves and abilities. Pumping all points into Strength for example will unlock passive bonuses to Strength, as well as some new abilities like ignoring 50% of monsters’ armor. This gave me a certain amount of freedom that I find most other JRPGs to be lacking. Instead of stats being assigned for me, I could determine that I wanted my beefy mercenary Duran to focus on Intelligence or Luck instead and learned a nice healing skill. Some skills can even be shared between party members, so even though Charlotte is my mage character I can have her learn a Strength skill that I can share with Duran to give him a 5% more damage buff.

Admittedly, the story in Trials of Mana is pretty tropey and a little hard to follow along coherently. There’s a Tree of Mana that was sealing eight demons called Benevodans but now something happened, and the Tree’s power is waning. A random fairy forms a pact with me and tells me that I’m now the only person capable of pulling out the Sword from the Tree’s roots to put a stop to the evil that will soon be unleashed. Meanwhile, some bad dudes are out causing havoc and its up to me and my merry band to put a stop to them. 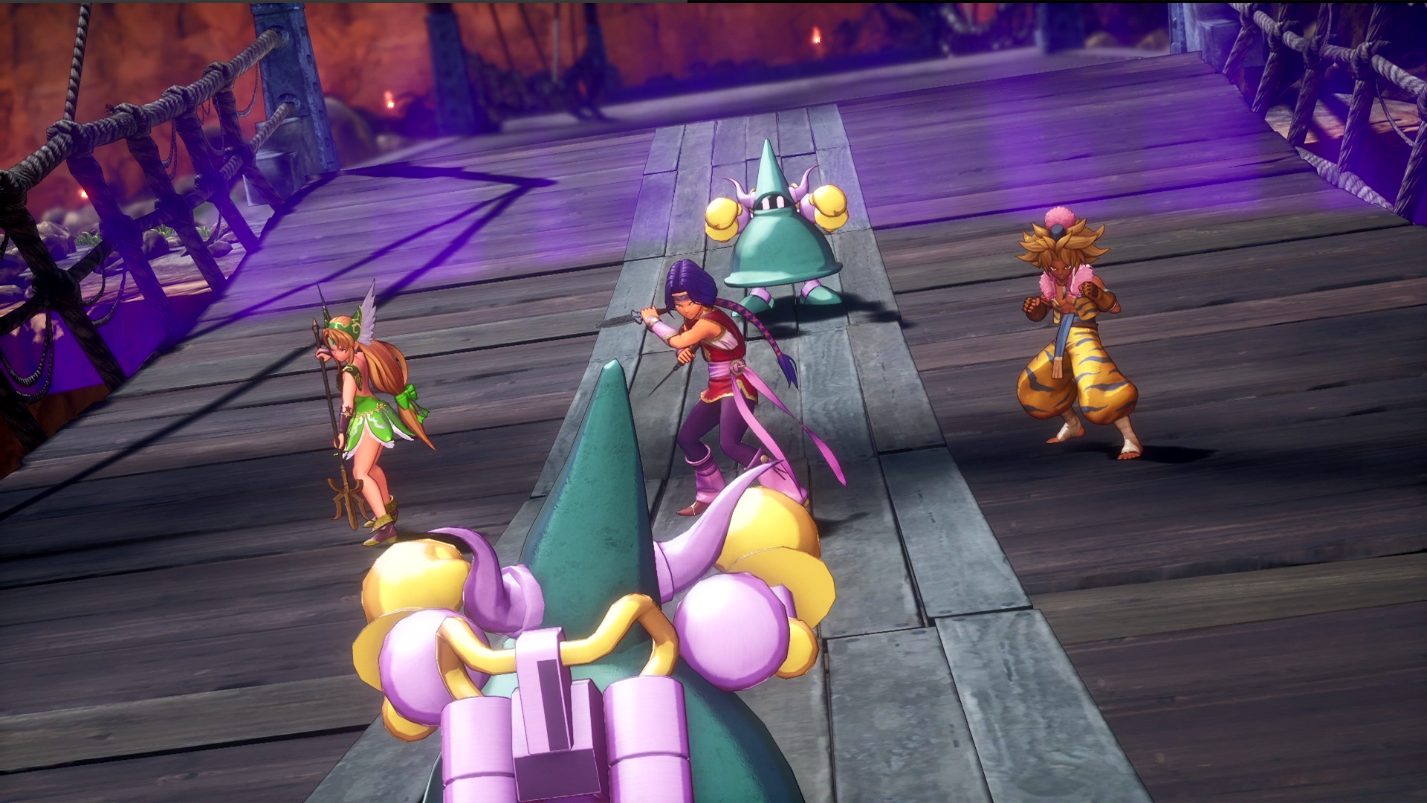 I feel like some of the story beats get rushed in the beginning and could have been flushed out a bit more, like in Final Fantasy VII Remake. Different series of events happen one after another, and there are several instances where time just skips ahead conveniently so you can get to the next town. I’m not saying I want a whole bunch of filler content, but I do want to understand my characters’ motivations a little better and also explore the backstories of some of the notable side characters that I’ve met, like the eccentric inventor that built a cannon to send me to a town because a bridge was out.

Square Enix is on a kick of reviving 20+ year-old games and completely remaking them and I am loving it right now. Trials of Mana is so far turning out to be one of my favorite entries in the entire series. Although some aspects of its storytelling aren’t what I would call modern, the gameplay and combat systems are keeping me well-engaged. I am excited to inevitably play through each character’s story and see the different outcomes and nuances between them, but that will be a total of six playthroughs of this game. For now, I’m just planning on a second run so I can enjoy the other three characters as well.

If you’d like to try Trials of Mana yourself, you can do so right now by downloading the demo on Steam or through the PlayStation Store and play through the first couple of hours. The best part is any progress you make will carry over into the full game. Meanwhile, stay tuned for our full review coming later next week.

Full Disclosure: A copy of the game was provided by PR for review purposes.