The First Descendant is a new co-op action RPG shooter from Nexon Games launching in 2023 on both PC and consoles. You play as a Descendant with a mission to fight alien invaders in a war-torn world to ensure the survival of the human race. Like similar looter shooters, you’ll complete missions, earn loot, and power up your character in a never-ending treasure hunt for better and more powerful gear. I’ve had the chance to go hands-on with The First Descendant during a closed preview ahead of next week’s open Steam beta. Here are my thoughts so far.

What if the developers of Destiny 2 and Outriders collaborated together to make a new looter-shooter? That’s essentially the elevator pitch behind The First Descendant. And it showed in almost every aspect during my playthrough. In fact, the similarities between The First Descendant and Destiny 2 are so striking that it’s pretty much impossible not to reference the popular Bungie-developed shooter in this preview. But I’ll try to do my best anyway.

The First Descendant starts with a beautifully-rendered CG story trailer that showcases the action you can expect, as well as highlighting three of the Descendants that you’ll choose from to initially play as: Titan Ajax, Warlock Viessa, and Hunter Lepic. In total, there are 10 different Descendants that can be unlocked over the course of the story, but more on that later. From the moment I could control my character, it felt like I was playing a new update to Outriders, with the same feeling of gunplay and a very similar artstyle. But the more I played, the more I realized how much it copies from Destiny 2 while still trying to pull off what Outriders did. 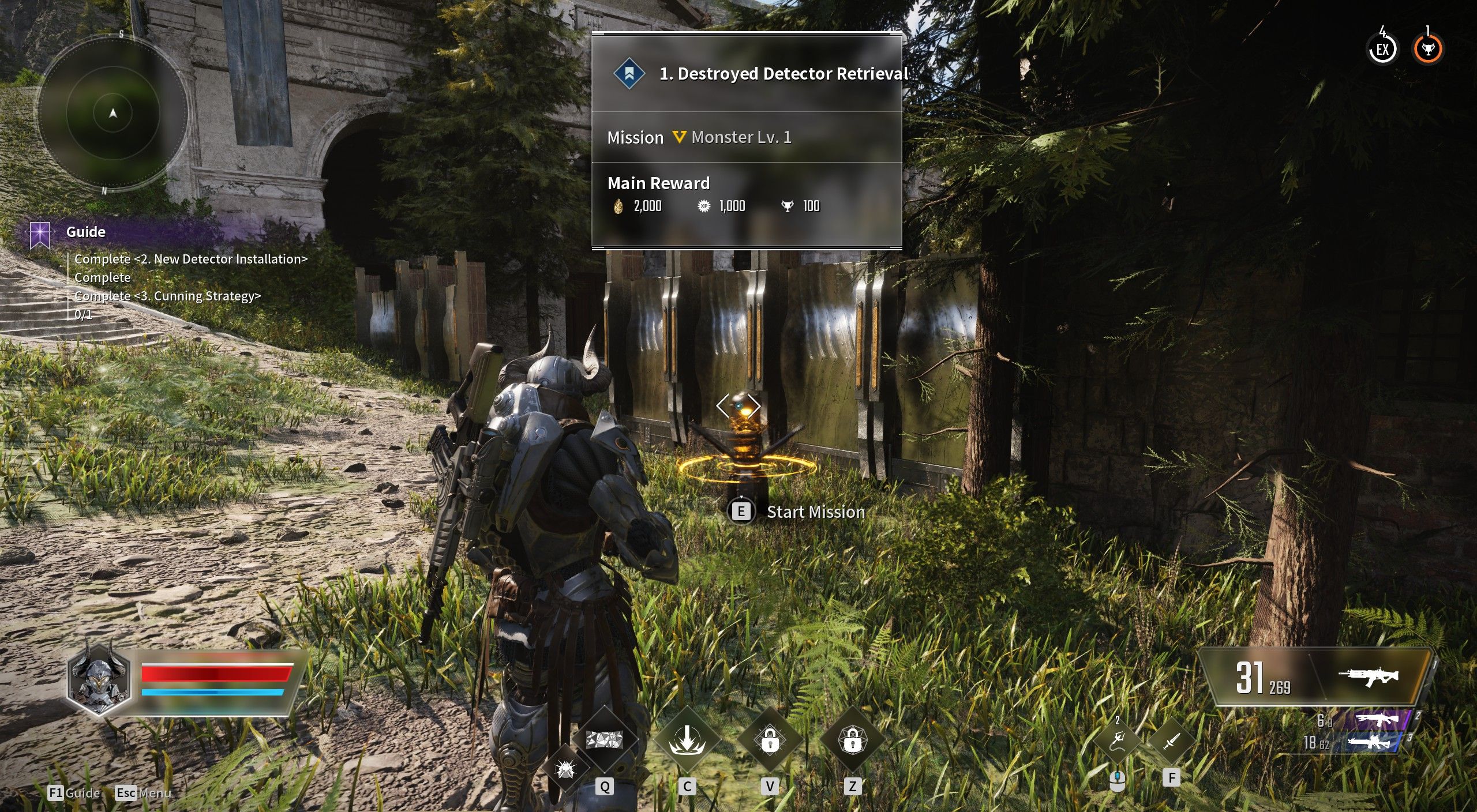 I chose Ajax as my starting Descendant because he bore similar traits to Destiny 2’s Titan class, with abilities that let him drop a huge, glowing shield in front that protects from bullets and being able to take more damage than the other starting Descendants. Additionally, his armor looked like a re-skinned Lord Shaxx so, you know, he looked the coolest out of all of the Descendants as well. Each of the Descendants have four Active Skills and a Passive Skill that are unique to that hero, but the Active Skills aren’t available all at once; you’ll have to level up a few times first to unlock them all.

The tutorial mission introduces basic combat and traversal. Like Destiny 2, weapons are differentiated by their ammo type which are coincidentally color-coded into Primary General ammo, Heavy Impact ammo, and Special ammo for ease of recognition. The guns run the gambit of your usual weapon types such as Auto Assault Rifles, Sniper Rifles, and Shotguns as well as more specialized guns like the Pulse Tactical Rifle, Rocket Launcher, and Trace Beam Rifle. Gun rarity tiers are also divided by color, with higher tiers ranging from Blue to Purple to Orange. 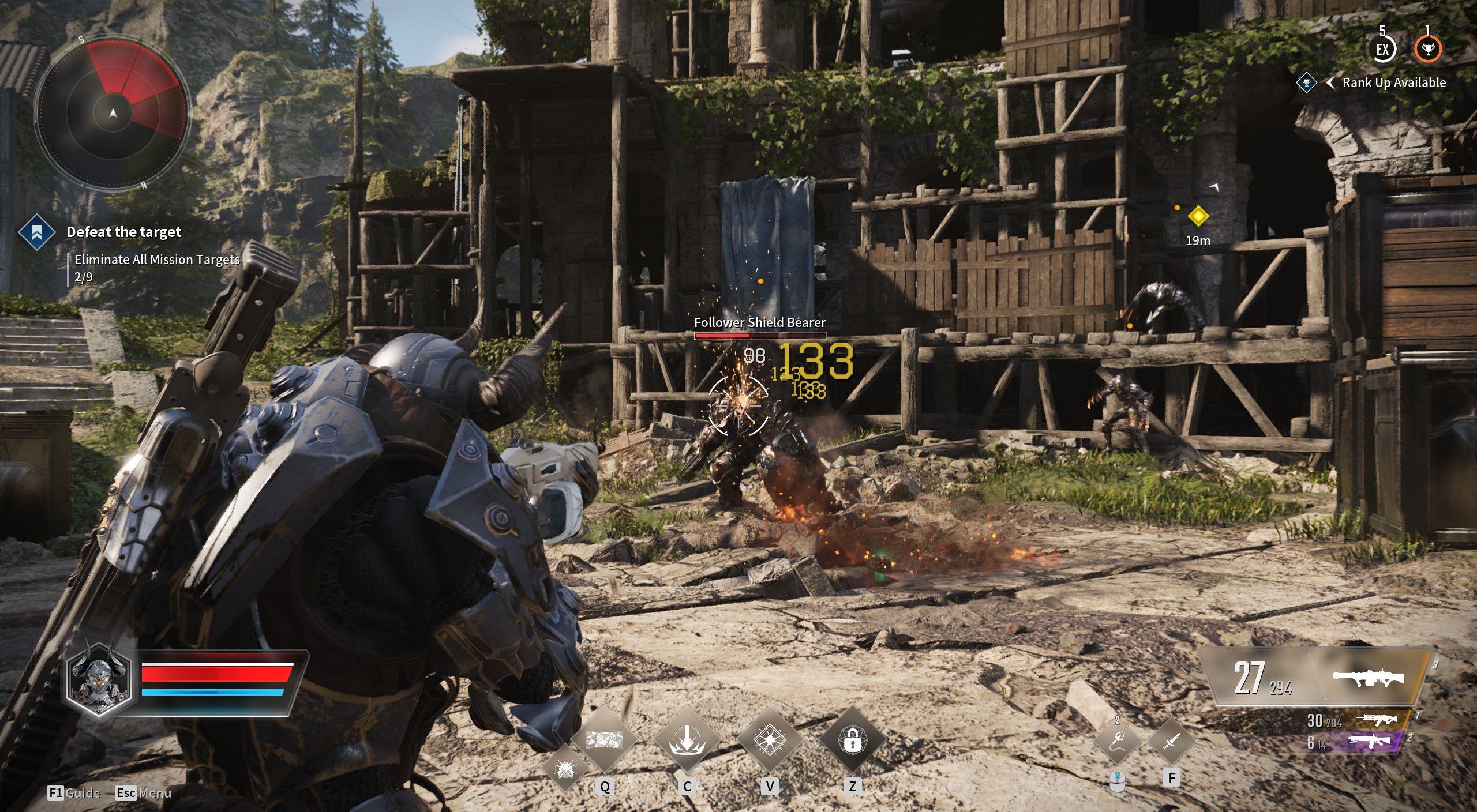 Although the gunplay doesn’t come close to the smoothness of Destiny 2, it feels right at home with other cover-based shooters. You can duck behind pillars or walls for cover, and take your time firing potshots at the different enemies as they either try to rush at you or stand idly by while they wait for you to peek from behind cover. The enemy AI may not be that great, but it’s still pretty easy to get overwhelmed when at times it seems like they just don’t stop spawning. To help navigate the battlefield a little bit better, The First Descendant has a grappling hook mechanic that can pull you up to almost any ledge or overhang making vertical fights a more common tactic.

This grappling hook is the most unique feature to The First Descendant that really separates it from the rest of the pack. Although it can’t be used constantly (and thus never feels like you’re playing as Spider-Man) the cooldown is short enough that I never felt hampered by it. I was able to employ it almost every time that I wanted to reposition myself for either flanking enemies or just to navigate the world more seamlessly. In a fireteam group setting, it will be your best friend in getting the drop on groups of enemies as you can easily get to an advantageous spot while the enemy is focused on your other teammates. 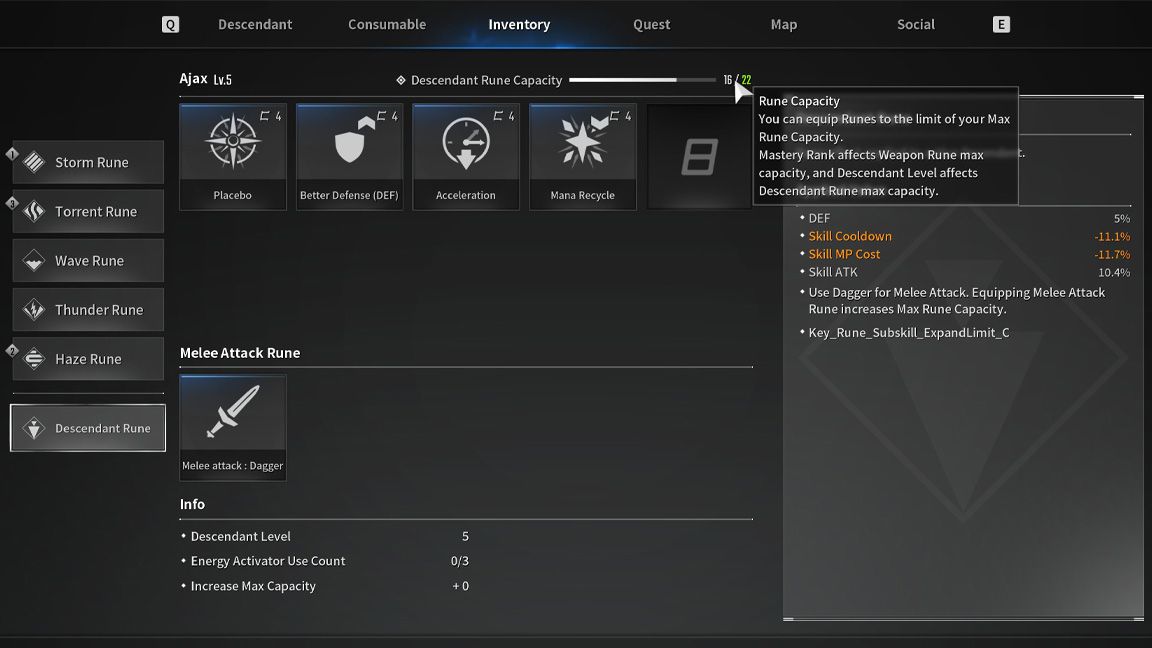 Another “new” aspect in The First Descendant, at least in the sense that it isn’t ripped from Destiny 2, is the inclusion of a Rune system to provide passive buffs to your Descendant. These drop from mobs just like other loot and can be slotted into your Descendant through the gear menu. There are different slots that affect different weapon types, as well as one to affect your Descendant’s stats and their skills specifically. These different areas to slot them in have a point total, and each rune costs a certain number of points - with higher level or more powerful runes costing more. So you can’t just slot all of the most powerful runes for the endgame. These runes do have special symbols on them that, when slotted into a corresponding slot, will reduce the amount of points required to slot it. Sound familiar? It might if you’ve played Warframe, as this is the same mod system that it uses to enhance your Warframes.

Weapons and runes can be earned as loot or as rewards from missions. Missions are available in-world in each of the large open zones on the map, so you can just zone in and head towards the mission you want to go do next. The main map also shares a similar art style to Destiny 2 and navigates similarly. Also like Destiny 2, these missions show up as flags beacons that you can walk up to and accept. They also share a similar UI icon to its inspiration. These similarities might be the most egregious when it comes to how much The First Descendant has copied over from its competition, as both the map design and mission elements seem pulled straight out of Destiny 2. At least for us prior guardians, it’s pretty easy to hop in and play without feeling confused since so many aspects look and interact the same. 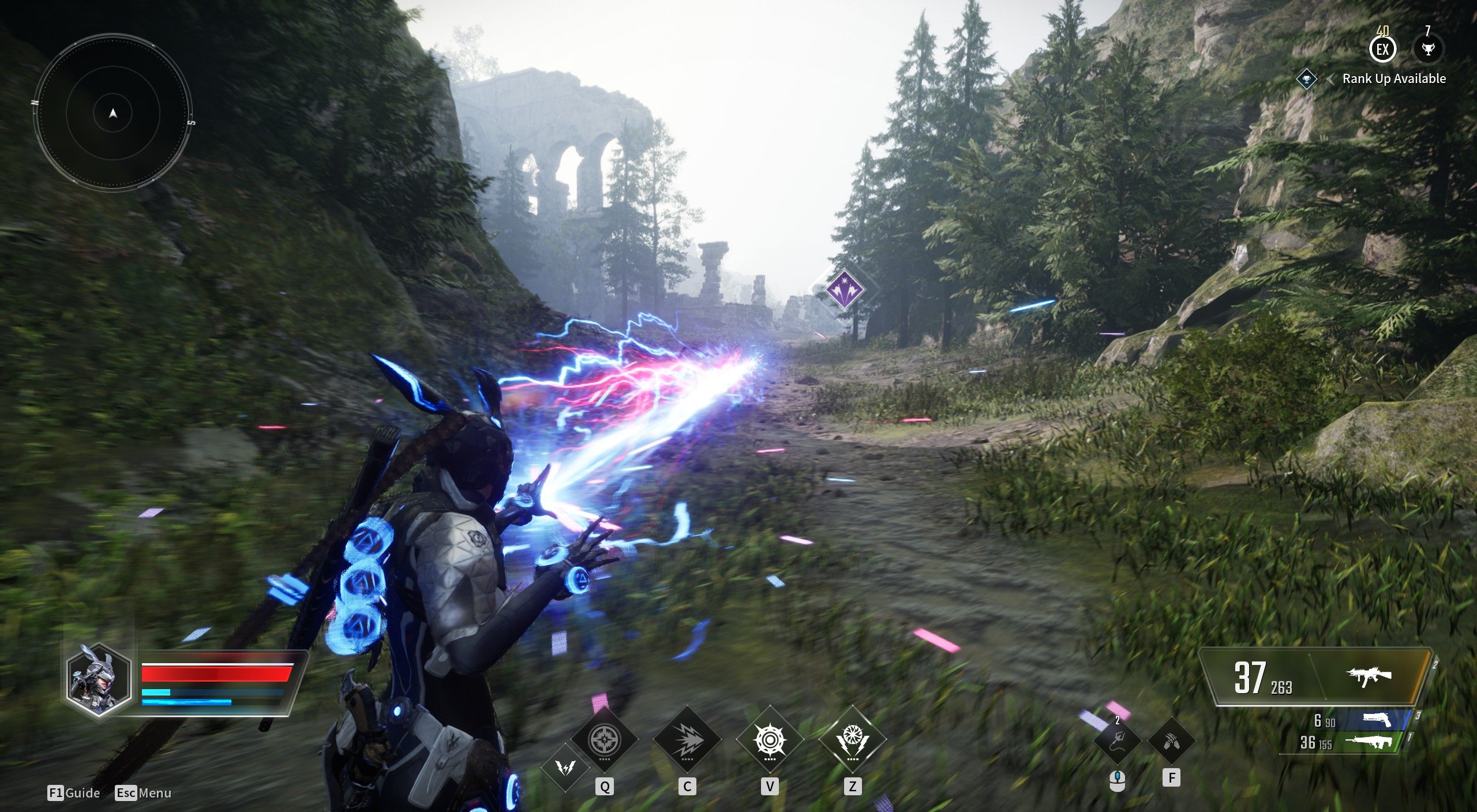 What The First Descendant does do differently is allow players to unlock and swap to other Descendant classes. These can be unlocked through researching them, which requires specific materials in order to progress. Once unlocked, you can change your Descendant and harness their new abilities to change up the gameplay. One of my favorites that I got to play was called Bunny, whose abilities let her zip around the battlefield and shoot out arcs of lightning. One of her abilities lets her increase run speed, which paired nicely with another ability that would blast out electricity every time you ran a certain distance. This meant I could sprint around groups of enemies, blasting them at close range, without ever having to stop and fire my gun at them.

When you’re not out running missions in one of the several large open-world zones, you can take a breather and chat with other guardians players in the hub tower city of Albion (not to be confused with Albion Online). Here, you’ll be able to meet with a plethora of vendors including one that will let you research into unlocking new Descendants to play as. The first time I entered Albion, which is immediately after the first tutorial mission, is when I could definitely see Destiny 2’s design copied over. When interacting with a vendor, it has the same style as in Destiny 2 where it zooms in on the NPC on the left and the flavor text is available to read on the right. Similarly, a lot of the icons that appear over their head are strikingly similar to those in Destiny. From the gunsmith weapons vendor to the even the mailbox, it was almost as if I was playing a Korean-made Destiny 2 knock-off. 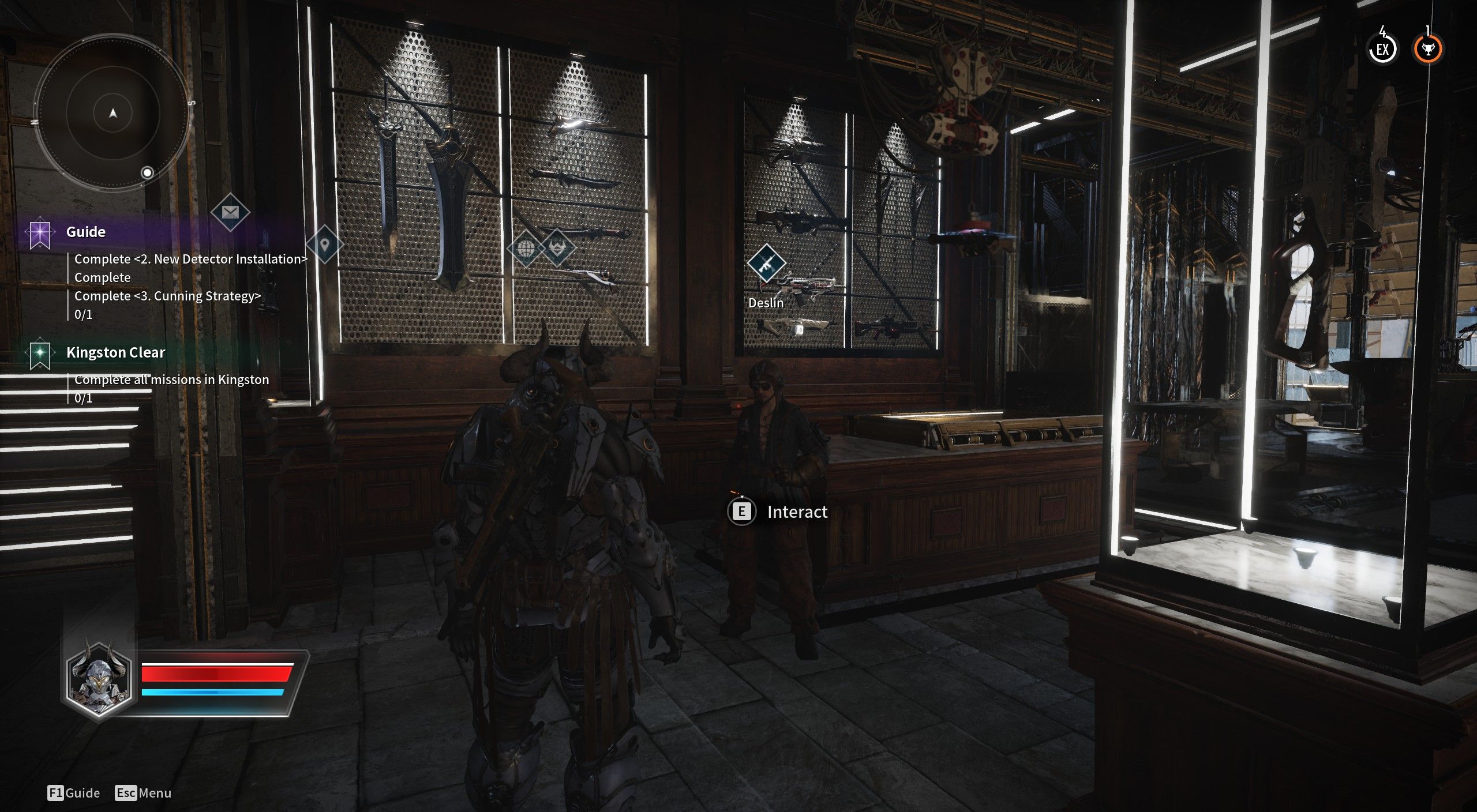 Which isn’t far from the mark. During the preview, a lot of the text wasn’t translated over into English yet so there were still the original Korean Hangul letters visible as placeholders. One time when logging in, the entire language switched over to Korean and for a while I couldn’t figure out how to switch it back. To fix it, I eventually Google searched how to write “English” in Korean and clicked through options in the menu until I found the matching word. Unfortunately, this wasn’t the only element of polish lacking in the preview event.

During my time in The First Descendant, I also experienced a plethora of performance issues ranging from steep FPS drops to stuttering cutscenes and occasional freezes. For the preview, it was recommended that we stick to Medium settings due to the optimization issues, but even on an RTX 2080 running at 1080p it struggled to maintain a constant 60fps. Nvidia DLSS and AMD FSR are supported, but it didn’t seem to offer much of a discernable performance boost. Hopefully, Nexon Games will have nailed down the optimization for performance on PC by the time the Steam beta test launches next week.

Despite all of the copy/paste similarities I noticed between The First Descendant and Destiny 2, there was still a lot of fun to be had. I’m excited to hop in and run missions with friends, and to experience another new loot grind progression. The Rune system has me the most intrigued, and it’s interesting to see a new shooter pull so many key ideas from so many different contemporaries and combine it all together. Ultimately, I want to see The First Descendant succeed in a market that feels monopolized by Destiny 2 and I think it has enough good ideas to see it through. But will they be able to polish it enough, or is this another case of too many ideas without any layers of depth? Only time will tell. We’ll see you when it’s time to try it for yourself when the open beta starts next week on October 20th through October 26th.