The Elder Scrolls Online first dungeon DLC Flames of Ambition, along with Update 29, is on the way. I had a chance to sit down with some of the developers to have a closer look at one of the two new dungeons, The Cauldron on normal difficulty. From visuals to boss mechanics, the ESO team has done a great job making another interesting instance for players to explore.

In recent years ESO has settled into a regular cadence for DLC/Chapter releases, and 2021 will be no exception. The first dungeon DLC, Flames of Ambition, will kick off a year-long story with two dungeons and Update 29. Each dungeon will provide initial elements of the story that is to come later in the year. The Cauldron has the players helping Lyranth, or perhaps it is more accurate to say acting has her agents/minions, once again. Whereas the second dungeon, Black Drake Villa, will pair you up with Eveli Sharp Arrow. The ESO developers invited MMORPG on a dungeon run through The Cauldron to see what is in store for players, and I will say that I was not disappointed. Be warned that this article does contain boss spoilers and for those wondering about the combat screenshots I do use the AUI addon.

Developers Mike Finnigan – Lead Encounter Designer, Jeremy Sera – Lead Content Designer, and Shane Slama – Senior Content Designer/PO Dungeon Team quickly got me into a group. After a quick teleport to my group leader, we were off to the races. Jeremy provided a quick rundown of what players can expect to find in the new dungeon. Most of it is typical for ESO, such as new item sets, a new monster set (Baron Zaudrus), achievements, and a few secrets for players to find. Jeremy also noted that one of the new sets is Dagon’s Dominion. This set focuses on adding weapon damage to your attacks and area of effect abilities for medium armor wearers. 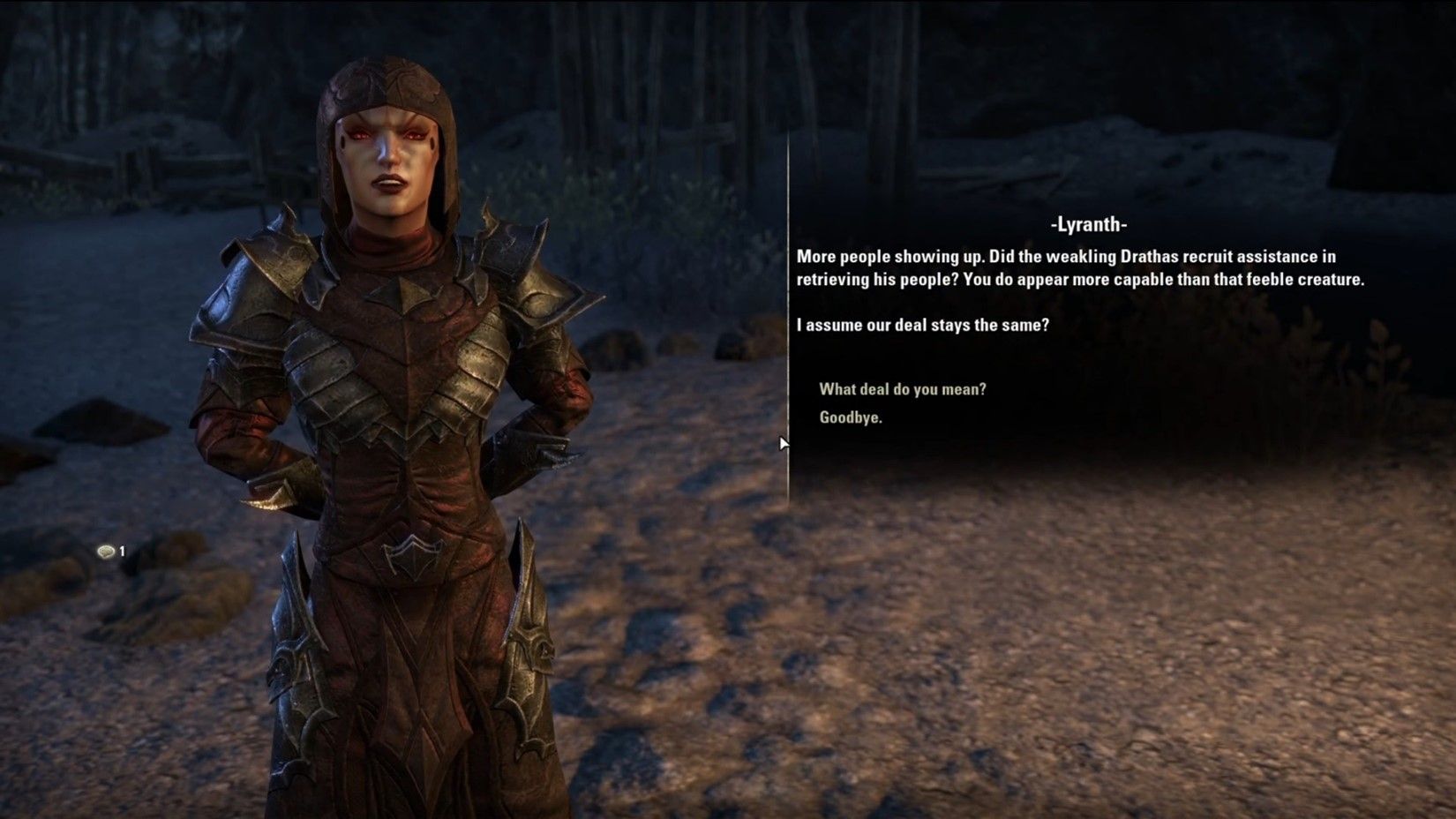 Players will find the dungeon located in Deshaan. Mike explained that whenever the team can, they like to go back and provide a bit of love to the older zones, especially when it comes to the Q1 dungeon DLC each year. When players first enter The Cauldron, they meet up with Lyranth. With her is Drathas, a dark elf who is in search of his family. It seems cultists of Mehrunes Dagon have been abducting dark elves from the surrounding area, and anyone brought to this place has not returned. Lyranth, however, is not helping out of the goodness of her heart. She has hired Drathas to acquire a lockbox. The lockbox, or item within, is protected from Daedra, and in true Lyranth fashion, she doesn’t tell you anything else about it.

Moving to the first few fights, the players quickly encounter Waking Flame cultists that the developers say we will see more of during this year as the story progresses to the chapter itself. The first thing that caught my attention was not the cultist but the environment. Instead of feeling closed in and claustrophobic, like several other dungeons in the core game, The Cauldron has mist crawling on its high ceiling. When I commented on this, Mike said that it is always a challenge coming back to older base game sets like this and spicing things up a bit. But their world builder is up to the challenge once given an idea, and then he kicks it up a notch.

Along with the new cult also come the new Dagon related creatures. These monsters are a twist on ones that players may already be familiar with from other areas. The one I noticed right away was the new Watcher’s that could spin away from your attacks and unleash fire beams of energy.

The Cauldon is your more traditional ESO dungeon with five bosses and an activable hard mode for the final boss. The first boss, Oxblood the Depraved, is in charge of watching over the captives. With that concept in mind, the worldbuilder came up with using cages suspended by chains to help tell the story of this fight space. Mike explained that this boss had a couple of interesting mechanics. One is that he vomits green slimes. These then slowly crawls towards him, and if he manages to eat his vomit, the boss then enrages for a short period. Another mechanic I quickly discovered was that Oxblood will randomly imprison a player in a green honeycomb sphere taking you out of the fight temporarily. Another player will then need to break you out. Overall, a straightforward and enjoyable boss fight to get you started.

As we moved on from our first success, Mike pointed out red circles of lightning that started to appear on the ground. These were a way in which developers are telegraphing mechanics that players may encounter later in the dungeon. After a few more trash fights, we quickly arrived at boss two, Taskmaster Viccia, who uses traps similar to what players saw earlier and large AoE attacks. Drathas jumps in to help us out with disarming traps during the fight. But to be honest, I didn’t find him overly useful. At least he tried. At this point, I started to think this fight may be rough on Veteran difficulty.

After boss two, the dungeon transitions into a lava cave which looks great and immediately made me regret not making a dark elf on the PTS. Players again will notice familiar creatures in this area but with a twist. Mike said that the team wanted to use enemies you would typically see in Deshaan and other dark elf areas. The one that immediately jumped out to me was the fetcherfly hives. Overall, this area was a nice change of pace to help break up the dungeon atmosphere. Our team quickly worked our way along to boss three, the Molten Guardian. Stepping out onto the platform, surrounded by lava, I thought I knew what kind of fight this was going to be. I was expecting the platform to break up or move. Boy, I was wrong. After a lot of AoE, we downed it and all its friends.

Once done with the guardian, players get to have their first encounter with Baron Zaudrus, who quickly abducts Lyranth. The abduction sets up what Mike called a non-standard boss fight. We eventually find Lyranth inside a glowing field surround by energy emitters. Unsurprisingly, she is impatient for us to get her out of it. When the fight starts, one of the players will need to grab the catalyst oil effect dropped by Drathas every so often. They then need to run and tag an emitter and finally run to the center where Lyranth is imprisoned. I have to admit, I sucked at my attempts to do this, and I only managed it successfully once. Thankfully I didn't die to the fire that dropped quickly after completing a circuit. The nice thing about this mechanic is that a group can choose to complete this fight as quickly as they are comfortable with since, after destroying each emitter, a wave of enemies spawns. So if you can tag three emitters successfully, the group may be in trouble... but we all gotta get those achievements right. Once all the emitters are gone, you can finish up the last wave, and the team is off to face the Baron himself. Drathas even gets a patented Lyranth “compliment” for this performance in the fight. 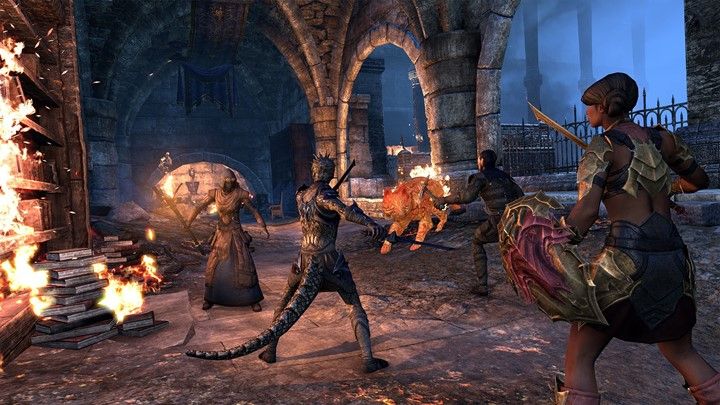 Baron Zaudrus, you know how I said earlier that I was starting to worry how tough Taskmaster Viccia might be on veteran difficulty... I should have saved that comment. Mike compares the Baron to being their heavy metal cover album boss, and he doesn’t disappoint in appearance. The fight involves a lot of movement with moving walls of fire, breakable rock formations, and AoE attacks. You need to watch on both sides as we lost Shane at one point to a horrible firey death. Lyranth will also put up a circle regularly that players can move into and activate, gaining a buff. With this buff active, the rock formations can be one-shotted quickly, preventing them from exploding and spawning more enemies. If that all sounds hectic to read, it was crazy to run through for the first time as well. Once we managed to down him, I finished up the quest turn-in and was able to look around the fight space. Again, my hat goes off to the developers and world builder, the environment was top-notch, and I especially liked how the fire towers added to the space.

To finish things up, since we were not able to play through Black Drake Villa due to a bug that needed to be patched in the coming week Mike was good enough to provide a quick synopsis of what players can expect from the DLC's other dungeon. In it, you will be helping Eveli Sharp-Arrow to recover a book that her unknown benefactor wants. The villa was a home build by the first of the Longhouse Emperors, who were Reachmen that ruled Cyrodill for several decades. These emperors brought Dadric worship to the empire, and within the villa, they built a secret library. When the players first arrive at the villa, the upper floor is overrun by monsters, and the lower level is currently being destroyed by mercenaries. The player will need to find out why the mercenaries are there. It sounds interesting and will provide players with a very different environment compared to The Caldron. Black Drake Villa will have three bosses, each with an activatable hard mode.

After Lyranth has gotten what she wants and we have had lots of practice running around like crazy from lighting AoEs/firewalls, not to mention trying to keep a boss from eating his vomit. (There is a line I never thought that I would write.) What is my final thought about The Cauldron as a dungeon? It was a lot of fun to run through this with the developers. It has a great mix of environments as your progress from boss to boss, and the amount of what many players would call trash mobs was not bad at all. The travel/fight time between bosses is reasonable and kept things flowing smoothly.

Like most boss fights in ESO, once you get by the flashy effects, the mechanics are not quite as rough as you might first perceive them to be, except when it comes to certain fights. The downside for some will be that ultimately this is just more of The Elder Scrolls Online that has been refined/polished over the past X number of years. If you don’t like the combat and/or world setting this DLC will not do much to change your mind.

The atmosphere was amazing, and the story was good. Overall, it did a good job at piquing my interest for what is to come later in the year, and I can't wait to play around with some of the new gear sets using my existing character builds. Jeremy also assured me that we would see more of Lyranth as the year-long story continues to unfold, and that is perfectly fine by me.

The Elder Scrolls Online first dungeon DLC Flames of Ambition along with Update 29 releases on March 8th for PC, Mac, and Stadia. March 16th for Xbox One and PlayStation 4.