Oftentimes I judge how interactive a world can be by whether you can actually sit in a chair randomly in a room. Some MMOs just have your character pull a chair out of their own little Bag of Holding and plop down, while others allow you to inhabit the carefully placed chairs in any room.

Now, thanks to one of the major additions to The Elder Scrolls Online: Firesong, I'm going to start judging how interactive a game world is by how many Good Boy dogs you can pet in the world.

The Elder Scrolls Online: Firesong is the story DLC that rounds out this year's Legacy of the Bretons storyline, takes players to the island of Galen, one of the islands in the Systres, aiming to help fend off both the Firesong Circle as well as the Dreadsail Pirates that hound the archipelago.

As the last story DLC in the year-long Breton storyline, the new DLC brings hours of content, culminating in the conclusion of the story of the Ascendant Order and finally unmasking the mystery of the Ascendant Lord. Players who have been following the political intrigue of the year-long story, especially since the events of this year's major chapter release, High Isle.

However, back to the animals.

The Elder Scrolls Online is effectively turning parts of Tamriel into a petting zoo, giving you the ability to interact with some of the animals around Galen. It was pretty cool to actually walk up to a horse or a dog in Galen and pet them, kicking off a short little animation that sees you cuddle with the animal. We had the chance to check out the new area in a guided tour by ZeniMax Online Studios last week, who described the decision to include these pettable animals as a way to make Tamriel more interactive.

It isn't just any animal in the MMO you can walk up to and pet, however. There are only specific ones you'll need to find, but if you do with all of them you'll earn an achievement, which is pretty cool. However, I truly did feel a bit more immersed. Yes, most of the animals in the world are window dressing, just backgroun extras in the wide world of the MMO. But for those I was able to interact with, it just rooted me in The Elder Scrolls Online even more.

The new island of Galen is pretty big by all accounts, and unlike its Systres cousin High Isle, Galen feels a bit more down to earth. Instead of the high-minded noble class of the Bretons wandering about, Vastyr, the main settlement, is more for the working class Breton and Tamriel traveler, and the city itself reflects this. Unlike ESO High Isle's Gonfalon Bay, which felt built for show and splendor, Vastyr feels as though it was wrought from the world around, taking cues from the environment to influence its design.

And this is no more on display than in the the Druid sector, which felt old and ancient, as if the city sprang up around it rather than was built nearby. The team at ZeniMax has done a great job creating this blend of old Druidic culture and the Breton high fantasy influences that really works, and Vastyr feels like the high point of that endeavor here.

Walking through the city, it was cool to see a row of stonebrick buildings along the road, but then come to a large wall full of druidic runes, neither one feeling out of place or at odds with each other. Entering the city through a large gate that leads through a small cavern into a stone archway that opens up to Vastyr proper felt unique compared to some of the other, more open cities we've seen in Tamriel. It was a rather cool moment during our preview. 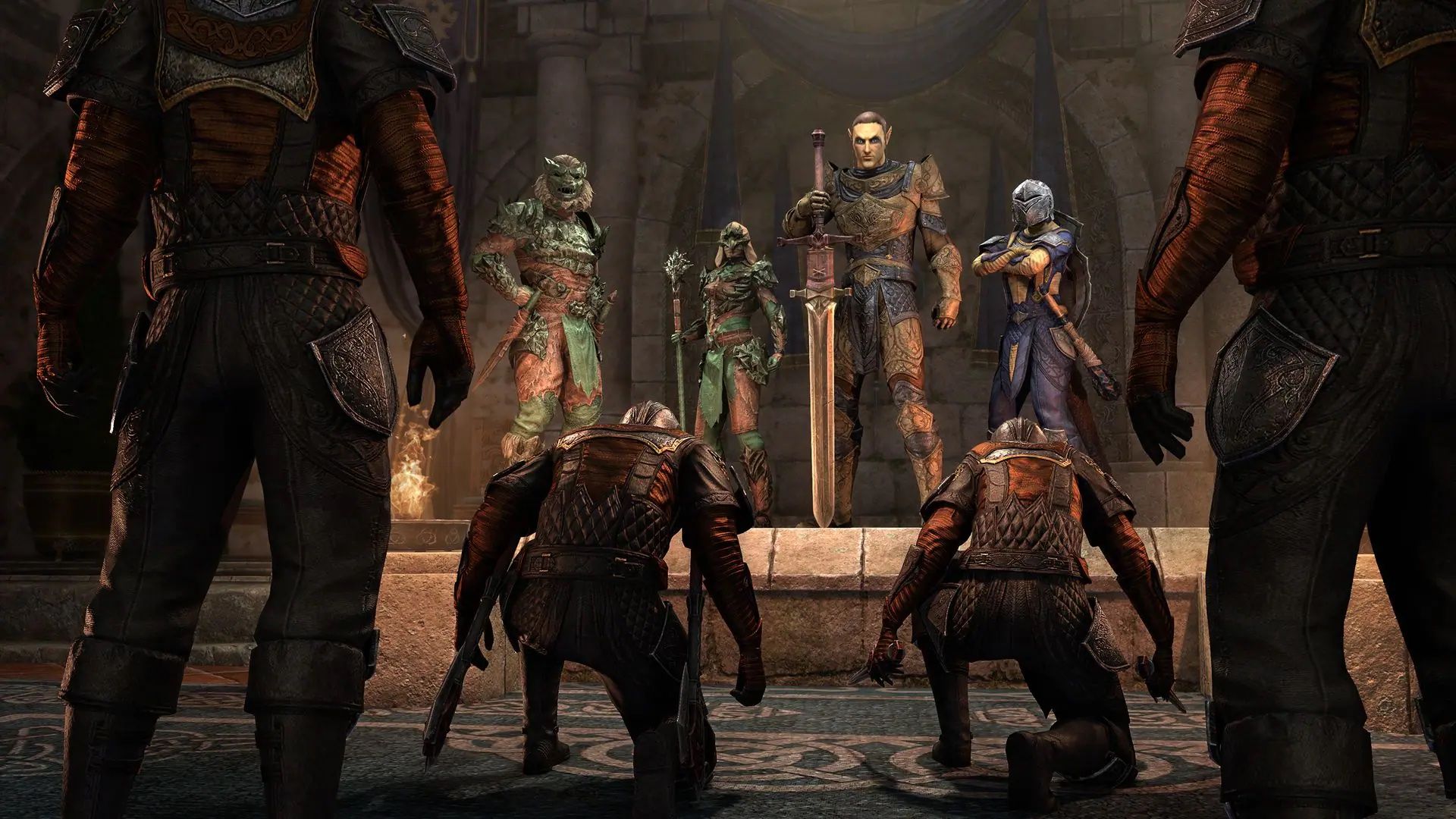 The world of Galen, though, isn't just segmented to the capital city of Vastyr. Other settlements, such as the Druidic glades of the Firesong, as well as even a few pockets of Sea Elve pirates dot the landscape, as do the various world dungeons and bosses for players to explore. We see some returning content form The Elder Scrolls Online's foray into Oblivion with roaming world bosses such as giant ent-like Dryads roaming the world, though others are still static, sitting at the predefined locations for players to get the jump on them.

However, Galen, while it portrays the same Mediterranean vibe that the other islands in the Archipelago does with its sunshine, seemingly mild climate, and fields of flowers in bloom, isn't all sunshine and rainbows. As we moved through the island, we ended up roaming through a wild jungle, reminding me a bit of the dense jungles of both High Isle's Amenos and the base-game's Grahtwood. It was a nice change of pace, especially seeing the little atmospheric touches that ZeniMax as worked on play out, such as monkeys swinging from tree to tree. This echoes some what the team is doing in creating a more diverse and dynamic environment, such as the extra ships sailing in Gonfalon Bay, or even the roaming Knights on High Isle in ESO's last update. These seemingly "small things" add so much overall to building out how the world looks that it can't help but impact how it feels roaming through it as well.

At the heart of all of this is the crackling volcanoes erupting and issuing magma onto the landscape of the Systres. These fissures really help to create a landscape that feels alive and active, as if any moment one could open in front of me and shower me with molten lava. And of course, there is the giant volcano in the distance, looking upon the island menacingly as if at any moment it could erupt. It's an interesting dynamic, especially when you compare it to the other major volcanic zone of Morrowind, where the Dunmer have just learned to live with the ash and the fallout from the eruption. High Isle and its sister isles feel very much on edge with the threat.

Druids themselves are a huge part of The Elder Scrolls Online's Legacy of the Bretons storyline, and while Tamrielic inhabitants might be more familiar with saving the whole world, the story being told with these unique weilders of magicka aims to be more grounded than ever.

The Druids themselves are something of a pet project of the ZOS team, as they really are only mentioned way back in Arena. As such, there was a ton of inspiration being taken by real-world locations and histories, such as the Druids of the British Isles and Stonehenge, to the Stone Faces on Easter Island. Creating the areas the druids inhabit, such as Glimmertarn which is the home to one of the Stonelorn Druids, they feel as though they natrually just belong here. The art and world teams at ZeniMax has done such a great job bringing this culture the ZOS team has fostered to life in a way that I'm hoping we see much more of the Druids themselves in future sets. Maybe a new class? 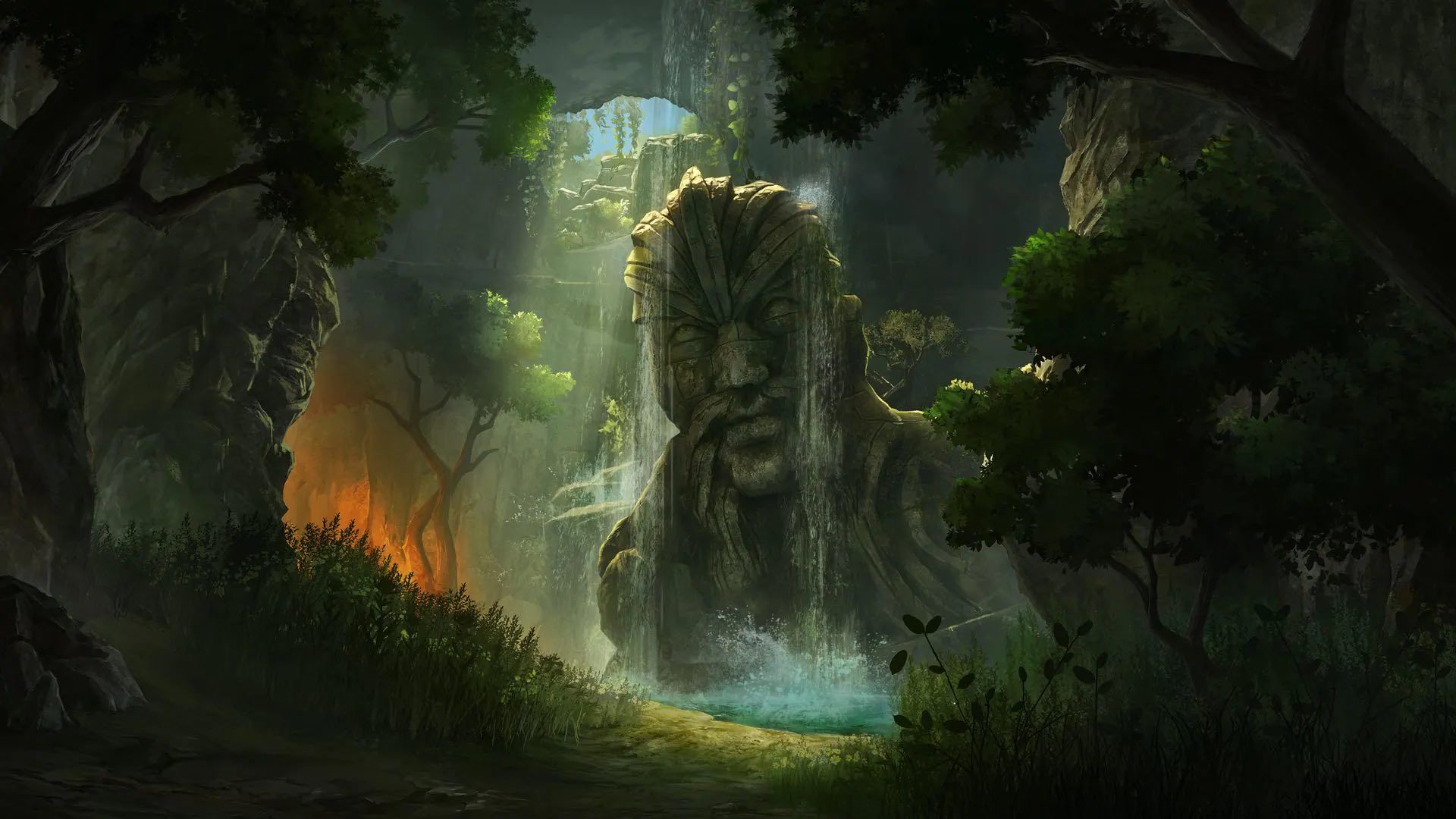 One way the Druids will travel with players is through the new Druid King Tales of Tribute card set, which players can unlock by playing through the Elder Scrolls Online Firesong's content. This new card set is one of the first to release and shows that ZeniMax plans to support the new tavern title in future updates, much like they do the Antiquities system and more since they were released into the MMO. I do appreciate that I'll have to work at gathering the card set fragments versus being able to just buy it all from a vendor, and I hope that the benefits having the deck brings to a Tales of Tribute game is worth the time it'll take to track every piece down. Time will tell.

As with all Elder Scrolls Online content, Firesong can be picked up and played right away, despite it being part of the year-long Breton storyline. However, like all end of year DLC releases by ZeniMax, there are additional quests to cap off the year-long story and bring it all to a close. Firesong is no different.

What this means for the Legacy of the Bretons and where they go from here will remain to be seen. How the story of intrigue and turmoil told during High Isle's runtime is closed will be revealed once you've completed Firesong. And for myself, personally, while I did find High Isle's story itself a little too predictable, it was nice to have a down-to-earth story being told rather than one that spells doom for everyone if you, and only you save Tamriel from disaster. I feel ESO is better when it's telling more localized, focused stories, especially considering it requires a might suspension of disbelief that you are the Hero, despite other similarly clad heroes around you talking to the same quest giver. I can only hope that, while the large set pieces of Gates of Oblivion or the storyline surrounding Greymoor's quest chains were great, I admit I much rather enjoyed a break from holding Tamriel on my shoulders the whole time.