When The Ascent first debuted during the "First Look Xbox Series X Gameplay" livestream in May 2020, it immediately caught my attention. An isometric action shooter with RPG elements? Diablo with guns?! Now one year later I've been able to go hands-on with the game thanks to the team at Neon Giant, and after two hours I really like what I'm seeing.

The story of The Ascent follows a single Indent, short for indentured servitude, as he's called to a job for some jerk working with the aptly named Ascent Group, the largest corporation on the planet. All indents are equally bound to like-minded corporate jerks--"slaves in all but name" as the demo clearly spells out--getting their hands dirty so the corporates can live the good life upstairs. My guy is tasked with figuring out why a waste management system is backing up and fixing it, taking out any hostiles along the way.

Before I do anything though I need to customize my character, and The Ascent gives me a decent set of options. Gender, skin color, hair, outfit, it's all here and available for my special Indent. The RPG elements continue into the main game, where every level up allows me to assign skill points to certain stats in order to build the character I want.

Weapon Handling makes me reload and swap weapons faster, Vital Signs bumps up my maximum health, and increased energy for special attack are three of the eight options I'm given. There are other customization options outside of stats, including stat-boosting buffs called Augmentations and lootable weapons and armor found throughout the game, and all of it lets me turn my Indent into the kind of warrior I'm most comfortable with.

This focus on customization is good, because the action gets intense quickly and knowing I have the right build is key. The Ascent is essentially a twin-stick shooter, with one stick moving my character while the other turning his body and aiming the gun. Weapons fire in a straight line depending on which way I'm facing, meaning I have to make sure enemies stay in front of me if I want to take them down. This feels uncomfortable for a while, like it's difficult to properly defeat enemies simply because the controls are odd. 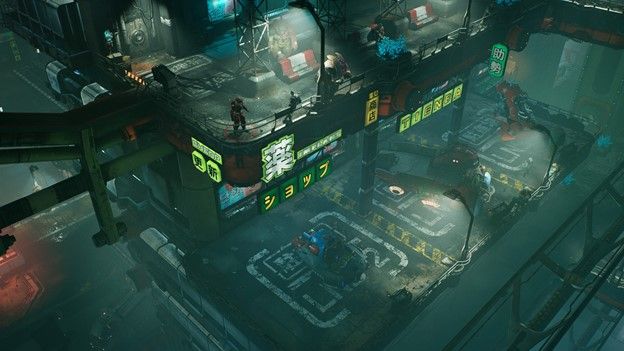 This difficulty is buffered by the aiming system, which at first resembles standard shooters. Aim with the left trigger to raise the gun, fire at will, easy peasy right? Wrong, because The Ascent brings height into the equation whenever I am aiming, so if an enemy is small and I'm not shooting from the hip I won't hit it. Similarly, if I'm hiding behind cover and I don't hit the left trigger to blind fire over it, I will shoot the wall. It's a funky system that I'm not entirely on-board with, though I do admit it feels very natural after a while.

The words "action", "shooter", and "isometric RPG" don't always go together, so I asked Neon Giant's co-found and creative director Arcade Berg how much thought went into getting that ratio right. "In the early builds before we added the planned RPG elements," Berg says, "we found the game is really fun to play without them. Despite this we still wanted to give the action fans more depth and broaden their horizons a bit. However, we didn't want to scare away the action fans that don't want to mess with numbers, nor did we want the RPG fans to feel like there was nothing here for them. Finding that balance was important to getting the game right." 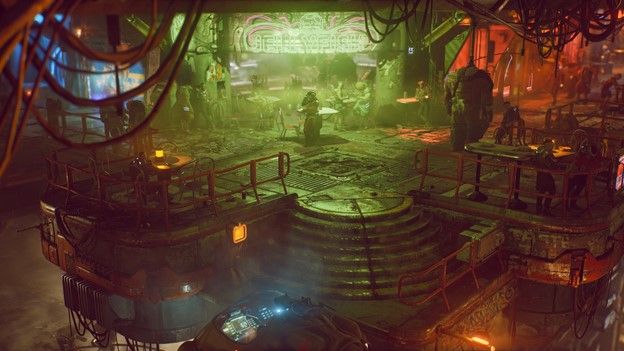 While the game's action/RPG balance feels right, it doesn't stop The Ascent from being super hard at certain points. My demo consisted of the first two missions of the game, and the difficulty spike between the two was hard to ignore. A lot of the difficulty, if I had to choose one thing, has to do with enemy placement; when I clear out an area and walk to the next skirmish, I should not have to worry about more enemies coming from behind me. I just killed all of them, why are they coming back? That seems counterproductive!

I will say that the game never feels impossible, it's easy to determine what about the fight has gone wrong and how I can fix it for the next try. It also helps that all EXP and stat boosts are retained after death, so I can still level up even after repeated deaths in the hopes that the stat upgrade will put me over the edge. In fact that's exactly what happened in the final boss fight of the demo; I was getting railroaded by the enemy swarm, and after three quick deaths I leveled up, threw every point into the Vital Signs category for health, and was able to outlast everyone.

The Ascent drops you right into a dystopian futuristic world and asks you to start shooting, maintaining a keen balance between explosive action and strategic RPG character building. The sizable suite of customization options give my character a personal touch, and the story already takes a few interesting twists that leave me wanting more. I never thought I'd say this about myself, but I'm looking forward to experiencing a bit of indentured servitude when The Ascent drops July 29 on Xbox Series X|S, Xbox One, and PC.