If you play any kind of monster collecting or gacha games on mobile, you’re probably already familiar with Summoners War, a popular IP put out by Com2uS. After Lost Centuria was released, it also shouldn’t be a surprise that they’re now trying their hand at a mobile/PC crossover MMO. I had a chance to wander around and kick tires for a few days, and honestly? It’s about on par with their other offerings, it’s flashy, potentially addictive, cute and while not particularly innovative, it’s a solid example of other successful entries in the same category.

If you’re not interested or you dislike mobile games and their standard practices, you should probably stop reading now. Because this is, very much, a mobile game. It has all the menus, in fact, probably more menus than I have ever seen in a game. It has a ton of purchasable packages, and yes, it does ambush you with sales from time to time. That’s, honestly, gotten pretty standard for mobile offerings now, so if you can’t stand those things, then there’s no point in me talking to you about graphics or gameplay, because you’re already going to hate this game.

If, however, you do play mobile games from time to time and have developed that lovely thickened skin that allows such things to bounce right back off without noticing the mild irritation, read on. Because, honestly, Summoners War: Chronicles isn’t bad, and if you’ve played or enjoyed their prior offerings, there’s a good chance you might enjoy this one as well. Com2uS may not have intended it, but running out an MMO after you’ve built up a playerbase was probably a wise decision. I should also, before we get much farther, admit I did get an account that was preloaded, but for the interests of accuracy, also played around with a free account with no currencies but what I earned, since only playing a whale account (yes, they literally named the character “whale”) doesn’t really give a good idea what to expect. 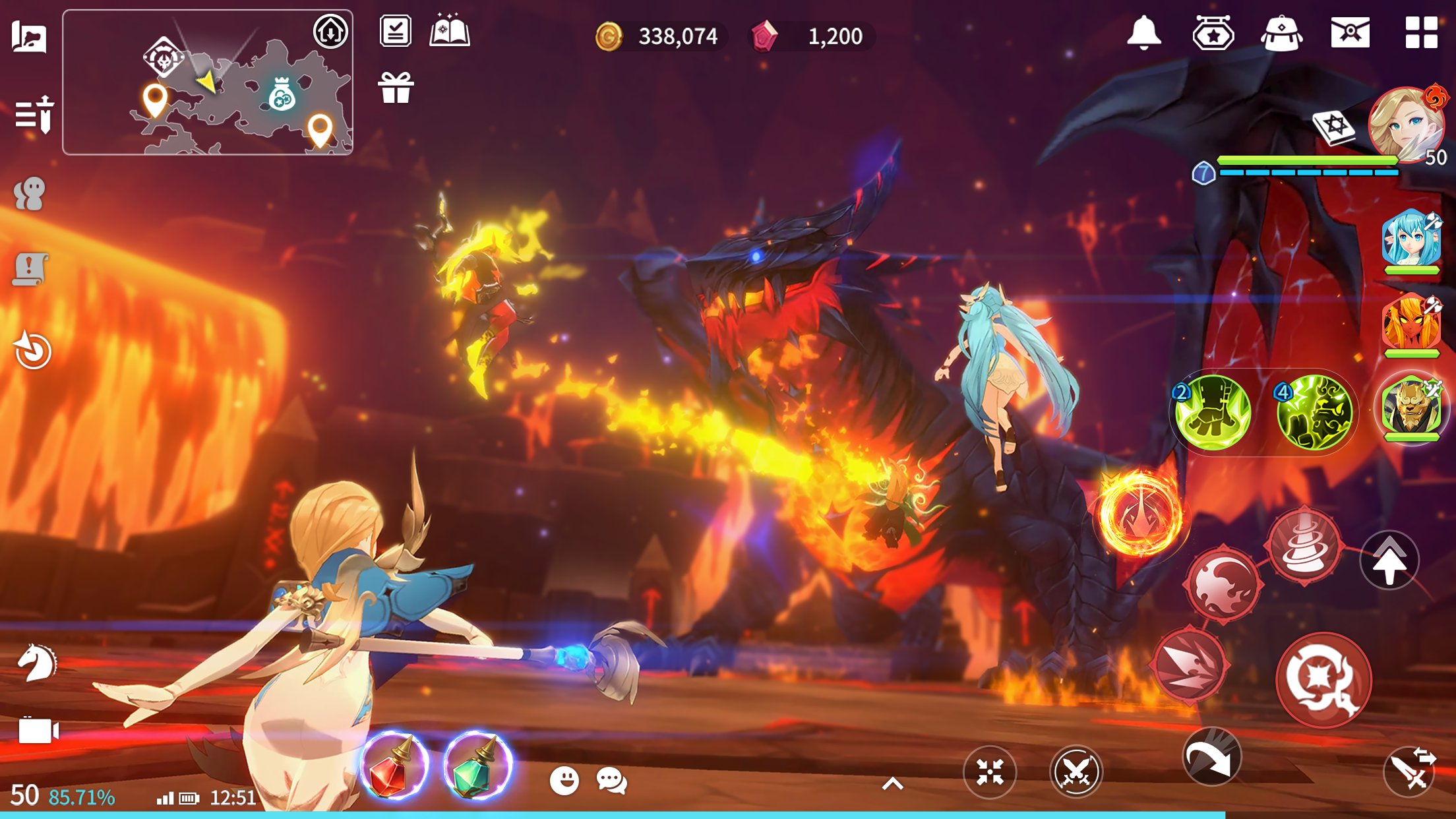 So how does it play? Well, the gameplay has your standard autoplay options, except in dungeons where the option is removed. There are no major changes to the standard formula, unless you count being able to swap on the fly which of your three monsters you take abilities from as opposed to having to choose ahead of time- to be new. The quests are standard and sadly I didn’t have the time to get far in the plotline, but it seems like it’s also following the standard formula of bland but reasonable.

What did I like about it? It’s pretty, if simplistic, and keeps the feel of a Summoners War game. If you’ve played them before, there will be plenty of pointing-at-the-screen as you notice certain creatures or scenery or other miscellanies that remind you of their other games. I was pleasantly surprised when I noticed their cut scenes were done in 2d animation-anime style-rather than the typical stiff and awkwardly puppeted character models. Some might not like it, but for me it was a nice change. I wish more games would do so, but I suppose that’s a matter of taste. The music is also surprisingly good-it won’t win any awards, but it’s better than I’ve heard for a while. The voice acting is much the same-surprisingly good, but not great, and I wasn’t, unlike most games, waiting until I could mute the game for some peace and quiet. For me, that’s pretty rare.

I can also say I was pretty happy about the sheer amount of stuff to do. Like most mobile offerings, you need to put in more hours to unlock more gameplay, but there’s a lot waiting for you as you go up the levels, and while some might not like the slow drip content idea, in this case, I’d almost say it was necessary so as not to flood players as soon as they get past the tutorial. Of course, the fact it increases the length of time players stay playing doesn’t hurt either, but being a digital browser when it comes to games, I like a bit more variety, so having the options there to try out different content instead of being stuck with the same repeats of quest/grind/arena is kind of nice. I mean, quest/grind/arena is still there, but there’s more than just that.

What did I dislike? Pretty much the standard. The sheer number of packages for purchase, none of which I have any idea on the pricing because they weren’t made available at the time I played, and the fact I got occasionally ambushed with sales while flicking through the menus to look at summoning, collections or other. I don’t like that, as cute as summoner’s war can be, it’s probably going to have parents feverishly implementing blocks on tablets and cellphones to make sure their kids don’t empty retirement funds in hopes for a Dark Ifrit pull. 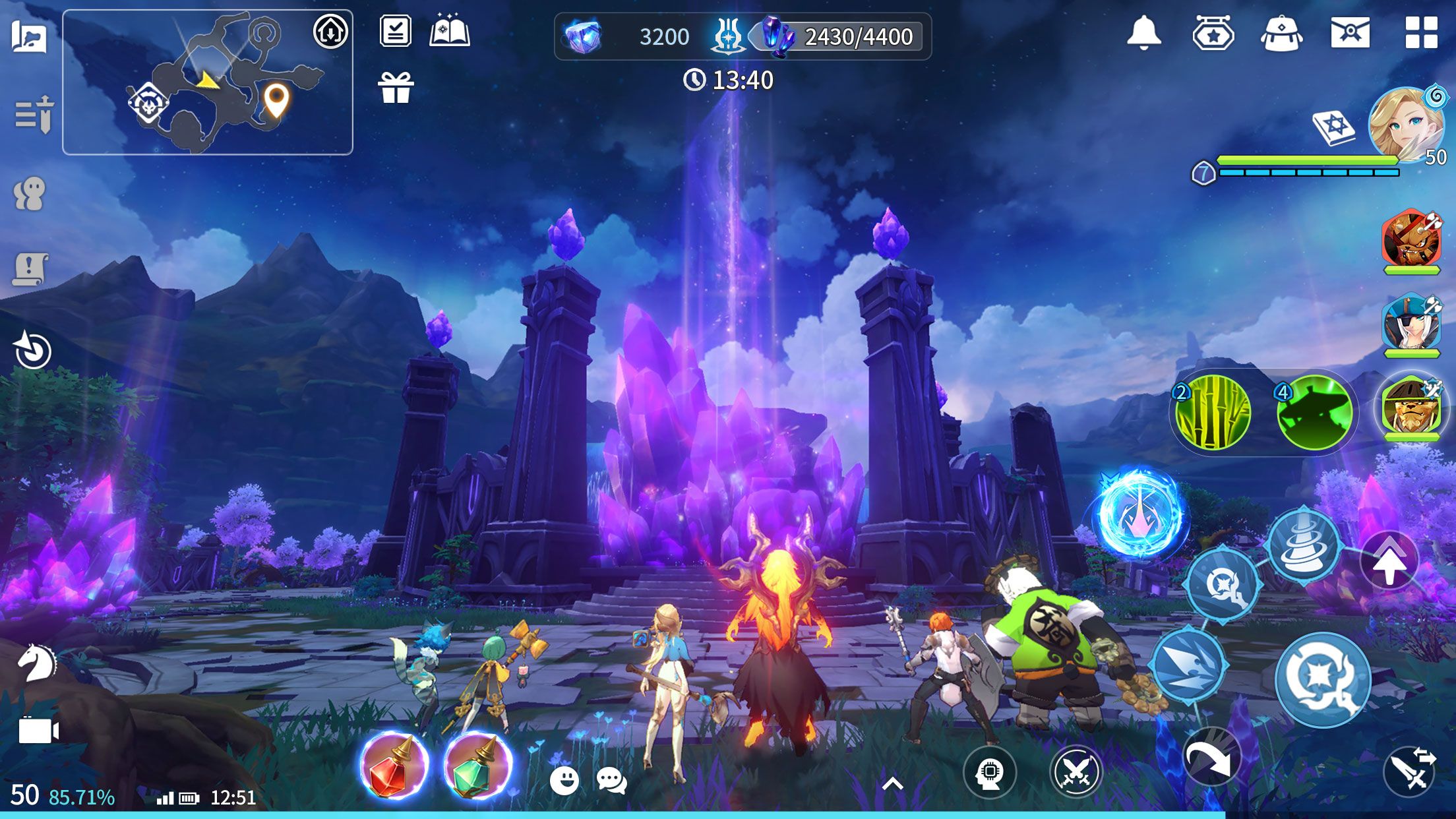 As bright and shiny as Summoners War: Chronicles is, it’s going to likely be popular with kids, so when you have sales popping up in your face as you navigate the game, you can bet that some will be lured. I’m not so keen on that. I will say, after playing with my loaded account, that putting money in will get you more toys, but it won’t put you that much farther ahead until you hit end game, so I guess there’s a bit of mitigation for p2w, but how much is hard to say-especially since I was only playing around pre-launch. What was I kinda meh’d by? Honestly, a lot of the game is pretty standard. Don’t look for anything groundbreaking or innovative here. I mean, don’t get me wrong, there is a lot of stuff to do, but it’s all fairly standard. It’s more like Com2uS took all the various common activities and threw them all into Summoners War: Chronicles.

The graphics, while I liked them, they’re not phenomenal by any stretch, though they’re nicely vibrant and crisp, no one’s going to have to worry about getting a new card or phone to run this. You’re never going to have your socks knocked off by a stunning vista, though, if you like cute stuff, some of the monsters might get a smile.

So, what can I say as an overview from what I saw of the prelaunch content? Summoners War: Chronicles is, all in all, a solid addition to the Summoners War IP. If you like the franchise and/or dabble in mobile MMOs, you’ll probably enjoy it-at least for a few days, maybe even weeks. I expect there is a definite section of Summoners War players who will migrate and choose to stay. I can see it doing quite well and earning both defenders and detractors on both sides, which I mean, is a win-win, because division breeds exposure, which brings in more players. Do I think it will be a big name? No, of course not. But I wouldn’t be surprised if it attracts a fairly healthy audience and keeps it for quite some time-assuming that their funding model isn’t awful enough to drive them away entirely. It’s honestly not a bad game, it’s just very mobile-with all that that has come to mean.