Riding the success of its Warhammer: Vermintide series, developer Fatshark is poised to release a successor in the 40k universe later this year. While Warhammer 40,000: Darktide isn’t planned to officially release until November 2022, I was able to get a taste this weekend with the first closed beta test.

Not surprisingly, the developers have borrowed a lot of what made Vermintide and Vermintide 2 popular and remolded them to fit the 40k universe. So will Darktide be worthy of the emperor, or fuel blood for the blood god? Let’s take a look at what it has to offer so far.

One major benefit PC gaming often has over its console brethren is the ability to tweak in-game settings for performance, or to max out visuals to get that perfect screenshot. However, if the developer doesn’t provide the right variety of options, even the best PC rigs can’t do a whole lot. Thankfully, Fatshark provides almost everything you could possibly want to customize your gameplay sessions.

There are minor quality-of-life options, such as subtitles and text size/opacity, completely customizable keybindings, controller sensitivity and dead zone threshold settings, and the option to choose which sound effects are audible during a match. The video options are fairly inclusive with standard resolution and window settings, VSync, and graphics quality settings. Some advanced settings include a field of view slider, upscaling, ray tracing, motion blur, lens flares, decal counts, and ragdoll physics. Unfortunately, a few important accessibility options do seem to be missing, such as colorblind mode. 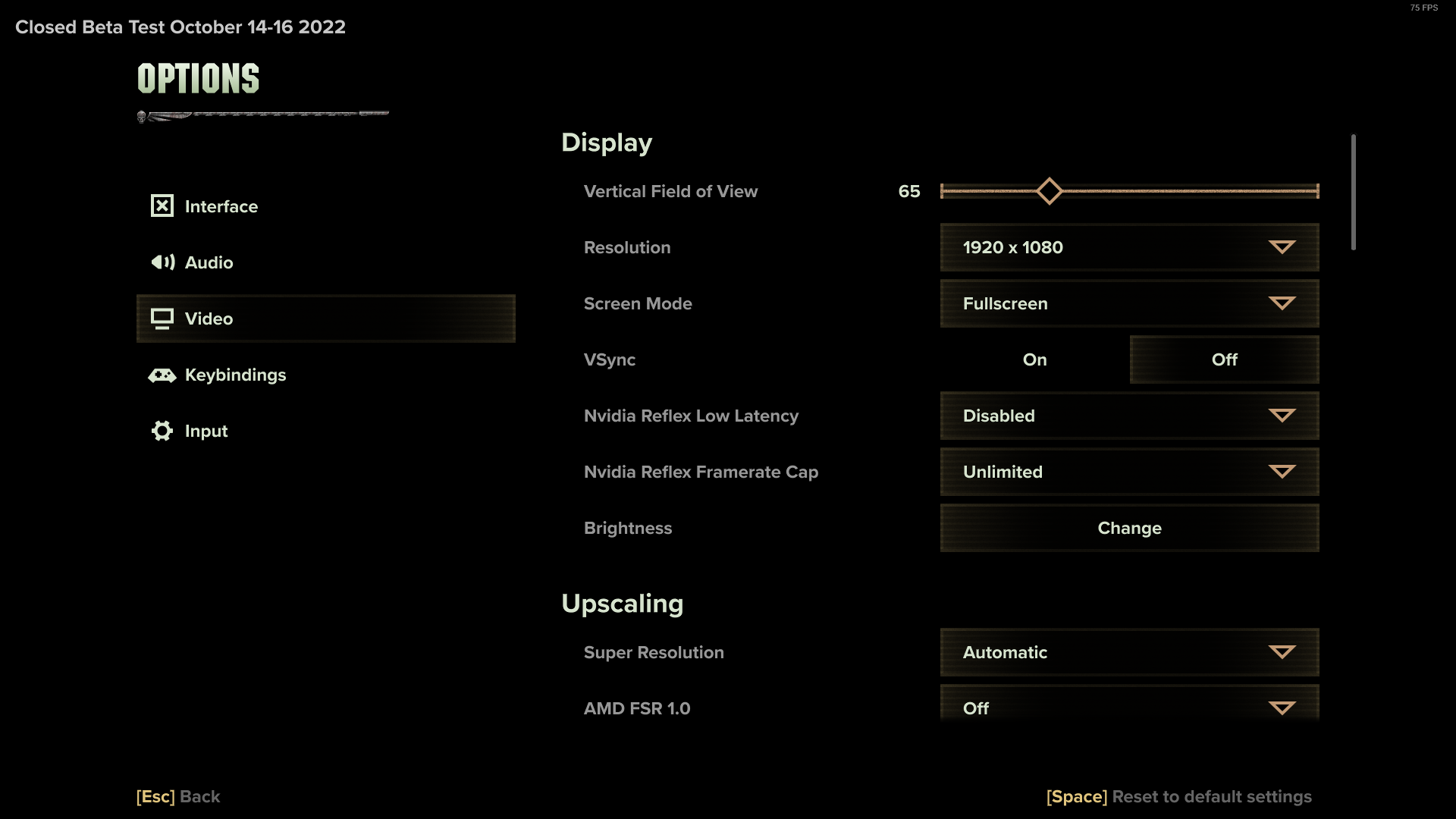 While these settings might seem like overkill, the option to modify your gameplay for peak performance appears to be quite important during the beta test. As someone with a relatively powerful laptop (RTX 3080m and i7-10807H), I struggled to find a setting that would play at a stable 60 FPS. In the end, I had to settle at 1080p with graphics between Low and Medium in order to keep the game at an enjoyable framerate during intense battles.

Despite this, I still dropped below 30FPS when my screen was full of enemies, and I heard from multiple teammates that they were having difficulties with dropping framerates as well. Additionally, it feels like the game has a memory leak problem, as performance becomes worse the longer you play. Obviously, this is a beta test and Fatshark has time to improve performance, but anyone with a ‘minimum specs’ PC is likely going to walk into an unplayable mess.

Currently, Darktide has 4 class options: Veteran Sharpshooter, Zealot Preacher, Psyker Psykinetic, and Ogryn Skullbreaker. Sharpshooter and Psyker are the ranged DPS, focusing on guns and kinetic energy, respectively, while the Zealot is more melee oriented and the Ogryn is a massive tank. 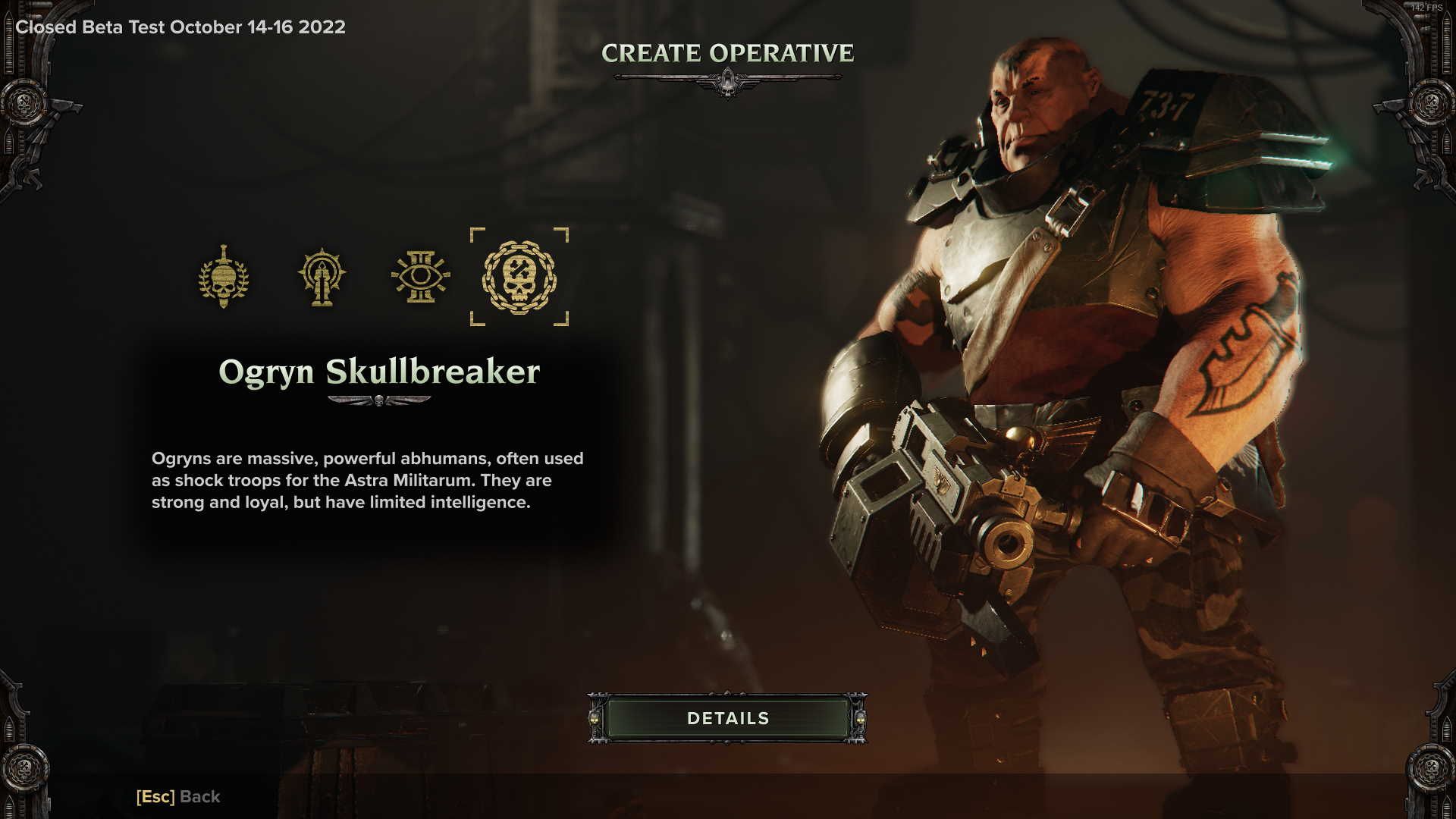 Outside of choosing your class, there isn’t much impactful customization. There are a handful of visual customizations and you can pick your backstory, but none of this appears to have any effect on your fighting aptitude. Additionally, most of the cosmetic choices are deliberately ugly. While this likely makes sense from a lore perspective, not everyone is going to appreciate looking like a hobo who cuts their own hair. In terms of graphical fidelity, however, Darktide is quite gorgeous and has some great attention to detail from tattoos and arm hair to pock marks and wrinkles. 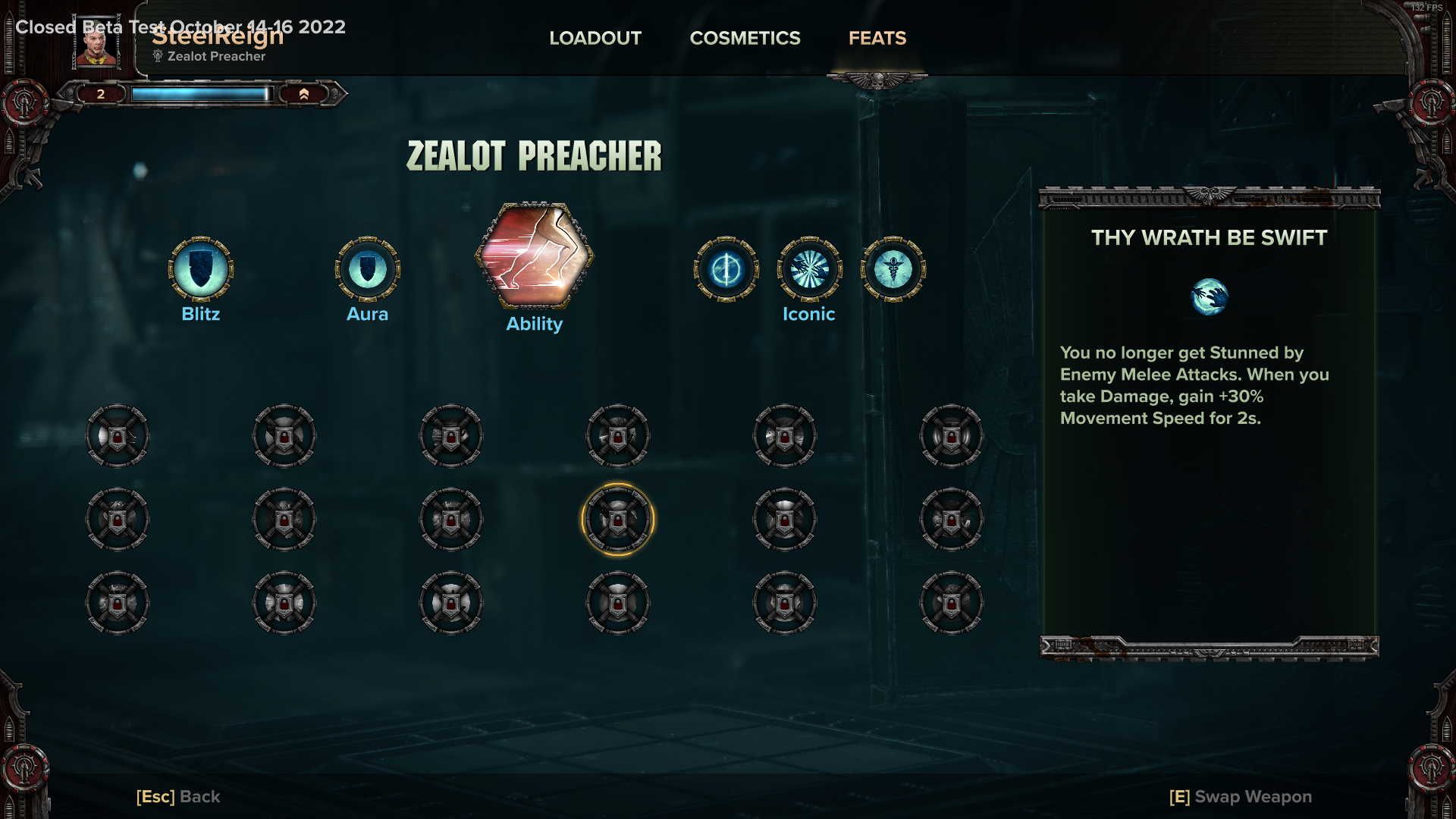 Once you start running missions, there are a handful of ways to upgrade your character. First off, new melee and ranged weapons can be obtained by completing missions or buying them at the armory. Each class has a couple of unique weapons that makes them stand out. Clothing can also be altered but it’s only cosmetic at this point. Finally, there are Feats trees that help classes specialize in their roles. For example, the Preacher can take talents that improve their team’s toughness, individual toughness or make their melee attacks even deadlier.

Slaying Heretics for the Emperor

None of the aforementioned really matters if the core gameplay loop isn’t satisfying, and so far…it is so very satisfying. While Darktide doesn’t have a true campaign, its story is told through a series of missions that are unlocked on timers and/or at certain player levels. I personally would prefer a more cohesive campaign, but this seemed to work for Vermintide 2 and Fatshark is sticking to its formula.

Each missions follows a similar pattern. Go from point A to B, kill a ton of heretics on the way and interact with the environment based on the mission parameters. Typically, there are a couple of objectives to complete before the final mission, which varies depending on the map. This includes things like retrieving an ammo cache, assassinating an enemy, or restarting a cooling system to save a station from overheating.

The objectives themselves are mostly standard stuff and not really the main focus of the game. They’re simply a means to an end, and that end is to kill a crap ton of heretics. This game can seriously throw a ton of enemies your way. Even similar horde style games like Left 4 Dead 2 can pale in comparison to some of the fights in Darktide. At times it feels like hundreds of enemies are just pouring in around you and grenades barely make a dent in the swarm.

When performance isn’t an issue, both the gunplay and melee combat feels smooth and rewarding. The ranged weapons are very responsive and it’s quite satisfying to explode heretic heads from afar. However, ammo is pretty limited, at least in the beginning levels, so a lot of the fighting will be melee.

Depending on the class, you’ll get a sword, axe, shovel, or some other sharp or blunt object. While fighting with a melee weapon you can use light and heavy attacks, block and push enemies away, and counter-attack. Normally, melee weapons feel secondary in these types of games, but even a humble shovel is sufficient to bash in heretic faces.

In fact, it feels like melee weapons can be the superior choice depending on your class and the enemy you’re fighting. For example, the Plague Ogryn boss is an absolute bullet sponge. If you try to kill him with your gun, it’ll likely eat all your ammo and still be standing, so smashing it with melee attacks is usually the best option if you’re not low on health.

Although each class has a unique special skill and passive abilities, the four classes don’t play particularly different with the exception of the Psyker, who can use energy to explode enemy heads and is more of a glass cannon than the other classes. The Sharpshooter is definitely more proficient with ranged weapons and can increase gun damage temporarily with their special, but they’ll also be using a sword as often as the next class. The Zealot and Ogryn are tankier and have melee oriented specials but still have access to sufficient ranged weapons. 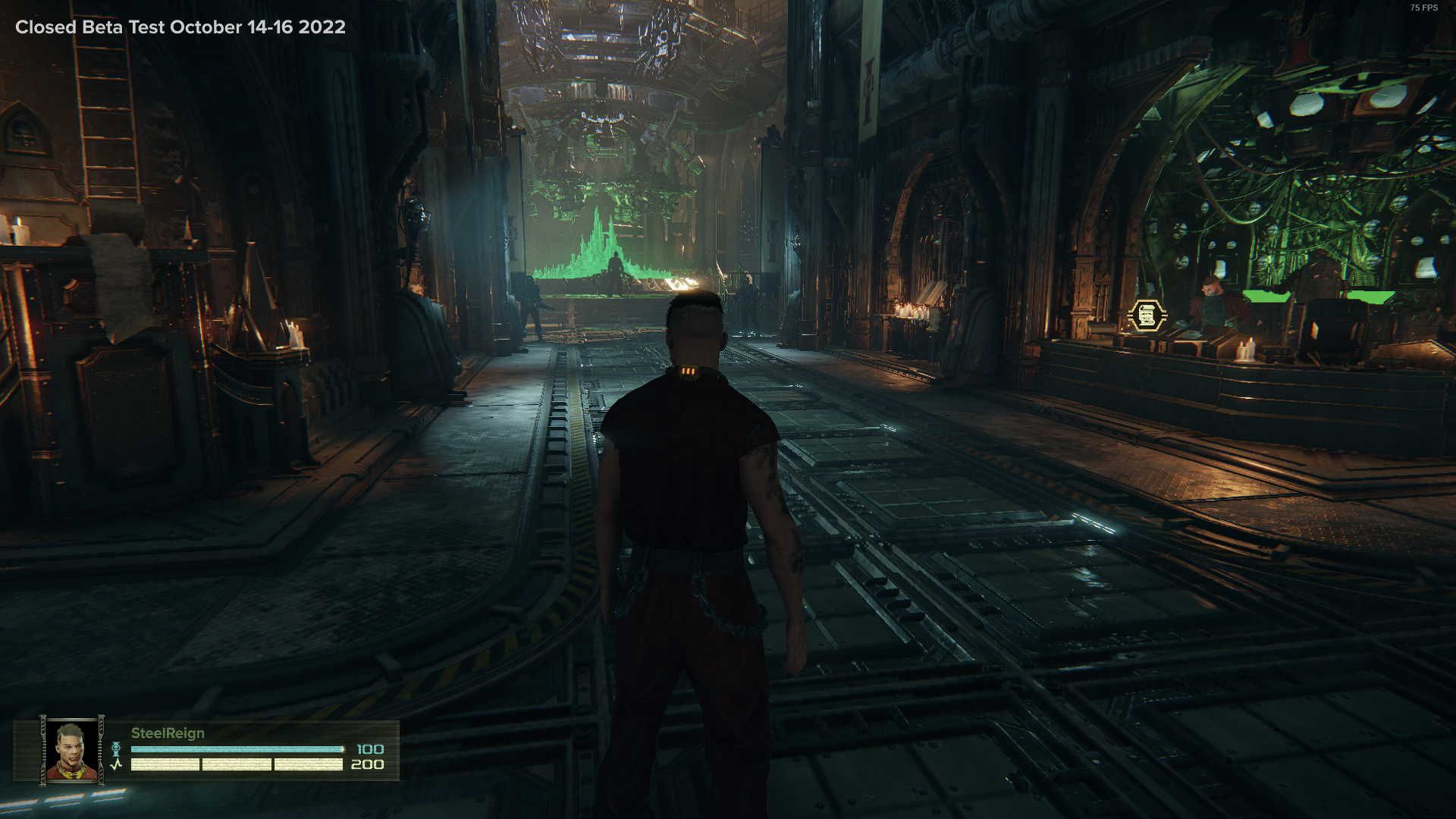 At the moment, Warhammer 40,000: Darktide has a fantastic shell, but there are a lot of minor things that could use improvement. For starters, the mission hub area is pretty bare bones. Fatshark has done a great job with the Warhammer 40,000 aesthetic, but there’s not much else there besides the training center, mission hub and armory.

Additionally, the maps themselves are highly detailed and fun to play but all kind of blend together, and there are a lot of quality of life improvements that would improve gameplay, such as an ammo counter for your teammates or a mini-map. More classes with specialized roles and enemy types would also help provide a lot more gameplay variety and prevent things from getting stale. Finally, performance and optimization really needs work before Darktide goes live.

If you’re interested in joining future Beta tests, Fatshark has been doing signups through the Darktide Steam page, or you can wait until the planned release date on November 30, 2022.