Genshin Impact isn’t the only great game to come out of China recently.  Han-Squirrel Studio, a Chinese-based developer, has delivered one of the best games I’ve played in recent memory.  Sands of Salzaar is more than just the aRPG it may look like at first glance.  It boasts deep features and gameplay mechanics that result in an experience that’s like a fusion of Diablo, Divinity Original Sin, and Dynasty Warriors wrapped up in an Eastern themed world of bandits, demons, heroes and villains.  Confront bandits on the roads, siege strongholds and towns, explore caves and dungeons, and conduct huge battles that unfold before your eyes - Sands of Salzaar seems to have it all.

Sands of Salzaar may seem pretty straight forward at first - I certainly thought so when I was asked if I’d like to review it - but teeming below the surface was more depth than I was ready for.  Sands starts off much like any RPG type game would: selecting your starting character and class.  There are 12 different classes to choose from, from standard fighters to pure spell casters, all with their own unique abilities.  The game informs you up front that you should choose the Spiritmaster for your first playthrough since it features a good balance of magic and brawn.  During this process you’ll pick some spells, items and bonuses to bring into the world with you by spending Legacy points.  The legacy system is just how it sounds, a system in place to allow subsequent playthroughs to have stronger starts to the game by having more points to spend on powerful abilities and items. 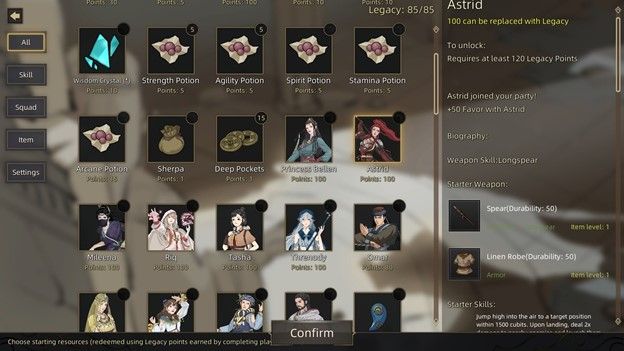 The legacy system allows you to spend legacy points on a variety of things before a new run.

The world in Sands of Salzaar is as close as you can get to a full open world without actually being one.  The various zones are absolutely humongous and interconnected, so while you will have some zoning to do it isn’t something that’s going to happen all that often.  While you adventure in the world you’ll have opportunities to recruit troops to your cause when you go into battle.  At first you’ll have a few minions, so to speak, that take the form of some wolves and villagers but before you know it you’ll be developing quite the collection of followers - from archers and footmen, to spellcasters, snakes and demons.  Each type of companion has its own evolution tree that further specialize their abilities as they, and you, level up. 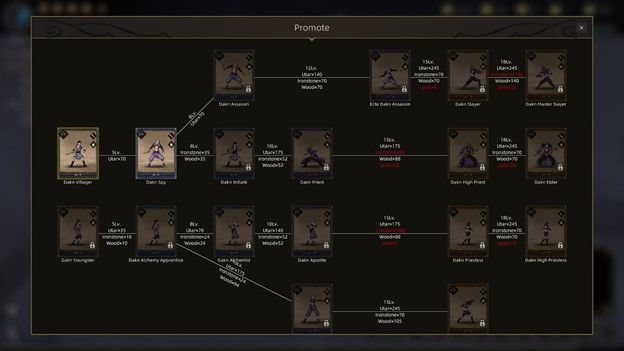 A progression tree for a Dakn Villagers as they level up from battle.

During your exploration of the zones you’ll find yourself in battle quite a few times.  Bandits may try and swindle you from your cash and if you’re not having that you’ll find yourself fighting your way out.  The combat is real time and action oriented, but takes place in a small instanced battlefield.  You’ll bring your rag-tag band of warriors and the enemy will bring theirs in small to large scale battles that can have up to 200 units on the screen at the same time.  In a way this part is similar to an RTS in that your troops and their troops are going to be fighting each other automatically while you weave through the battlefield with your various abilities to turn the fight in your favor.  I found the combat to be challenging, engaging and fun with everything being amplified the bigger the battles became. 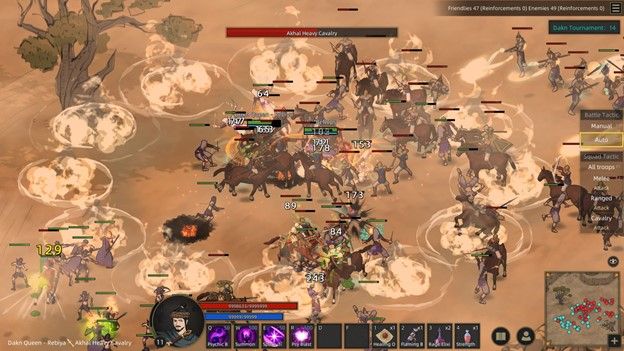 In Sands of Salzaar there is a main, branching questline to make your way through.  It’s very story driven and the English translations are some of the best I’ve seen in a ported game.  I didn’t come across anything that didn’t make sense at any point in my play through and the story of how the Ifrit came into the world translates well to a western audience.  While you could attempt to focus solely on making your way through the questline, I found that exploring the zones and engaging in activities that game me levels was a must - the quests will quickly outpace your abilities, and don’t be surprised if you don’t succeed on your first playthrough - the legacy system is there for a reason - but subsequent playthroughs are far from boring thanks to the choice/consequence nature of the game.

While Sands of Salzaar isn’t a perfect game - the bane of so many in depth systems is a UI learning curve and sometimes poor introduction to mechanics - it’s clearly a labor of love and careful attention to the ‘fun’ factor of game mechanics.  It never felt unbalanced to me.  Challenging, yes, but not unfairly so to the point of frustration.  The game is incredibly fun and engaging to play and has earned a spot of permanent installation on my gaming rig. We'll see how this continues to progress as Early Access moves forward.