Since partnering with publisher gamigo and enacting a name change from the plain old Fractured to Fractured Online at the end of 2021, it has been a pretty busy first half of 2022 for Dynamight Studios, the developers behind the open-world sandbox MMORPG, Fractured Online. There was the Alpha Free Play weekend at the beginning of February, followed by the migration from the internal launcher to gamigo’s Glyph launcher in March. Not slowing down, in the last couple of months Dynamight Studios announced the world map would be growing an additional 40 square kilometers through the addition of a second continent, development progressed from the Alpha state to a 24/7 Closed Beta, and a dynamic weather system was added to the world of Syndesia.

Closed Beta participation is usually limited to those who have purchased Founder’s Pack, but today, Wednesday, May 25th marks the beginning of a week-long Free For All event, giving anyone interested the chance to see for themselves how Fractured Online is shaping up. MMORPG was distributing free beta access keys last week, so I nabbed one and spent some time over the weekend getting a head start on the rest of the horde that would be exploring Fractured Online this week. After a dozen or so hours of experimenting and exploring, I’m ready to share my first impressions of Fractured Online.

I’ll start this off in the same place I started with Fractured Online - the fairly straightforward character creation. You begin by picking a gender and sorting through a few appearance choices. Bodywise, the options available are limited to a handful of face options, haircuts, and beards (for males only). You can also pick from a dozen hair and skin colors, but there aren’t any body size or shape modifiers. For what it’s worth, you do get to round out your initial appearance by choosing your starting underwear color. I know, it’s the little things that can make a big difference.

Next up is picking a background for your character. Currently, there are four choices: the Gladiator, Bowman, Arcanist, and Street Rat. Each choice comes with a set of four abilities tuned to the typical fantasy archetype their names imply. And although your character is also assigned their starting attributes (STR, DEX, INT, CON, PER, CHA) according to their background, you can tweak them as you see fit. Even though first-timers will probably stick with the preassigned attributes, you can see how changes would impact modifiers such as health, accuracy, and attack speed.

Your final duty in character creation is choosing a name. After that, it’s off to the tutorial island. The tutorial will quickly run you through the basics necessary for survival. You’ll learn how to choose and memorize an ability set, and then kill off a few wolves to figure out the basics of combat. You are taught how to gather materials and craft a few primitive pieces of gear, and a raid on a bandit camp will net you your first new ability (or more if you stay and fight for a while). And then, almost as quickly as you started, the tutorial is over and you’re off to the main continents of Syndesia. 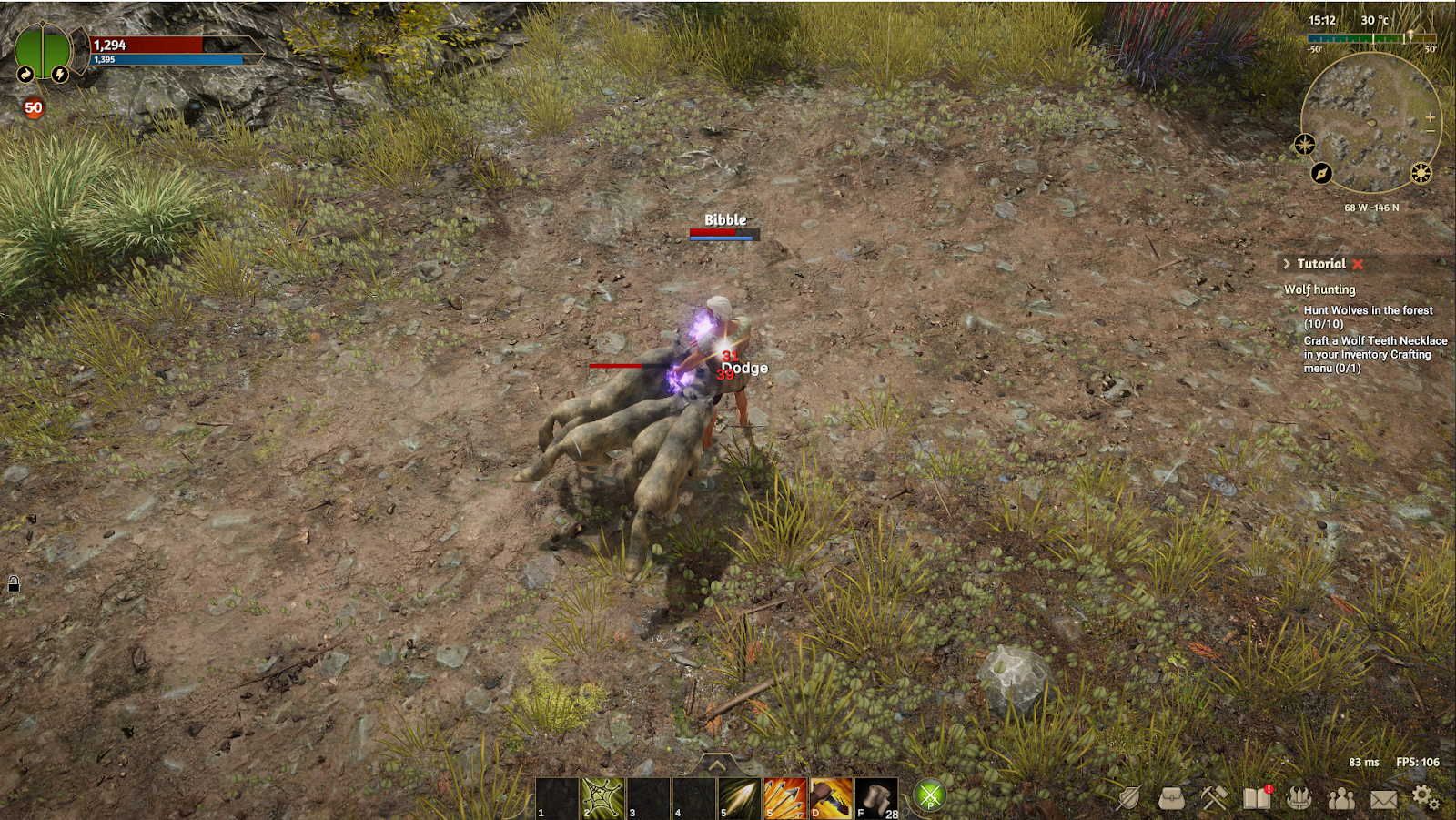 Tutorial combat - 4v1 is no problem at all.

The brevity of the tutorial isn’t a bad thing, though. Like the MMORPGs of old, much of the allure of Fractured Online is discovering the world you inhabit. The tutorial is a quick introduction, leaving the player to learn the rest on their own, at their own pace. There aren’t any NPCs with question marks over their heads or a quest journal to point out which path to follow. You simply start walking in one direction or another, gathering resources and killing enemies as you explore.

You’ll quickly learn that the world of Syndesia (the world available in the Beta Test) is unforgiving, and surviving the first few hours outside of the tutorial can be difficult. Whereas the tutorial is essentially a death-free zone to help you learn the basics, the main continents of Myr and Aerhen can be deadly to new adventurers. You start with nothing more than a couple of weapons, and full-strength enemies replace the docile creatures of the tutorial. The first creatures you encounter - wolves or spiders most likely - don’t just nibble at you as they did in the tutorial. These creatures are going to go toe to toe with you.

If you’re looking for “hardcore” combat, you will like what Fractured Online has in store for you. In the beginning, taking on anything more than a lowly bandit or goblin will end horribly. A single foe is can be enough to down you if you aren't careful, and gaining the attention of more than a single adversary will bring a quick death if you don't flee. The enemies you encounter aren’t just some run-of-the-mill henchman or hungry beast that slowly attacks as you nick away at their hit points. Ok, they do attack slowly, but most enemies can also use a limited set of abilities. And they are abilities that make sense for the creature you’re facing. Wolves have a bite attack that inflicts a bleed effect. Some spiders have a web attack or can poison you. And in my first few hours playing Fractured Online, the only real edge I had was being able to heal myself during a fight. 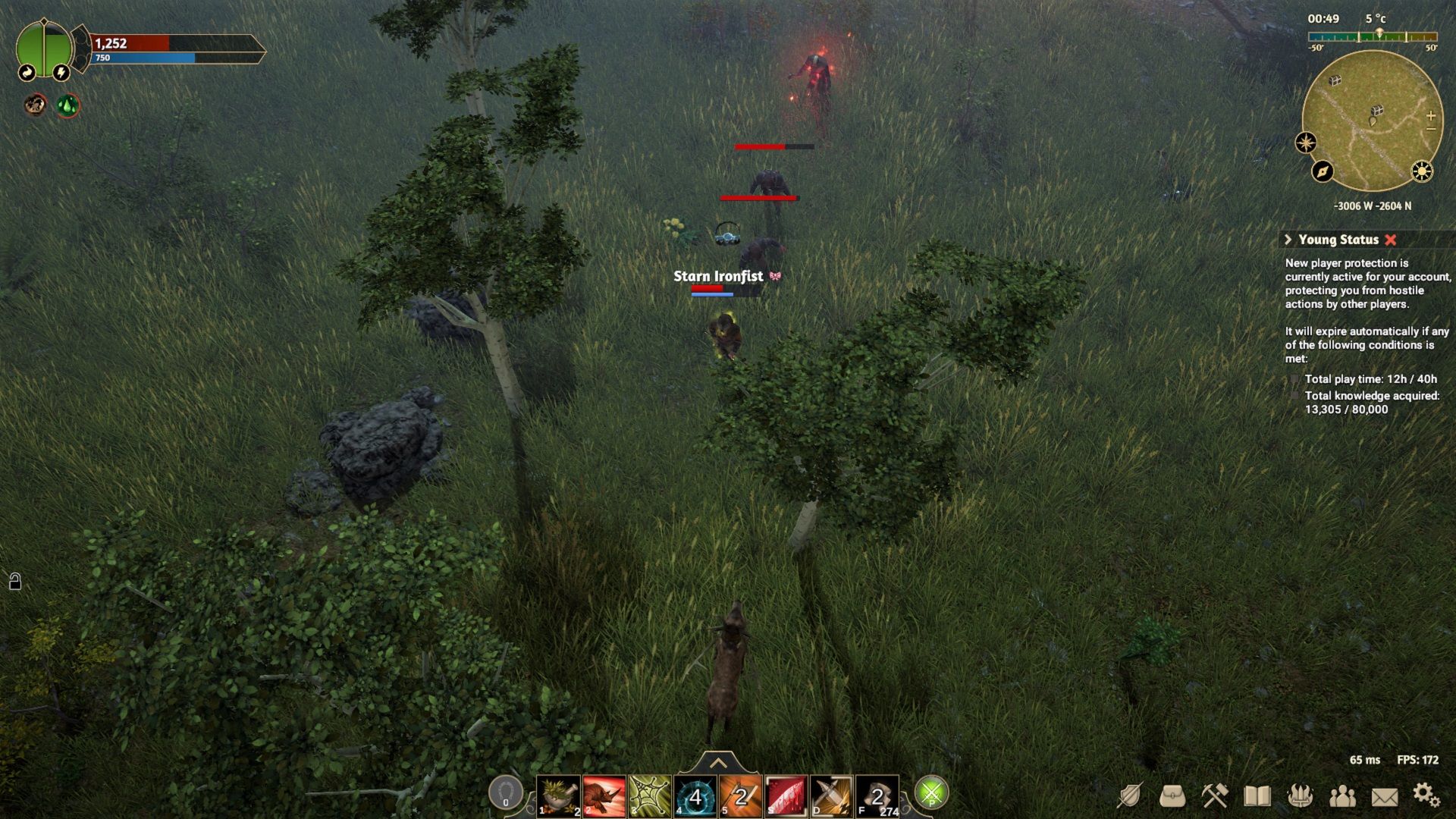 Through that constant fighting, though, I started to rack up Knowledge Points (which are also earned by discovering new resources). There aren’t any character levels in Fractured Online, so the only way to learn an ability is through fighting a creature that already has said ability. By fighting bandit archers, I discovered the Net Trap ability. By taking down wolves, I discovered their Bleeding Strike, and so on. And once I had discovered an ability, I could use the Knowledge Points I had earned to unlock it and add it to my skill set.

Slowly but surely, I began to build up a set of abilities that I could swap in and out of my 8-slot hotbar. Some abilities are only usable with specific weapon types or armor classes, so there’s always a need to find a set of skills that match the weapons you want to wield. On top of that, you have to slot heals, buffs, and debuffs within those 8 slots, so what initially looks like a simple skill system quickly becomes more complex the longer you play. And although you may be able to eventually unlock every ability on a single character, the limited hotbar will keep your power in check. All the more reason to grab a few friends before heading out into the wilderness (more on multiplayer in a bit).

Knowledge Points are also used to purchase Talents, the passive buffs found in FO's version of a skill tree. The circular structure containing the Talents is similar to the skill webs found in Wolcen or Path of Exile and works perfectly for the classless, build it your way character progression of Fractured Online. 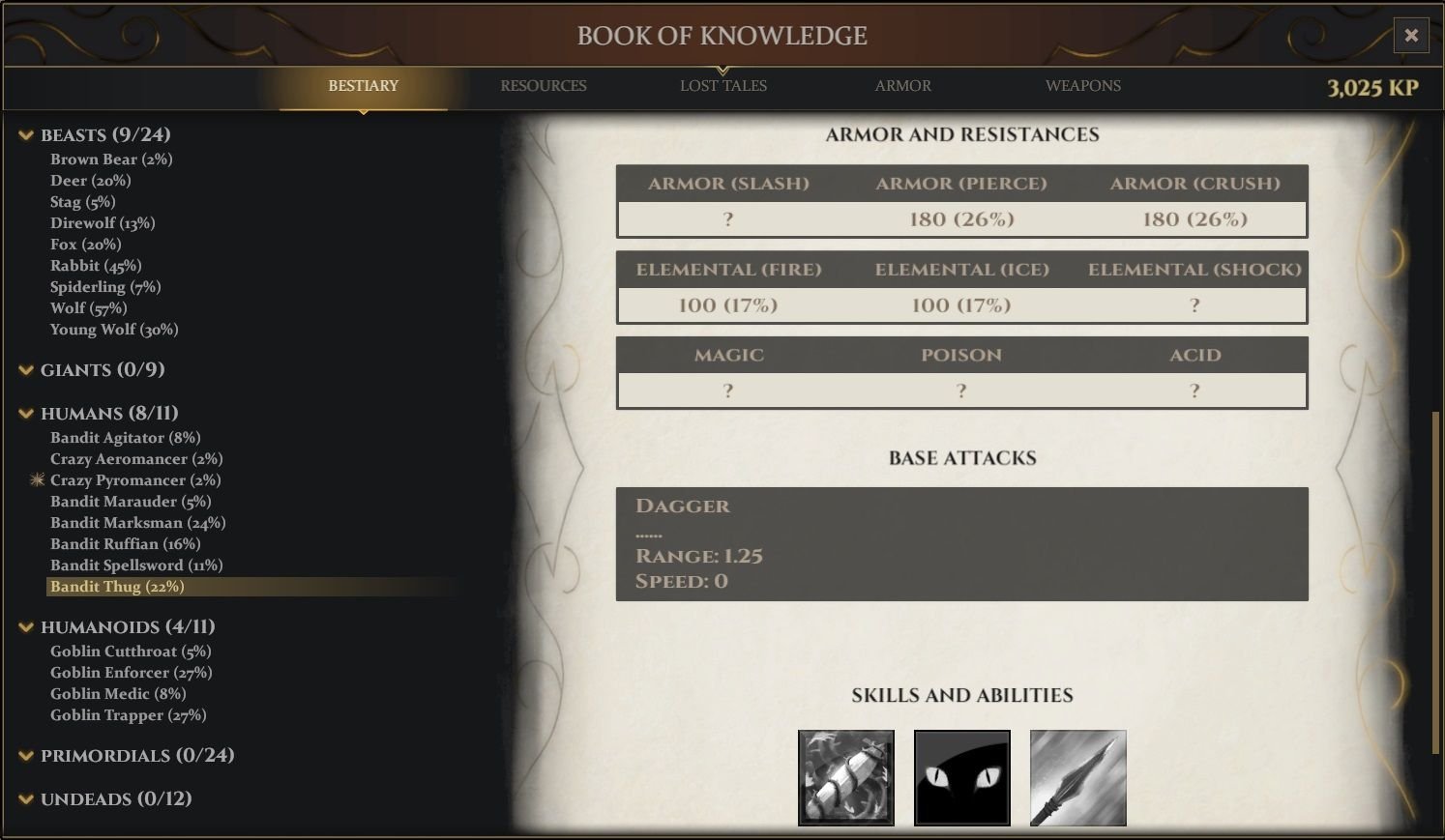 The freedom of choosing any armor and weapon pairs nicely with the ad hoc ability sets and talent tree to create a healthy progression system. I constantly felt as though my character was benefiting from every single fight. Sure, gaining KP can be a bit of a grind; that’s to be expected in an MMO. But the need to hunt for new creatures and humanoids to learn their unique abilities just feels more rewarding than slaying countless monsters to arbitrarily earn a new character level and gain access to the specific skills attached to your new power level.

Along with battling the hostile creatures of Syndesia, you have to pay heed to some typical survival mechanics. You have to gather and eat food to survive. It’s not all that hard; there are plenty of edible plants, and you can scavenge meat from animals you kill. You must also keep track of your energy meter. The energy meter will slowly deplete, and you don’t have any consumables to fill it back up, so you have to build a campfire or return to town to rest and restore your energy.

To be honest, though, the survival aspects are currently underwhelming. Short of the time I got distracted while heading to the fridge for a drink and returned to find my character had starved to death, the survival mechanics aren’t meaningful enough to be more than a minor inconvenience. Even the new weather system that is supposed to adversely affect your character does nothing more than applying a “chilled” or “warm” effect to your character. Your character can’t die from these effects, at least not as far as I could tell. If this is all they have planned, I think it would be better to scrap the whole survival aspect.

Fighting and surviving aren’t the only things I tested out during my time playing FO; I also spent some time dabbling with the crafting system. What I’ve seen so far, I like. As you would expect, repeated crafting of an item increases your proficiency, which in turn allows you to craft higher-quality gear. The materials used to craft also impart specific modifiers to the item being created, allowing players to create gear sets specifically tuned to counter a powerful enemy's special abilities. Gear customization is further achieved through imbuing (aka enchanting), but I, unfortunately, didn’t get a chance to get this far into the mechanics. It’s all been done in other MMOs, for sure. But since all gear in FO is created by the players, it really could pay off to spend the time and resources to craft high-quality gear. 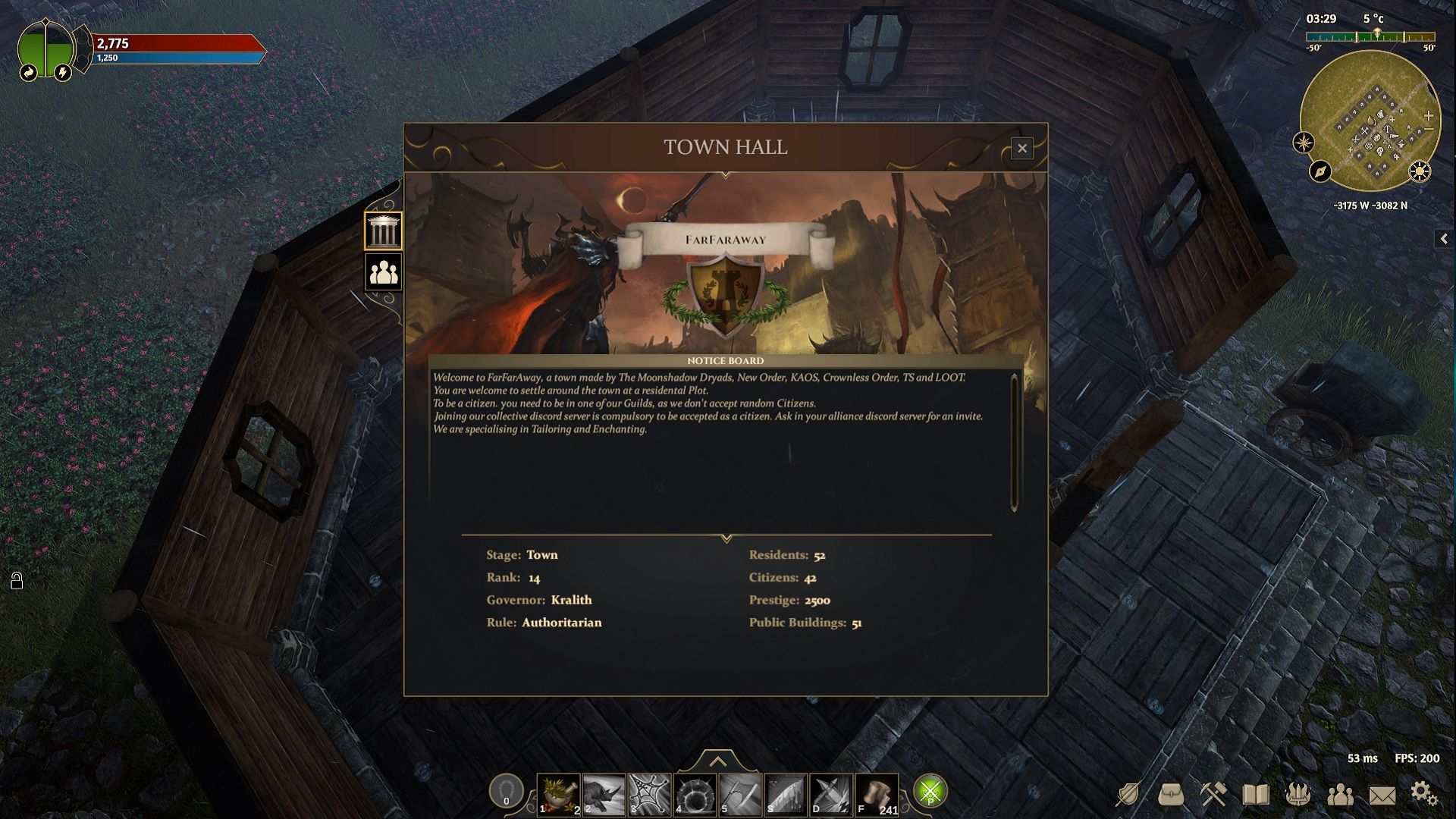 Players truly have an effect on the world of Syndesia. I hope I eventually meet some.

Even within the limited scope of the Beta Test, there’s still a lot of Fractured Online that I haven’t experienced. First and foremost, I haven’t experienced any of the multiplayer aspects of FO. There just haven’t been enough players online while I was playing. The established towns are evidence that there are guilds and players out there, but in the dozen hours I’ve played so far, I’ve only come across a total of three other players. I’ve also seen a handful of names come across global chat as well, but the two continents make up an expansive area for so few players. It is sort of the nature of the beast given the Beta Test requires a Founders Pack to gain access. Hopefully, with the Free For All Week starting up, I’ll finally get to see what a bustling town looks like.

Overall, I enjoyed my limited time with Fractured Online. To be perfectly honest, I wasn’t expecting that to be the case, and there are several things about the current state of the beta client that almost swayed me to the dark side. Things like a fixed camera angle, bugs like non-responsive enemies, and the lack of other players. But after factoring in that this is still a beta test, I can see the potential of the finished product. I’m not quite to the point where I’m personally ready to plop down the cash for a Founders Pack - I’ll need to see the other worlds and their respective character races before getting to that point - but I can recommend the Free For All event to anyone looking for an open-world sandbox MMO that puts player choice above all else.