Although I have never actually played Foxhole, I have followed its progress for my Indie MMO Spotlight column for over a year. Long before I started tracking Foxhole, indie developer Siege Camp had been building out their MMO military sim, taking it from a small-scale battlefield with tens of players on each side to the massive, weeks-long battles currently waged by thousands of players across an enormous battlefield. In advance of the Inferno update and the 1.0 release of Foxhole, I was lucky enough to get a personal preview of the upcoming changes with Mark Ng, co-founder of Seige Camp.

The Inferno update is the 10th major update in the five-year development of Foxhole. The name hints at what new toys players will get. The Entrenched update added trenches; before that, Winter Army added a dynamic weather system. When the Inferno update lands today, you will be playing with fire.

In its most literal sense, players will bring fire to the battlefield with new incendiary weapons. In its simplest form, foot infantry can strap fuel to their back and swap their rifles for flamethrowers. Like their real-world inspiration, flamethrowers can make quick work of a group of enemy soldiers. Their minimal range offsets their literal firepower, so they are just another option instead of a be-all-end-all weapon.

Vehicles, including armored cars and tanks, will also be getting the fire treatment. The added armor and range these vehicles will bring to the front lines will make them deadly weapons against ground troops. Yet, the rock, paper, scissors nature of warfare means the enemy will be bringing countermeasures to stop flame vehicles in their tracks.

The last major Inferno weapon is the addition of the incendiary rocket launcher. These vehicles can rapidly unleash a large volley of rockets, pelting the target area with death and destruction. This incredible fireworks display is balanced by a lack of accuracy provided by other ranged artillery. Reloading a full rack of rockets is a slow and manpower-intensive process as well, making its use similar to the ultimate class powers found in other MMOs. 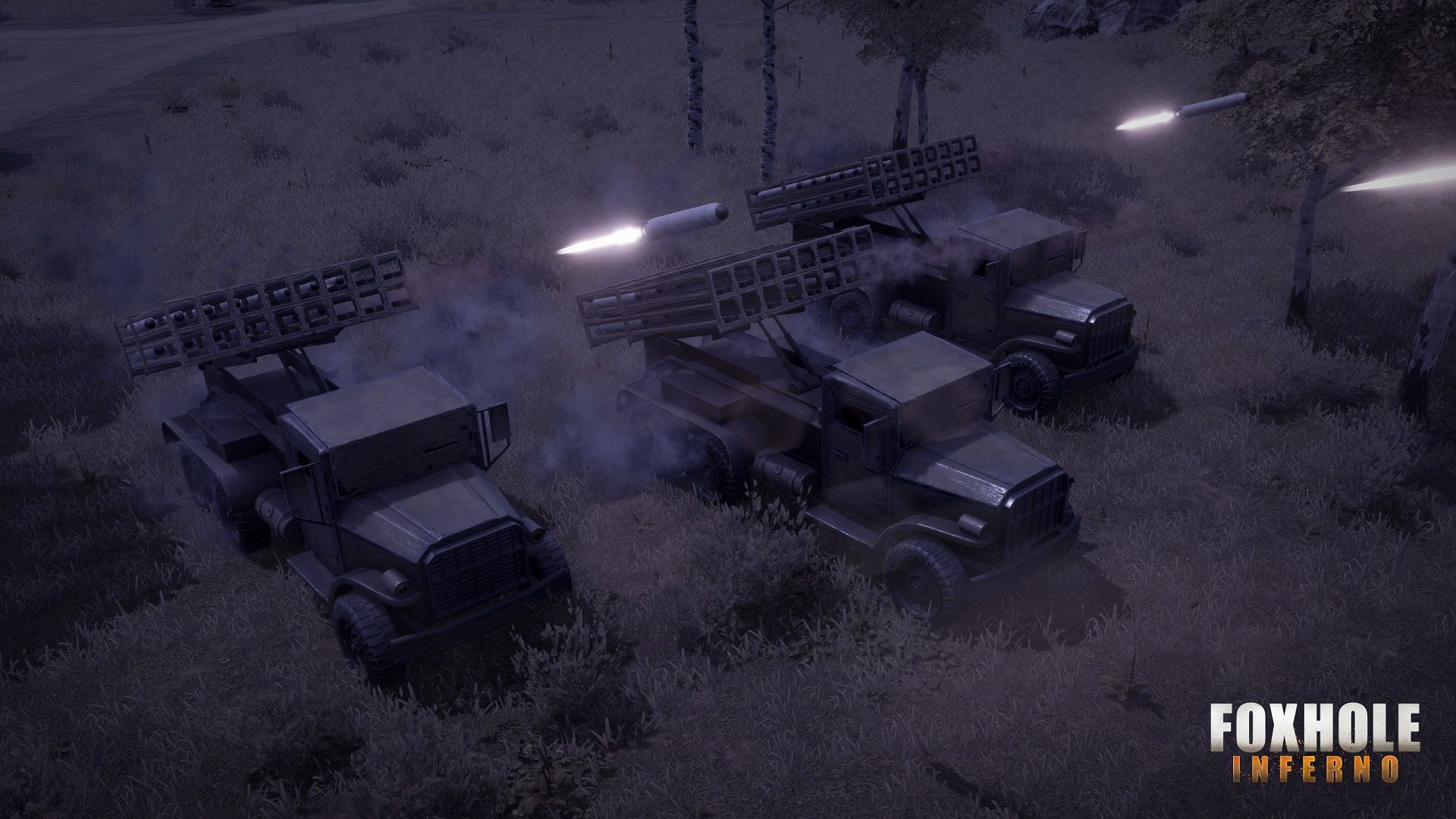 Naming this update Inferno is definitely an attention-getter, and it’s probably true that every foot soldier in Foxhole is chomping at the bit to bring the newest weapons to the front lines. However, the real game-changers of the Inferno update are the gameplay mechanics for the logistics side of Foxhole. Logistics work has been a necessary but thankless job carried out by the true heroes of Foxhole. Every bullet, rifle, and tank (and everything else) used on the front lines must first be made and delivered by a Logi.

Although many players dedicate themselves to the Logi role, the developers realize the whole production system can get a little mundane over the course of a war. While tech levels increase throughout the war, the actual production of weapons and equipment doesn’t change. Regardless of whether you are creating ammunition or a tank, after gathering and refining the base resources, you feed the materials into a factory, pick the item you want from a menu, and then wait for it to be assembled. You then load it onto a truck or ship and move it to the front lines for use in combat.

In the past, all of the production facilities had static placements on the map. Now, with the Inferno Update, along with the static logistics towns, players will be able to create their own production facilities anywhere on the map. Similar to logistical games like Factorio and Satisfactory, building your own facility in Foxhole adds a new level of progression. At the beginning of a war, Logistical players must manually fuel and power their budding facilities. As their facilities grow, much of the production will become automated, leaving the players to manage supply and power usage.

Along with the increased scale in production from player facilities comes an increased need for transportation. To this end, the last major piece of the Inferno update is the addition of a rail system. To aid in resource gathering, players will be able to build an intricate mine cart system to feed resources to their facilities and a train network to feed massive amounts of supplies to the front lines. 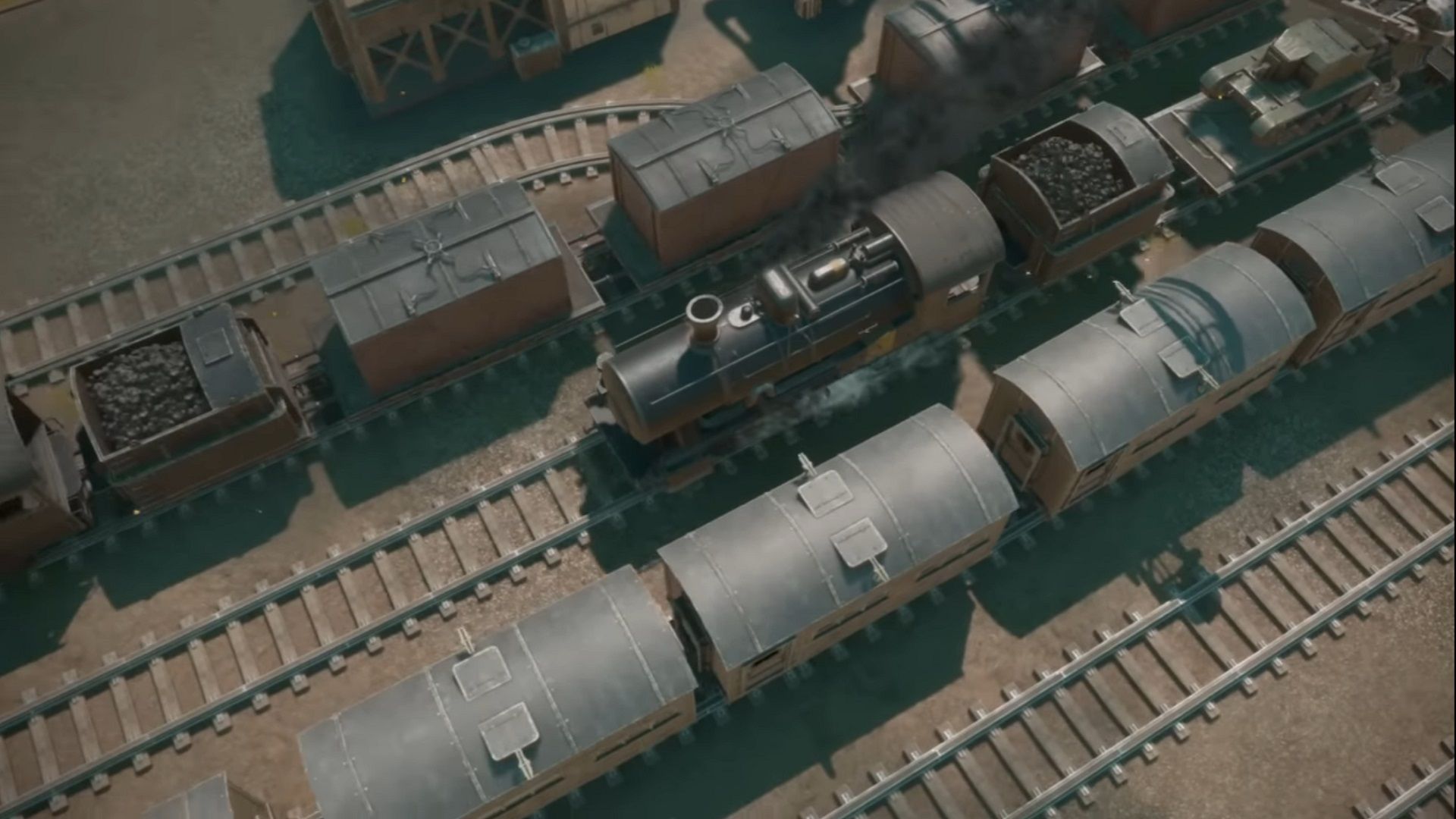 The primary focus of adding player facilities may be giving logistical players a progression path, but it also adds new layers to the overall war effort. Players wanting to hinder enemy production will now have to scout for the location of player-made facilities. At the same time, each player-made facility will require additional defensive placements to be built to defend against attacks. Ultimately, Siege Camp has just added more sand to the sandbox, giving players even more control over the logistical side of the war.

No matter how you cut it, the Inferno update has something to offer every player, no matter their preferred role. And with Foxhole leaving Early Access, there’s no better time for a new recruit to sign up and join the fight. I know I will be, so you can expect a full review of the 1.0 release in the coming weeks. For anyone else ready to enlist, Foxhole is available on Steam for $29.99.