As I'm bashing my axe against this enemy's face, the adrenaline of combat races through me. I want to take this monster out and make the already brutal world of Dying Light 2: Stay Human a safer place. There are others like the one in front of me to deal with, but as long as I concentrate and don't get overwhelmed, I should be victorious.

Oh, did I mention these are other survivors of this Infected-infested city?

I recently flew to San Francisco to play a four-hour demo of the upcoming Dying Light 2: Stay Human, a demo I couldn't see to completion thanks to its dense and branching content. All the while I was learning more about the dangerous world and what we will be doing within it.. While I expected to come in and bash some ghoulish brains out--and I did!--the real intrigue and more importantly danger of this world is not from the monsters outside, it's the ones within. Managing the living will be much more precarious than dealing with the dead.

First, a quick anecdote: I sat down at my station to play the demo, began traversing the world and making my way to the first marker, and right after I got there my station lost power. Apparently the mega ultra powerful PCs the dev team loaded with our demo builds were tripping wires in the building we were playing in, so about six of the demo stations were suddenly lights out. After a few minutes power was restored and we were off again, only for the power failure to happen again right around the same part of the demo. After a second power restoration, my demo was clean for the remainder of my time.

So why do I bring this up? Strangely, the technical issues of the real world were able to spotlight the vast openness of Dying Light 2's in-game world. Thanks to the power outages I had to make my way to the same quest marker three different times, but as I watched the footage of my demo I realized I had reached that marker via a different path every time. The first time I came from the west, having been distracted by a Military Convoy marker promising good loot and gear. The second time I came from the south, encountering both a hostile group of bandits and a weary survivor singing a beautiful song on a rooftop near the marker. The final time I stayed on the rooftops and made a beeline for the marker, as I was now worried about not being able to finish the demo.

Each of these paths brought me to unique situations, coupled with their own enemies and challenges. No two playthroughs of this demo -  let alone the full Dying Light 2 experience - will be the same. A more direct route may be safer, but I also might miss out on some extra loot or gear that a bandit or a convoy may hold. Later on in the demo I encountered a "GRE Anomaly," a hideous beast that only appears at night but, when defeated, offers upgrade materials and great loot. I might not have seen that if I didn't go explore it, making every trek out into the Infected-infested streets a gamble. 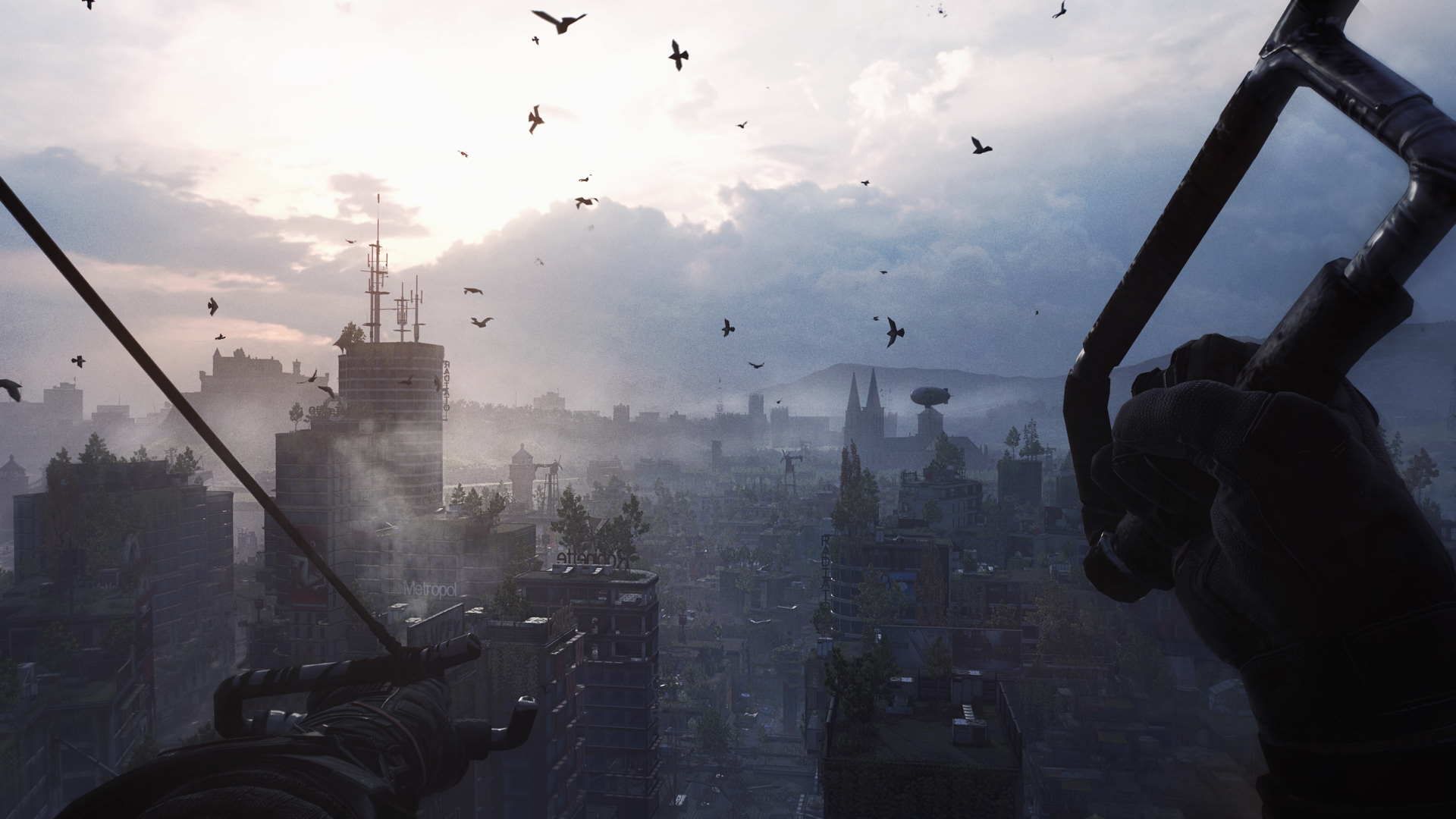 That brings me to another interesting dynamic about this world: the dangers you encounter are often linked to how directly you play the main story. For a while I stuck to the linear path, going from marker to marker and completing missions. While I did encounter some uglies during those tasks, the main source of danger came from other survivors. The infected were background characters, an ever-present issue that also never really reared its ugly head. The times that it did though, ho boy, were there some ghastly monstrosities out to get me.

One of these encounters involved the Goon, a massive bloke with an arm that doubled as a bludgeoning tool. The objective was to search multiple spots in a confined space for a certain item, however every time I searched an objective I'd be leaving myself open to a Goon attack. Therefore, I had to lure the Goon and his other infected buddies away from the spots I had to check, then run over and check them before he caught up and slammed my head through my backside. This highlights a variety in mission structure that I hope continues throughout the Dying Light 2 story, offering something different in the midst of "go here, talk to this person, fight this enemy, repeat" sort of storytelling.

I hope the mission structure keeps me interested, mostly because I want to learn everything I can about this game's story arc. The small tidbits we were fed in this demo are intriguing, as are the people we meet and choices we have to make. Not every choice has a major impact--some characters aren't meant to live, for example--but sometimes choosing one faction over another can have a huge impact on character relationships, the world itself, and more. 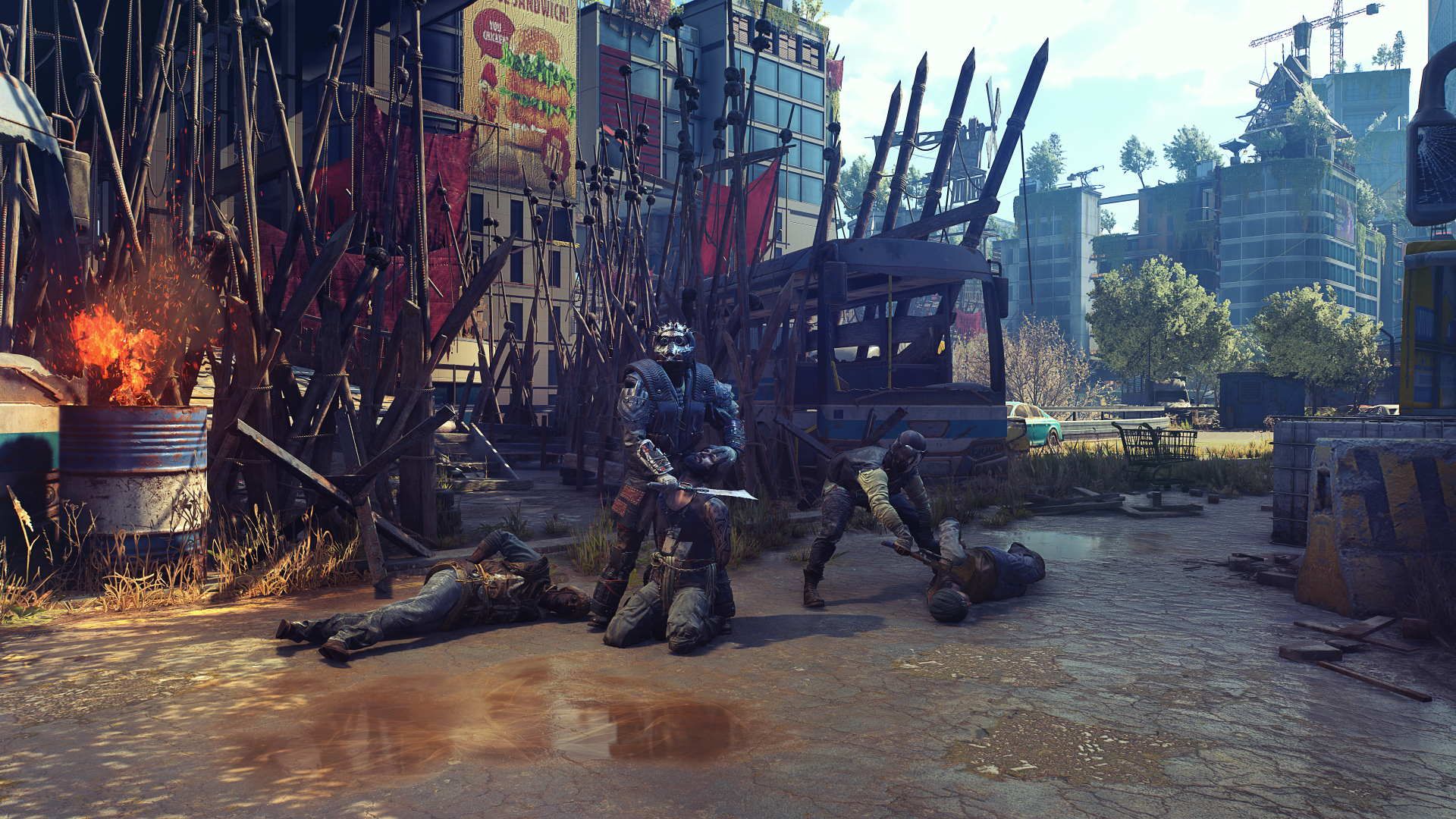 For example, in one mission I am meant to liberate a water tower that still produces clean water. When I do so I've given a choice between two rival factions to whom control of the water tower should be granted. If I choose one side, the area around the water tower will have more landmarks suited for parkour like ziplines. If I choose the other, the area will be more fortified for combat thanks to things like car bombs. The choices are mine alone, and I would like to see how deep these choices can go in their effects on the overall world.

While I do want that varied mission structure and that amazing story, I will point out that the parkour and fighting mechanics of Dying Light 2 are vastly improved from the previous game. The parkour is especially better, allowing me to perform some impressive athletic feats as I travel across rooftops, cars, and more. The stamina is still here, though it took a good while to deplete even at the low levels in this build. The more I upgrade it, the better it will get. There are a few points where the parkour controls can be a little confusing--I'm looking at you, windmill platforming puzzles--but as a whole getting around the city is, in the end, a breeze. I especially like the ability to roll through a long fall and take less fall damage, as I've discovered I tend to jump off of high buildings a lot.

Thankfully, Dying Light 2 expects I won't be alone in those long jumps, and provides a nifty little tool in the paraglider. Deploying this allows me to softly glide to the ground without taking any fall damage, or cross long distances by flying into air vents. Yes, it does work a lot like the paraglider from a certain "wild" adventure, but that's the whole point. The paraglider works in this world, and the first use makes that abundantly clear. I hope there's more of that too in the final product. 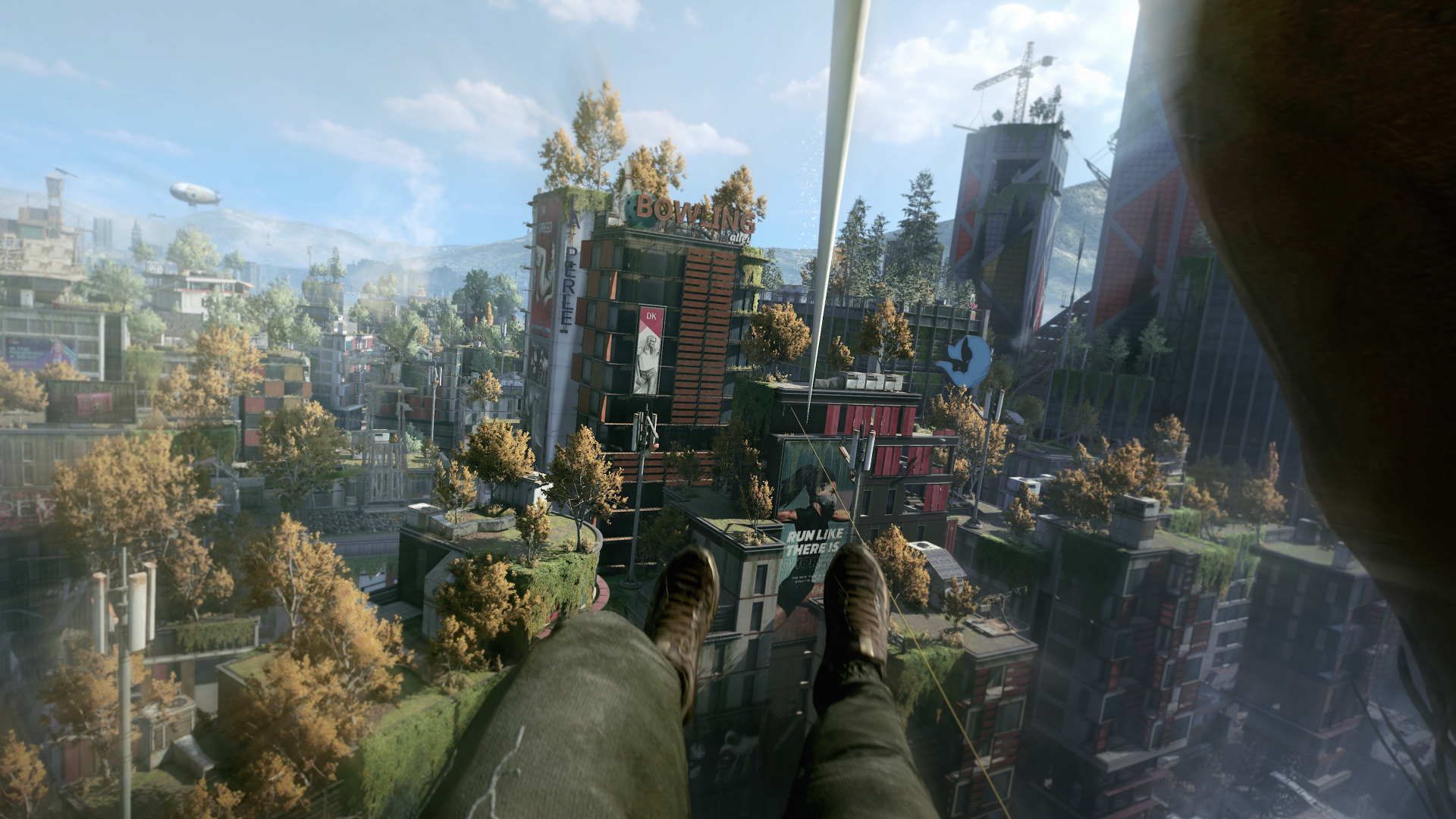 Combat is gritty and powerful, each attack having weight and impact to it. Melee weapons are the bread and butter of the Dying Light world, and I had no shortage of pipes, knives, hammers, and an axe where the blade was half of a "No Parking" road sign. That said, the ranged weapons were also impressive, and I found myself using a bow and arrow more than any other weapon in the demo.

Also, being able to stealth my way up to a group of enemies with a few choice headshots was damn fun. In fact, probably the most fun of the entire demo, and I hope there are more slow-paced moments that I can use the bow to my advantage.

Dying Light 2: Stay Human impressed me in the four hours I saw of it, both in its massive world filled with things to do and the mechanics involved with surviving in said world. Fighting enemies is bloody fun, parkouring around the city never gets old, and the choices I have to make will definitely keep me interested to see where things end up. We've got some time to wait unfortunately, as it launches February 4 on PC, PlayStation 4, PlayStation 5, Xbox One, Xbox Series X|S, and Nintendo Switch's Cloud Gaming capabilities, but I'm ready to try and Stay Human inside the world of Dying Light 2.

Full Disclosure: Travel was provided by the developer for this preview. No request was made, nor any given, to influence the editorial direction or content of coverage.