For many older gamers out there, System Shock adorns the shelf with some of our most hallowed gaming experiences. The immersive sim genre saw its inception with this title, and the team at Nightdive are aiming to bring it to a new audience, with some modern quality of life touches.

I'll admit: it's been a minute since I've played System Shock. I remember getting lost in the original as a kid, cautiously picking my way through the world as SHODAN, the rogue AI at the heart of everything, was keen to see my journey end. I'm happy that Nightdive's System Shock remake fully gives off that feeling of just not knowing what's around each corner.

In my demo at PAX West in Seattle earlier this month, Larry Kuperman of Nightdive Studios led me through the early moments of my demo, explaining that while it's a faithful recreation of System Shock, there are some modern twists. The most notable are the visuals: a mix os fully 3D models, 90s-era textures with a layer of pixelation that really pops and put me back in my old house's den, huddled over my CRT monitor. You would think that adding a layer of pixelation to the textures would mean that it looked blurry, but no - everything on screen popped with a clarity I'd expect from a modern title. It looks incredible, helped as well by the outrageously good atmosphere that helps set the stage for the sim.

It starts off with an interesting angle: a drone searching for the player character through a cyberpunk city. You play a hacker who is tasked with toning down the ethical constraints placed on the station's AI, SHODAN. However, everyone who has seen this plot play out before in countless science fiction tales will know that it simply doesn't go as planned, and as you awake after a forced medical procedure, you realize that something has gone terribly wrong.

Picking my way through the station's corridors, killer robots would lurk around any corner, System Shock doesn't hold your hand, much like its predecessor, meaning it's up to you as the player to truly figure out how to escape and learn what happened here.

It's refreshing too, as so many modern games, MMOs, RPGs, even first person shooter, simply hold your hand through the experience. System Shock doesn't add anything to the, admittedly, really great UI to point you in the direction you need to go. Rather, you as the player learn how to overcome puzzles, obstacles and more through simple trial and error. 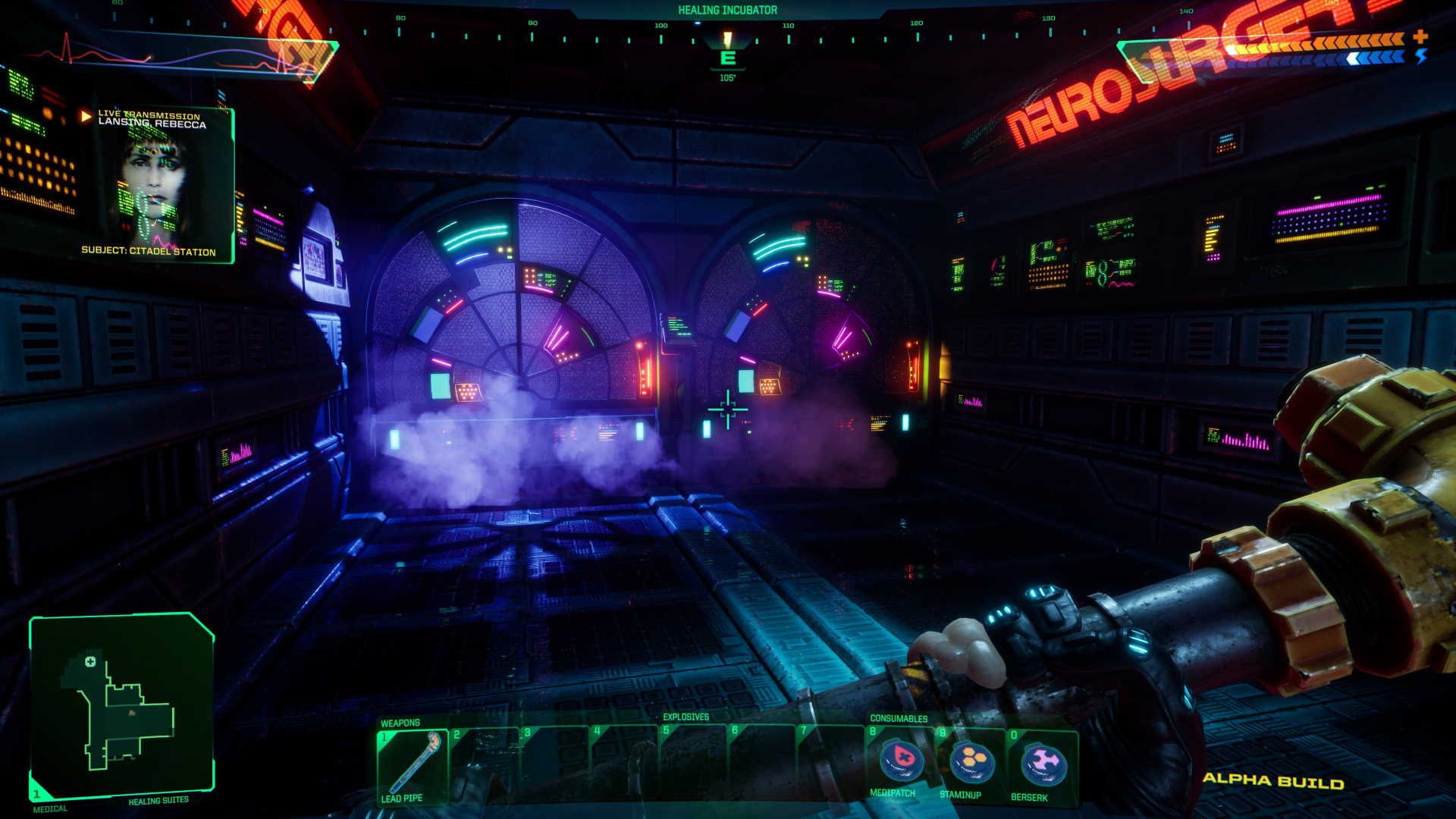 It was something that Kuperman pointed out to me after my demo finished: players who were trying out System Shock at the PAX booth were dying constantly. Rather than giving up or getting frustrated, they were diving back in, eager to learn from those mistakes and overcome the part that defeated them before.

I slinked my way through the ship, trying to find ammo for the only gun I'd come upon, I realized that one play through in the demo was not going to be enough. I needed more time, more chances to figure out what to do and how to do it. It's been a while since a game has challenged me like that, and it was incredibly refreshing. Finding a gun, but not any extra ammo made me warier of how I used it - especially as corrupted humans started joining the ranks of those killer robots. Dealing with SHODAN's cameras while also trying to not draw attention to myself presented further challenges, especially when all I'm equipped with is a lead pipe to begin with.

It was a flashback to games like Theif, another immersive sim from yesteryear I sunk way too much time into as a kid. Sticking to the shadows in that game, learning the path of enemies, conserving ammo, and forging my own way to my goal was such an exhilarating and rewarding experience. System Shock helped to create this entire genre of games that still live on today, most recently in big-budget games such as Deus Ex, Bioshock and others. System Shock's remake really nails that experience, while making it also feel modern at the same time.

I died rather quickly, succumbing to a killer robot that chased me down a corridor. I panicked, unloading the last of my ammo on the thing before it got to me. But I left my demo wanting more. I wanted to figure out where I went wrong, how to fix it, and which other paths I could take. I left thinking about all the things that the original System Shock filled my brain with when I  would go to school the next day, thinking of outwitting SHODAN instead of learning maths.

While there's no release date set for the remake itself, developer Nightdive Studios has a faithful recreation of one of the most influential games of our lifetime in the works, and it's going to be interesting to see what the reception is with gamers who may not have grown up playing it for themselves. Thankfully, there won't be any shortage of ways to play, as System Shock will be releasing on PC, PlayStation, MacOS, Linux, and Xbox.