One of my favorite games growing up was Final Fantasy Tactics. I didn't play the PlayStation version at first, instead playing the Game Boy Advanced port, but I would spend hours moving my units around the battlefield, trying to figure out the best class combinations, spacing, positioning and more. I loved romping through Ivalice, but as the genre has matured, it's been largely hit or miss as to whether a game can replicate those dopamine hits.

The Banner Saga series comes really close, and from a story standpoint it's one of my favorite game series of all time. While the tactical combat in Banner Saga was compelling, it always felt constrained a bit with the flat battle grounds and limited maneuverability.

Thankfully, Arcadian Atlas in its PAX West demo shows that its attempting to bring back the variety of battle maps, terrain and verticality of Tactics itself.

The RPG takes place in the world of Arcadia, seeing players jump into a realm full of political and familial strife. The nation is tearing itself apart, as players will need to navigate treacherous plots, intrigue, and more to survive.

One of the most notable aspects of the demo was the music. As someone who grew up playing Saxophone, playing in jazz bands and big bands, it was really awesome to hear such an eclectic mix of jazz during the cutscenes and even in the battles themselves. If nothing else, the soundtrack of Arcadian Atlas looks to be a highlight all its own.

In our demo, the RPG sees the party led by two Warmancers Vashti and Desmond, the duo having plenty of comedic moments between them. They lead the party through a forest to what looks to be a ruin, which sees a wizard stumble out of it, chased by what look to be barbarians.

Jumping into battle, one thing I noted was that while there were "mages" in the form of Apothecaries, they wielded potions and salves to deal damage or heal, rather than actual magic. Turns out, magic itself seems forbidden in Arcadia, though the demo doesn't really elaborate on why. It's here we meet Poncho, an anthropomorphic raccoon who joins the party wielding what looks to be an ordinary kitchen knife to devastating effect. 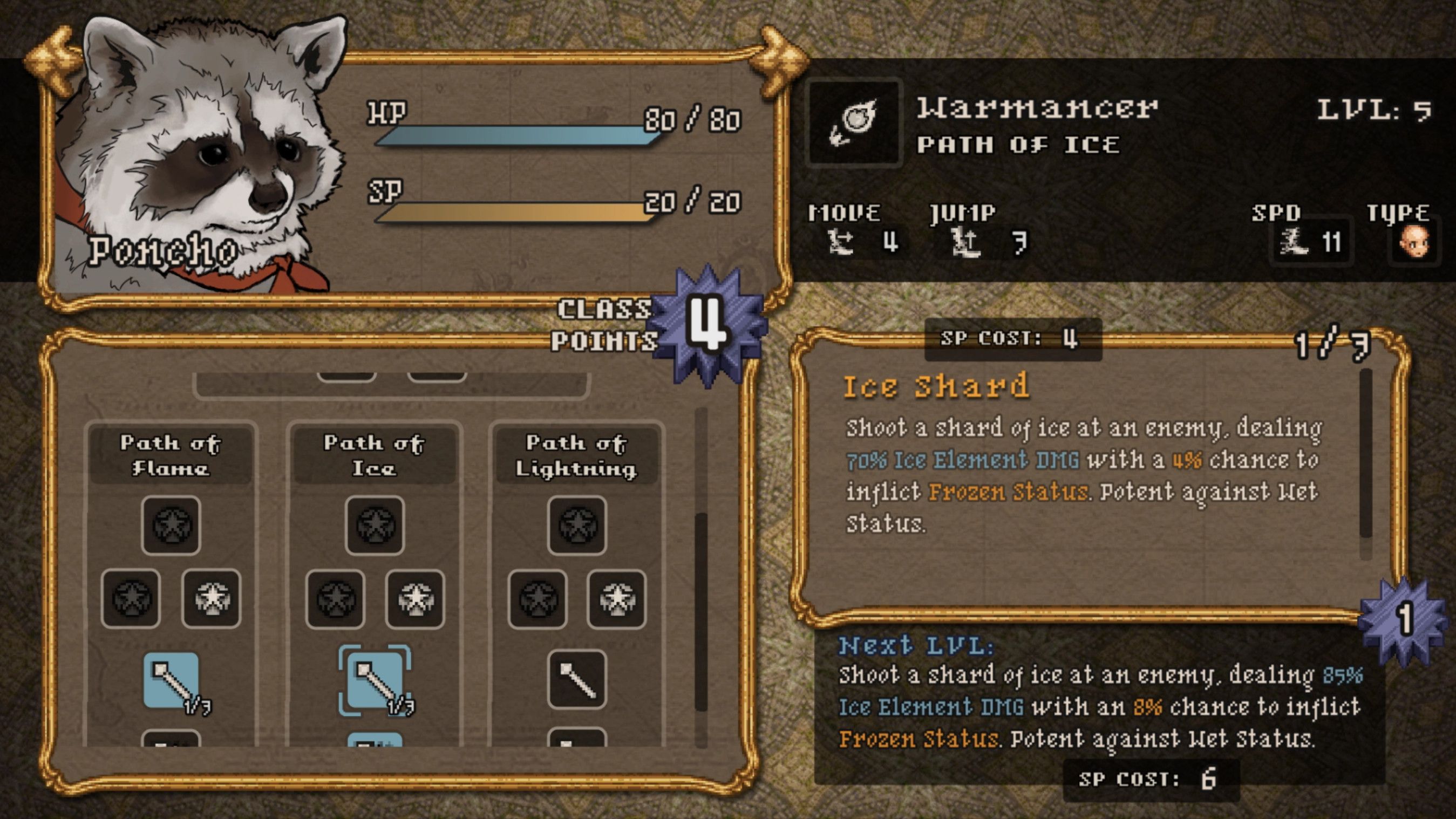 Arcadian Atlas battles themselves take place on a tile grid, but terrain and obstacles make maneuvering this battlefield a bit more thought-provoking than just a flat plane. This was fully on display in the second battle of the demo, which takes place in a medieval city. Ambushed by a part of knights and vagabonds, I had to overcome archers, apothecaries and powerful Warmancers, all while trying to move my units into position to better take advantage of the terrain around me.

While there didn't seem to be too much difference at first glance between the bevy of characters I was given in the demo, it became clear that there are further customizations you can make beyond just the base class. Some of the Apothocaries I used were melee and excelled at healing, while others were ranged and were more AOE damage dealers than others. Archers can wield either crossbow or longbow, each with their own strength and weaknesses. Vashti, one of the knightly Warmancers, handled differently than her counterpart Desmond. Poncho, the knife-wielding Raccoon, was altogether different even though he was also classified as a Warmancer. I wish I had been able to really dive into the class customization during my time in the demo, but there looks to be some deep customization here, at least one the surface. We'll know more when the game releases, however. 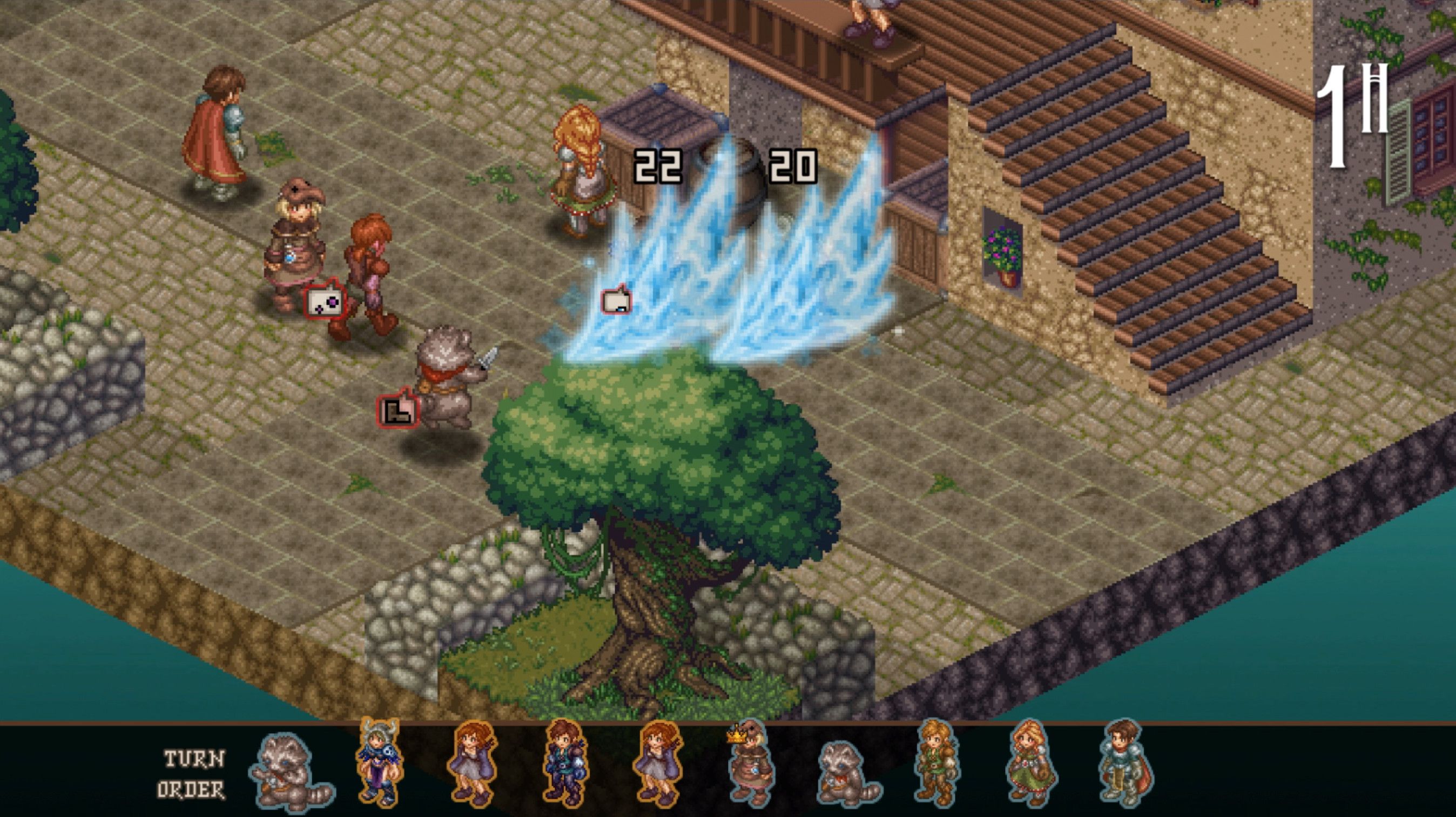 Combat itself plays out like you'd expect in a Tactics-inspired RPG, with some twists. Characters don't immediately die if they are knocked out, rather there is a chance to save them if you're able to revive or win the combat within three turns of the character going down. This is meant to give those players who may not want the hardcore nature of some tactics RPGs, but still want the challenge of death meaning something.

Additionally, some actions don't just fire off on your turn, such as some spells or arrow attacks. Pass actions play a huge role in Arcadian Atlas, and it forced me to have to choose whether I wanted to attack the enemy itself, or target a square where they could go in the off chance they moved while the action was charging up to fire off.

I was able to secure victory in each of my battles, but it wasn't easy. Many of my fighters went down (including Poncho!), and while the three-turn death timer is nice to have, I more often than not saw my characters vanish from existence. It does make me wonder how forgiving this will be, and how liberal the RPG will be with giving new NPCs to replenish the losses. Given that your choices will affect some of the story beats in the 20-30-hour campaign, it also makes me wonder just how different the RPG will be if a major character goes down as well.

All told, though, Arcadian Atlas is definitely one to keep on your radar. A faithful homage to Final Fantasy Tactics, from gameplay to visual style, it's definitely evoking memories from gaming's yesteryear. You can check out the game's page on Steam to wishlist to keep up with development heading towards its 2023 release.