Outriders is a game that caught me completely by surprise. Just when I thought Square Enix were completely out of original ideas, People Can Fly showed up and delivered one of the coolest third person shooters I’ve seen in quite some time. Outriders is a game that feels like it was made by gamers for gamers, but we’ll talk about that more in a little bit. For now, I’m gonna get you up to speed with everything I know about what I saw.

Outriders starts off on Earth, where war has ravaged the planet to an uninhabitable state. Two ships of survivors are cryogenically frozen, and one ship obviously doesn’t make it - but thankfully, you were on the right ship. Your Outrider is awakened on the planet of Enoch, an undisturbed utopia of lush wilderness and big ass creatures - one in particular that looks a lot like a Behemoth from Final Fantasy. Speaking of Final Fantasy, I noticed that in typical Square Enix fashion, the characters in Outriders sure did have a lot of belts/belt buckles on their gear.

Characters can be created from a fairly generic set of choices. There are typical male and female choices, with different hairstyles, scars/markings, makeups,  and skin tones - all fairly par for the course in character creation tools, but everything is definitely standard human. There’s nothing cybernetic or alien to choose from. Your Outrider doesn’t ever appear to be named in the game - just referenced by all non-gender based terms (Outrider, Chief, Boss, etc).

While the non-identifying terminology might cater to certain people, I’ve argued in other places that I dislike how Ubisoft has made this fairly common in both FarCry and The Division, as I feel like not calling the main character by name or gender-based he/she terms takes away from the immersion. Yay for personal preferences, but kudos for Outriders trying to make everyone feel included. The only other issue I ran into was that NPC characters would often call out character names and it seemed as if they were talking to the player, but it ultimately wound up they were speaking to the person near you. I figured this out later once I had access to the database to see more about the characters, as I had written down several names that I thought may have been attributed to the main character only to find out I was dead wrong. I’m sure this will be refined by the time the game is released.

After creating a character, Outriders drops you into the new world where you see how little regard humanity has for their new surroundings. Land rovers trample trees and disrupt habitats of animals, while you’re exploring new places to set up camps. As an Outrider, you’re following the orders of a government agency known as the ECA and you’re taking orders from a Sgt. Major named Maxwell, who is such an obvious dickhead that I found myself completely unsurprised when he became the boss you fight near the end of the section. The troop embarks out on an adventure and they stumble across some black goo that makes a guy sick. The demo stays pretty mysterious, though I felt like the goo leads to either a corruption due to exposure or a sickness that results in mind control. 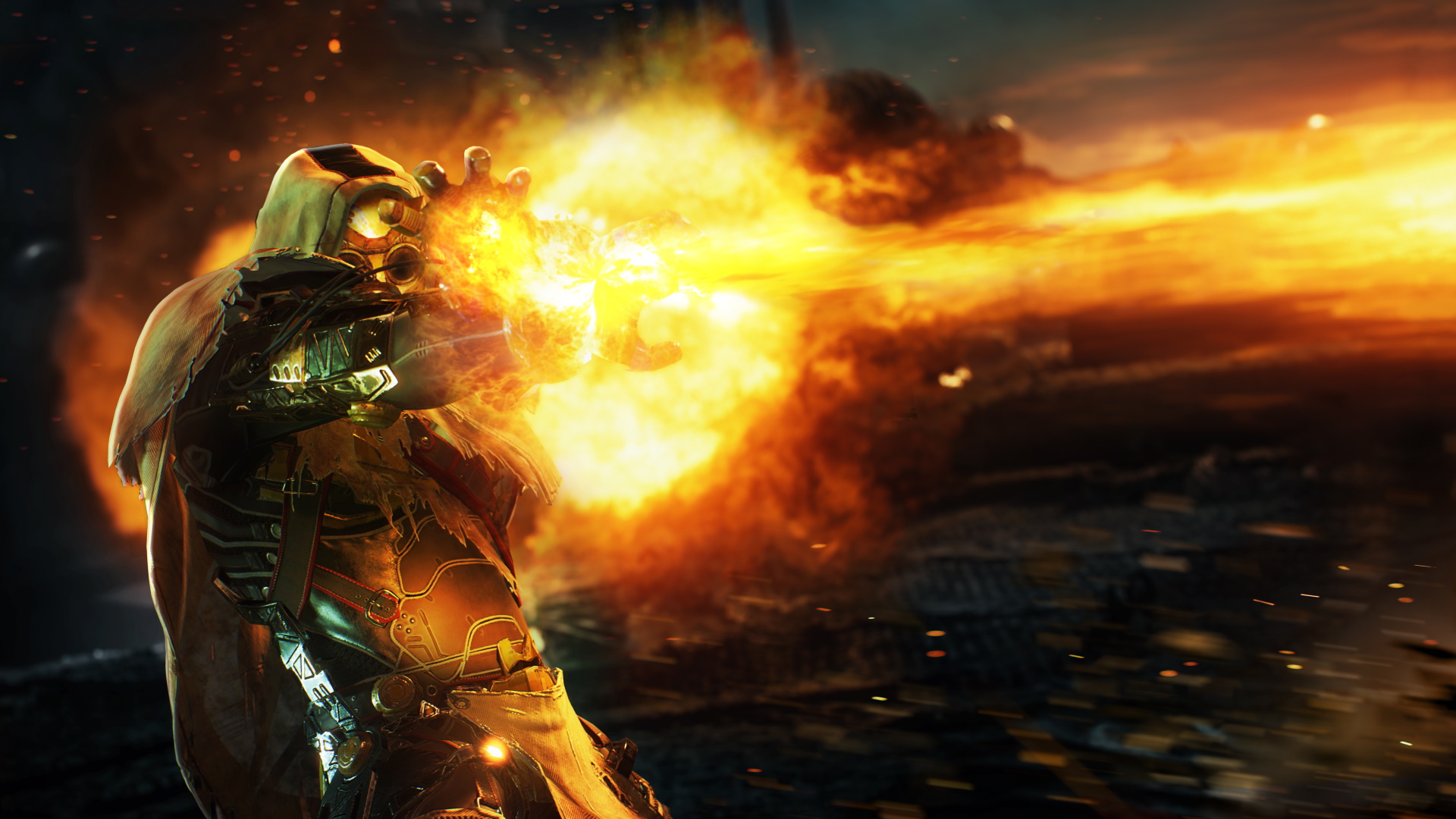 As I pondered what to think about the goo, Maxwell decided to kill the main character’s mentor and leaves a bunch of sick people to die. On top of all this, an alien storm suddenly hit, which was incredibly visually impressive - rivaling Gears 5’s E3 trailer from a few years ago that had everyone talking. Lightning strikes, crazy wind and rain effects, and your Outrider gets hit by a laser beam that prompts a vision of what could perceived in several different ways. Was this a vision of the past, or what might possibly come in the future? Are these your memories or those of someone else? The story was super compelling and I’m honestly more excited to see what happens as this story unfolds even in spite of how good the gameplay was. From speaking with the main narrative writer, he suggested that Outriders has a main story that’s about 30-40 hours, so I’m super excited to spend more time in this world.

After the fight with Maxwell, your Outrider is basically killed and then revived 31 years later and that’s where the game really starts. You’re revived and they explain that the world is in yet another unending war, and then you’re captured, and you go for a Skyrim-style cart ride. Damn you, Todd Howard! As you ride, you realize that this once beautiful utopia is now another war-torn hell hole like the Earth you fled from 80 years prior had been, reminding us all that humanity is a plague upon planets. Once you regain control, you get to choose your class, and that’s when Outriders starts to show you what it actually is. There are three classes, and you’ll notice an immediate comparison to Destiny, despite the game playing like Gears of War. The classes were Pyromancer - a medium ranged class that can summon elementals and fire spells (Warlock), Trickster - a melee ranged fighter with time bending abilities and stealth strengths (Hunter), and a Devastator - which is, as you’d guess, a tank (Titan). 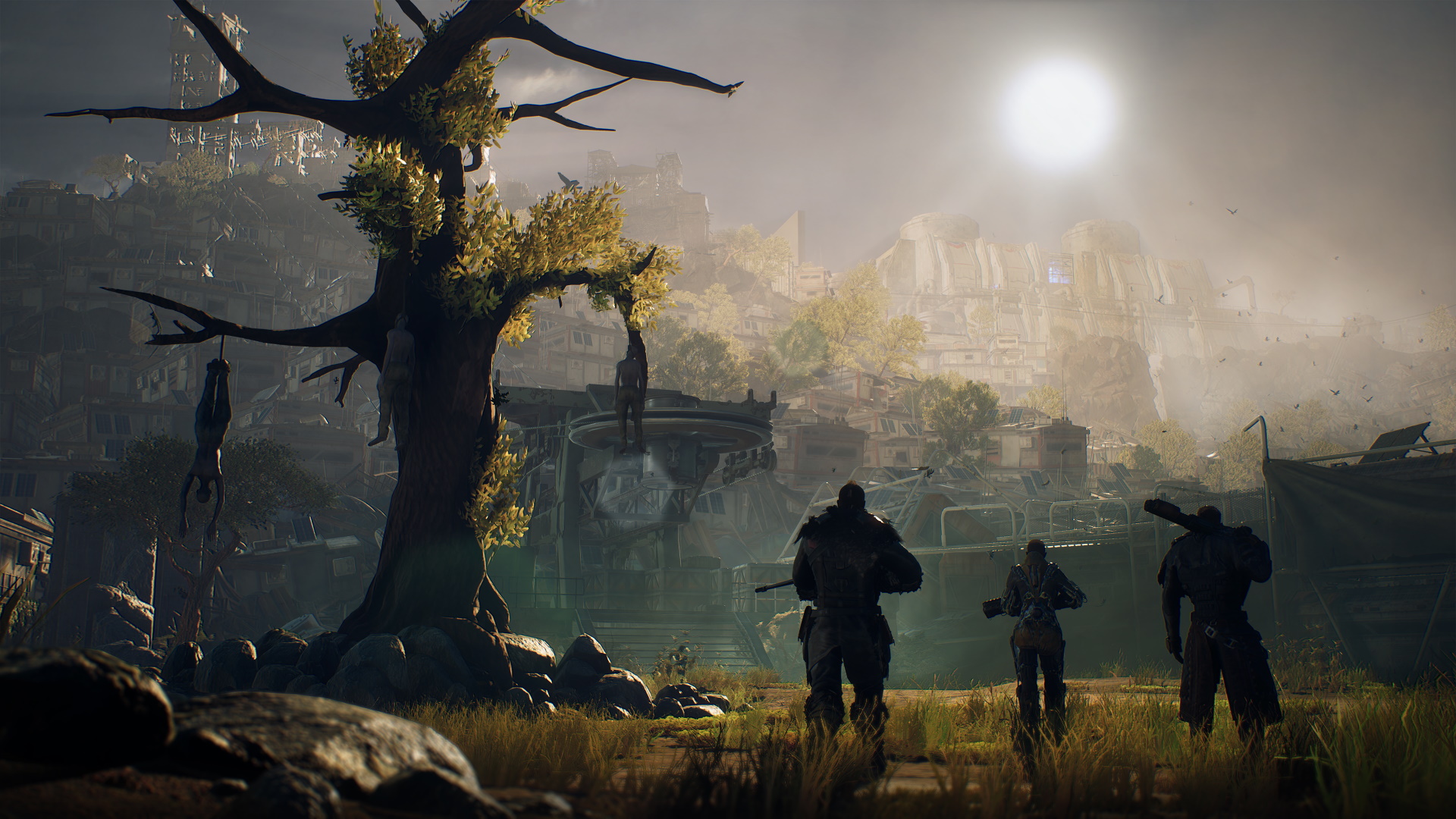 The character abilities are similar to Overwatch where there are a few skills and an ultimate type skill all usable on cooldowns. The Trickster has an ability that hits enemies with a sword that turns them into skeletons, making them more susceptible to damage from all types while they’re shape shifted, and then they explode for damage once the effect wears off, and an ultimate type ability that basically gives him a bubble that heals them while inside and slows enemies who are inside of the bubble.

Another place you’ll find a Destiny comparison is that the characters have an equipment rating, similar to Light Level or Gear Score in Anthem. The biggest kicker to Outriders is that there’s a scaling difficulty, similar to what you’ll find in Diablo 3’s torment levels. As you progress the game, the difficulty increases as you keep playing with their smart AI levels, and higher difficulties mean better drops and more rare loot. If it’s too hard, just drop the difficulty back down and keep going. I noticed that as I played I started finding more elite enemies and champions, ultimately leading to a point where I fought very few “grunt” type weak enemies and instead had to survive waves of Berserkers who were incredibly fast, could take a beating, and could easily shred my health to nothing in a matter of seconds.

While I didn’t get quite as long with Outriders as I would have liked, it blew me away with how good it was. This was my favorite game I played at PAX East, only slightly edging out DOOM Eternal. If my hands on time was any indication, Outriders just might wind up being my game of the year for 2020. We’ll see what happens when Outriders releases sometime this holiday.