Path of Exile’s next endgame expansion, Siege of the Atlas, picks up the story right after the defeat of the Eldritch Horror, Sirius. New threats are facing the Atlas and Wraeclast, seeing players defend the Atlas with new items and abilities, a revamped, Atlas-wide passive skill tree in a way only Path of Exile could pull off, and an all-new Challenge League.

The story in Siege of the Atlas picks up with the defeat of Sirius from previous content. Kirac has taken map devices to an isolated island to form a militia to defend the Atlas and Wraeclast at large. Players will join up with Kirac’s militia to help against any threats to the Atlas.

However, it is quickly learned that two more Eldritch Horrors like the Maven, Sirius, The Elder and the Shaper are coming to the Atlas to wreak havoc and consume everything. As such, players will face off against new Pinnacle bosses and their sub-bosses: The Searing Exarch and The Eater of Worlds, as well as The Black Star and The Infinite Hunger. 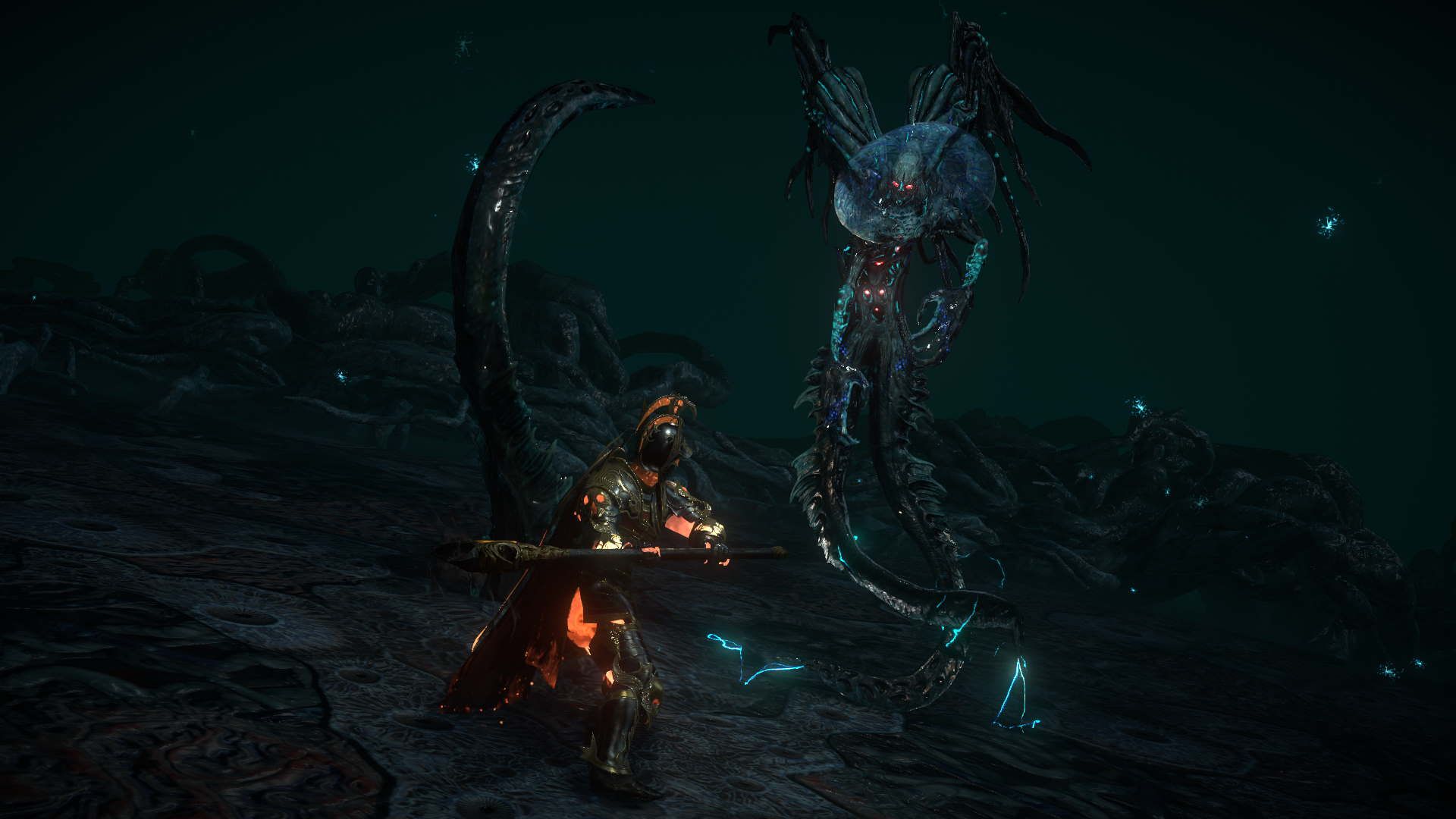 One of the ways maps will be different each time you jump into them is Influence, much like we saw with Shaper or Elder influenced maps before. While exploring mid-tier maps, players will randomly encounter the influence of either The Searing Exarch or The Eater of Worlds. You can choose to add either The Maven’s influence on your map, or any of the Eldritch Horrors you’ve encountered while going through your Atlas maps.

Players will eventually face off against the Horrors themselves, which upon defeating either The Searing Exarch or The Eater of Worlds they become farmable. However, to get to this point you’ll need to take out their sub-bosses, The Black Star or The Infinite Hunger. You can also find a key to take on The Black Star or The Infinite Hunger, though because you can trade this key there’s not requirement you need to kill the first boss.

Coming with Path of Exile’s next expansion is a new mechanic called Voidstones. Watchstones, you may recall, came with the last iteration of the Atlas which required players to balance the placement of 16 different stones to unlock new maps or raise the level of your maps. Thankfully, this balancing act is over as Watchstones have been removed in favor of Voidstones.

As a result, the hidden maps have been added back to the base map of the Atlas. Additionally, if you were afraid of losing the powers from Watchstones, these have been added to the Atlas Passives, giving players access to them still.

Voidstones act as a way to still power up the maps of the Atlas, though. There are four stones to be had, from The Maven, The Searing Exarch, The Eater of Worlds as well as the Uber Elder. Using all four Voidstones will raise the tier of all the maps in the Atlas to 16.

That Skill Tree, though

Path of Exile is, and always has been, a complex game. The sheer amount of loot customization, character class build variety as well as ways to farm Atlas maps and more make for some of the most interesting ARPG builds in any game in the genre. Path of Exile also has one of the most complex, branching skill trees in any ARPG, and the changes to the Regional Atlas Passive Trees with Siege of the Atlas just continue this legacy. 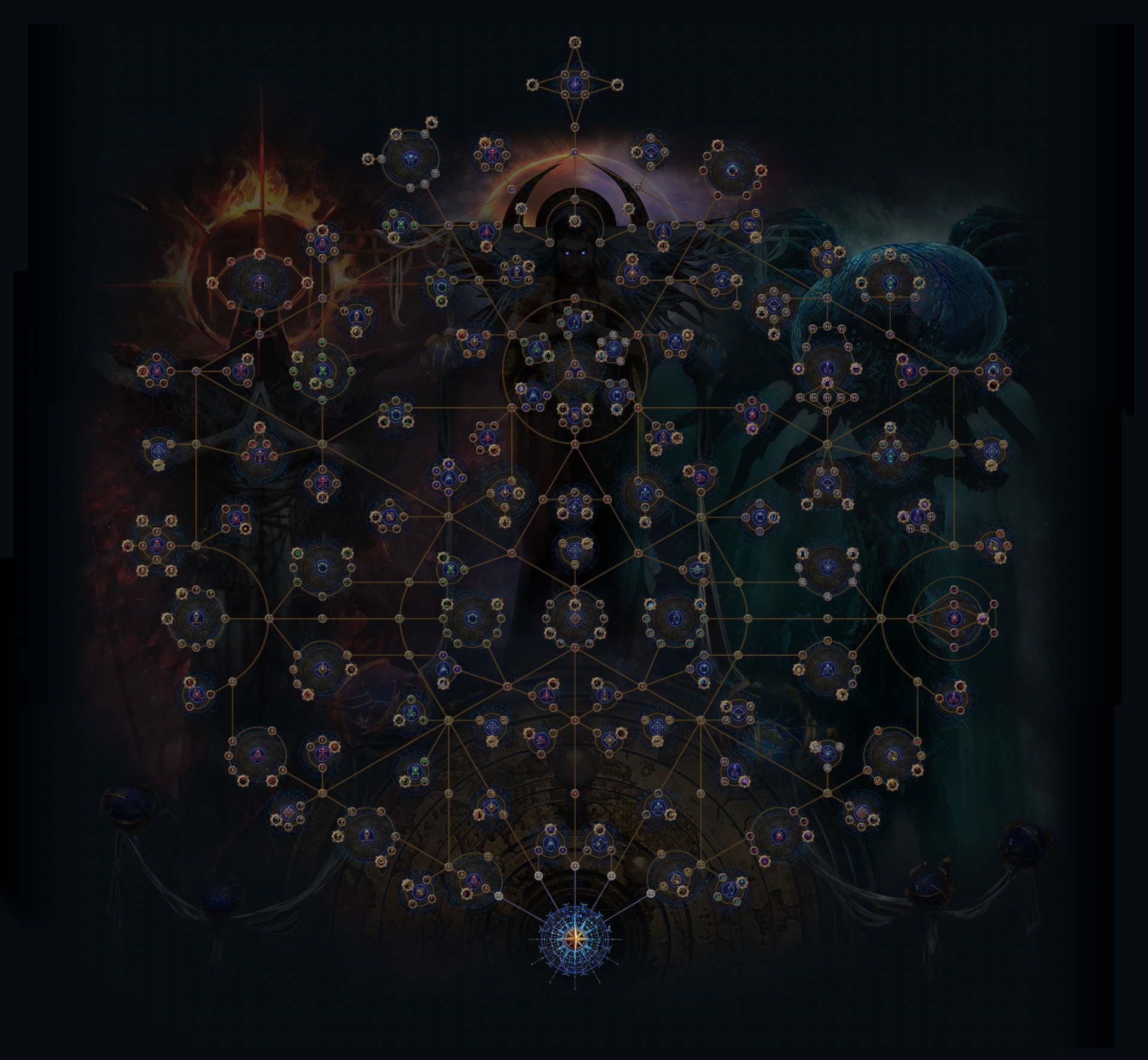 With over 600 passive skills available on the new Atlas Passive Skill tree, there possibilities are endless with how you build your character. You can earn up to 117 Atlas Passive Skill Points and Grinding Gear Games states that these skill points will feel pretty frontloaded at first thanks to the quick pace you’ll be completing Atlas maps. 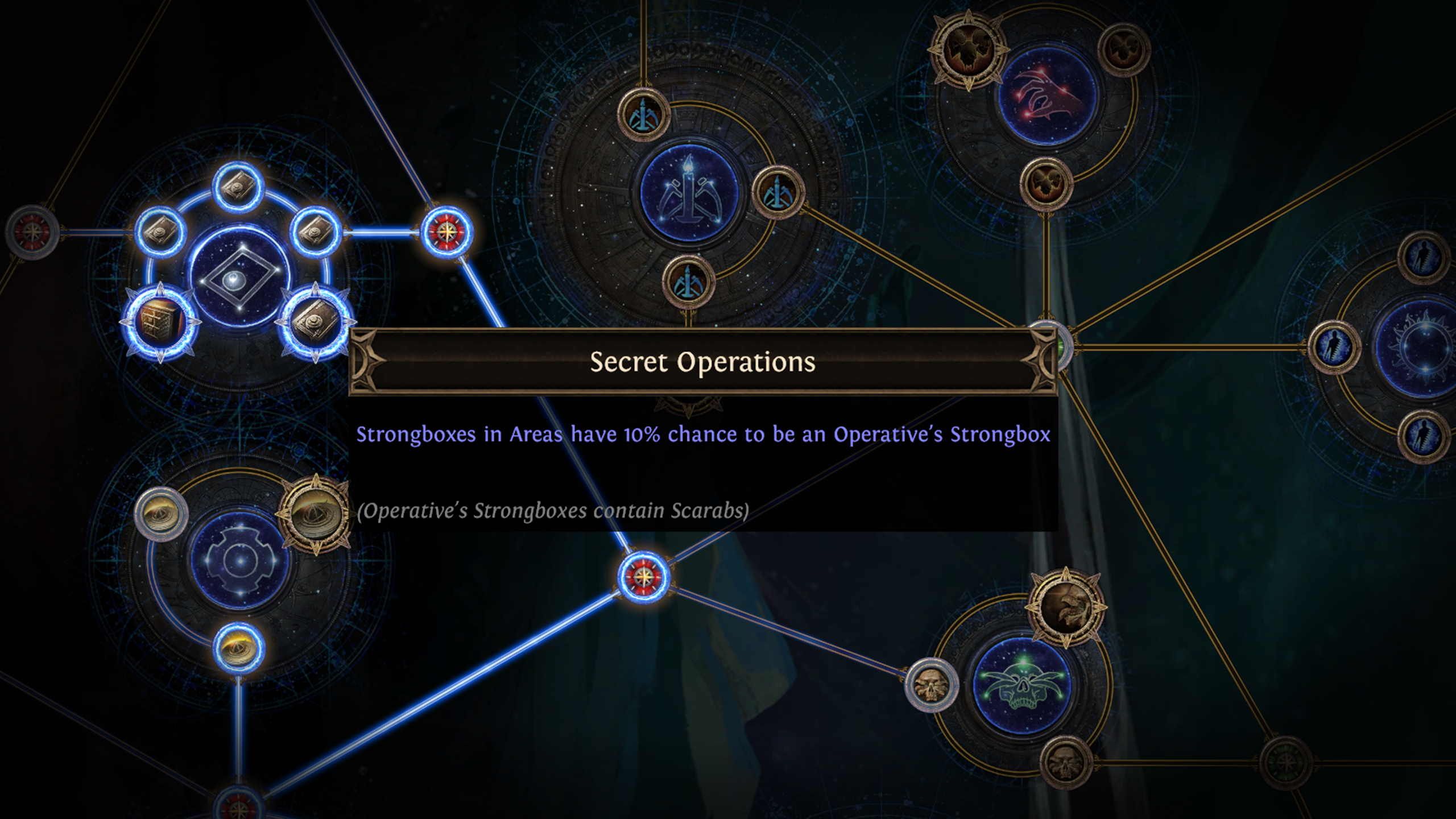 The goal here according to the developers is to allow players to specialize in content while not being restricted to what is available a specific region of the skill tree. The new skill tree incorporates old skills from the previous Passive tree while adding new ones, such as Secret Operations, which turns some strongboxes encountered into a new type that drop Scarabs. The choice is yours with how you want to play, with the ability to respec later if you choose.

Path of Exile wouldn’t be Path of Exile without modifiers to change up your experience and a deep item customization option to really home in on the build you want. A new mechanic, Eldritch Implicit Modifiers, gives a new way to create some of the most powerful items in the ARPG.

These mods replace existing Implicit mods, and an item can have a modifier from both The Searing Exarch and The Eater of Worlds at the same time. To do so you’ll need to find new currency items: Eldritch Ember and Eldritch Ichor to modify your item. Once applied, these modifiers augment your weapon with the mod, giving you two distinct pools of modifiers to draw from to create the best version of the item that matches your style. Applying the same currency over again will overwrite existing mods, allowing you to home in on what you want if you don’t get it the first time. 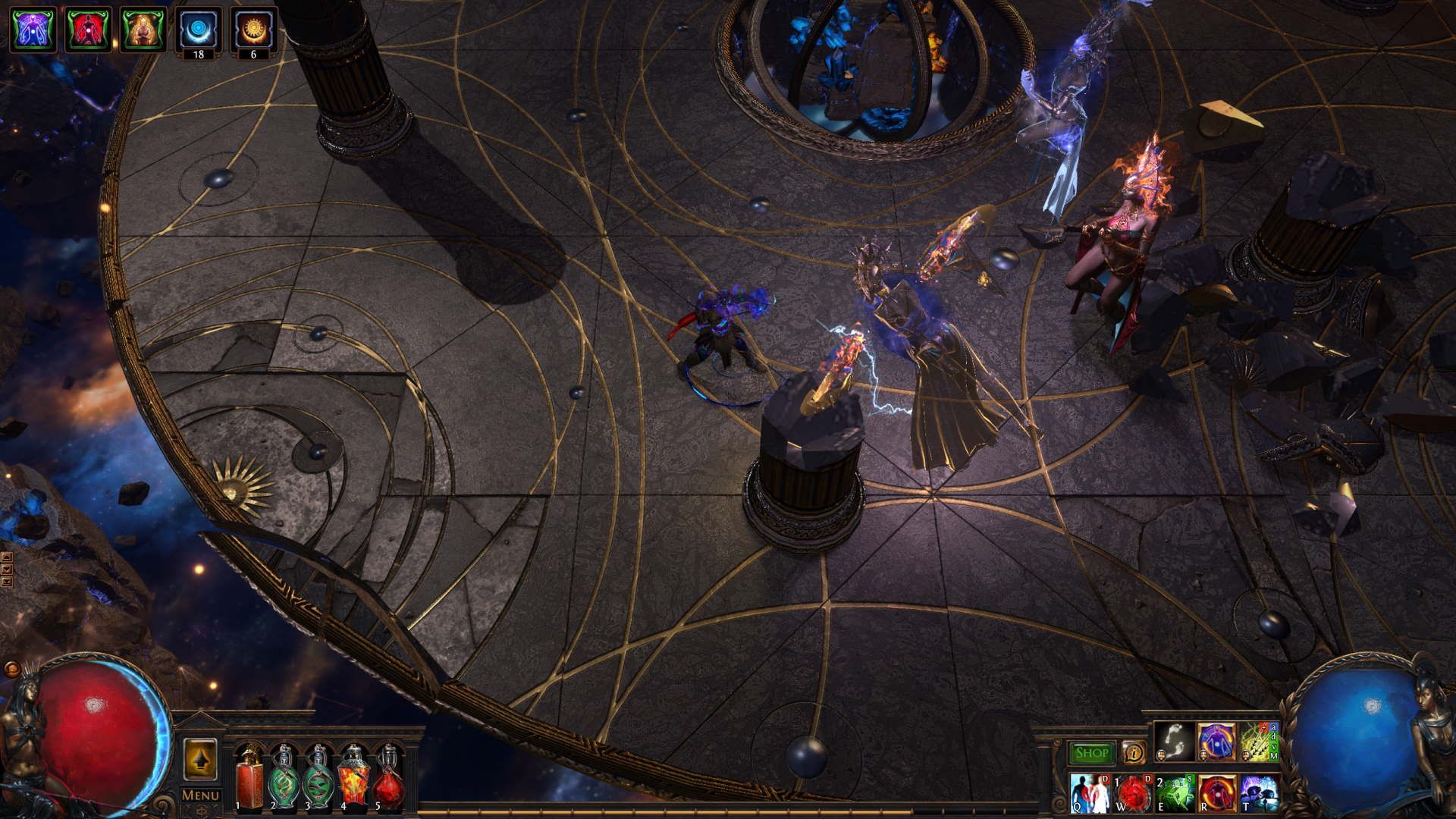 The goal here is to get both a Teir 6 and a Tier 4 Eldritch Implicit Mod at the same time. This is done by upgrading your mods with a higher tier currency called Orbs of Conflict. By doing so you can lock in the Implicit mod you want at Tier 6 while using the lesser currencies to max out the second item at Tier 4, giving you the ultimate version of your item.

As with every major expansion to Path of Exile, a new challenge league is being introduced alongside the endgame content. The Archnemesis Challenge League will launch the same day as Siege of the Atlas, allowing players to take on rare monsters for rewards to use in your adventures.

The Archnemesis league sees 60 new monster mods which can be combined into 35 different recipes in order to augment each fight. You’ll encounter four different monsters that are frozen in place. When you choose to take on one of the monsters you’ll be able to add a modifier to empower the monster to do battle. Once defeated the monster will give you a reward corresponding to the modifier you empowered it with.

However, these stack as well, meaning the second monster you fight will have the empowered mod from the first, as well as the new mod you’re stacking on top of it. Same with the third and fourth, meaning by the time you take on the last monster you’re in for a real challenge. Thankfully, these monsters also drop rewards for each modifier for each fight, meaning by the time you’ve tackled that fourth boss you’ve earned that first reward three more times.

Of course, being Path of Exile there are ways to make these combinations and rewards as crazy and over the top as possible, such as ordering the mods in a way to potentially see over 60 rewards, with even more ways to see yourself as rewarded as possible.

There is a lot going into Path of Exile: Siege of the Atlas. The developer livestream today still feels like it’s only scratching the surface, especially with the full breadth of the Atlas Passive Skill trees to pour over. However, players can start gearing up and planning for the next fight in the Atlas as Siege of the Atlas launches on PC on February 4th and consoles on February 9th.