There was a moment towards the end of one of the first major sections of my Far Cry 6 hands-on preview where I felt I might never proceed. It was frantic: fighting against the henchmen of Anton Castillo, the antagonist in this installment in the Far Cry franchise across two large boats as myself and the other Guerilla fighters aimed to escape the island and take the resistance to the heartland of Yara.

Over and over again I found myself diving for cover, attempting to escape the hail of bullets raining down on me on all sides, all the while my allies fought Castillo’s dogs in their helicopters, boats and more. I died quite a few times in this endeavor, but eventually I cleared the boats of enemies and was able to make my way out of the effective starter island and into Yara proper. I remember rocking on my heels (the action was so intense I actually had to stand up at my desk while I played to better anchor myself), a smile wide on my face. This, this right felt like Far Cry: intense, large set-piece battles amidst a more sinister backdrop, this time facing off against a brutal dictator on a fictional island set in the Caribbean.

Far Cry 6 Is the latest mainline installment in the franchise taking players to the fictional island of Yara (which is pretty loosely based on Cuba), and sets them into the role of Dani Rojas. The series lets you choose between playing a female-presenting Dani, or a male-presenting protagonist much like other Ubisoft games recently (most notably Assassin’s Creed Valhalla). Dani is tasked with helping assist a modern guerilla revolution movement, called Libertad, as they seek to liberate the island from tyrannical Anton Castillo.

Castillo, for his part, sets an imposing presence the first time he enters the frame. Far Cry has long been defined by its compelling villains, and Castillo feels poised to stand among them as one of the greats based on just the few interactions with him in our gameplay demo session. Spurred on by his vision to recreate paradise on Yara by using Viviro, a drug made form biohacked tobacco leaves which is handy treatment for cancer, Castillo seeks to keep his country focused on its production in order to bolster Yara’s place on the global stage.

Throughout my time exploring the colorful island of Yara, these scars were seen all throughout my travels. Shanty towns with poor, decrepit villagers struggling to make ends meet dotted the landscape. Farms complete with armed guards, watch towers and more to protect the product looked like veritable Fort Knoxes. The horseshoe-shaped island we started on was full of various locations to scout, attack and just explore.

I really enjoyed the dense jungle at every turn, getting lost along the path only to be set aright thanks to the various visual cues and markers set in the world meant to clue other guerrilla’s towards camps, caches, hideouts and more. It was a cool way to remind players of where to go and how to get there without relying on a compass marker or a waypoint – simply look for the blue painted marking on a cliff wall or a rock along a pathway to make sure you’re headed in the right direction back to the Libertad hideout deep in the rocky and jungle biome.

The characters of Libertad are also endearing, though we were barely introduced to each of them in the few hours we spent with Far Cry 6. We got to play through the opening missions in the game, as well as check out Far Cry as it opens up a little bit later on in the storyline. Finally, co-op is coming to Far Cry 6, which we were able to take part in about an hour of co-op play, allowing two players to travel and complete missions together where progression is carried back to your own save game, regardless of whether you were the host or not.

Far Cry 6’s characters are all about liberating Yara from Castillo, and each mission takes Dani one step further towards helping Libertad on that goal. One mission had me infiltrate what looked like an old Spanish colonial fort which had been built up into a modern fortress only to steal some material Juan needed to make me another vital part of my arsenal – a deadly Supremo (in the early stages it’s basically a rocket barrage strapped to your back). Another mission had me seek out an older group of guerilla's to see if they could lend their weight to the cause. 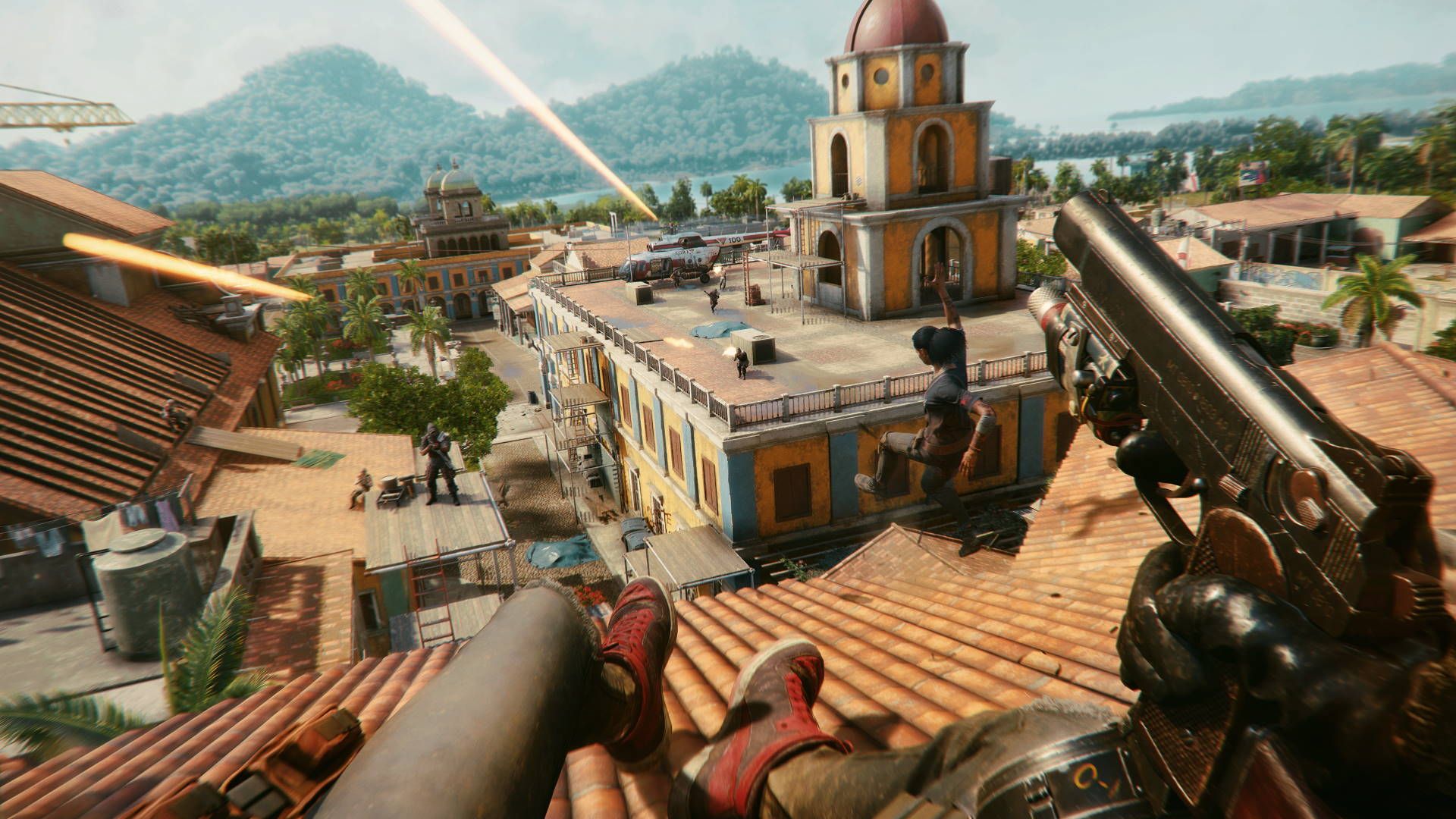 Character and weapon customization greatly impact gameplay, either with a piece of clothing that might protect you from fire better than most, or by arming your assault rifle with armor piercing bullet to take out more hardy foes at the expense of incendiary ammo on a mission. Mix and matching your arsenal to be prepared for any situation is paramount as well. A guerilla only gets surprised once. Choosing the right load out and experimenting with what you like and don't like is key to ensuring Dani survives as long as possible to help Libertad.

Like all Far Cry games, your environment around you is a playground as well. You can use height, explosive objects around you and more to your advantage in a firefight, or go silent and stealth your way through Castillo’s henchman. I found myself trying a mix of both – using materials gathered while exploring and on missions, I was able to craft a silencer on my rifles, greatly reducing the noise each weapon made when I’d infiltrate an enemy stronghold. However, even these modifications have limitations, as I found out to my detriment later on in the playthrough. The silencer, for example, is really great the first few shots, though as it heats up it’s basically useless at stopping sound from alerting nearby guards to your presence. Weapon customization is key to ensuring you’re both able to approach Far Cry with your distinct playstyle, as well as survive in the firefight. As Juan says: always have the right tool for the job.

Also at your side is a companion, such as the two-legged, yet incredibly lethal dog Chorizo which has been seen mostly in the promotional materials. A small alligator can also join up with you early on, though my favorite companion thus far has to be the Yaran Dictator-hating rooster, Chicharron. The quest chain to unlock this companion was insanely fun, following around Chicharron as he wreaked havoc on Yaran strongpoints, destroying documents in a neon-fueled rage in one mission, or sabotaging the unveiling of a monument dedicated to Castillo’s deeds in another. Chicharron was such a fun companion to follow around for a few missions, and just as fun to sic on an unsuspecting guard once he decided to join up with me.

As mentioned before, Far Cry 6 will also feature full co-op, allowing two players to jump into the role of Dani and liberate Yara together. During my hour or so with a teammate, it was interesting to see just how drastically we had built our characters during the playsession. I had gone more stealthy, with silencers and more that would keep me hidden until I could hide no longer. My teammate, however, was a bit flashier, eager to jump into the heat of the battle, Tostador fully at the ready to roast anything in its path. Doing the few missions we did (we both got a kick out of the Chicharron storyline), as well as one of the side activities, a treasure hunt that saw us follow a large seagull to a treasure chest at the end, was pretty fun. Progression is saved for both characters as well, meaning you needn't worry about losing time out of your single player game - you pick right back up with everything you gained in your co-op session as if the other Dani wasn't even there.

As I went through the missions themselves, especially early on, while your approach itself can vary, they all seemed somewhat familiar in the set up. Go to X, scout the area with your phone, complete the objective. This was true whether I was scouting the aforementioned fort or sitting atop a tower planning how I’d destroy a Viviro farm. It felt a bit routine and I found myself abandoning this approach later on as I explored the island and completed missions for other Yarans around me.

And Yara is absolutely beautiful. I felt transported to a tropical island frozen in time. OId cars dotted the streets, relics of a time before an embargo would have been placed on the island. Technology existed, but Libertad seemed to have only a small number of modern gadgets, instead relying mostly on what they could make out of what they scavenged throughout the land proper. The island itself is colorful, its dense green jungles littered with vibrant plant life (and pissed off wildlife). The sparkling blue ocean twinkled as I drove around the coast of Yara’s first island, reminding me that I was stranded there until Dani could rid the island nation of its brutal dictator.

The enemies themselves didn’t seem all that smart early on, however. Though as I increased my guerilla rank and got deeper into the island, they became more well equipped and harder to get around. Once I had been placed on the main island with more gear, higher rank and a little farther in the story in order to get a sense of how it feels a couple of hours in, however, the push back by Castillo’s forces were more pronounced. Waves of enemies felt like they could overtake me at any moment during a mission that saw me and some other guerilla fighters defend a crash site that provided valuable medical supplies to Libertad and her allies. I had to have died at least four or five times as the soldiers flanked me or coordinated their fire on me as I tried to move to a new vantage point. It felt markedly different than even those early hours of gameplay – a sign that Castillo was seemingly clamping down on the Libertad resistance. 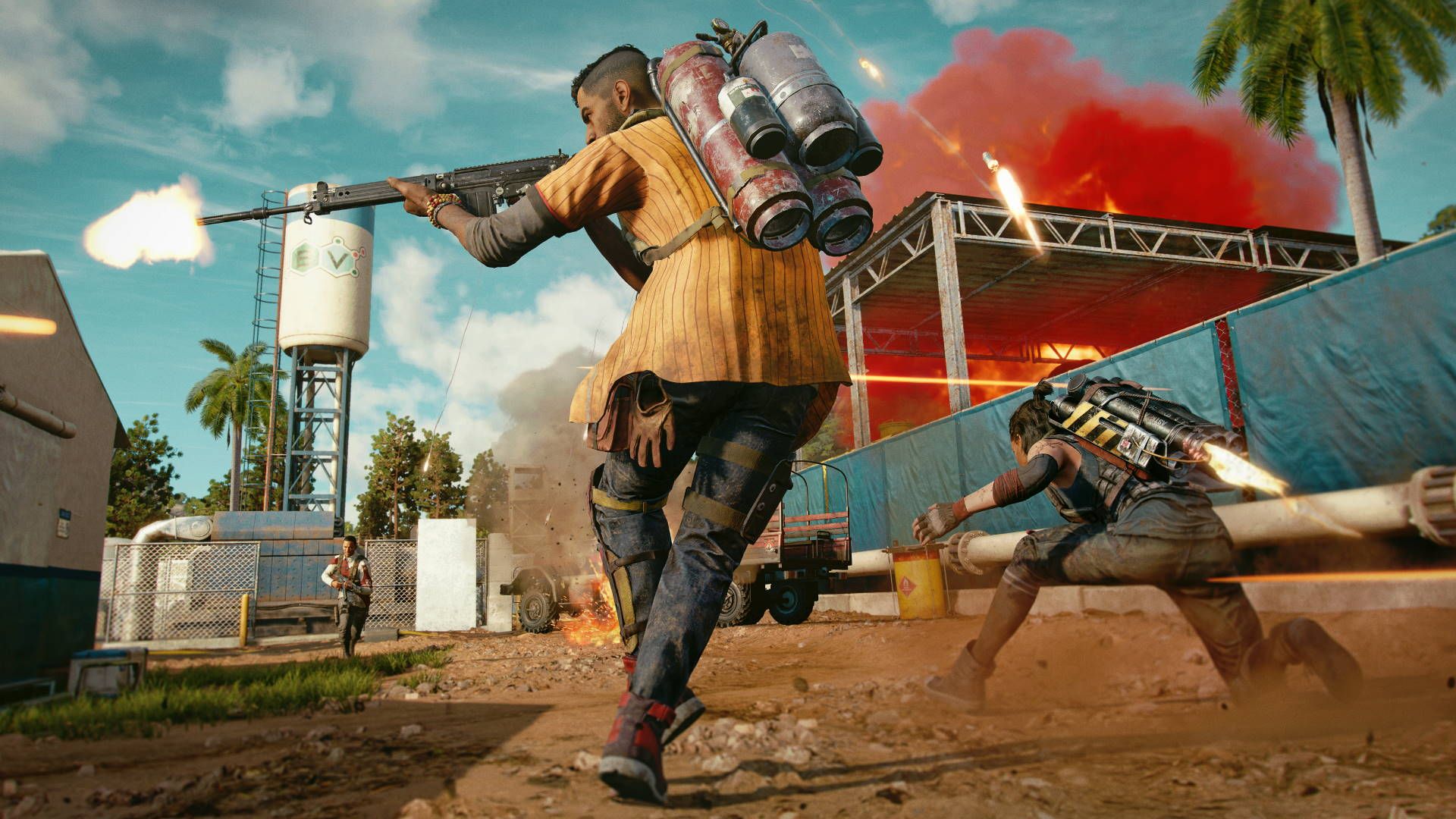 In fact, as you level up and progress throughout Far Cry 6, this is meant to happen – Castillo will send more patrols and better trained and equipped troops to snuff out the last of the guerillas on his island. This creeping up in difficulty and challenge likely would feel more gradual as you personally progress your version of Dani in the real game when it releases later this year, it did feel a little jarring to just be thrown into it a few hours into the demo, though.

That being said, I can’t wait to spend more time running through Yara, learning more about how to be guerilla fighter against the brutal Castillo when Far Cry 6 launches on October 7th.