With a pinky gently touching the side of my mouth, I eagerly booted up the preview build for Evil Genius 2: World Domination from Rebellion. I was very excited to run my own evil empire, sending minions around the world to fulfill my every whim and heed my every word. Money, power, influence, I wanted it all, and I hoped Evil Genius 2 would deliver the goods…

...but as it turns out, being an evil mastermind with aspirations of world domination requires a whole lot more grunt work than I had anticipated.

Evil Genius 2 is a point-and-click management sim, giving me complete control over the layout and customization of what is meant to become a world-conquering evil lair. Think Globex Corporation from The Simpsons or any of Dr. Evil’s extravagant hideouts, that’s what I’m building here. I’ve given a choice of a genius before I start (well I will be, the preview build only let me use the Blofeld-looking Maximilian), and I use that evildoer’s perks and abilities to begin building my fortress of eviltude. If you’re expecting a game where you’re leading an army against the world in order to conquer it you’re going to be disappointed, this is a management sim down to the core, but there’s still a ton to like here.

The bulk of Evil Genius 2 is building and managing the aforementioned evil hideout, mapping out rooms for different functions, filling them with equipment, and powering the place. I have to keep my workers fed and rested, manage resources, keep costs down, and fend off would-be spies by siccing my drones on them. As my empire builds I can train workers for specialty jobs, including technicians that repair broken machines and guards that keep us all safe. Completing missions, both in a main storyline and optional extra quests, earn me more resources that I can put back into the hideout. I’d be inclined to change the name from Evil Genius to Evil Business Owner, because that’s what this game feels like, but I imagine that wouldn’t go over well. 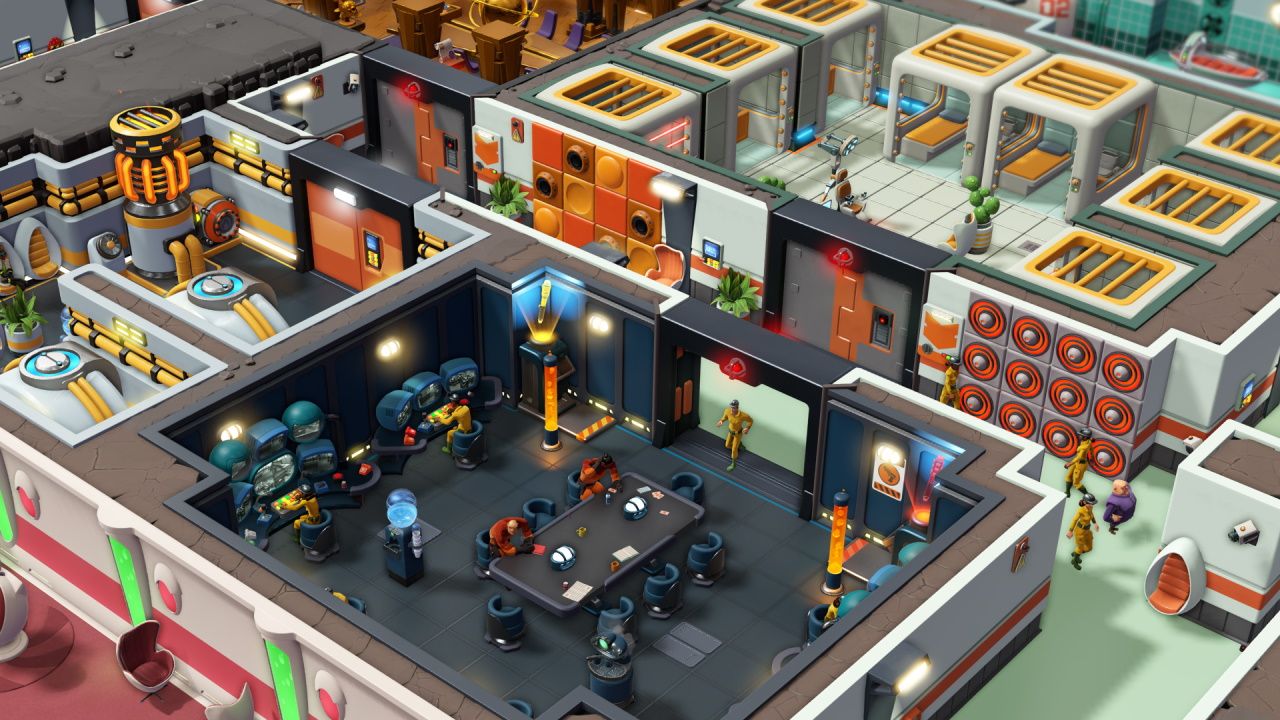 That may sound monotonous, but I have to admit the game does a terrific job of keeping my interest. The robotic female voice that alerts me to new tasks or emergencies gives me a jolt of energy every time I feel like I’m slipping into boredom, the full customization options give me a great sense of agency about my evil agency, and watching my workers grow and become more powerful members of the lair is rewarding. I do worry that after a while this format would get old, meaning the main storyline will have to do the heavy lifting to keep me going when the full version releases.

Building a successful evil empire reaches outside my lair too, as there’s a world map that allows me to scout areas for potential evil expansion, Schemes where I can send workers to those places to gain resources or kidnap people of interest, and slowly gain world recognition. The tradeoff is any workers that fly out to these areas never come back, working exclusively in the field from then on. While expansion does help the mother base, I can’t leave myself without workers either, which adds another layer of management to this sim.

Speaking of story, I’d guess Rebellion made note of the potential monotony of the format as they’ve included small cutscenes sprinkled throughout, usually featuring the genius I chose and a poor grunt on the receiving end of a tongue lashing. These are cheeky, silly little cutscenes that keep the tone of the game lighthearted, and I genuinely enjoyed having them to break up the standard gameplay. That lighthearted tone is undercut by the “throw the body bags of dead intruders and workers into the incinerator” tasks but hey, I am building an EVIL empire after all.

Evil Genius 2 throws a ton of menus and tasks at me, but in the end I do enjoy building this evil lair to my liking. Just when things start to feel like a grind, a quick side mission or silly cutscene snaps me back into place. While I do have concerns about the long-term willingness of players to keep up with the grind, the foundation I’ve seen so far is devilishly delightful. We’ll see if this Evil Genius indeed takes over the gaming world when World Domination launches on March 30th.