Dune: Spice Wars, a new real-time strategy game being developed by Shiro Games and published by Funcom, is releasing into Steam Early Access on Tuesday, April 26th. With the positive reception of their Norse-themed strategy title, Northgard, Shiro Games has proven they understand what it takes to make fans of the genre happy. But do they have the chops to take on a universe as iconic as Frank Herbert’s Dune? We got an early look at Dune: Spice Wars, and I can tell you that Shiro Games has gotten off to a better start on Arakkis than House Atreides did.

Dune: Spice Wars takes much of its inspiration directly from the books, but Shiro Games has stated their adaptation is influenced by all of the Dune source material, including the movies, board games, and previous video games. Players can expect a lot of familiar names and places, with each faction’s troops and abilities mirroring their strengths and weaknesses from the source material.

At the start of each game, you have four factions to choose from - House Harkonnen, House Atreides, the Smugglers, and the Fremen. All of the factions have different strengths and abilities that determine their play style. The Oppression ability of House Harkonnen, for example, allows you to quickly increase production in a region at the cost of inciting unrest in your population that lasts well after the initial boost in resources, while the Fremen can use thumpers to attract and ride Sandworms across the map. 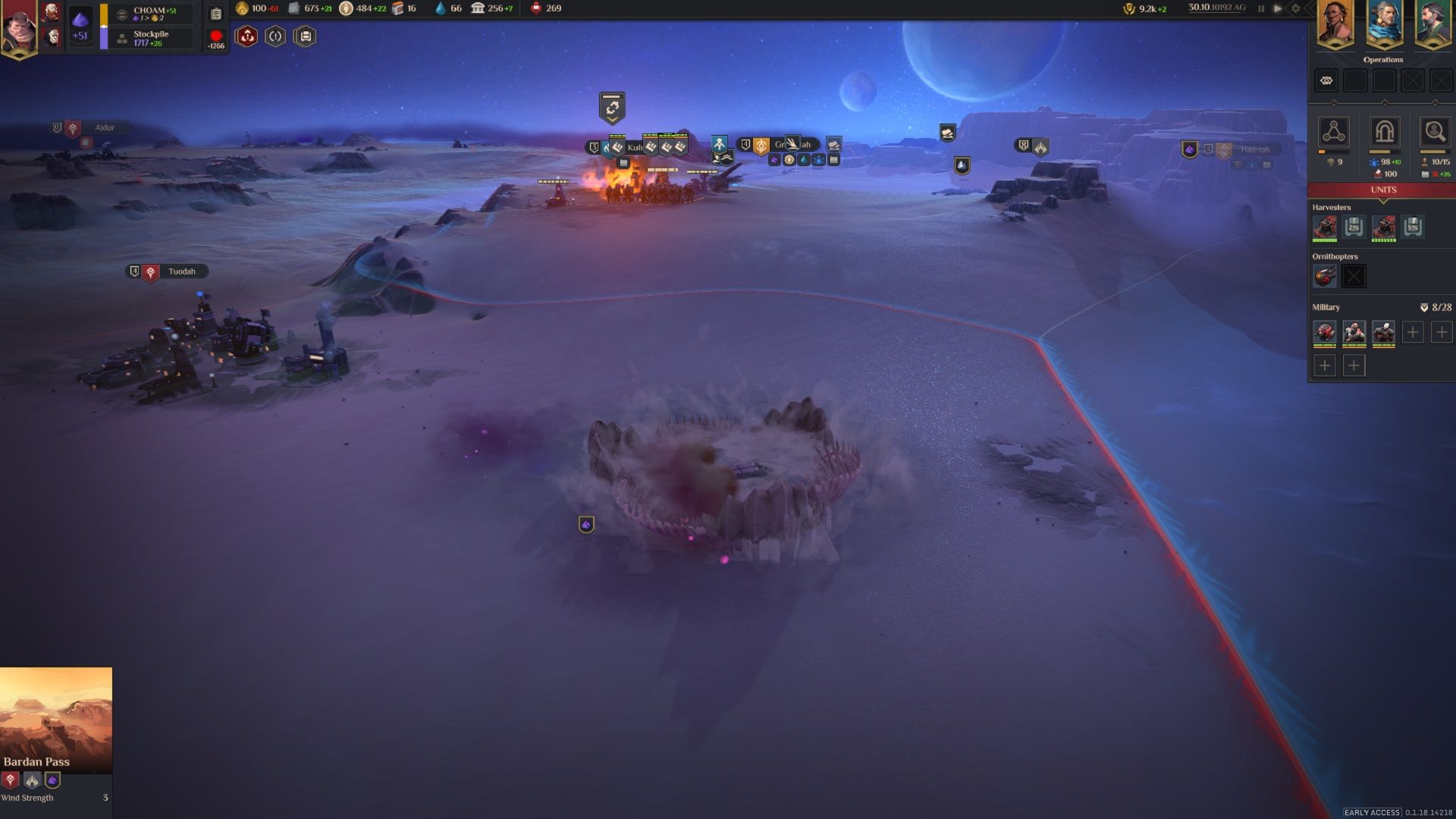 Each faction also has four advisors with unique bonuses to exploit as you play. You are only able to pick two of the four advisors, so mixing and matching advisors offers some subtle differences that will affect your playthrough. For example, some advisors will have modifiers that make early expansion easier but are less effective later on, while others have bonuses that take longer to develop but can be the difference in success or failure late in the game.

Beyond their special abilities, much of the gameplay is identical for each of the factions. Regardless of your faction, you’ll need to immediately locate and begin farming spice. Without it, you won’t be able to pay the ever-increasing bribe needed for the Spacing Guild to turn a blind eye to your activities. You’ll also need to collect water and generate plascrete, fuel cells, manpower, and Solari (cold hard cash) to grow and maintain the upkeep of your territory. Running out of any of these basic resources will not only stop your territory's growth and bring your war machine to its knees, but unhappy citizens will also begin to revolt, making it that much harder to generate the resources that are already in short supply.

And that’s just the raw materials you’ll need to fuel your economy as you attempt to conquer Arrakis. Military units will need to be created to go on the offensive. Then there are military bases, missile batteries, and airfields to help you defend your land, not to mention the variety of facilities needed to grow your intelligence network. And let’s not forget that Arrakis itself is a hostile environment that must be looked after. Along with the main factions, players will have to contend with other minor Sietchs, and sandstorms and sandworms are always a threat to your operations.

This is all standard fare for an RTS, though. And honestly, the number of buildings and troop choices available in Dune: Spice Wars pales in comparison to some of the more complex strategy games out there. There is a reason to keep the city building and combat all relatively simple, though.

The Dune universe has always had more than its fair share of political intrigue and subterfuge, and Spice Wars is no different. As you build your empire, you’ll also have to deal with espionage and politics on a regular basis. And unlike many other RTS games, Dune: Spice Wars requires you to manually control all facets of your faction. That means you will be dedicating time to allocating agents to intelligence gathering missions and visiting the Landsraad Council to sway voting on resolutions in your favor. It all seems easy at first, but after your third or fourth harvester gets eaten by a sandworm, you start to understand just how much you have to manage when you don’t have AI governors controlling all of your day to day functions.

Although all of this plays out in real-time, much of Dune: Spice Wars feels like a turn-based strategy game. For starters, unlike many RTS games where the map is one single entity full of random resource nodes, Arakkis is split up into regions, each one containing a village. There is no need to build a defensive ring around your starting point to extend your boundaries; you only need to take control of a village to control whatever resource the area is rich in, be it spice or some other commodity. Only the owner of a specific region can access any resources it holds, and the mere entry into a foreign region begins to drain your unit's supplies, followed by its health once their supplies are gone.

The need to keep your units supplied means that territory growth is very much like a game of Risk, with your exterior regions always at risk of attack while your interior space is much harder to attack directly. Even in the event an enemy is able to make a deep surge into your territory, it takes time to convert a village to your control, giving the standing owner time to mount a counterattack. This makes combat a slow, expensive endeavor that all but eliminates the ability to overwhelm opponents with a zerg-style attack. Instead, you must take the time to build a strong infrastructure before mounting a prolonged offensive.

As Dune: Spice Wars enters Early Access, it is obvious that Shiro Games still has a long way to go before they have a completed game. There currently aren’t any campaign or story missions to play through, so Spice Wars is entering Early Access with only a standard conquest mode to enjoy. And although there are plans to add multiplayer support at some point during Early Access, right now it’s just you against three AI-controlled factions.

Even in its bare-bones state, though, it is obvious that we aren’t dealing with a simple military-focused experience where might is the sole means for victory. During my first attempt at Dune: Spice Wars, I did indeed try to take a military-only approach, only to find my faction unable to bear the cost of battle. On subsequent attempts at controlling Arrakis, I began using espionage and the Landsraad Council to weaken my enemies before striking, and that balanced approach worked much better. As Shiro Games continues to flesh out these systems, I am certain that Dune: Spice Wars has the potential to offer a rich experience to fans of the strategy genre.

I’ll be especially interested in seeing how Shiro Games handles multiplayer. Will they give players the ability to work behind the scenes to create alliances? Will you have the means to secretly trade resources for votes as you attempt to weaken another faction, or will multiplayer be merely an extension of the single-player experience where the AI is replaced by humans with no additional means of communication? I sure hope so, because the Dune universe is about more than just military might, it is about amassing power through any means necessary, and from what I’ve seen so far, Dune: Spice Wars has a foundation that is primed to take advantage of all that universe holds.