New World’s next major update brings with it a host of changes, as well as the largest zone built in Amazon’s MMO to date. But it might not be the hot desert of Brimstone Sands that raises the most eyebrows when this new update hits New World in October. A year after releasing, Amazon is completely revamping the New Player Experience, specifically with an aim to ease onboarding and center on the main story.

When New World launched in 2021, much of the complaints surrounding the MMO had to do with what was seemingly an unfocused story, coupled with a boring, grindy questing experience. The grind, while is something many MMO player relish, ended up being too monotonous, too boring, and, well, too grindy at spots.

Much of this was exacerbated by the sheer fact that quests could see players running across the whole map of Aeternum, only to have to race back to their starting point in Windsward early on. While back and forth is normal, this was an extreme, especially with the limited fast travel spots, high fast travel cost, and the lack of mounts to help players speed along their way. The individual character of the various zones in Aeternum lost their charm with each passing hour I spent running back and forth, back and forth simply to achieve a basic objective.

Additionally, as I noted in my New World review, the story itself, more specifically the characters, were largely forgettable, with the character Yonas being the only one I still really remember aside from the big bad Isabella. This isn’t helped by the fact that the quests themselves are not all that varied, while monster types were also pretty basic and repetitive. It all added up to a rather boring effort that made the leveling slog, especially early on, just that: a slog.

Amazon aims to fix all this with a complete revamp of the early leveling experience. By changing the format a bit, as well as consolidating and adjusting many of the very things players and critics mentioned were the biggest offenders in those early days, New World’s developers aim to make the new player experience on that is no longer a slog, but rather interesting and exciting to get through.

One major way they are doing this is addressing the need to continue to rush towards the Hermit’s Hut in Windsward at the completion of every major story beat in that initial 1-25 level grind. Now, Yonas is going to be more mobile, getting out and stretching his legs a bit to help reduce the amount of back and forth players have to do. The main story quests are also going to be consolidated in Everfall, making it easier to reach than the borderlands of Windsward and Monarch’s Bluffs.

Additionally, the overall quest flow has been optimized according to Amazon, with NPCs that move around, as well as building out a central story theme for each of the various starter zones. An emphasis has been placed on these themes, such as further exploring the influences of King Arthur’s legend in Monarch’s Bluff, or the reason the famine exists in Windsward thanks to the curse of the legendary Greek figure Medea.

Finally, the team is addressing some of the “sameness” that each starter zone exudes, despite the biome differences between, say, Monarch’s Bluff and the shipwrecked pirate settlement of First Light. The team at Amazon are upping the monster and NPC variety in New World’s starting areas, making each fight feel, we can hope, less monotonous than before.

While the early levels are getting this revamp, New World’s developers are stopping short of extending this revamp to the whole the leveling grind. During a Q&A with the Amazon team in a closed press briefing earlier this month, the team stresses that the current revamp, including the sped up leveling only applies to the first twenty-five levels. Game Director Scot Lane mentions that once they have feedback and data from players about how successful the revamp has been in the initial zones, then they can take those learnings and apply them to the rest of the MMO.

Some of the biggest changes come with the faction-based nature of New World. Lane mentions that they are changing the way players first choose and join their faction, though he didn’t really elaborate on how it would be different than before. Lane also conceded that the team doesn’t have a real way of stopping new players from just joining the dominant faction on the map, rather than creating a more balanced roster of factions on a server.

As a result, there aren’t plans for a territory reset either, though the team is looking at that as a possibility in the future.

“There is no reset at this point. We're looking at that in the future and ways to do that to incorporate it more into gameplay,” Lane states. He continued, “We’re changing the way you’re entering factions and when you experience [them], so it’s going to be a little different than it was. And the actual factions, they’re going to have really cool little areas set up for them. As far as stopping [new players] from jumping to the leading faction, we don’t have any mechanisms at this time to [prevent] that.”

We’ve heard about the Greatsword for a while coming to New World, and it looks like this major content update will finally bring it to Aeternum. The Greatsword itself will scale evenly across Strength and Dexterity, making it easy to pair with a large pool of other martial weapons in the MMO. 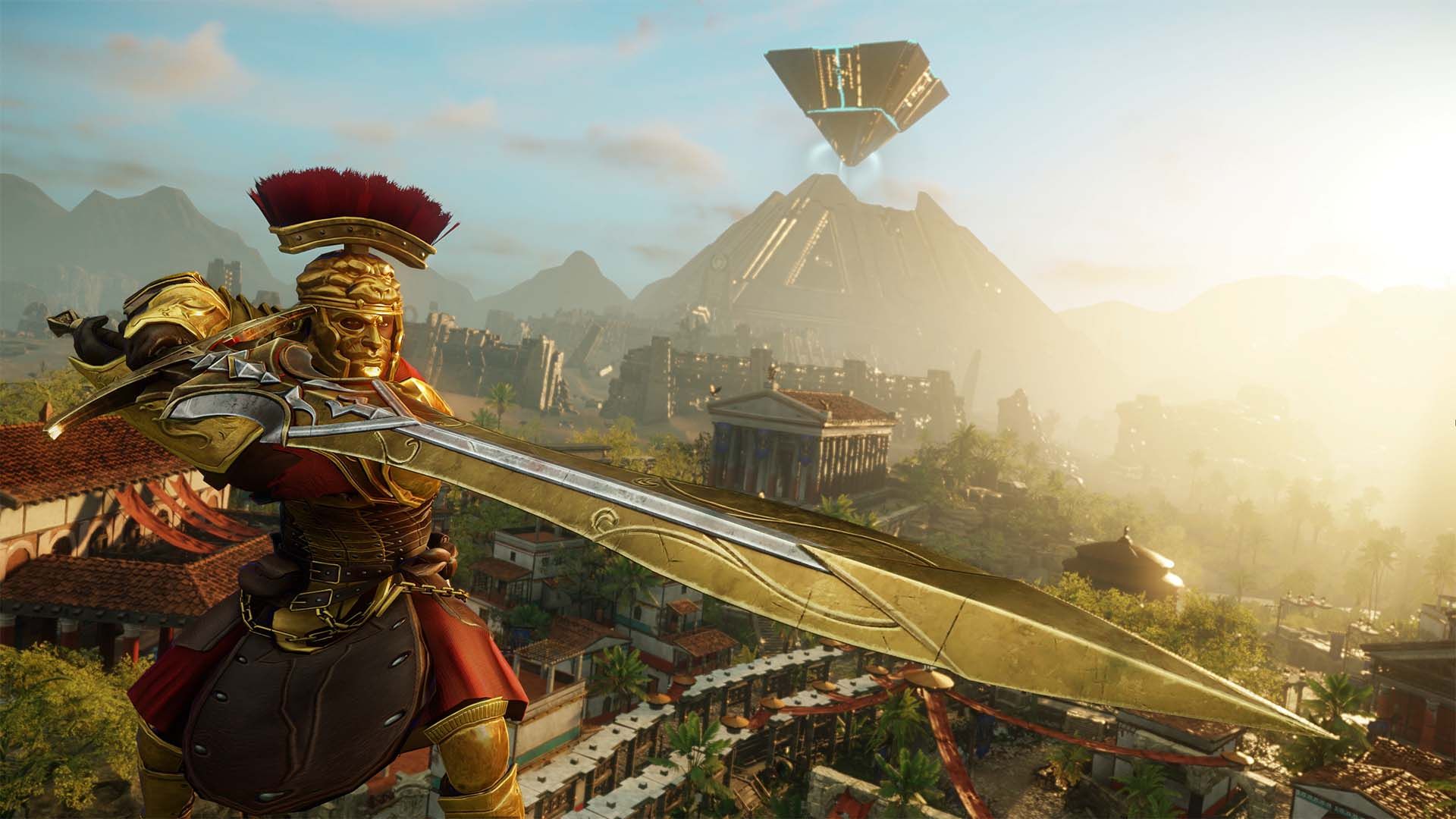 The powerful, two-handed weapon uses multiple stances as well to adapt how the battle is unfolding. The Onslaught tree sees the focus squarely on the offensive, taking out enemies before they have a chance to fight back, while the Defiance tree allows for an “aggressive defense,” able to tank multiple opponents while dealing death right back at them.

“It’s really exciting ‘cause this is going to give a lot of combinations because it feeds off of strength and dexterity,” Lane mentions in the Q&A. “It’s going to create new interesting combos, I think we’ll even see some tank builds with it.”

Admittedly, this is what I’m most excited about. Back in 2020, I wrote up an article with the five historical eras I’d love to see an MMO really take advantage of, and while I was envisioning a whole game built around these motifs, it’s still awesome to see New World take two entries off my list with Brimstone Sands.

The vast new endgame zone is a scorched waste, one the ancient Egyptians stumbled upon centuries before, building a vast civilization that has now fallen into ruin. The sands of Brimstone house monuments, ruins and more of that lost civilization, as well as house the souls that have been lost to the corruption across the new zone. Claiming to be three times the size of any other in New World, Brimstone Sands houses the godlike Ancients who came in contact with the Egyptians before the civilization fell to ruin.

Interestingly, it’s not just the Egyptian influence at play here. One of the first images we’ve seen of New World were Roman legions taken over by corruption. Welp, we know where many of them are now, as Brimstone Sands houses the remnants of the XIX Legion, who came to Aeternum with Mark Antony and his lover, a dying Queen Cleopatra.

While I adore the shipwrecked pirate themes of the older zones, as well as the Asian influences on Ebonscale Reach, the idea that I could uncover an alternate history fate of Mark Antony and Cleopatra has me very excited indeed. The new zone will see players have to uncover exactly what befell Mark Antony’s XIX Legion (especially since Octavian’s incarnation was destroyed in the Battle of Teutoburg Forest in 9 AD.

These deranged Roman soldiers make up some of the threats posed by the new zone, though the Anubian Guardians and other threats from the sands will be an issue. However, with the help of the sorcerer Imhotep, players will fight back the darkness being brought to the region by Huntress Adiana and the Angry Earth, all while delving deep into the heart of the pyramid Ahket to explore Ennead, the zone’s next Expedition.

Personally, I’m looking forward to exploring this new zone, learning more about the Roman influence in Aeternum, as well as unlocking the fate of Antony and Cleopatra, personally. New World’s next major update won’t require players to wait too long, either, as it’ll be hitting the PTR next month, while the live servers will see it launch sometime in October.