The New World preview time has come to an end and I’ve been fortunate enough to spend a bit of time in Amazon’s New World and despite some polish woes have genuinely had a good time.  It’s more than I can say about my time spent in the recent MMO betas and previews I’ve taken part.  Fellow peviewer Garrick has covered some of the other mechanics of New World so I’ve decided to focus on New World’s take on Economy and Settlements, which provide a familiar yet interesting take on traditional factions and reputation grinding.

The first thing you will soon find out in New World is that there are no NPC merchants.  Yes, that’s right, you will not be selling your junk to NPCs for gold as the economy is entirely player driven.  For the most part your leftover gear will be deconstructed for repair parts and materials, which you can use for crafting or selling at the Trading Post - New World’s version of an Auction House.  You may be wondering how you get gold to initially buy anything if you there are no NPC’s to sell to but the mundane quests of New World have you covered, rewarding fractions of gold for you to use.  I say fractions of gold because in New World there’s no silver and copper denominations of currency: you can literally have 10.2 gold pieces. 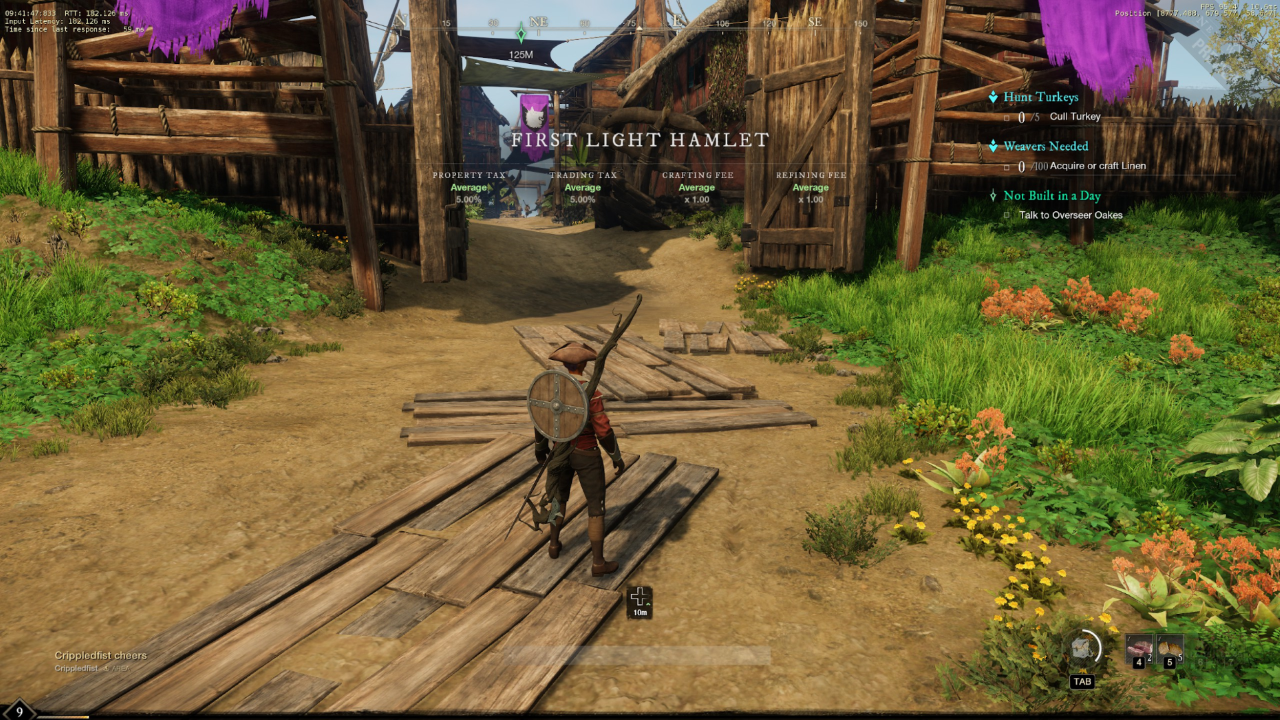 From my experience the player driven economy worked really well.  As far as I knew there were no dupes or exploits to be had that could disrupt the delicacy of a free market in its infancy and so there was plenty of competition, supply and price gouging going around to make buying what you wanted a cheap experience.  By level five or six I knew the hatchet was going to be a leveling weapon of choice and I hadn’t found one yet.  One trip to the Trading post, a few gold (and taxes) later and I was self-healing on kill (a hatchet passive) to my heart's content.

Taxes are everywhere in Amazon’s New World and they aren’t necessarily a fixed value.  Upon arriving in First Light Hamlet for the first time I was greeted with an overlay announcing the location, along with the current rates of Property Tax, Trading Tax, Crafting Fees and Refining Fees.  They were all considered average at 5%, 5%, 1x and 1x respectively and the exact amount you’d be paying was present when trading, crafting, etc.  This was my first introduction to the idea of settlements in New World and it only scratched the surface. 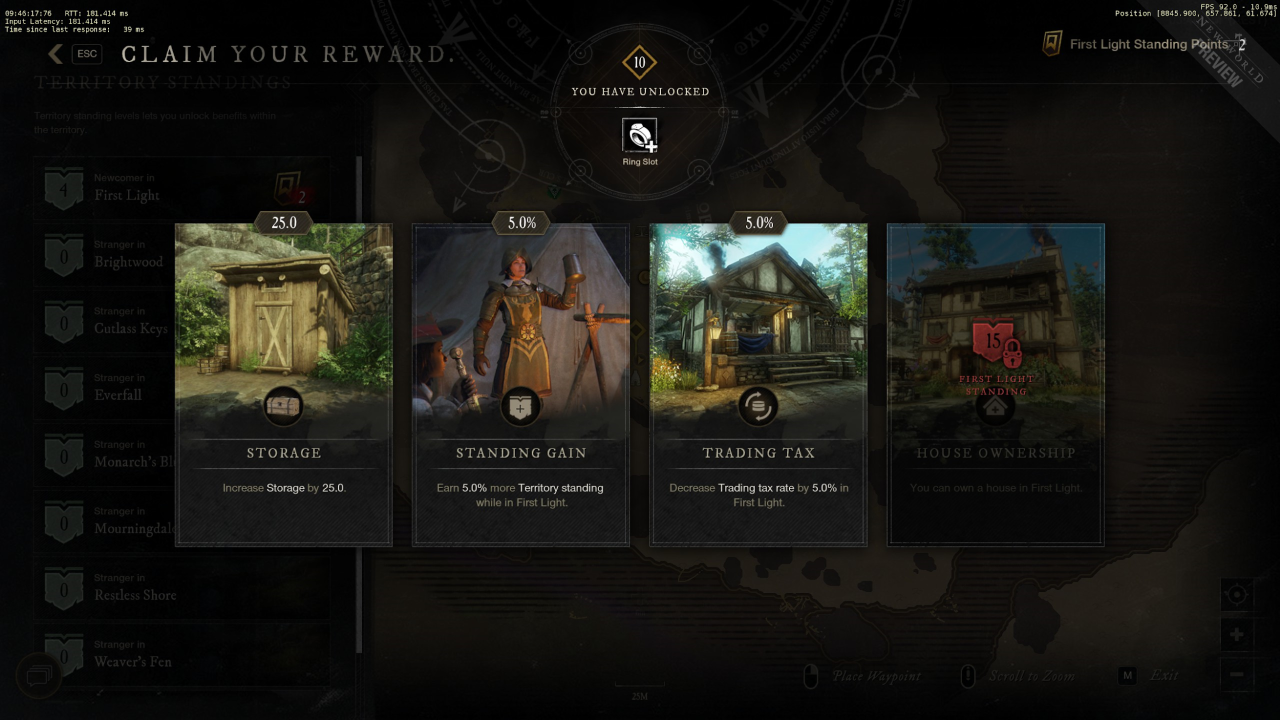 As you level up in New World you gain reputation with the settlement you’re questing in and each time you ‘level up’ in the settlement you unlock new passives such as increasing storage capacity (very important for end game) and decreases taxes and fees by a certain amount.  Gain a high enough standing in the area and you find yourself with the ability to purchase a home if that’s your fancy.  By the time the preview was over I had a settlement where I did most of my crafting because I was able to reduce taxes and fees and another where I stored a lot of my materials because my storage capacity was drastically increased there.

In addition to the passive unlocks there is also a town project board providing ways for players to contribute to upgrading the town.  The missions and upgrades that are available coincide with the territory planning that comes from faction controlling, mentioned later, and is a way for all players to contribute to crafting improved gear, potions, etc.  You’ll find activities such as hunting turkeys, acquiring and delivering iron ingots or leather, and searching areas for supplies.  These will contribute a progress bar towards upgrading crafting stations or items like explosives used in Wars. 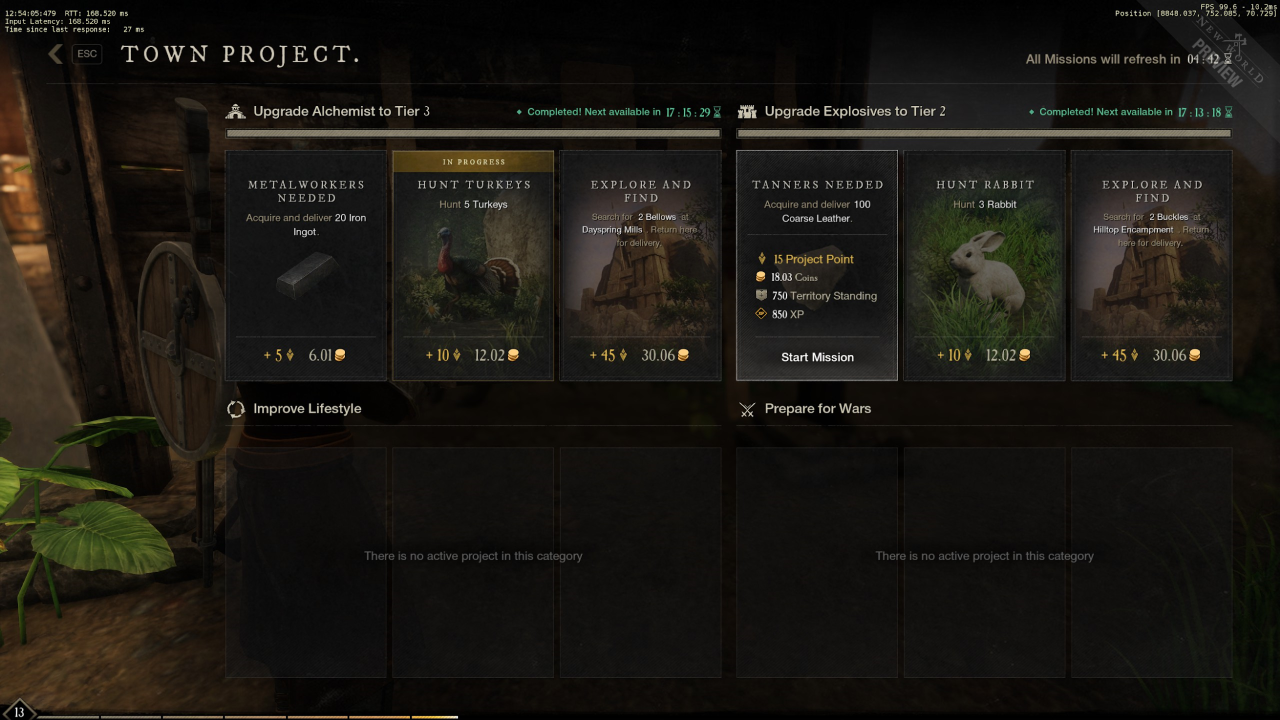 There’s a war for Control

Not all territories are created equal as far as taxes go, and not all territories will stay the same.  At a certain point in your question you will have to make a decision about which faction to join.  There are three, each with their different mission statements, and all of them are fighting for control of the various settlements and territories of New World.  Within these factions there are Companies (guilds) of up to 50 players that come with the ability to declare war on opposing companies and fight in epic sieges to take control of a territory.  Being part of the Company that controls an area, like First Light for example, gives that Company the ability to set tax rates and fees to earn themselves money, which if they’re good governors they will use to unlock higher tier crafting stations.  Only members of the controlling Company can decide where to allocate resources and in this way the territories throughout the world remain fluid and ever changing.  One day Everfall could be the premier crafting area and the next taken over and crippled to send players to Windsward.

In this way, at its core, New World establishes itself as a PvP centered game.  PvP is where you’ll find the most interesting quests, in my opinion, compared to the PvE quests that are quite literally the same thing over and over again with new scenery.  Defending or attacking in a Fort Siege feels epic, chaotic, and satisfying as well as the inherent danger of completing PvP quests to bolster your own faction or weaken others.  While the combat is still desperately in need of polish the PvP encounters were my favorite part of New World and with combat polishing will be the cream of the crop. 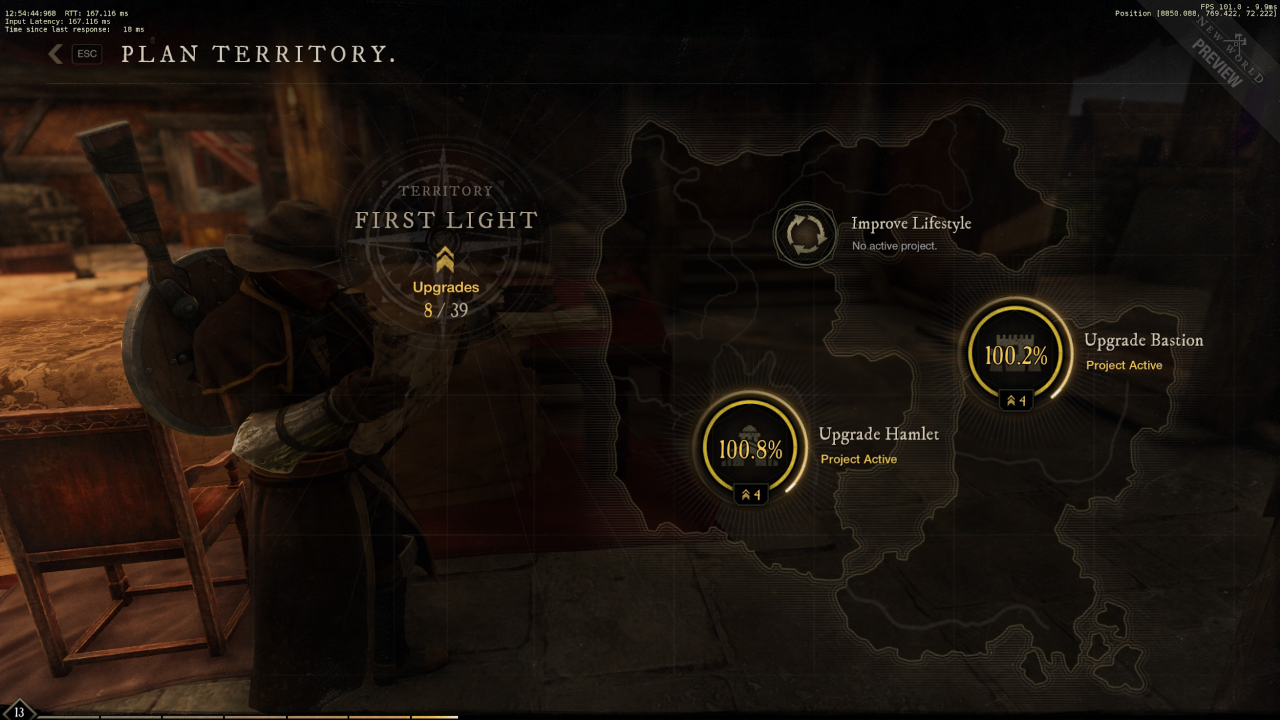 There’s a lot more to New World than just Settlements and Economy, so much so that we broke it up between multiple previewers. I urge you to check out our preview of waging war and our look at crafting to discover more about what New World has to offer.  There’s a lot going on and while much is in need of polish and revisiting the framework for an excellent game shines through.  As long as Amazon continues to listen to feedback and apply resources in the right areas we could be looking at an addition to the few steadily successful MMORPGs on the market today.