Aeternum, the Eternal Isle and setting for Amazon’s upcoming MMO New World, always looks interesting to me at first glance. An island populated by explorers of all cultures, all seeking the treasures and hidden secrets of what makes the land deathless, is something very alluring. Exploring New World’s new region Reekwater, however, gave the 17th Century setting a grittier sheen. Covered in swampland, overgrowth, and dotted with occasional ruins and shanty towns, Amazon Game Studios gave media a glimpse at the MMO’s endgame area earlier this week – and it left me still torn over what to think about the experience as a whole.

During August’s open testing, I enjoyed what I played during, mostly enjoying the world around me as I traveled around with my friends.  I mirrored many of the thoughts Matt shared in his video on our YouTube channel back in September. The MMO set in the waning years of the Golden Age of Exploration has interested me since it was announced, and then re-announced last year. I love stories set in the years of the explorers. The late-medieval, early Renaissance period of history brought so much color to the dark stories and tones of ages past. The isle of Aeternum is, at first glance, an intriguing settlement. It’s an isle where explorers across centuries from varying regions and cultures have all stumbled upon only to discover its dark secrets and harness the power of Azoth, the mysterious element that brings magic and more to the Eternal Isle.

In practice, however, much of the setting felt lost to me. It was this feeling that nagged me throughout the almost three hours I spent back in Aeternum again. 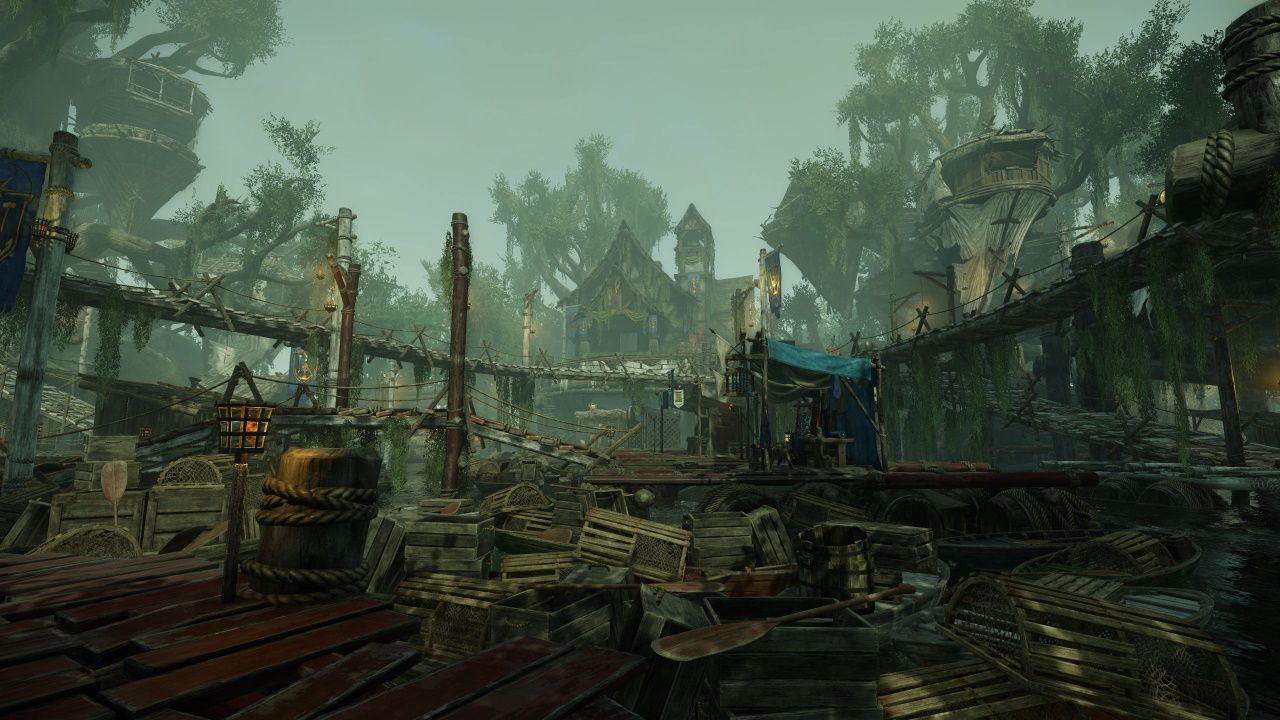 That’s not to say Reekwater itself isn’t interesting Far from it. The swampy, boggy, flooded region evokes the image of pirate shanty towns, with villages popping up on floating platforms in the bog. The main settlement, Reekwater proper, is a town both in the swamp and in the trees, much like the run-down boggy sister city of Caras Galadhon the Elves don’t tell anyone about.

Wandering the small flet platforms of Reekwater, you’ll see the inn, storage sheds, and crafting stations – staples of every New World settlement - all accompanied by the incredible tunes of a run-down blues harmonica. More games need to lean into prominently featuring a blues harp. Missing still are true vendors to whom players can sell and buy items such as ingredients or even health pots to help you combat the dangers of New World .

Upon exiting the settlement, you’re met with the untamed wilderness of Aeternum, its bounty guarded by enemies and nature alike.

Creature density feels amped up compared to the regions we tested in the Alpha back in August. That’s not to say that there weren’t plenty of creatures and enemies to stumble upon before to ruin your day, but this zone feels jam packed with Azoth-powered enemies, wolves, and even massive vine creatures that harass you to no end, whether you’re right next to them or a ways away.

In fact, leashing distance really bothered me in New World’s Reekwater test, especially in one ruin I was sent to in order to find some ancient tablets to bring back to an NPC in the settlement. I couldn’t move more than four paces before being assaulted by something – or somethings. Constantly being kept on your toes is nice in an MMO, but it definitely hampers the experience when the quest you’re sent to accomplish has you searching the area and you can’t stop for more than five seconds to actually look.

It almost feels like the team opted for density instead of creating challenging creatures and encounters in these quests themselves to drive up the difficulty in these areas.

Reekwater itself wasn’t the only new feature on display this round of testing. Indeed, I was happy to learn that spears were being given a go around this time. The weapon class was something I wanted when we tested in August. Having come off of using a spear in Assassin’s Creed Valhalla, I wanted to see how Amazon Game Studios implemented the weapon in New World.

The spear’s mastery tree feels a bit like the hatchet. One skill line aimed at brutal, up close melee attacks, while the other seems to specialize in ranged attacks. I chose to use a mix of both, so I slotted a skill which hurled the spear at my enemy, and two that dealt devastating attacks up close, including one that lunged my character forward to savagely bury the spear in my foe.

My issue with the spear itself isn’t so much with the skill tree, rather the regular light and heavy attacks with the weapon. Spears in real life can be fast and agile, capable of swift, precise strikes in the right hand. However, spears in New World felt as heavy as a Warhammer – slow, deliberate, and not nearly as devastating as that sluggishness might suggest.

After a few tries at some basic level 60 enemies (if you can call an enemy at level 60 basic), I found myself falling back on the weapons I used during the Alpha in August: Musket, Hatchet, Sword and Shield. I tried healing for a little while to very little success as none of the healing spells still didn’t feel  particularly impactful. It will take much more convincing that the spear is a dynamic weapon I should choose over the already impactful weapons in the MMO.

One major change to combat I liked was the fact that weapon skills are now on independent cooldowns. This means you can use skills on one weapon and change on the fly, giving you access to your bevy of skills on another. As a result, combat actually felt more fluid - at least going from Sword to Hatchet and back to sword, stringing together combos and skills one each one. I found finishing with the spear better than just outright trying to fight with it - but it's definitely a weapon I'd love to see sped up a bit more to give it more dexterity, especially given it's one of the major stats that affects the weapon's power.

Fishing was another new feature in this test. New World has a very survival game approach to its crafting and resource gathering which makes sense given its roots. You’ll chop down trees, raze bushes, mine stone and ore, hunt and catch fish. Many MMOs have fishing in them. I daresay it’s something I avoid in practically every game that includes it.

However, because fishing appears to serve an integral part of the crafting loop, , I’m more than willing to see if the sport I won’t participate in real life can draw my attention in-game.

You can fish in both freshwater and saltwater, with different types of bait to use depending on the fish type. There are over 40 different varieties of fish to capture, ranging in rarities from the humble pike and cod, to the rare and sought-after sea monsters.

As I quested with a friend participating in this test, we found the most scenic swamp river we could to test out the fishing, though beware of your surroundings. We were attacked not once but twice by massive alligators whilst attempting to catch our dinner. I have to say, I enjoyed it more than I thought. Fishing is a simple tension mini-game. First, a meter will pop up and you’ll cast your net based on how well you hit the sweet spot at the top. The distance will play a role in the depth and the type of fish you might catch.

Once your line is floating in the water, bait firmly affixed, New World introduces the tension mini-game. You’ll hold down your left mouse button to reel in your catch, but too much tension could break the fishing line. An indicator on screen will start to change colors from green to orange and red when it’s too tight, warning you to back off. Should you succeed, you’ll be rewarded with a fish.

Bait plays into the type of fish you might catch as different species are drawn to different baits. The normal bait I found brought me pike and salmon. However, using more upscale bait  saw myself capture a large sturgeon. Oh, if only the caviar inside were real and in my office right now! 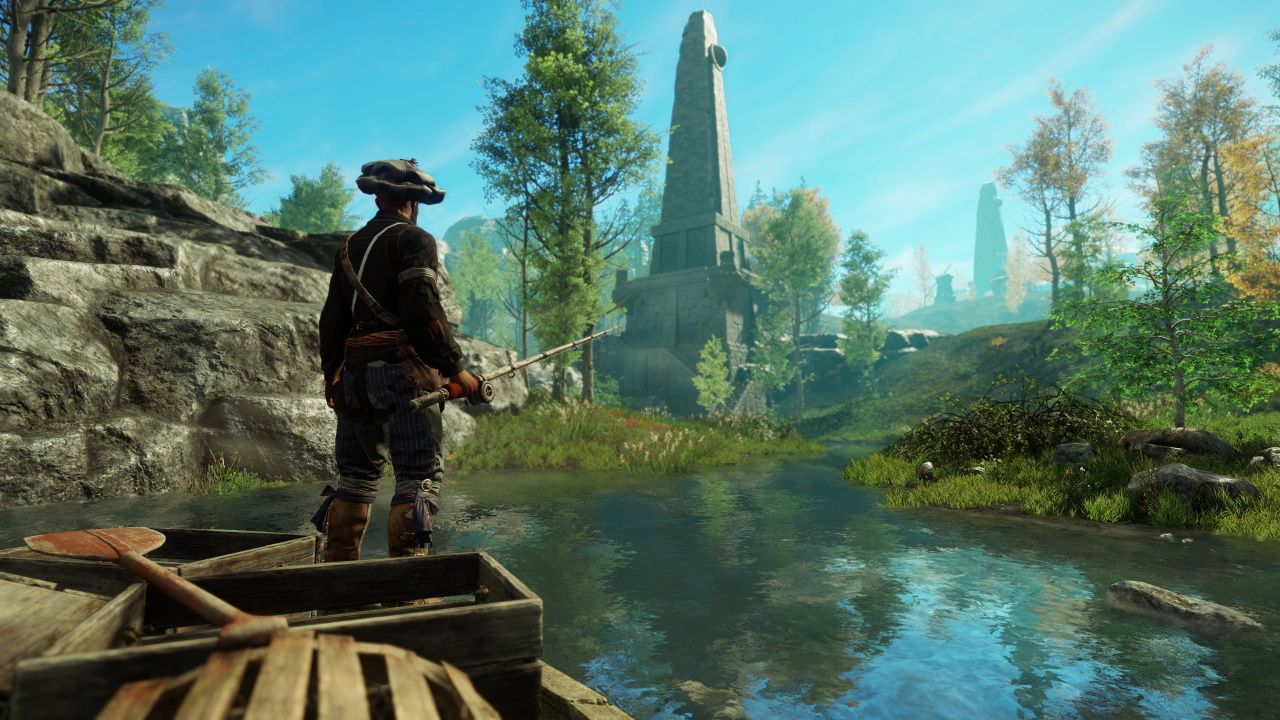 Fishing isn’t just a way to pass time, but New World’s crafting means it’s integral in getting ingredients for recipes which could help save your life when adventuring. As someone who loves cooking in both real life and games, that is something that I’m drawn to. I can see myself becoming a master fisherman to help my group of friends stay upright on our journeys across Aeternum.

When our time was done, I left New World with more questions than answers. Just what exactly is there for players to do that isn’t already in the experience? How exactly does the team at Amazon define “end-game content?” And just what is their plan and roadmap for the future of New World? That last question is something that is asked every time we meet up with the developers at Amazon Game Studios, and it’s something that we’re left wanting each time. In a media Discord where we met for the presentation to interact with the developers, the question was asked and we were told that they, “don’t have specific information to share about the roadmap towards release.”

Considering all the delays New World has experienced, originally supposed to have released in 2020 and now having been pushed back to Spring 2021, a roadmap and conveying a clear vision to their consumers would go a long way in assuaging fears surrounding the MMO’s community. This is especially so given Amazon’s track record in the gaming space as of late thanks to the launch, subsequent de-launch into beta, and then cancelation of Crucible.

It also leaves me wondering: beyond the crafting, combat, and quests that don’t feel like any different than the standard fetch and slayer quests MMO players have been experiencing for decades, what is there to actually do in New World? What is the endgame – literally?

While the team is still firmly ensconced in the alpha testing leading up to the Spring 2021 launch, it’s nice to see new areas and features being added and tested before the product officially goes live. Reekwater was a nice region to explore, and very visually different than the pirate coves and European-style fort settlements we saw in August. And, at the end of the day, the gameplay is still fun even with its faults on display. It’s fun to lay into an enemy with a savage hatchet strike, or score a headshot on your musket after playing dead. But how long that will last is the question that lingers every time I close New World.