Rushing an Outpost in New World’s…um..Outpost Rush PvPvE mode feels a bit chaotic. As myself and my team fought over an outpost in the middle of the map, all of a sudden a bear appeared out of nowhere, seeing the two sides sync up to fight off the unwelcome foe while still fighting each other. Finally, once the bear was defeated, our two sides were at it again – fighting over the stronghold that would give the winning team a commanding lead in the point total towards our goal of winning the Rush.

Outpost Rush combines control point gameplay seen in MMOs and even FPS games since time immemorial with a twist. Two teams of twenty players each fight over three outposts on the map, all the while to hold them those same players will need to gather resources such as wood, ore and the magical substance in New World, Azoth, to upgrade those same outposts in order to ward off attackers. It’s hectic, it’s got potential, and most importantly: it’s fun.

However, I feel like that fun might be contingent on the players you have around you during your Outpost Rush sessions. In our gameplay group, which was part of a preview session with journalists and New World’s game developers ahead of tomorrow’s Closed Beta test, we had a pretty balanced party. Healers kept our party upright when they could, while tanks rushed in and soaked up damage for players like myself sticking more to the DPS role. However, while we had coordinated well on team roles, we didn’t coordinate all that much in terms of the attacking and defending aspect – you know, core concepts in a mode all about attacking and defending outposts.

The other team jumped out to an early lead taking control of the closest outpost to their fort while sending part of their overall force to capture the middle outpost. We did the same on our end, though we lost the middle post early on, allowing the other team to start getting more and more points and pull ahead. Meanwhile I began to choose whether or not I was going to be a part of the party that deals with combat at the outposts themselves or go search for materials to upgrade what we did have to make it easier to push and hold our territory. 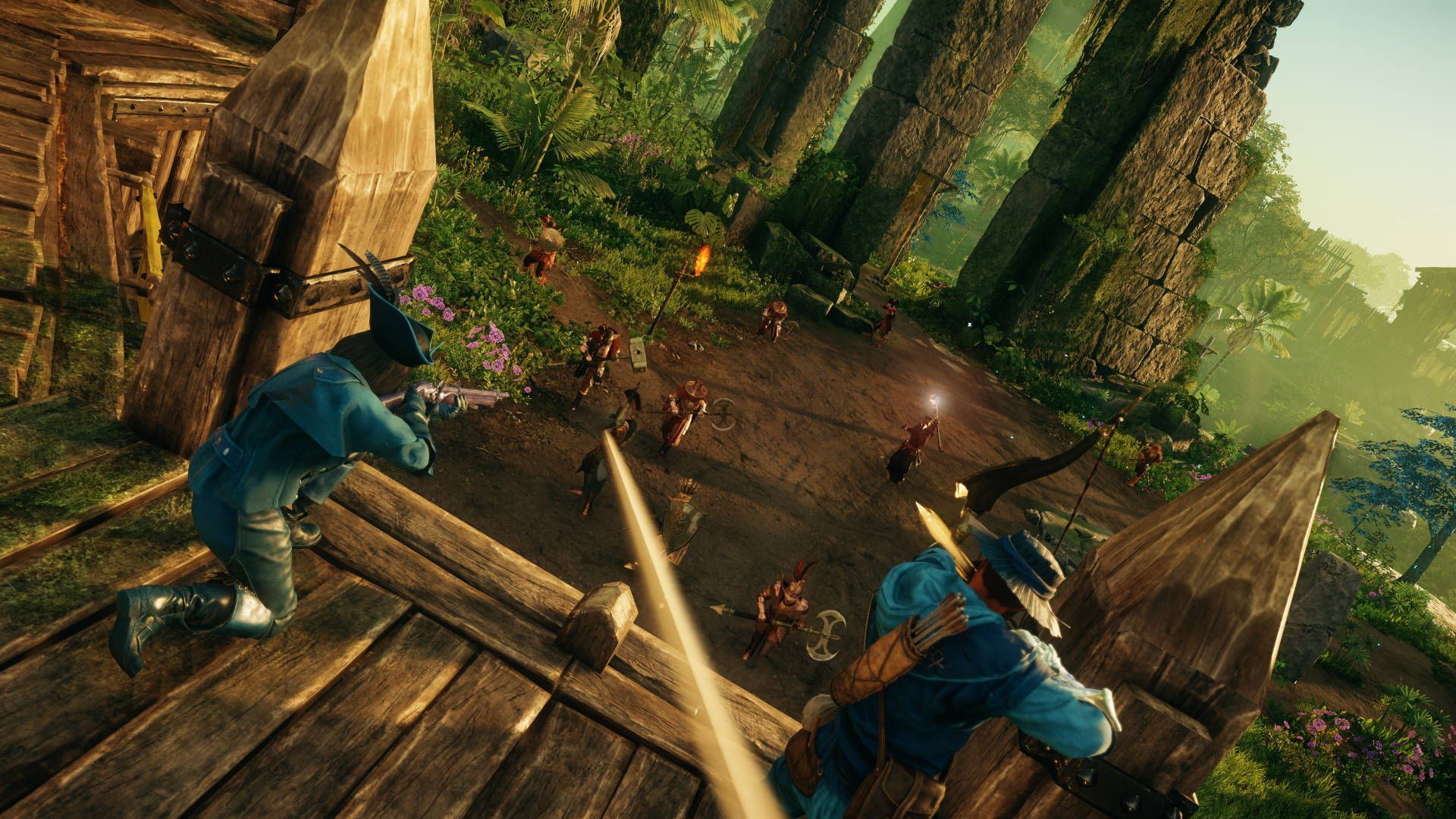 After about ten minutes of fighting over the middle outpost where our team just could not secure the prize, I broke off to try to find the mats needed to upgrade what we did have in case we were pushed all the way back to our only outpost. Materials range from wood from specialized trees or even the hides on some of the creatures you’ll find around the map, like the aforementioned rampaging bear. These materials are used to upgrade stations in your outpost, like a command center that gives your team buffs while fighting there or even by building large cannon or weaponry to make defending easier by raining fire down on attackers from your walls.

Roaming around the battlefield searing for supplies took the hectic nature of the mode and made it…well…pretty calming. Instead of worrying about being ganked or fighting off massive Warhammer wielding enemies, I instead focused on corrupted guarding ore or went on the prowl for wolves to take their skins for my own. I found myself enjoying this aspect a little bit more initially – I mean, I wasn’t dying as frequently and I felt like I was really helping my team by doing so. However, it became clear I was the only one actually actively trying to upgrade, and while that isn’t necessarily a bad thing since we really needed to take the middle outpost to have any chance at winning, I did feel as though as a result my efforts were wasted. In the end, it seemed I could better help my team by joining the scrum myself.

So I did – and brought along another bear to cause some havoc among our enemies. In this instance we took the center outpost, though we only held it for a short while before it was taken from us again. A few short minutes later the match was over, with the other team reaching the 1000 point total first (conversely, we didn’t do too terribly, hitting just under 900 ourselves).

It is an interesting take on a PvP mode that can sometimes just feel like you’re running a loop: Capture A, rotate to B, back to A, then go take C, and so on. By seeing players not just fight over the outposts themselves, but – at least in theory – the resources on the map to make those outposts more defensible, Outpost Rush has the potential to be a rather fun and interesting take on the capture and hold game mode.

However, I do wonder whether or not the strategies players will employ long term will involve even the PvE aspect of the mode, or if it’ll just be easier and more viable to simply…well…rush the outposts with the full might of a 20-person team. This way sheer numbers can overwhelm the enemy, even if they are spending the time and players to hunt down materials that, in the end, might not provide enough advantage if your team has been down two outposts to one in the meantime.

In addition to Outpost Rush, we got the chance to check out another of New World’s expeditions, the Lazarus Instrumentality. Like our previous coverage of the expeditions in New World, which are effectively the MMO’s version of instanced group dungeons. I really enjoyed what I played in the Amrine Excavation, though we didn’t get the chance to finish the dungeon as we were only three in a five-person dungeon. 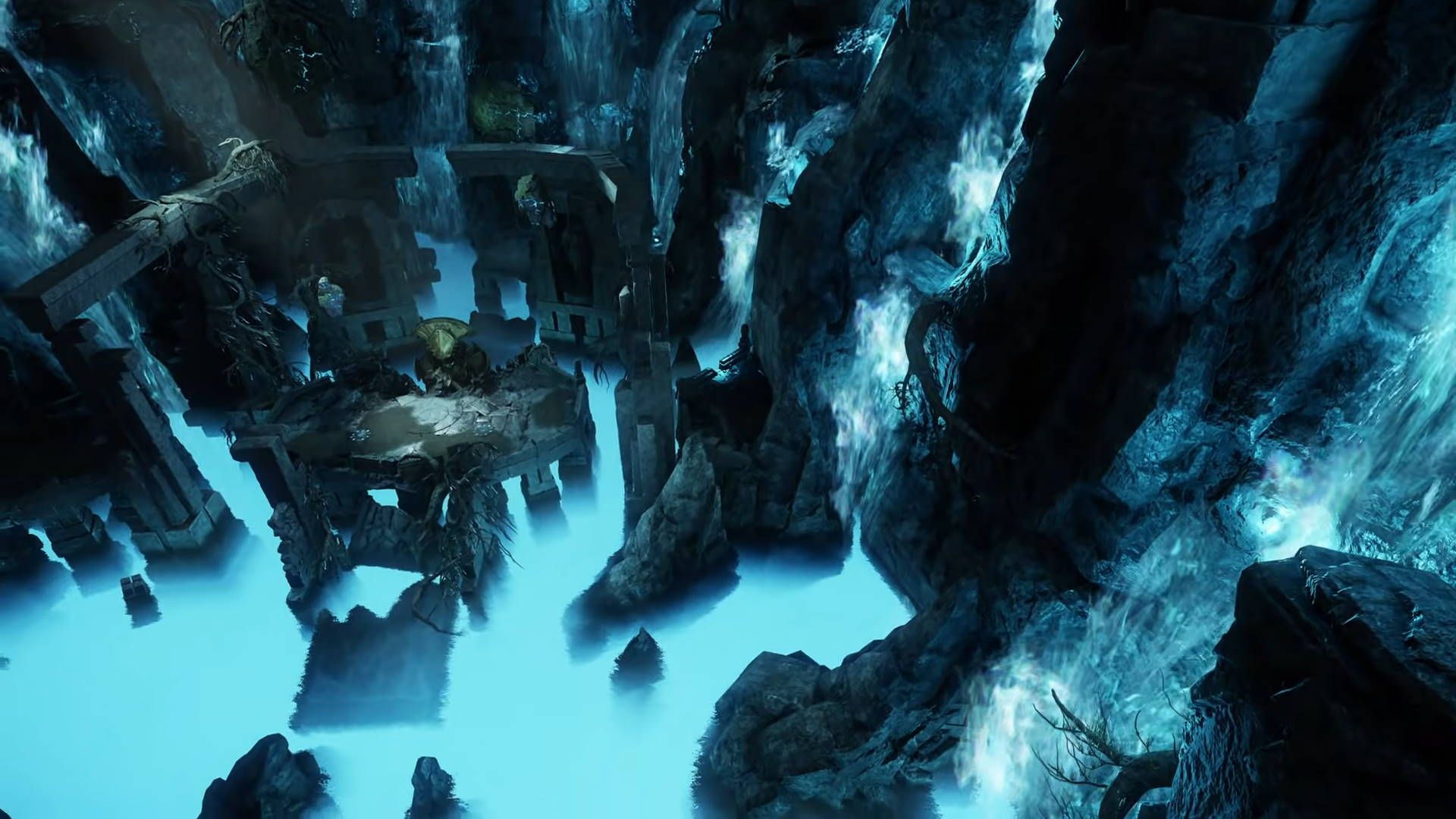 The Lazarus Instrumentality didn’t fare much better, but to be fair it is more of an end-game dungeon overall. We had a pretty balanced team – one of the developers in our session played the tank while the other healed, leaving myself and the other two critics to shore up the DPS roles of the group. While New World is class-less, instead using the weapon, armor and your stats to help dictate the type of role you’re playing. I found myself leaning into DPS with the Rapier, which is likely the weapon I’ll be using mostly in New World I’ve discovered, as well as boosting my Focus stat to help with a bit of off-healing.

We moved through each monster encounter, dealing with waves and waves of what looked like undead creatures, the beautiful subterranean ruin around us was a show stealer. I really have enjoyed the art design of New World to this point, and the direction inside the dungeon did not disappoint. The Lazarus Instrumentality was full of ancient ruins, columns that seemed to be lit with Azoth flanking the pathways myself and my party-mates traversed. The aged Reavers and other fell creatures we encountered looked like they had been trapped there for centuries, protecting whatever slept at the heart of the dungeon.

One of my major gripes in New World has that combat has felt a bit floaty. However, in this instance each stab and flurry of my rapier felt solid, and thankfully it seemed as though the cooldowns on the skills themselves were shortened, meaning that I was able to rotate through them a bit more like I would in a traditional MMO versus tests past. It felt like a solid balance between dodging, striking, and then activating a powerful skill to deal quick, successive strikes or slash across a group of enemies, dealing damage and applying a bleed effect to the lot of them.

Moving through the ruin, it became clear as we came upon a boss that we would need some additional healing, so I started to toy with the Life Staff a bit. I really wish healing in New World wasn’t projectile based. It feels imprecise, and oftentimes I’m not sure I’m actually doing anything. Dropping an AOE heal can also feel a bit imprecise, especially if you’re not coordinating, as combat may force whomever you’re trying to heal out of the AOE’s range. There is also a targeted heal that I never could quite get the hang of cycling through targets. The skill will light up who you’re trying to heal and you cycle through targets using the mouse wheel – however I never felt like it would solidly target who I wanted it to or who my reticle was initially pointing at. It all feels imprecise, which as a healer that’s the last thing I want.

The boss we came across about 40 minutes into our dungeon run was pretty difficult as well. The boss. Cilla, was a Naga-esque creature that threw a massive javelin at us – or simply lunging at you with the weapon if you’re not careful. The boss was strong too – even at level 60 with high level gear two hits was all it took to get through my medium armor. This felt like where the hours of practice you’d have juggling the skill-based combat of New World would come in handy, not just a round of Outpost Rush before you tackle one of the hardest dungeons in the MMO. I felt powerful every time I sidestepped a thrown javelin, as well as downright useless when I couldn’t time it properly later on in the fight.

Either way, The Lazarus Instrumentality further cemented what I felt coming out of the Amrine Excavation: this is where New World for me shines. Amazon’s MMO finally feels like an MMO in these moments. Working together, learning boss mechanics, ensuring that your team is well balanced and coordinated, and then making sure everyone plays their role when the going gets tough – New World feels like an old-school MMO in these moments.

Now whether the grind to get there will is the question. And one that will be put to the test starting on the 20th when New World’s closed beta opens up ahead of its late August launch. One thing is certain, though: New World does have potential, and I’m excited to see where it goes from here.