New World's closed beta has been in full swing since July 20th, and tens of thousands of players have landed in Aeternum waging war, skinning turkeys and more. However, as I look back on my more than 30 hours since the beta began in Aeternum, there is one spot where I'm not completely sure the MMO has improved much since its last major public beta: questing.

Questing in New World has sort of been a mixed bag. The vast majority of tasks you'll do in Aeternum involve a few key elements to the gameplay. You'll either be running quests for the town board, improving the settlement for the company currently governing it, or maybe you're trying to build your own faction's influence in the region so you're embarking on tasks for them as well. Or, if you're trying to learn more about Aeternum itself, you're running the main storyline which the MMO presents to you pretty early on.

The key thing to remember is that many of the quests don't really seem to drive the narrative, which is one reason why I mainly call them tasks when referring to them. I'm running tasks for my faction, or I'm completing a task to help improve the kitchen in Everfall. The major issue with these is pretty simple: variety.

Tasks in New World fall in two main categories: slayer or gathering quests. Now this isn't really unique to New World, these are the mainstay quests in most MMOs for that matter. However, one major issue facing New World is that these tasks are, sometimes, pretty much identical. You'll got to this farm and search through eight crates or chests for some reason. Or you'll venture to this cave and kill 7 wolves. Rinse and repeat, oftentimes too in the same locations. 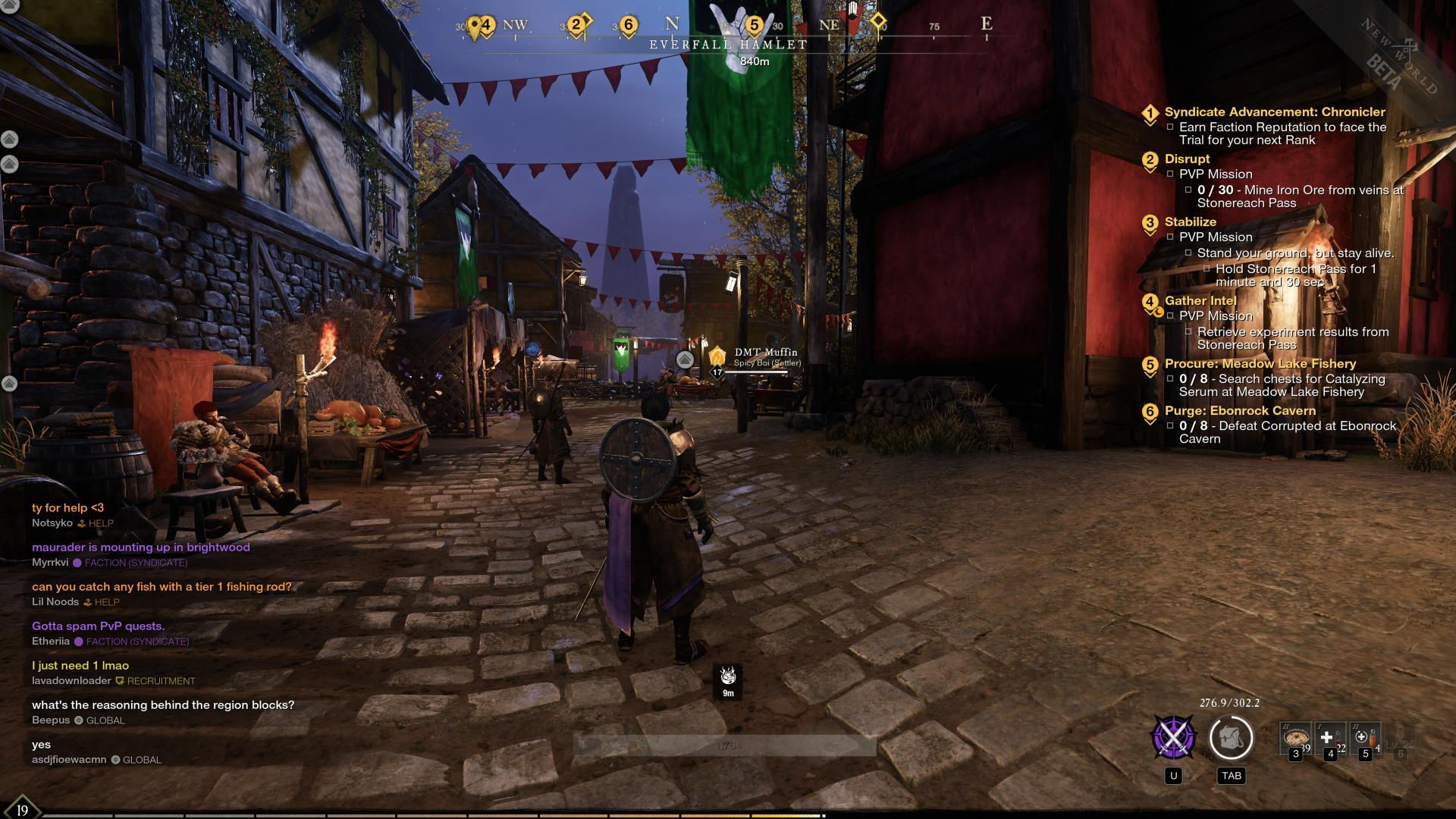 PvP quests feel even more identical, as one afternoon I received the same exact task at least five times in a row before something different came about.

Because of this, it makes venturing forth and doing these tasks mundane and boring after a while. It also doesn’t feel like I’m learning anything about the world around me in New World, instead I’m just doing chores.

It does have the benefit of making you feel like you’re contributing to the settlement or your faction, especially with the PvP quests your faction rep can give you. You can visibly see influence increase, or help improve the settlement you’ve come to call your own through these tasks. I really just wish there was more to them. Like, anything more. At all.

The main quest isn’t much better, unfortunately, and it’s hamstrung by the sheer amount of people all vying for the same thing too. Fighting over boss or mob spawns is nothing new in an MMO either, however the bottlenecks created at some areas have caused questing through the main story to bog down. I spent a good 25 minutes trying to kill three tentacles as part of my journey to get my Azoth Staff because the spawns took so long to happen and then the mobs were burned down before I could get to them. It was a frustrating afternoon, made more frustrating when it was only one part of the quest and I would be fighting over another slayer aspect moments later.

The quests themselves do tell you a bit more about the world around you - though in the end the quest variety here also feels lacking. You’ll go search a cache in a cave to get the haft of your Azoth staff, or you’ll battle enemies on a bridge in the region of First Light. It does send you all over the map of Aeternum, which is nice, though it is quite a bit of walking if you haven’t made it to that settlement just yet.

This isn’t to say I’m not enjoying my time in New World, I actually am. The world is interesting to explore, and I want to see more of it as I go about my business. I like the struggle my server has had over regions like Monarch’s Bluff and Everfall - it adds a sense of community when you and your faction members are all fighting for a common goal. The crafting loop is incredibly satisfying and I find myself going off the beaten path more so than I normally would for that patch of hyssop or an iron ore vein. I just wish the tasks and quests I need to continue to progress wouldn’t bore me to tears.

Here’s to hoping the later zones can fill that void.