Last week I had the opportunity to get a little hands-on with Neverwinter’s new Bard class in the upcoming Jewel of the North module. I was joined by Randy Mosiondz, Lead Designer on Neverwinter. This update not only sees the first new class added since Paladin back in 2016, but also will squish levels from the current max of 80 down to 20. Here’s what I learned during my time playing Jewel of the North.

I first played through the revamped beginning for new characters. Although they called it a revamp during my play session, it largely remains the same. Minor improvements can be seen if you really look for them - such as the sky file being updated to be an actual sky instead of murky, smokey clouds, and new arcane symbols glowing beneath the warlock Makos’s feet as he binds the dracolich - which do give the world of Neverwinter a bit more depth and immersion at first impression.

The original beginning had players progress through level 5, learning a new skill after each level-up in order to slowly acquaint players to the starting skills. In Jewel of the North, these skills are available right from the get-go. Since the levels are being squished down, players will acquire new powers and abilities at a faster rate as well. The only other change I noticed during this beginning was in the tutorial having players practice their moves on a training dummy before actually introducing the combat. I do wish that Neverwinter would have a completely new tutorial sometime, as I feel like I’ve played through its beginning at least two dozen times (I like to make new characters, what can I say?) 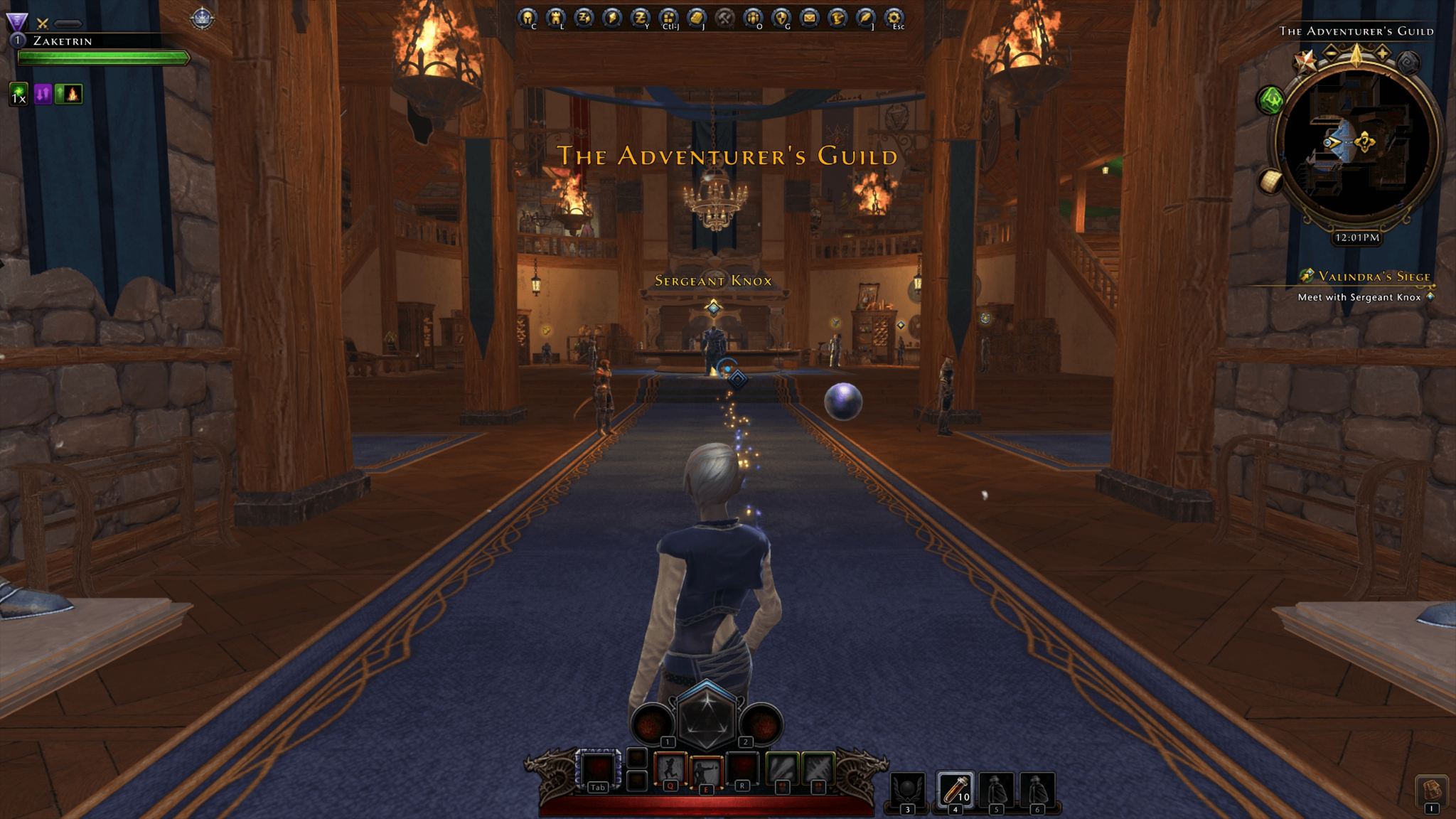 Although this tutorial mission was mostly preserved, the starting missions in town have been significantly altered. Now, instead of talking to Sergeant Knox out in the city and being sent to fight Nasher rebels in Blacklake District, you are now introduced to him in the Adventurer’s Guild. This new Adventurer’s Guild takes the space of what used to be the Trade of Blades building. Inside, you’ll speak with Knox to go through the rigamarole in acquiring your mount, learning combat in the new training room, and getting started tackling the six leveling zones that compose Neverwinter’s new early level progression.

This new, streamlined story arc is where players will experience levels 1-20 before getting thrown into the Epic Adventures. Speaking with Randy, “[Levels] 1-20 takes you through a series of six zones for the 1-20 progression, and doesn’t include any campaign zones… We streamlined the leveling zones and pushed all the campaign content to 20+.” Before, these leveling zones were mixed in with the campaigns and adventures, but they wanted to tabulate this content and differentiate between just leveling up and the actual campaigns and adventures. 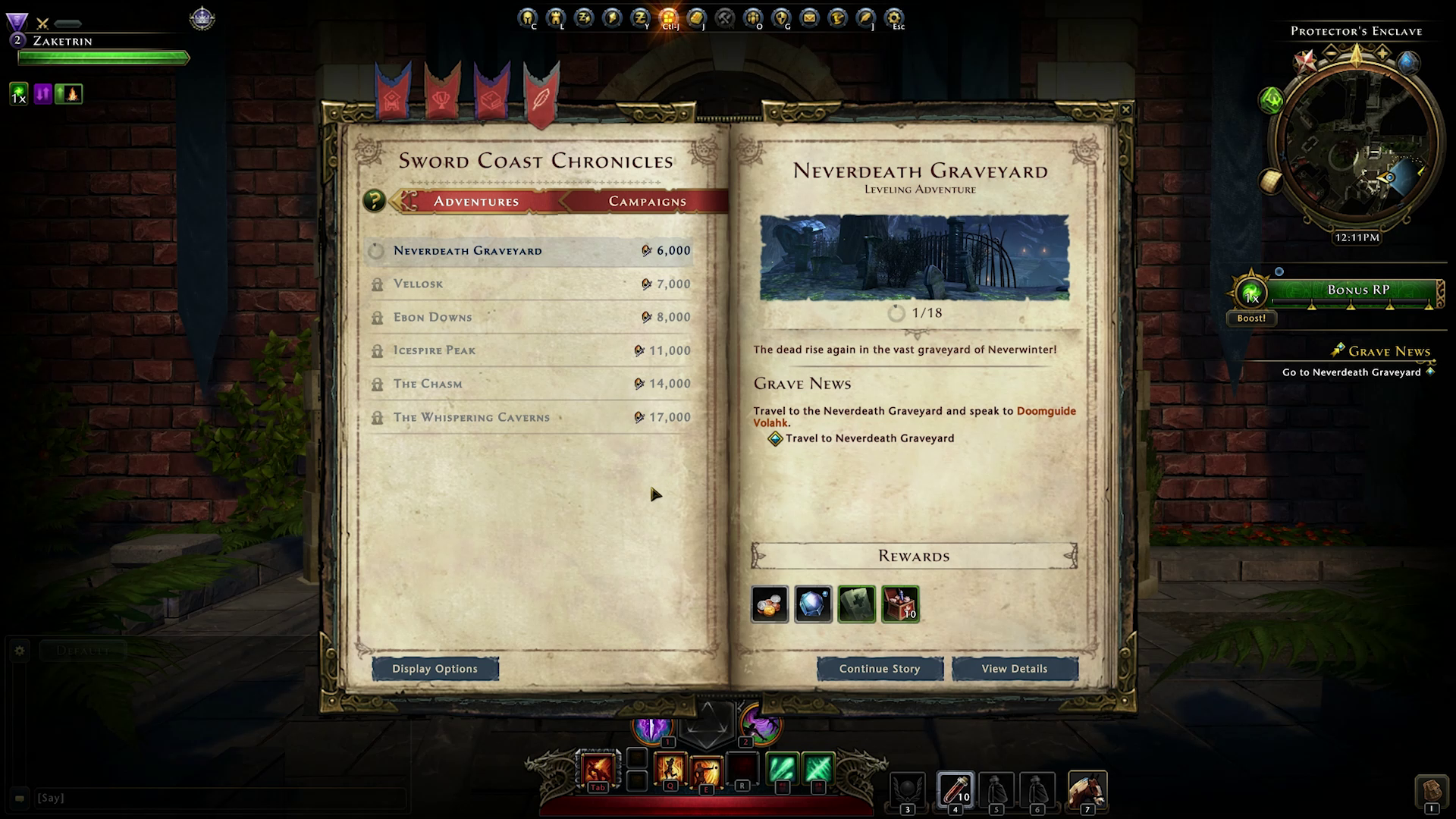 Leveling up works differently as well, “We’ve switched from a ‘you kill a monster and get xp’ to ‘you’ve completed a story arc and you get a level progression increase’.” This feels like it plays out more closely to a D&D campaign than your standard MMORPG leveling progression. This change matches Neverwinter thematically, and overall seems like an improvement to how players will experience the content as opposed to grinding through endless mobs just to level up.

While some older adventures have been vaulted, most of the content has been reserved for the level 20 Epic progression. Getting to 20 will be faster too. Speaking to Randy about how long it takes to hit the newly squished level cap, he said “We’ve gone from 30-40 hours to about 10-12 hours of gameplay in order to get to Epic level content.” This removes the barrier of entry for new players and will hopefully bring in more players that can prolong Neverwinter’s life. “We wanted to remove that wall for new players coming in that want to try it, or even for existing players that just want to try out the classes without spending another 30-40 hours in order to get another character to Epic level content.” “We wanted to make that easier and make it more accessible for players,”

I had a chance to try out some of this Epic content for myself while playing as the new Bard class. I started the quest to explore Valdemar’s Lair outside of Wyllowwood as part of the Undermountain Campaign. I entered a cave and fought mushroom people, or Myconids, and found a magical talking sword named Tearulai. The Bard build I played felt more like a rogue or swashbuckler type class than what I would typically associate with. I was playing as a Songblade paragon class, which specializes more in DPS. The Minstrel is the Bard’s other paragon class and acts more as a ranged healer and support class. 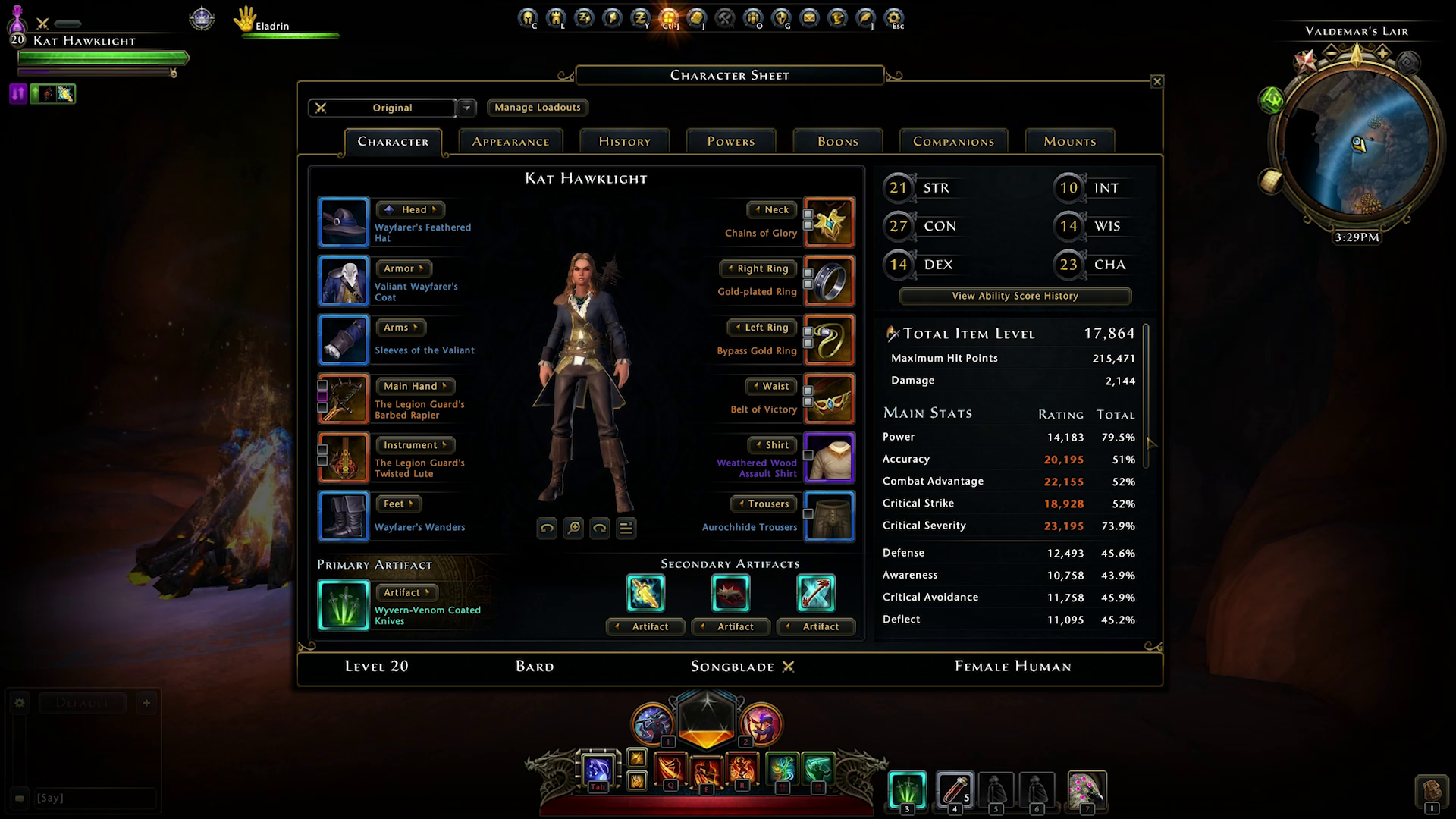 The Songblade Bard has both ranged and melee attacks, although I focused more on the in-your-face abilities while I played. The standard melee at-will attack Staccato is a multi-hit attack whereas the alternate at-will attack, Con Elemento, deals fire damage to all enemies nearby. The encounter abilities included Duet, which deals Area-of-Effect damage centered around the player and stuns, Volti Subito, a rush attack that can close the distance between enemies, and Ad Libitum, which deals high single-target physical damage with a 50% chance to immediately use again.

These abilities made the Bard feel very fast-paced, and I maneuvered around the Myconid mushroom people and Kobold enemies with ease while launching attacks from all sides. But it wouldn’t be a Bard without some magical songs to play. The Bard’s mechanic ability is Perform, which pulls out the lute and lets you press number keys to play a song for either attack or support abilities. Playing the Lute reminds me of Ocarina of Time - there is a certain order to playing the notes, but thankfully the songs are pinned right beside the strings at the bottom of the screen for easy reference. 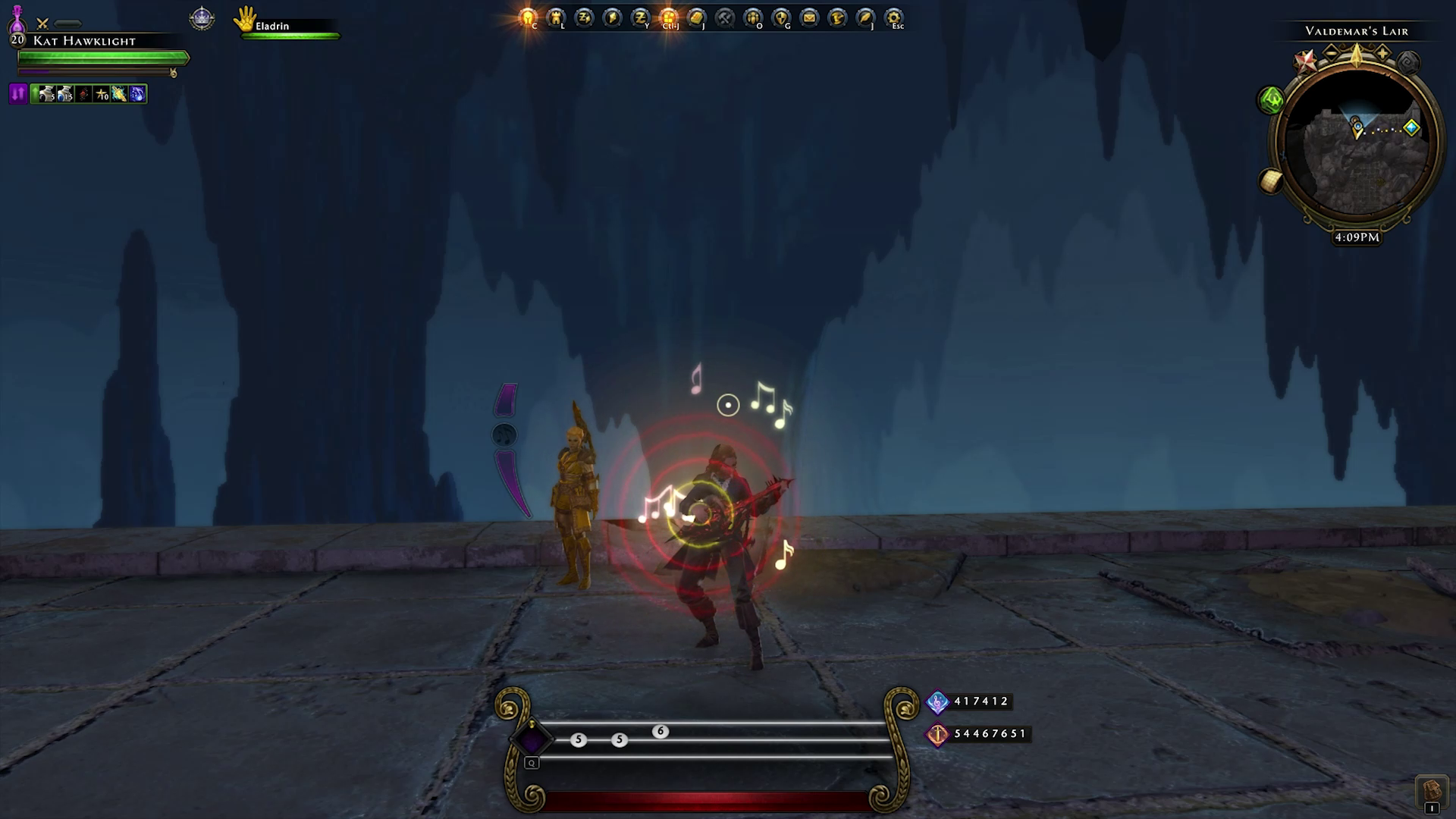 Most songs seemed to deal damage, either in an AoE radius or in a line, but I did have one ability that could heal. Additionally, a song can be slotted for quickplay which circumvents the need to actually play the lute. This is great for either complex songs that you just don’t want to deal with playing, or for your most commonly-used ability so you can get it off quickly. In my play session, I had the song Ballad of the Hero in the quickslot, which causes all of the abilities to deal additional damage. Unfortunately, during my time with the Bard the number pad did not work for playing the lute so I struggled to press the top row of numbers to get songs off quickly. Afterwards, I was able to go into the keybind settings and register the number pad for the 1-8 keys. Hopefully, this will just be set by default when the Bard launches later this month.

My last vestiges of time spent with the Bard were in the Free Perform mode. This mode, much like it sounds, lets you freely perform any songs you want on your lute. You could practice playing certain attack songs while not in combat, or - if you’re like me - you can start playing the Main Theme from Star Wars. Octaves are handled by holding down either the left or right arrow keys while strumming, and accidentals can be played by holding the up arrow for sharps or down arrow for flats. I imagine that there will be quite a few potato bands holding performances in the city soon after Jewel of the North launches next week. Eventually, maybe you’ll even encounter someone who’s good at playing in-game?

Neverwinter’s new Jewel in the North module launches on PC next week on July 27, and on PlayStation 4 and Xbox One in Fall 2021. Recently, Mitch revisited Neverwinter to include in the MMO ReRoll Rankings and Sharander Episode 3 launched just last month for PC. Are you going to revisit Neverwinter as well now that progression has been simplified? Or maybe just to try out the new Bard class? Maybe you’ll see me around in-town, playing ‘Song of Storms’ badly.