When I volunteered to cover this title, I was initially drawn in by the screenshots of the game’s artwork and illustrations I had seen on the game’s Steam page. Mist Legacy is a free-to-play (F2P) online multiplayer game with many traits you’d expect from a typical MMO.

Mist Legacy was handcrafted by a small team of developers at Virtys Studios and the team have taken a different perspective on this fantasy MMO, literally. The game features a 2D, top-down world, where live player characters move around like pawns from a board game like Sorry. 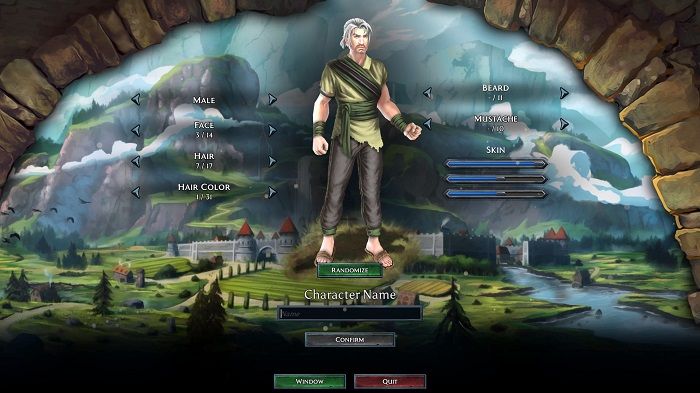 At first, I was a bit worried I might not enjoy what I had signed myself up. Initially as I was going through the character creation process, I felt it to be relatively meager, by today’s MMO standards anyways. I was becoming worried as a paper doll avatar was limited to face, hair, skin, and facial hair aspects. I became more worried upon finding my usual standard pick of a “male ponytail” hair style was not an available choice in Mist Legacy. When all was said and done, my weathered, male adventurer wearing sandals seemed to come out looking a bit like a cardboard cutout on screen. But as I plunged myself into the very RPG-ish gameplay and detail of Mist Legacy I was pleasantly surprised and here’s why. 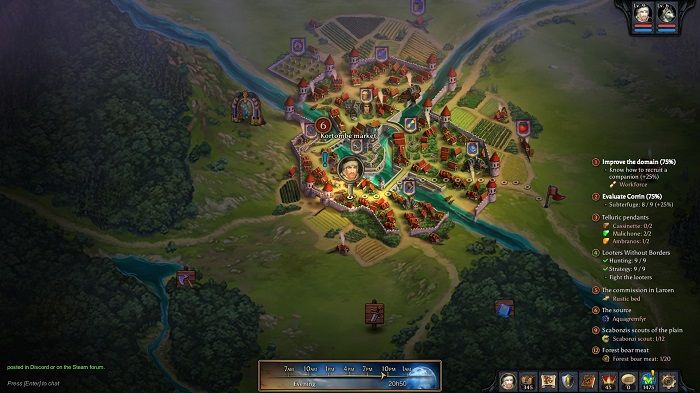 Movement in the world is from a top-down perspective

Most of the time you’ll be playing Mist Legacy from a top-down perspective as you explore the world of Myriaden. A world shrouded by Mist, a barrier that has restricted your people from looking past your own borders. You’ve been trained as a Mistwalker bound to duty to explore the Mist. Nothing earth-shattering story-wise I assure you. But you’ll use “click to move” to get your avatar around from place to place in this world.

You’ll also see other player’s avatars moving around as well but you can’t interact with them. There are in-game chat tabs for general chat, group chat and combat messages. You can group with other players but there are no modern-day conveniences here like “looking for group” queues, etc. Grouping seemed to be most popular for completing daily quests and daily boss mobs.

While “moving heads” isn’t the same as seeing other character models running around it’s still enough to remind you there are live players here. The chat seems to be relatively active, and players appear to be non-toxic and helpful, thus far.

Some areas are not readily accessible via an “as the crow flies” straight line. There is another reason some areas aren’t accessible but more on that later. Sometimes the game needs to figure out the best path, i.e., a dotted line, to get you from point “A” to point “B”. For longer distances you have stamina which can be used to “run” for awhile by holding down the shift key. I tended to make my moves in shorter distances. Why? Because as you move around the game world you potentially uncover points of interest, e.g., gathering nodes, exploration nodes, enemies to partake in combat, etc. These points of interest “unveil” as you near them in proximity making exploration fun.

As you explore, signs with question mark icons will also pop-up as markers and can then be treated as landing spots for quests, gathering, sleeping, etc. Quests present themselves as the typical yellow and blue, for dailies, exclamation icons. Numbers inside of circles on the maps indicate where a quest was accepted.

One of my complaints on this overview map screen is that it’s not zoomable and cannot be panned. So, if a quest marker is off screen, you can’t see it in your current field of vision. Thankfully, selecting the “M” key brings up a less detailed world map which can be panned to see where all your quests are. The world map is also helpful as it has several overlays. For example, the “hunting” overly shows you what hunting nodes you’ve uncovered on the complete map.

The game also works within the boundaries of a day/night cycle. The overview map screen will darken as the world clock approaches midnight. Darkness effects shops and NPCs and changes what mobs you might run into in a wooded area. An example is running into a bandit and monstrous spiders. There are some quests that require you to hunt at night but for the most part I found myself resting at an inn to advance the world clock to the next morning.

The Depth of The Skills System 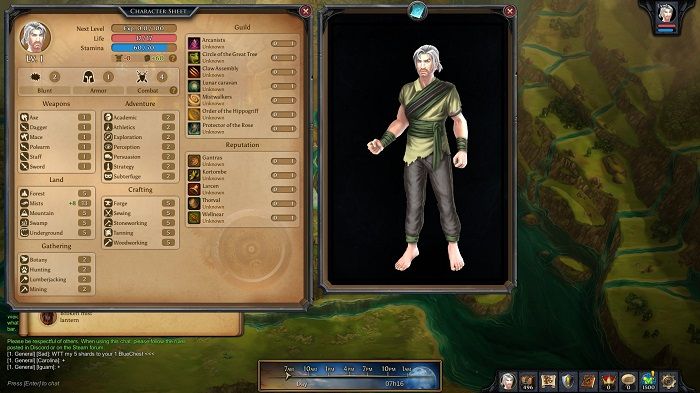 Many skills to master

Mist Legacy is a “classless” game and sits on top of a heavily skill-based progression system. You still need to earn combat experience to level your character. But this also means your character evolves and grows based on the skills you use. This loosely translates into the weapons, tools, etc. you equip. But the skill system doesn’t end there.

Skills are broken down into five categories and then on top of that you have the typical faction reputations to maintain and earn. Skills level up by using specific weapons or gathering tools or just by chopping down trees. Character trait skills level up mostly by partaking in skills-based quests.

Earlier I had mentioned that some areas are not readily accessible on the overview map other than via a straight line. Sometimes you’re gated from entering an area, for example a wooded section, until a given skill is high enough. 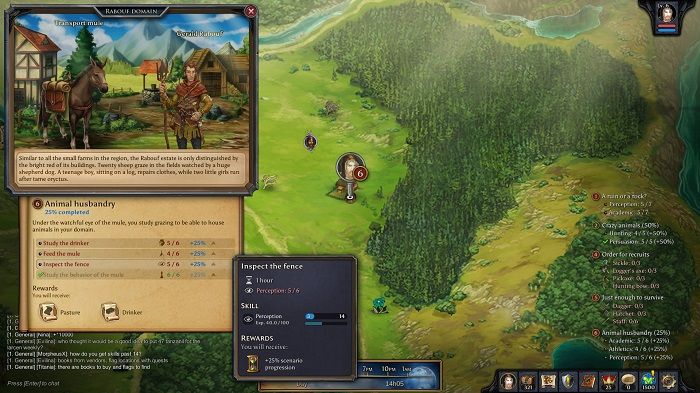 A lot of the land and adventure skills are leveled up by skills-based quests or taking part in gathering and/or crafting. Skills quests sometimes have several steps to level up several skills and some quests act as multiple-choice quests where you decide how to respond or based on which skill, you’d like extra experience for.

Most of the gathering nodes and skills quests are repeatable after a certain amount of time, e.g., a few hours. Once a “node” is uncovered you’ll be able to see it on the overview map every time you’re near it. Thankfully, clicking on things like a gathering node icon moves your character to that node and starts the one-click gathering process. The same is true of mob encounters.

One complaint I have concerning the skills system is that sometimes you’re forced to level a skill to progress a needed quest. The one that comes to mind is the quest to teach you how to use companions. One of the skills needed at a certain level is “subterfuge”. Subterfuge refers to a skill where “deceit is used in order to achieve one's goal”. This is typically a roleplaying style or trait I would typically never force my characters to portray, me being the age-old Boy Scout. Well, here in Mist Legacy sometimes it’s a necessity.

Sometimes the act of leveling up required skill requirements, or gathering the necessary materials, can start feeling like a chore or treadmill. Thankfully, those moments didn’t last long for me, and I always felt motivated to push ahead to uncover more portions of the overview map.

Combat In a Mist-ical World 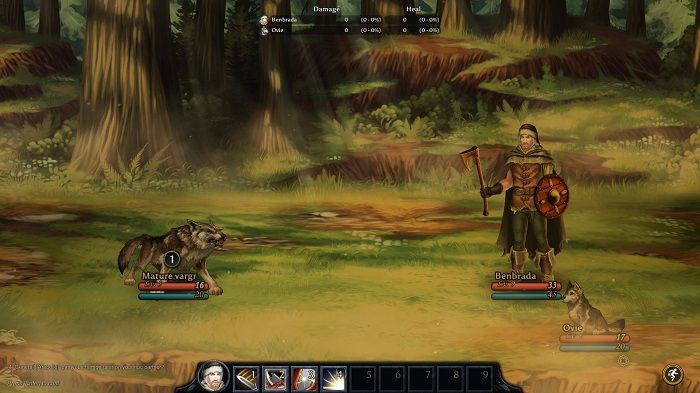 I purposely left the discussion of Mist Legacy’s combat until the end. It being turn-based I feared would scare some readers off. This might turn off some people but it’s an aspect I tend to enjoy.

There is of course level based PvE combat to help level your character. During combat each character associated with the player has a set of talents assigned to the number keys. Most talents are click a number and then use your mouse reticle to target a mob to hit. Talents open automatically based on skill levels. Once opened, talents themselves also level. In Mist Legacy there is no typical “talent tree”.

Most “encounters” in Mist Legacy are by choice. There are times of the day and areas where you’re thrown into a battle. There is a flee option, which doesn’t always allow escape, but it’s a choice, nevertheless. Fleeing is helpful in some cases as you never know how many mobs are in an encounter until you start it. If you fall in battle you lose any new items collected into a treasure chest which is dropped at your current spot until you can retrieve them after you’re resurrected.

Additionally, there are five PvP battlegrounds that yield weekly “blue crowns” which is the microtransaction shop-based currency. I did not get a chance to take part in this.

Further in the game you can hire or enlist companions. A full solo party can consist of a maximum of five companions, but it will cost you. Expanding your companion group slots past three is considered a microtransaction purchased with blue crowns.

Your Home Away from Home 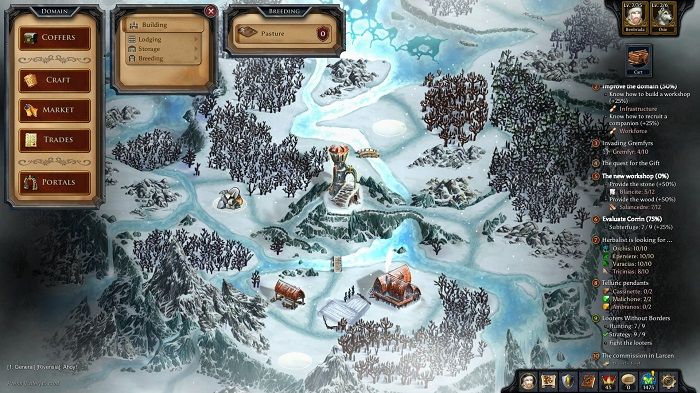 You also have your own kingdom to manage. Here you can chop trees, build crafting sheds and other buildings like a barracks for companions. You can also access your vault, craft, perform player-to-player trades and visit the in-game player market.

The portals button takes you to spots on the overview map that have a portal you’ve opened. Think of this as fast travel. They are handy but are scarce early on.

This is the place you’ll be ported to if you fall in battle. You and your companions will have their health restored as well. 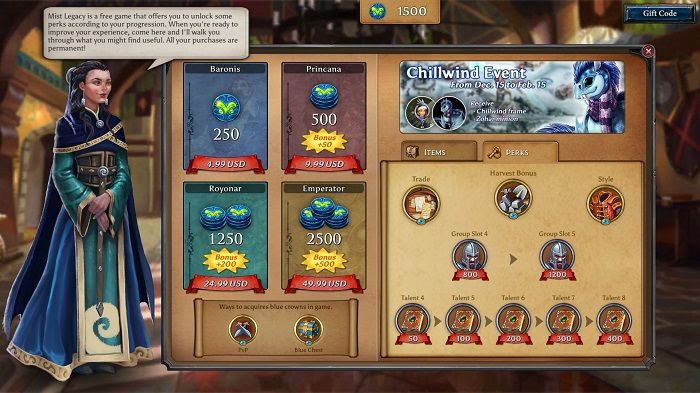 As far as the in-game shop there wasn’t much there currently to be excited about. The Items tab contains a handful of mostly event-themed cosmetics. The Perks tab has options to maximize your solo group slots. There is the option to buy five additional talent slots for your character but it’s not clear if these come into play for PvP encounters.

As you can see there is plenty to do in Mist Legacy from an RPG standpoint. The style and depth pose a nice change of pace and distraction from other third person MMOs.

The biggest issue in my mind is the game needs several quality-of-life changes. There are just a few things that act as killjoys, besides some slight English language issues.

One example is inventory management is a bear. It’s not clear exactly how close you are to being encumbered, in practical terms, and no easy way to tell how much you need to destroy to make room for something.

Another example being there is no way to crafting multiple items. Some quests want you to craft three hatchets for example. To do so you open the crafting screen, pick your materials, click craft (for one item) and then the crafting interface closes. Rinse and repeat ‘x’ times. Then to make matters worse there’s no way to multi-select each “hatchet” and move them all to your inventory, you must move each one separately.

On the plus side the development team seems to listen to player’s concerns and are making changes. It’ll be interesting to see where Virtys takes this F2P MMO and if they can thrive on the scant in-game shop they have so far. Bottom line, entry is free so why not give it a spin? You might enjoy your time in it like I have!