Build your own future Medieval Dynasty is the latest in a long line of life simulators and MMORPG just got a very special tour around this dark horse in the Toplitz Production paddock.

For those of you that have heard of Toplitz Productions, the Dynasty series of life management simulators will be familiar. The European outfit has done a roaring trade in lumberjack management and farming sims of late. So, when the first trailer for a gritty historic Dynasty game bolted out into the open, we had to track it down. Initially announced back in 2019, Medieval Dynasty is due to hit PC Early Access storefronts in early 2020.

The premise of this particular campaign plunges players into the depths of Europe’s Middle Ages. Playing a peasant with little title or land to their name, gamers can build their own future in a landscape that hasn’t quite succumb to the efforts of industrialization. Kicking off our own tangle with the wilderness that awaits players in the Medieval Dynasty, is a stormy winter night. Alone and abandoned in the middle of the night, the central protagonist and his family are forced into a desperate fight for survival.

Not Your Normal Dynasty

While the premise of most of the Dynasty series has been a bright game of commercial and social success, Medieval Dynasty is firmly rooted in the survival genre.

Toplitz described the game as “combining the most interesting elements of several game genres. The need to survive and overcome hunger from survival games, as well as the ability to build and craft a convergent with simulation games. Interacting with NPCs, taking care of them and doing quests for them like in RPGs or The Sims series. Expansion of the farm into the village, management of inhabitants and gathering resources like in strategic games. All this set in the realistic world of medieval times with the FPP view” 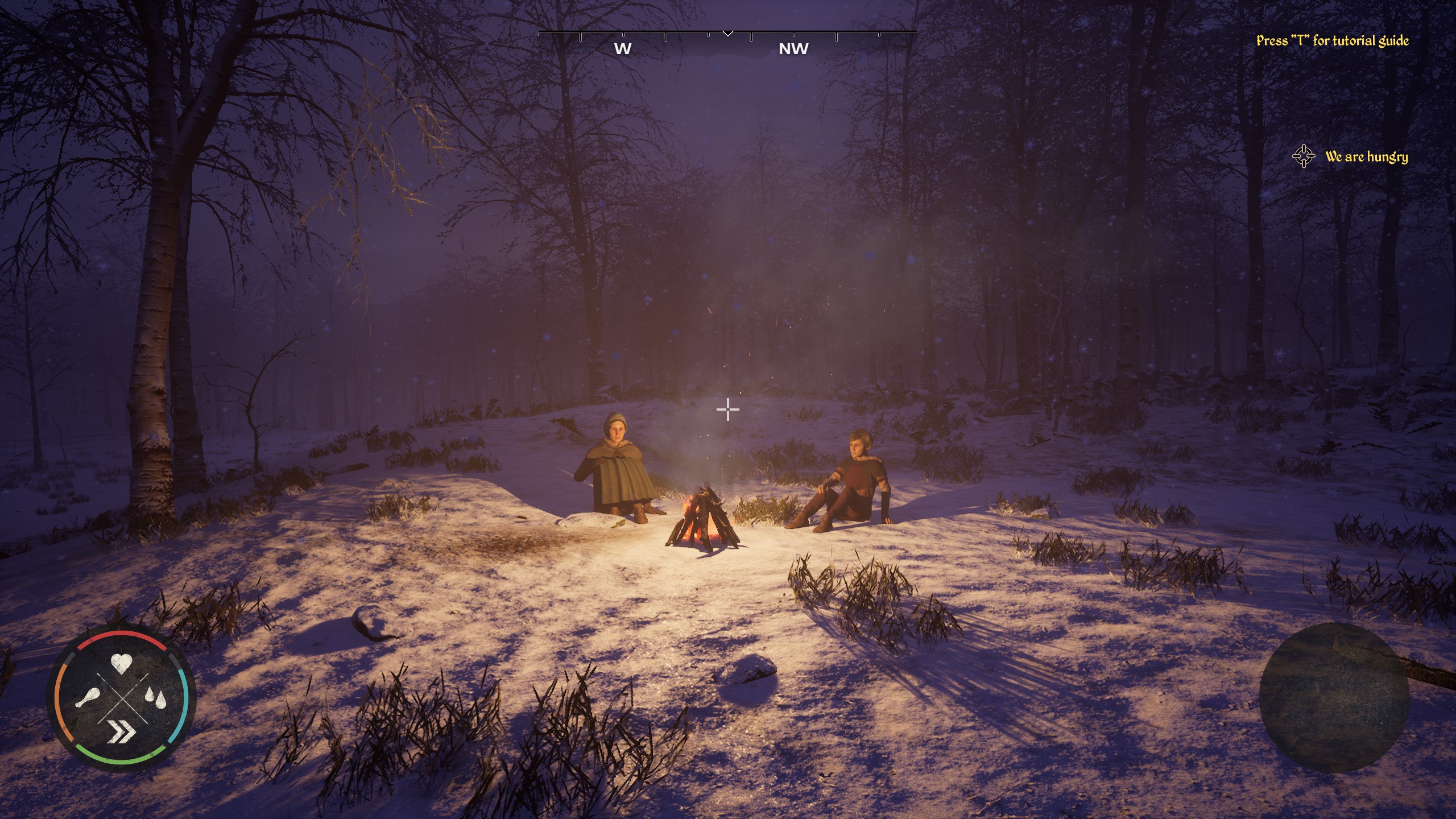 Take one look at the current UI and a series of stats are snuggled tightly in the bottom left corner of the screen. This colored circle of death ticks down any remaining water, hunger, health, and stamina available to the main character meaning that anybody familiar with other survival titles, like the Balck Death will instantly understand what is at stake here. The ultimate goal of building an empire is far from your mind when a violent storm has closed in and the first order of business is food and fire.

Rather than take on the sort of upbeat agriculture that Farmer’s Dynasty portrays, the Medieval iteration of the franchise dumps players into a world that is far more intimidating than Strawbery farm. The gloomy outlook of the opening forest is a great example of the grittier undertone of the whole affair. The day/night cycle leaves the game’s opening walk through in near darkness an between the trees, the odd silhouette of something ominous slinks by. Even when a campfire is finally found the unreal engine doesn’t disappoint with some solid lighting effects. While characters and their surroundings still look rough around the edges, the impression is that Toplitz is aiming for something much closer to a Witcher than a farm sim.

Crafting fire, like much of the Medieval Dynasty, is a combination of a sandbox crafting system and a deliberate narrative questline. Grounding the world and its inhabitants, these NPCs should be relatively recognizable from any RPG system that players have encountered and while they aren’t busy chatting amongst each other, they will be ready to direct players through a basic tutorial system. With a quest in hand, it is up to players to hunt and craft their way through the challenges that lie ahead.

Opening up a fledgling crafting menu unveils the option to build anything from a simple campfire to a basic house with the correct tools. Thankfully Medieval Dynasty’s peasant seems to be extremely skilled and streamlines many of the systems, allowing players to get down to business without too much time in the classroom. Crafting, trade, and hunting is largely gated by the resources at hand and equipping tools is as easy as grabbing an axe from the inventory and getting to work.

Find and craft the right type of arrows and that campfire that we discussed earlier makes a perfect place to roast the local wildlife. Grabbing a snack or two is essential to a character’s overall survival and one of the few combat style scenarios that appear in the Medieval Dynasty. This is largely a system still under development and while we can’t comment on the final state of hunting, it’s great to see the system in place. If it aims to be anything, it needs to be as useful and addictive as something like Horizon Zero Dawn, where I spent far too much of my time with Aloy. 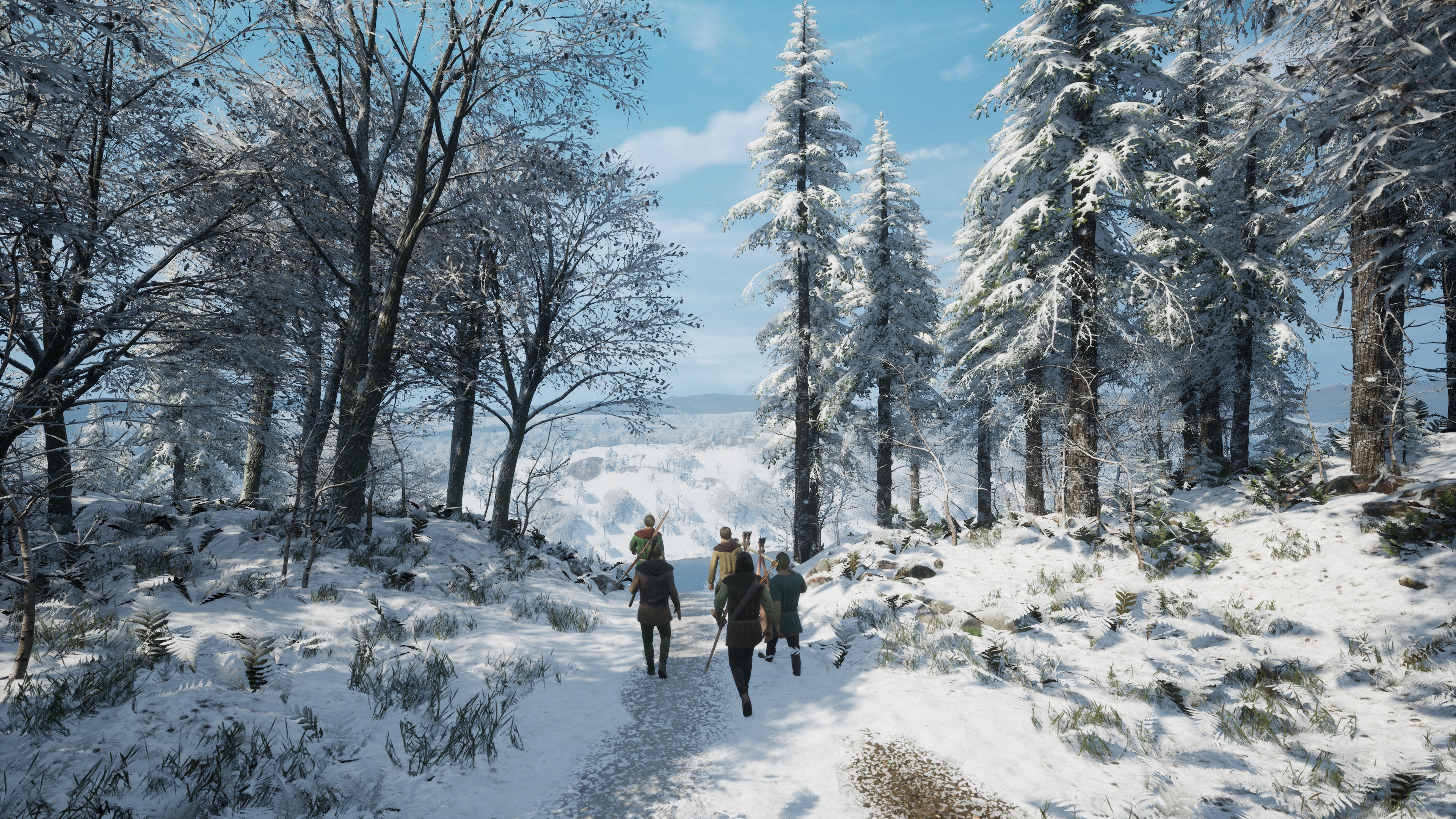 A Roof Over Your Head

Thankfully, Medieval Dynasty does not leave players out in the cold for long. This combination of narrative NPC led quests and open-world crafting mechanics eventually leads players to bigger things than fending off local wolves and feeding families over a campfire. The fledgling Dynasty spirals out into something with a little more grandeur, constructing houses, and other major structures across the middle ages by participating in activities such as logging, trade, and farming. With over 60 different pieces of equipment to craft, 18 buildings, furniture, weapons, and clothing all available, there is plenty of building to be done in the Medieval Dynasty.

As the saplings of prosperity begin to sprout, Medieval Dynasty should provide players with a wider macro game to delve into. The Middle Ages are full of opportunities. Conflict ravages Europe and kingdoms are in flux. This proves fertile ground to grow your own economic empire, trading with other areas, attracting new villagers, and even providing the kingdom with the strength it needs to overthrow its enemies. 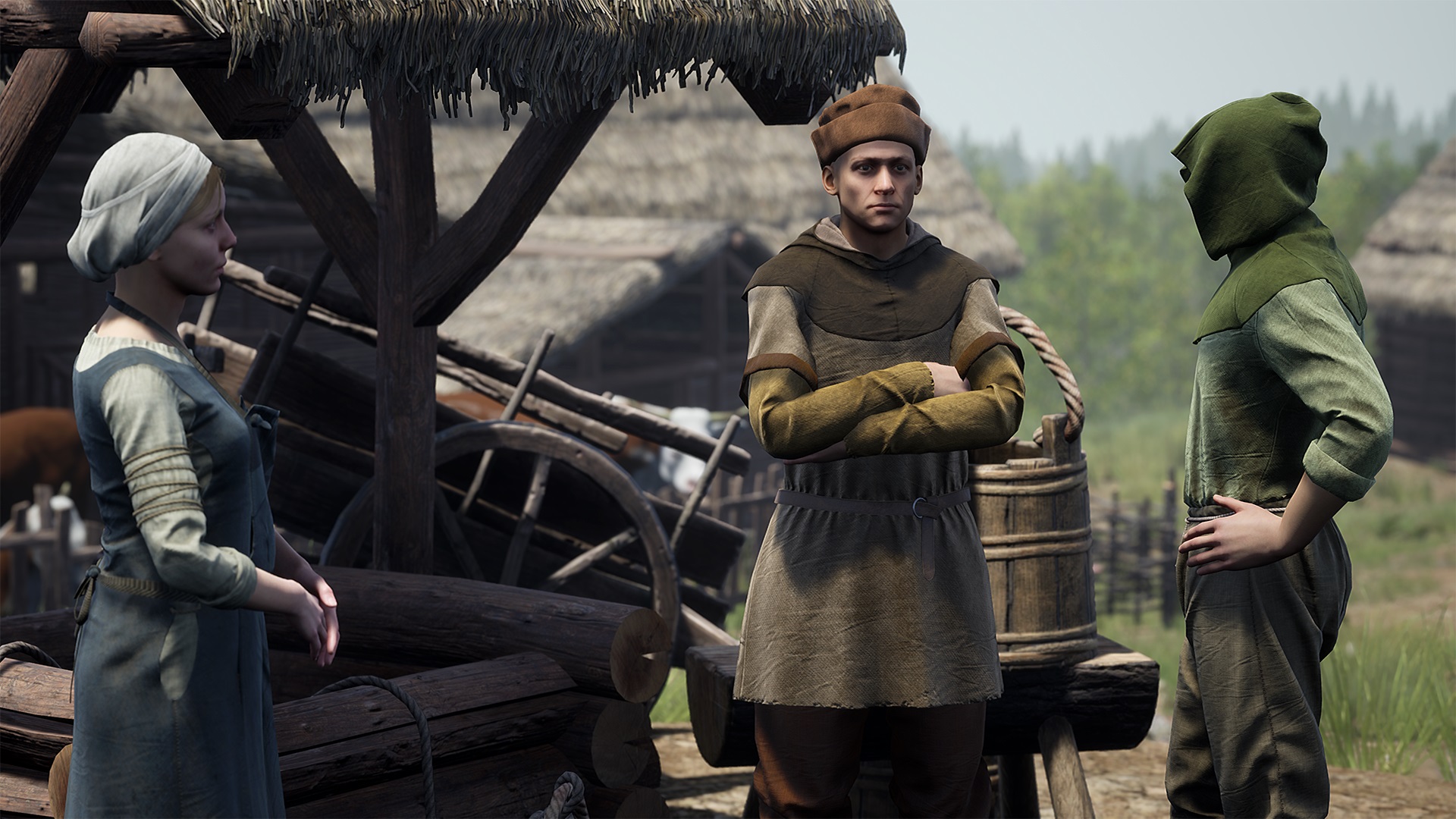 Toplitz Productions: “You start with nothing and you have to earn and learn everything by yourself. Over time, the single family farm develops into a small settlement, where other residents start living and working. Ultimately, it can be developed into a city.”

The warlords and soldiers, even unruly neighbors, from the other realms are not anything that your Dynasty needs to worry about. Medieval Dynasty does not include direct combat. Instead, it seems that this far away from the front lines the biggest adversary to any dynasty is uncertainty. Toplityz’s day and night cycles, a seasonal weather cycle, and what Toplitz is calling “unique events” are likely to cause enough conflict that you and your heirs will need to prepare for the unexpected.

We got around an hour to delve into Medieval Dynasty and initial impressions are that it is a step away from the good life of agriculture sims of old. Toplitz Dynasty series have always balanced a mix of economics, crafting, and social systems and, in many respects, Medieval Dynasty is no different, as described by Toplitz when we chatted about the game

“Overall the game is set to give the player the chance to write his own story in medieval history. It’s all about the life, the family and the survival in medieval times. In the game world there are different characters ,so-called "neighbours" who have their own stories and tasks”.

Social interactions, narrative elements, even furniture and decoration of your homestead still has a place here. Where this really takes on a flavor of the Dark Ages is the survival stakes and presentation at work.

Medieval Dynasty is unfinished, let us be very clear about that. The Early Access launch, if anything like our demo, will be a diamond in the rough. If Toplitz succeeds in crafting a properly polished title, then the Unreal 4 Engine looks set to make this grim look back at medieval survival look incredibly appealing. The raft of hunting and crafting systems at play brings a new element to a Toplitz production without getting too mired in the survival systems of something like The Black Death. Medieval Dynasty is a balancing act that could provide a new take on an established genre or a very dark take on social interaction systems like the sims. It certainly has me more interested in a trip to the Dark Ages than I reasonably should be. Check out the latest trailer for a glimpse of Medieval Dynasty and head over to the official Steam Store page for more detail before it hits Early Access on PC.