Last week Marvel Games and Netmarble executives held a virtual press tour to give the media some insights into the team’s next mobile Marvel game. Thankfully, I was invited to represent mmorpg.com and you readers at the “shindig”! The half-hour sessions involved a media pre-brief surrounding the forthcoming Marvel Future Revolution mobile game. There was an impressive showing by both companies which included attendees Bill Rosemann, VP & Head of Creative for Marvel Games, Danny Koo, Director of Production for Marvel Games, Simon Sim, President of Netmarble US and Joe Lee, Executive Producer of Netmarble. I personally walked away feeling excited about this mobile game, let me explain why!

As introductions were being made, I flashed my stack of fresh, newly purchased Marvel comics at the executives. It was no coincidence that I picked a time slot on the Wednesday of the tour, which is always “new comic book” day. It was also no coincidence that I had on my Ultimate Spider-man emblem t-shirt and a Marvel universe poster behind me. Bill Rosemann seemed to be the guy most responsive to my Marvel pride. In fact, anytime we discussed comic book “canon” or lore Bill was the guy to take over the microphone. After wowing the executives with my Marvel bravado, the presentation started with each of the four executives speaking over a movie dedicated to the key feature they were presenting from the forthcoming mobile open-world action RPG.

For those not familiar with Marvel Future Revolution the press releases describe it as Marvel’s first open world action RPG for mobile devices and the game will feature an original, adventure-driven storyline featuring fan-favorite Marvel superheroes and villains. The story was written by well-known Marvel writer Marc Sumerak. Of course, the game will be free-to-play.

What Brought Us All Together? A Stroke Of Comvergence!

After presenting, a beautiful action filled trailer of the game, Simon Sim presented a video discussing the game’s story. 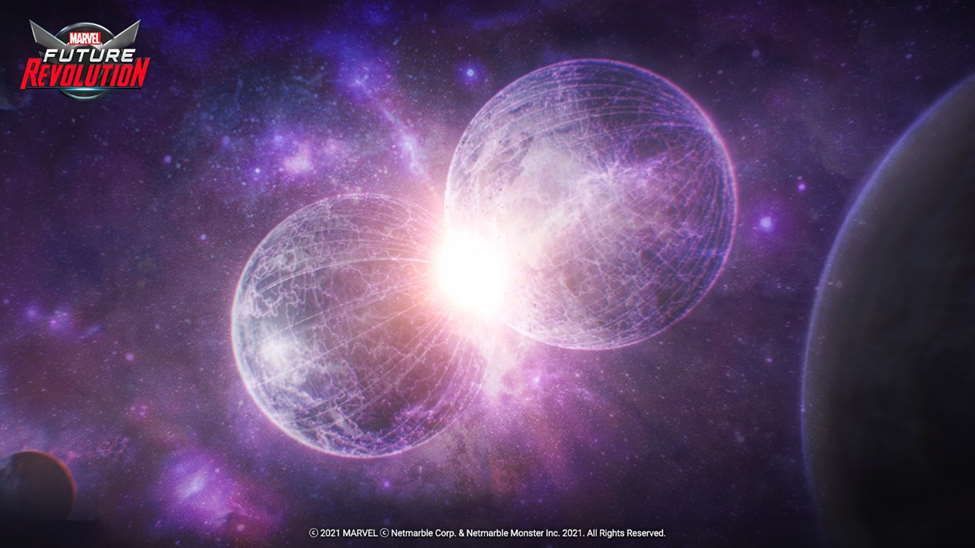 The game’s setup begins when numerous Earths are at risk to “converge” in the multiverse. Thanks to a sacrifice from the Vision what ends up happening is an entirely new “Primary Earth” is created filled with unique zones. If you’re a Marvel Comics fan, then you might pick-up on the fact that the whole plot might remind you of Battleworld from the Secret Wars and Secret Wars II storylines.

In fact, I had made mention that these “convergences” seemed similar to Marvel Comics’ “incursions” which caused the demise of the Marvel Ultimate Universe among other things. Bill Rosemann responded saying that it’s always a goal by Marvel Games to be inspired by comic book lore and canon. He mentioned that the choice to use “convergences” versus “incursions” seemed to be a wiser choice as a convergence results in saving more lives than an incursion.

Nevertheless, the in-game footage videos, which hopefully will be online by the time you read this, are beautiful! They seem crisp and clear like they were done in high-def. They had cool colored palettes and nice crisp lines on the characters and environments. Some of the boss details, e.g., the Red Skull’s face, exude lots of crisp details. 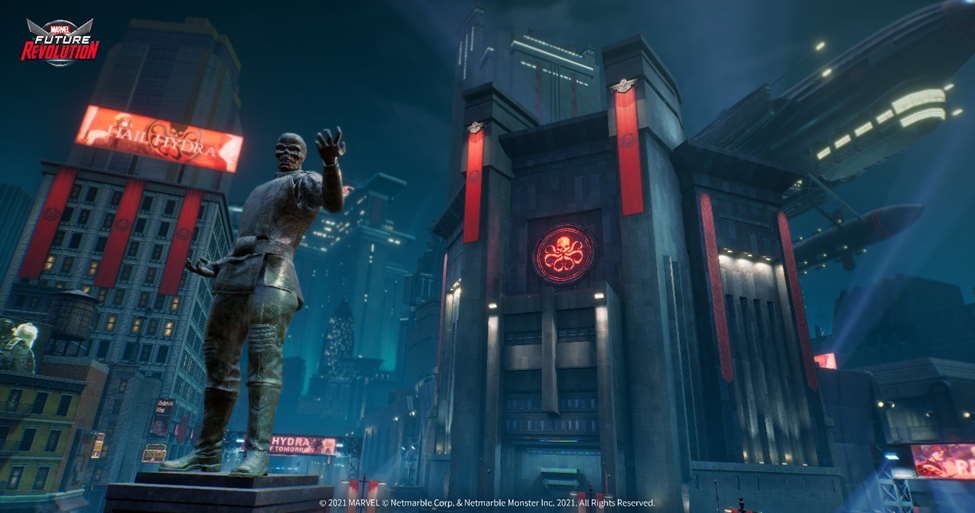 Next up was footage and discussion of the resulting “zones” that fell out as a result from the convergence.

We were shown the dangerous Hydra Empire, which was led by a dictator named, of course, the Red Skull. The streets of the Hydra Empire were very reminiscent of the craziness we were accustomed to in the Hyrda zones in Marvel Heroes Omega! 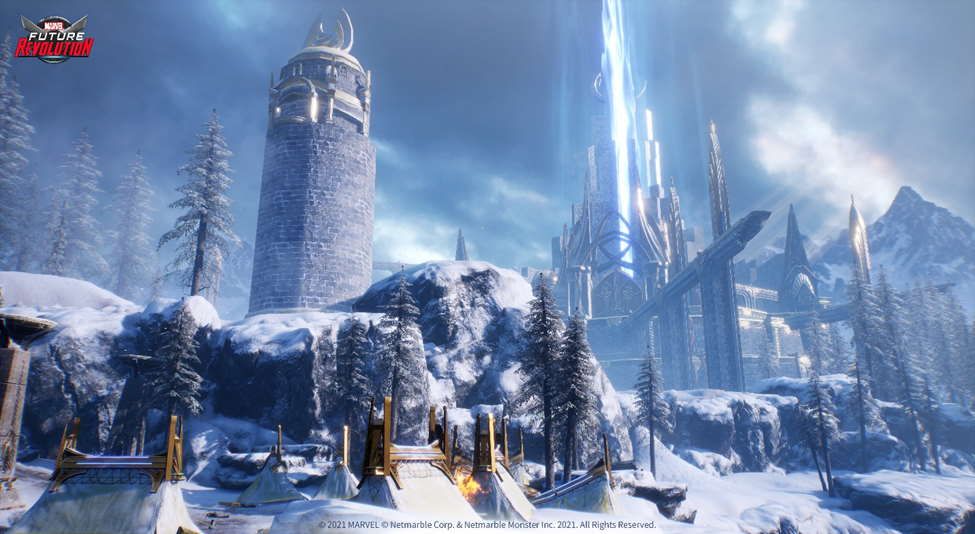 Then we got a glimpse of Midgardia. Midgardia was built by displaced citizens from Asgard who settled here after the Convergence. Citizens worked hard to restore much of their civilization, modeling a lot of their new establishment after the Asgard of old. We’re treated to chaos as hordes of Asgardians race to battle and fend off Trolls of all disciplines causing chaos and going head-to-head with Marvel heroes and Asgardians.

Next up was the high-tech New Stark City. Built by Tony Stark, of course, but it also looked to be policed by members of Shield. Plenty of citizens flying around a ’la Iron Man style in what appears to Guardsman-like armor. New Stark City is also the home of the superhero team, “Omega Flight”. This is the team that players will work together in to protect us from the fallout of the convergence.

But let’s not forget about the wild and rugged Sakaar. Sakaar is a dry desert city decimated by radiation. The “ruler” here is the fan-favorite Hulk of the future, old man Hulk, err Maestro! 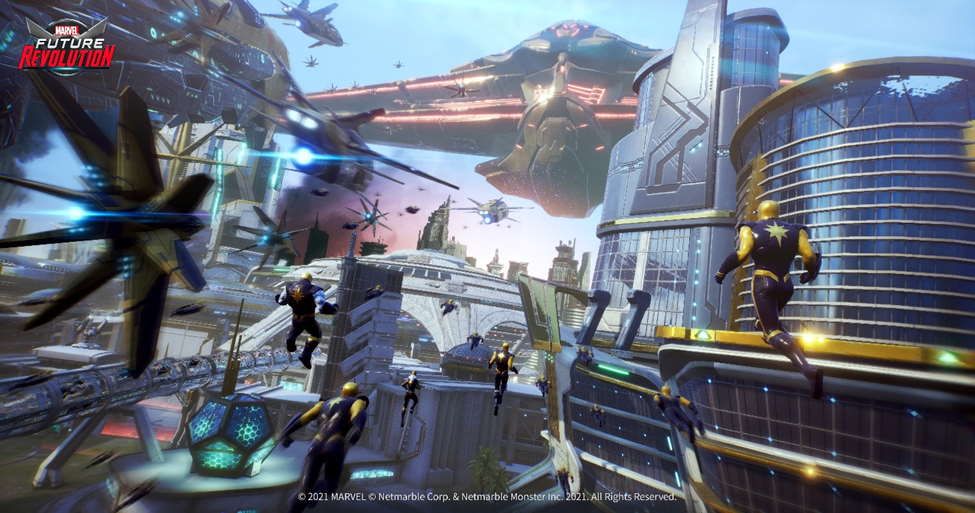 Lastly, is Xandearth which is the home of the Nova Corps. Staying true to form the Nova Corps continue to enforce and abide by their principles of peace and justice.

Okay, But Who Can I Play?

The next video of in-game footage and discussion showed us the initial eight playable superheroes at launch. This includes Captain America, Captain Marvel, Spider-Man, Black Widow, Iron Man, Doctor Strange, Star-Lord, and Storm. Of course more characters will be added as the game progresses after release. 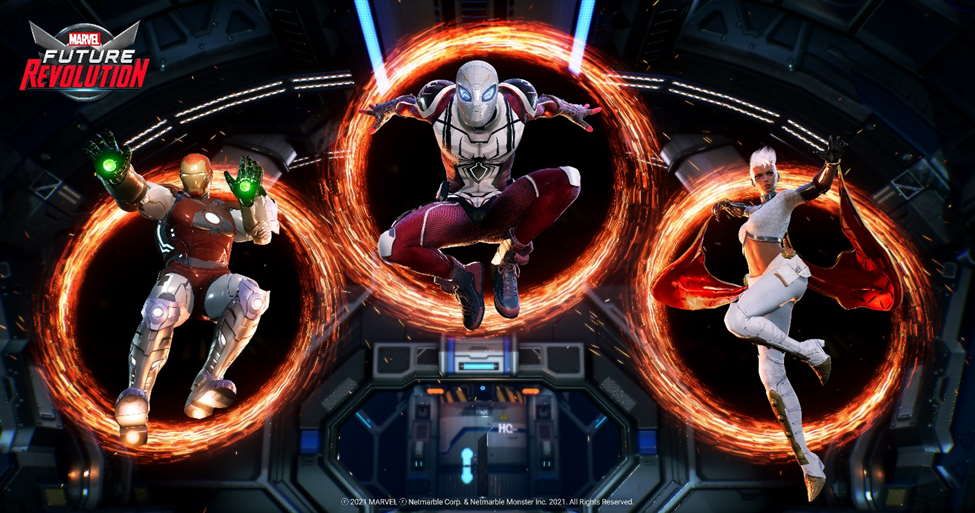 A lot of effort has been put into the costume customization feature. Playable heroes will be outfitted in an extensive collection of iconic costumes, and costume pieces, from the Marvel Universe. The video showed off of course costume sets from the MCU.

A great feature is that you can mix and match costume pieces to make your own patchwork costume. With the ability to control what is slotted on your head, hands, body, and feet you’ll be able to create more than 400 million costume combinations per hero we’re told.

A Fury of Gameplay Options!

A lot of the presentation and discussion also focused on choices of gameplay modes. If the developers can pull these off in a mobile environment, I think a lot of fans will be happy!

Other than the typical “Campaign” / story mode there will initially be four other modes to participate in.

The first being a “Blitz” mode which is four players partaking in PvE, think “boss fight stages”.  Here you and three other players can take on the minions of, and then the villains themselves, like Thanos, Red Skull, Ultron, Kingpin, Maestro, Loki, etc.

“Special Operations” is another four-player mode that are stages with specific events, e.g., Xandearth Defense, Hydra Escape, etc. The way I understood it in this stage everyone will play with balanced stats, i.e., non-spec related.

There will also be two PvP related modes. The first being “Omega War” which is ten players versus ten players PvP. This appears to be a zone in and start guns blazing, last man standing type of affair.

Lastly, is the fifty player “Dark Zone” mode which is PvPvE. Essentially a “free-for-all” mode where you can hunt on your own or team-up with others to take on zone bosses or take someone on 1 vs 1.

As the presentation wound down the team stressed that the game will always be evolving. New content will be added throughout the game’s life, ensuring there is always something new to achieve in-game. This includes new locations, new characters, new content, new modes, and progressions. 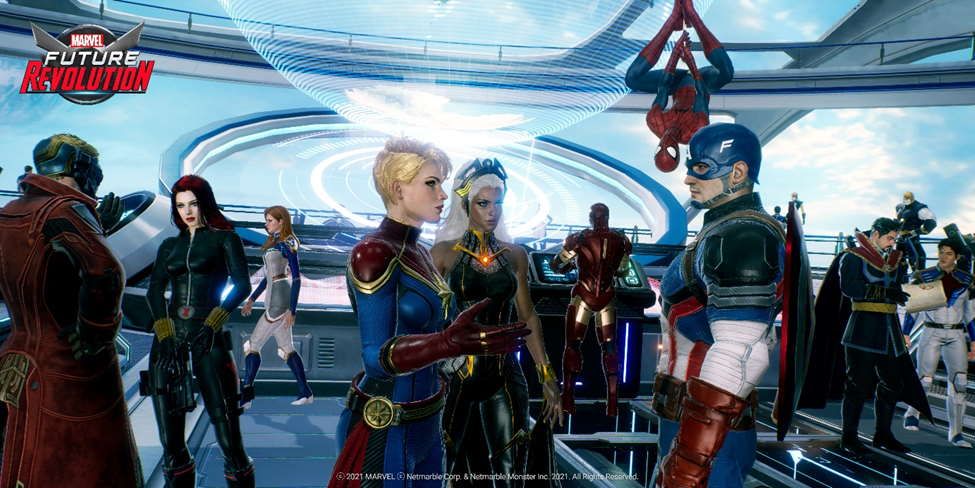 After the presentation there wasn’t a lot of time left for questions. I did manage to get in a few.

The first being, what are the minimum hardware requirements, i.e., phone specs, to run this gorgeous looking game, especially with a fifty player “Dark Zone” mode? Unfortunately, they are not ready to release that information just yet.

I also asked this executive team if they thought that Marvel Future Revolution could fill a huge void left in many of us when Marvel Heroes Omega (MHO) shutdown? Danny Koss replied with the fact that this game is a 3D Open World game with AAA-quality graphics, a massive story and challenging game modes. But to sum it up I think I got a long way around to a modest but simple “yes”.

I’m personally excited for what I’ve seen without knowing all the full details yet, e.g., what powers do we have, how do we get new heroes and costume pieces, etc. There was also no discussion about an in-game store, etc.

Even so the footage I saw, that should now be available online, was beautiful, not that great graphics make a wonderful game. But it’s hard to deny the extensive detail on the Red Skull’s face in a mobile environment! Watching the amount of footage, the team made available I couldn’t help but make some positive comparisons to MHO. For me it’s more of a question of how it’ll all play out on a limited mobile screen.