Core, the do-it-yourself game creator by MantiCore Games, comes to the Epic Games Store today, bringing 20,000 free games from creators all over the world along with it. Every genre under the sun can be represented in Core, according to its creators, and I was able to take a quick tour with a few of those creators as my guides. What I found was a truly impressive variety of offerings and the ability to switch between them on the fly, meaning there was always something new to check out.

My tour of Core included Frederic Descamps, CEO and co-founder of MantiCore Games, fellow co-founder and Chief Creative Officer Jordan Maynard, and Chief Marketing Officer Patrick Buechner. The four of us adventured through fantasy MMOs, first-person multiplayer shooters, side-scrolling adventures, and more. Some felt familiar -- and some were certainly meant to feel familiar -- but I found myself forgetting that all of these games were created by the community, not by a standard development team. The more I thought of that, the more impressed I became.

After creating my character through Core’s extensive customizable and combinable skins, I found myself in Core World, the hub that brings all of these games together. From here I can choose which game to play, jump in, and off I go. First was Corehaven Chronicles, a full-on MMO with talent trees, mobs of enemies, and tough bosses. Loot drops were common, the loot itself instantly equippable, and the action always coming. The experience is indistinguishable from other MMOs, though I admit my character wasn’t in full medieval fantasy role-play mode with his futuristic hoverboard mount.

That hoverboard actually speaks to just how deep Core goes in its customization. If a creator wants to create a strict universe based on a certain genre, it’s possible. If that same creator wants to amalgamate multiple genres -- like giving a Back to the Future hoverboard to a DPS warrior in an MMO -- it can happen. The scale of this creation suite is massive, despite how incredibly simple it is. Even the music of Core, while composed by the company’s audio director, can be modified by the player through pitch and instrumentation. Original compositions can also be uploaded as a MIDI file by community members as well. There is nothing in a game created in Core that wasn’t chosen or modified by its creator, which is simply wild to think about. 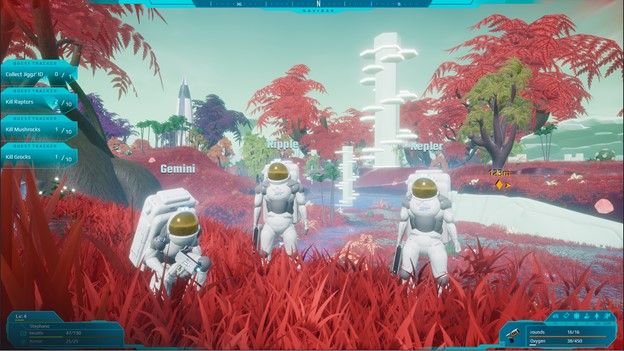 After Corehaven Chronicles we switched to Star Colony, a space exploration MMO developed by a team led by a 14-year-old boy. This one included a monorail system to travel between worlds, main and side quest trees, and dialogue with multiple NPCs, and all of it was built in less than a month. From there we ventured into a third-person MOBA shooter called Nexus Wars, and suddenly I was blasting at other players trying to get into their base and destroy it. From MMO to MOBA in the blink of an eye, without any hesitation, is Core at its...well, Core.

“Part of our vision,” Descamps said, “is to bring a new wave of creators to gaming, to allow anyone to make games, publish them, and make money. We have all sorts of creators, from all sorts of backgrounds, all of the world, ranging from age 13 to people well into their 60s. It’s been really wonderful to give creativity to players unlike anything seen before.”

Next was Infinity Arena, a first-person shooter game with some familiar looking characters and weapons on a map which very much resembled the Lockout multiplayer map from Halo 2.  While I was having a blast (mixed with some nostalgia, a testament to how well the game was built) the experience raised an interesting question: what’s Core’s approach to policing content that could be considered copyright infringement or plagiarism? In my brief time in the Core World hub I had seen a few games that looked to be taking a few liberties with its source material, so where does Core draw the line when it comes to its creations? 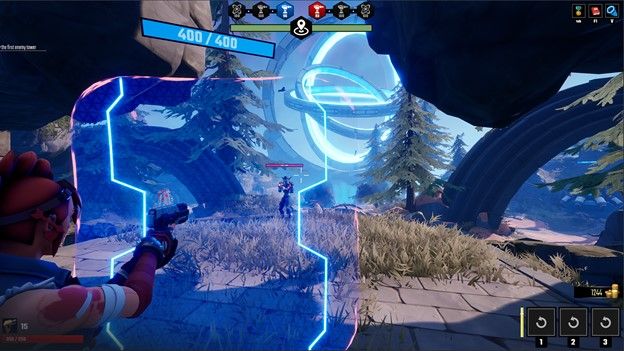 Descamps explained that Core uses “best practices that all other user-generated content platforms use in the US, Canada, and Europe.” “For example,” he elaborated, “in the US we follow the DMCA laws, so while anything is possible on our platform, any IP owner can contact us, make a claim, and we will act accordingly. Either we will leave the game alone because we don’t agree or we will take it down because it's a pretty clear DMCA offense.” Descamps is also not worried about popularity bringing new potential malcontents, saying the concern “comes with the territory”  and that “we’re equipped to deal with a lot of users with a lot of systems in place. We used to work on MMOs, so we know what to expect.”

Next was the most unique of all the games I played on my tour: Tumbleweed Typo Hunters. Every character in this game’s world is a word, giant letters with arms and legs. If I find a word with a typo, I must type the correct spelling into the Core chat function, which loads my gun, and then I have to shoot the poor typo out of existence. This was a super fun idea, easily the most original of the lot, and honestly something that could be used as a spelling tool for younger players. After that was a homage to Ghosts N’ Goblins called Sir Pepe and the Goblins, a multiplayer arena game with magic called Spellshock 2, and a few others. Every single one had its charm, making me only want to explore the offerings of Core even more.

Then we came to the end of the demo, which for me was the most unbelievable of the entire hour and a half session. Maynard initiated Core’s create feature, showing an empty 3D space. He then turned that space to a Western-era multiplayer shooter map, a small town in the middle of the desert complete with buildings for cover, and added us all to the game to play, in four minutes flat. While we were playing that brand new game -- which you can play within the platform right now by searching for “JasonDemo” by the way -- Maynard added a portal to a completely different game, a Call of Duty Domination-style game where I wielded a giant hammer, and all we had to do was enter the portal to switch games. My mind was absolutely blown. Something that takes massive studios multiple years and millions of dollars was accomplished in front of my eyes in the same amount of time it took me to write this sentence.

There’s a ton to love about this Core platform and the offerings it provides to prospective game creators. Granted these tools are not as detailed or robust as a major AAA studio’s creation suite, so onlookers might think these games to be rudimentary or less impressive, but that would be selling this platform short. The sky is truly the limit for anyone who wishes to check out what Core has to offer, and now that it’s available on the Epic Games Store I imagine that 20,000 game total will be 200,000 soon enough.