Taking an iconic IP like Magic:The Gathering and giving it new life in another medium is no easy task, but it’s one that Cryptic Studios is currently undertaking with their ARPG Magic: Legends.

Last week we had the chance to go hands on with the ARPG, taking our very own Planeswalker for a spin. It was especially interesting for me as someone who has played MTG for most of my life off and on, learning how to play with the introduction of the Portal set back in 1997, and then falling in love with it again during the Battle for Zendikar block back in 2015.

Ironically enough, the first location I was dropped into was the continent of Tazeem on the plane of Zendikar, the iconic hedrons and the rampant growth of the wildlife around me giving away the location right away. At first glance, Magic: Legends looks like it was pulled right from the stellar and one-of-a-kind artwork from MTG’s talented artists. Instantly it evoked a sense of place that I’d only imagined when playing cards across from friends and family members on Friday nights.

Our mission saw us helping the merfolk scholar Kama, who is a character made for Legends, try to figure out the corruption affecting the hedrons. It’s here I got my first chance to try out my Black-mana Planeswalker, the Necromancer. 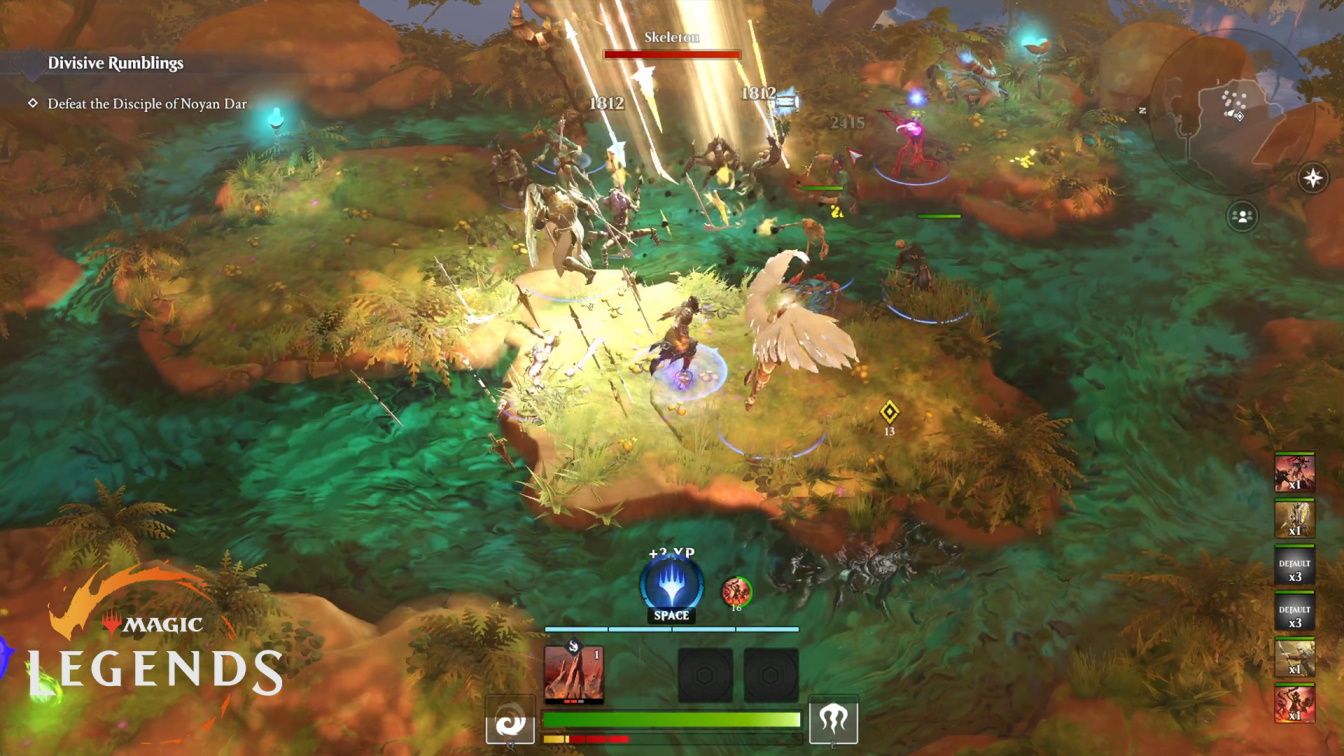 Planeswalkers in Magic: Legends are starting points, they don’t dictate the colors you have to build your decks around, rather they give you a set of abilities you can build around and synergize with. My Black mana Necromancer piloted a Red-White (Or Boros for the Magic-literate out there) creature deck that saw us building armies of powerful creatures, buffing them up and, effectively doing the Magic: Legends version of “turning them sideways.”

This Boros deck perfectly showcases how deck and Planeswalker synergies can be powerful weapons when built correctly. As my Boros deck summoned creatures like the powerful Human Knight Benalish Marshall as well as a multitude of Red Goblins (more on this in a minute), my Necromancer’s own abilities raised Skeletons from the dead, adding to our army’s numbers. Powerful enchantment spells in my deck then buffed these creatures, pumping them up to make them both physically larger and more powerful.

As I ran around Zendikar trying to help Kama find the source of the hedron’s corruption, it’s here my first real issues with Magic: Legends began to crop up. As an ARPG, the primary way you move and attack is using your mouse. It’s a control scheme I personally have a hard time with getting used to, and unfortunately due to the nature of our preview I was just kinda thrown in there without much of a learning curve. I found it hard initially to figure out who or what I was attacking (come to find out I was going against a Blue mage sending Sphinxes and Water Elementals at me), or adequately positioning my Planeswalker on the battlefield.

Part of this was also down to the camera positioning as well. Currently, according to Principal Lead Designer Adam Hetenyi who walked me through the session, the camera’s distance is fixed with no ability to zoom in or out. For most people this is probably fine, as Adam mentions it is mostly about “art consideration”

“It’s mostly about art consideration,” Adam told me in our session. “We’ve tried different camera distances over time, we settled on this because we feel like it’s the best blend of view distance into the battlefield while still being able to see things clearly. I do know that things can sometimes get visually noisy on the screen, especially when your summons and enemies are all mixed together. So it is something we’ve talked about, adding support for that, but we don’t have any explicitly laid out.”

This was felt even moreso when I got to the next mission, set in the Innistrad region of Gavony. Innistrad is one of my personal favorite planes in Magic’s history, the blend of 19th Century Gothic themes against the backdrop of vampires, werewolves, angels and more. Stepping into Innistrad made me feel like I had just walked onto the set of a Frankenstein movie, or into one of Bram Stoker’s novels. The mix of Gothic influences with the science of those who inhabit Innistrad had me wanting to yell “It’s alive!” on a few occasions when I summoned my creatures to combat the experiments gone wrong attacking me.

As I helped the swamp witch Nani Oula to charge and protect generators to charge a nearby soul battery from waves and waves of enemies, the ability to zoom out would have been amazing in that moment. The screen filled with so many creatures, my own and the waves of enemies coming to dismantle our work melding together in a chaotic mess that left me wondering if I was actually doing anything productive in the mosh pit of chaos onscreen.

However, getting more comfortable with Magic: Legends, and the hectic moments like that might just come with time. Admittedly, I was kind of thrown into the deep end to get an idea of high-level Planeswalker play and deck mechanics, but had I been able to start from scratch and build up a character and my own personal skill with the ARPG itself, it might not be so bad.

One major takeaway I have from the preview, though, is that Magic:Legends feels like Magic: The Gathering. The spells are cards from a deck you draw from throughout the mission, spending mana to cast each one. There are no turns as everything is real time, so you regen mana in-place of an untap step. As you cast spells from your hand, you’ll randomly draw another from your hand to replace it, rotating these spells randomly throughout the mission.

Each spell has a mana cost similar to the real card on paper, such as the three-White needed to cast Benalish Marshall or the XR(ed) to cast the powerful Goblin Offensive in the Boros deck. The varied casting costs also make an appearance, allowing you to spend mana on “X” mana costs like you would on paper, creating more powerful versions of a spell.

Some spells have a kicker cost, letting you pay more for them to unleash a powerful benefit in addition to the normal utility of the spell. It feels like playing Magic, where you’re managing resources and the spells in your hand to combat the threat on board. The team worked hard to create the “essence” of the cards represented in the game, ensuring that each card feels like it would operate in the world as it does on paper.

“So when we want to get a spell,” Adam told me during our play session, “especially a spell that people know, or an iconic card, and we want to do a version of that in the game. We don’t necessarily just want to be rules lawyers and say, ‘Well the text says this, thus it must do exactly this.’ But rather the text says this, and the card art looks like that. And the flavor text is this other thing. So the overall essence of [the] card is something that we kind of grasp onto. And when we think about how we can make that essence tangible, noticeable, memorable in our game, if that drifts too far from the core mechanic of the card, then maybe it’s not a good translation.”

“And so alot of where we end up with is high value control spells, or control spells that turn into damage. So for instance we have a sleep spell that when you break the sleep you get a hugh damage bonus. Because ultimately in an Action RPG you still need to have damage happening. If all you’re doing is control, then ultimately you’re not killing anything, right? So finding a way to make the Blue mana spells, especially iconically  Blue mana spells feel Blue mana-y without being ineffective in terms of killing stuff has been an interesting challenge.”

All in all, when our session was over, I came away wanting to play more. This was Magic as I’d not experienced it before. Sure, I wasn’t going to be casting Cryptic Command anytime soon, but I wanted to try out more Planeswalker and deck variations to find exactly what worked best for me. Could I make a pure Burn deck, like a Red Deck Wins with a Blue-aligned Planeswalker? Could we see some decks splash a little bit of a third color, creating Esper, Jeskai or my personal favorite, Grixis (Gotta get me some Nicol Bolas action in here)?

Can Tron players be happy with the deckbuilding in Magic: Legends?

I can see many articles and videos being produced, theorycrafting deck and Planeswalker variations. And that’s not even talking about the bevy of artifact and equipment options that even further synergize your Planeswalker with their spells and abilities.

Magic: Legends feels poised to break some of the traditional ARPG molds thanks to it drawing from the IP’s card game roots, spicing up the genre a bit with the added depth. Personally, I can’t wait to dive in next when it goes into open beta on March 23rd.