I loaded up Lost Ark ahead of today’s closed beta and was a bit nervous after hitting the play button for the first time. After the game’s original release in late 2018, I read up on how players were enjoying it at the time. I was curious to see if the hype was warranted and how the localization was progressing. It was a pleasant surprise to jump smoothly into character creation and then quickly into gameplay. While my impressions out of the gate were OK, they only continued to improve as I passed the 37-hour mark during the week. I will admit I lost track of time more than once while playing the game.

Character creation in Lost Ark was a joy. Lately, with other games, I found myself agonizing over tweaking sliders and color palettes to make a character look just right, and half the time failing even after an hour or more. Having its roots in the A-RPG genre, character appearance in Lost Ark is limited, but there are enough options to make them somewhat unique. The body type is static and determined by the base class. But the various faces, hairstyles, make-up options, and appearance accessories allowed me to make five decent-looking characters quickly.

Choosing what classes interested me was also easy enough. I liked that there were video clips during character creation for each advanced class, providing good visual examples of a few different abilities. I finally settled on playing a Paladin as my main, but I did play through the prologue with a Striker and Sharpshooter as well. Going from a Paladin to Sharpshooter took a bit of an adjustment, but all the classes I tried were fun to play. Each class also feels like they have a unique identity.

After character creation, there is a short narrated stylized cutscene that tells the backstory of each base class. At this point, I found the experience a bit jarring since once the cutscene ends my character appeared near Beatrice, a Lazenith whose mission is to watch over the mortal world. She quickly has the player go through the short advanced class selection process. Once completed, I went through another portal to begin the new 10th level prologue quest. But there is no explanation about how I ended up on a ship with a new group of adventurers. It felt rushed and with a limited narrative and failed to hook me at first.

Other than the in-game character models, the graphics in Lost Ark range from good to great. While the base character models seem to lose something after the character creation, they still look decent, if a bit dated. Gear also looks good, and I can imagine some items at later levels look fantastic. However, enemies and environments are where the graphics and art direction shine.

There are new enemy types for each environment, and many locations change up the color palette. The game didn’t give me time to get bored visually. Some areas are a treat, helping enhance the story to a new level. Players will also come across vistas while exploring that give some experience along with a nice visual. It reminded me of Guild Wars 2, minus the jumping challenges/puzzles. 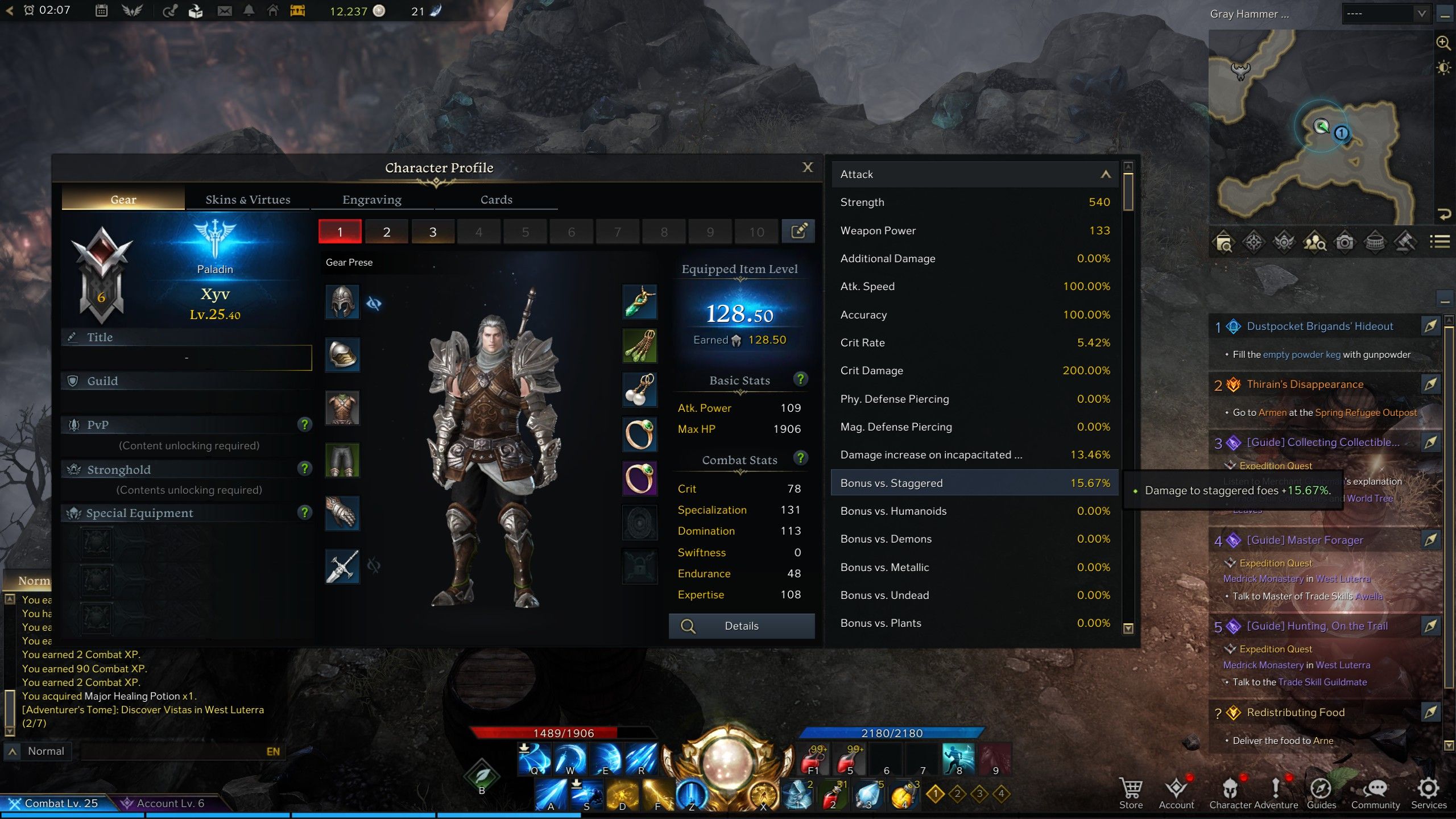 The UI in Lost Ark is well designed and easy to use. Tooltips are well done and easy to understand. While there is a lot of information to digest at first, I found myself quickly navigating through the different screens easily, and it all has a clean look to it. I loved the sheer amount of customization with the ability to respec, set up different skill sets, and swap between hotbars for accessing various consumables. It feels like the developers wanted to make it as convenient as possible for the player to swap around their build/loadout.

Combat is smooth and responsive. Each class has flashy and fun abilities that fit their identity and a signature ability. It’s just a question of finding which one appeals to you as a player and then seeing if the pacing of that class also matches your playstyle. The tripod system allows for further customization of class abilities by spending skill points to advance through three tiers, providing optional bonuses/effects for each one.

I found that with a Paladin, I had to more carefully select what abilities to use and when to use them. I enjoyed having to time ones together to clear an area while saving my signature ability for stronger enemies. My signature ability could alternatively be used as a buff for other party members. As a Striker, it felt faster-paced, and I was charging into the thick of fights. With a Sharpshooter, combat was slower until I had everything clumped and could rain down death on the enemy.

The story in Lost Ark is initially a bit of a mess as I have already noted, and the game has a somewhat basic plot. With the removal of the Level 1-10 content, it felt like I was missing something. It would have been nice to have the option of playing through the base class content once and then be able to skip it for future characters since I expect alts to be popular.

I also noticed that the short narrative cutscenes after the character creation still have some issues with matching the voiceovers to the subtitles, and a few don’t explain the story well or are confusing. For those not familiar with the game’s underlying story you are searching for the Ark created by the god Regulus which has been split into pieces. From only the in-game narrative during my first 5-10 hours, I was unsure if the goal was finding parts of an ark, a single ark, or multiple arks. Eventually, it does become clear, but it was easier to just go read the story A Sage of Light.

I also was a little concerned with the storytelling when some characters started stealing the spotlight from your character at certain key moments. Thankfully, this ends up being the exception and not the norm. The storytelling vastly improved the further I progressed through the first continent. That's right, there is more than one continent.

In the end, the Lost Ark's storytelling successfully hooked me into caring about some of the characters. Priest Armen, Prince Thirain, and Priestess Seria all immediately jump to mind. While the relationships with them form quickly during the storyline they felt connected to my character. By the end of my week, I wanted to start improving my reputation with them simply because they started to feel like friends and allies.

The Smilegate RPG team also got to me with the music and sound effects at a few different spots. It added so much emotional weight to certain scenes that it caught me off guard. Sadly, during regular exploration/combat, some sound effects and enemy voices were so bad that they could break my immersion for short periods.

My first 30 or so levels were classic A-RPG gameplay with some resource gathering and a few dungeons. It was fun, but I did find myself wondering what else there was to do long-term in this MMORPG. Thankfully, once I finished up the story for the first continent, more activities quickly became available. I now have a ship to explore the open sea, a reputation system to develop, pets, mounts, crafting, cards, and an island to decorate/upgrade. I am even looking forward to trying out PvP on more than a casual basis since it's disconnected from the PvE systems. 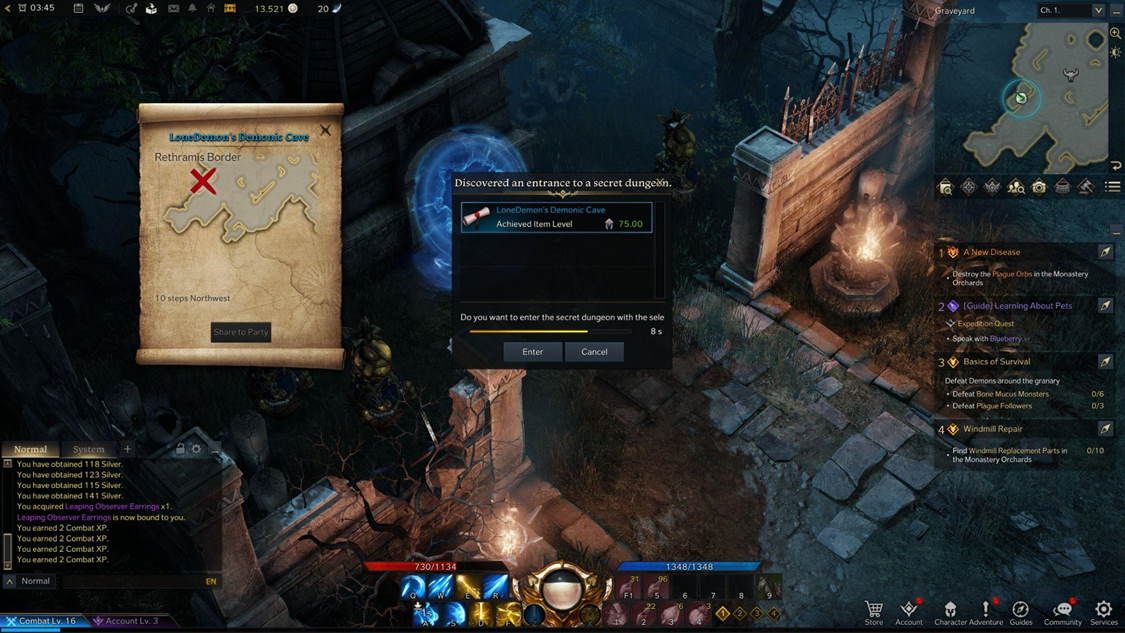 There are a few minor things that fans of classic A-RPGs may find missing, which I noticed but eventually got used to and, in some cases, grew to prefer. While there are secrets and collectibles on any given map, there is no fog of war. Therefore, you are not uncovering each map as you progress, and the maps are static. The environments have no breakable objects or random chests/containers to click on for loot. The story is also all told through instance events and in-game cutscenes except for at the very start. At first, I was disappointed with fewer random glowies to click on. But I quickly came to realize that instead of worrying about random treasure caches that rarely dropped useful gear I could focus more on the combat. Also, after a few of the epic in-game cutscenes, I am all in for more.

The amount of loot that drops in Lost Ark also feels somewhat less in comparison to similar titles. But it feels more meaningful, and I did enjoy not having to deal with as much inventory clutter. I was able to enjoy my adventures without having to portal back to town every 15 minutes. You are also able to break useless equipment down with only a couple of button clicks. I could then sell the debris stacks to merchants. One thing I loved was the free inventory page for storing crafting resources. I felt spoiled with all the extra inventory space after being inventory starved in so many other games.

I did notice a few localization issues and minor bugs during my playtime. Any of the quests that involved using an emote did not match the slash command in the quest tracker. The respawn rate on some maps could cause issues when activating an object/switch for a quest. Finally, I had several disconnects from the server over the week. After each one, I was back into the game within a few minutes.

While I would like to see more of the classes receive male/female versions. I expect that will gradually come with time. Other than the early story issues and a few minor bugs, I feel the game may be ready for open beta or some form of Early Access during the holidays. But I will reserve final judgment on that until I see how the servers perform when players flood in this week. My lingering concern now is monetization, which could make or break the game in the western market. Though from what I am reading, the developers and publisher are saying the right things. (https://www.playlostark.com/en-us/news/articles/lost-ark-business-model)

Once my time with Lost Ark was up, I had reached level 41 with my Paladin. The game is a lot of fun. It gobbled up my free time. Unfortunately, I could only briefly touch on the game’s various systems in this article. But I can’t wait to dig into them further, play with others, and level up a few alts. Smilegate RPG and Amazon feel like they have a real gem here that could grow into something even more.