Sitting on a call on Discord with the team at Donkey Crew, you can tell they are passionate about their upcoming project, Last Oasis. Billed as a survival/mmo hybrid, Last Oasis pits you as a survivor in a barren world where it’s always daylight. The team showed off some recent gameplay to press last week in a hands-off demo ahead of its March 26th early access release on Steam, here’s what I thought after about an hour of gameplay.

At first glance, Last Oasis looks like your bog-standard survival game. And indeed, right away I instantly thought to the opening moments of Conan Exiles – you’re dropped in the middle of an area and right away you’re required to find the tools and resources necessary to survive. Basically, survival 101. However, while many of your first moments in a survival game like Conan or ARK: Survival Evolved will revolve around building a small shelter to survive a night and start storing your stuff. However, as you’ll discover soon in Last Oasis, you can’t simply hunker down and sit still, content to fortify a certain area for a while.

Last Oasis is a survival game that has you constantly on the move. The sun never sets and is constantly scorching the earth as it moves across the horizon. So, you need to stay ahead of it or die. Last Oasis makes this interesting by introducing large constructed walkers that can carry you, your friends and more across the landscape from oasis to oasis to stay ahead of the deadly sun. 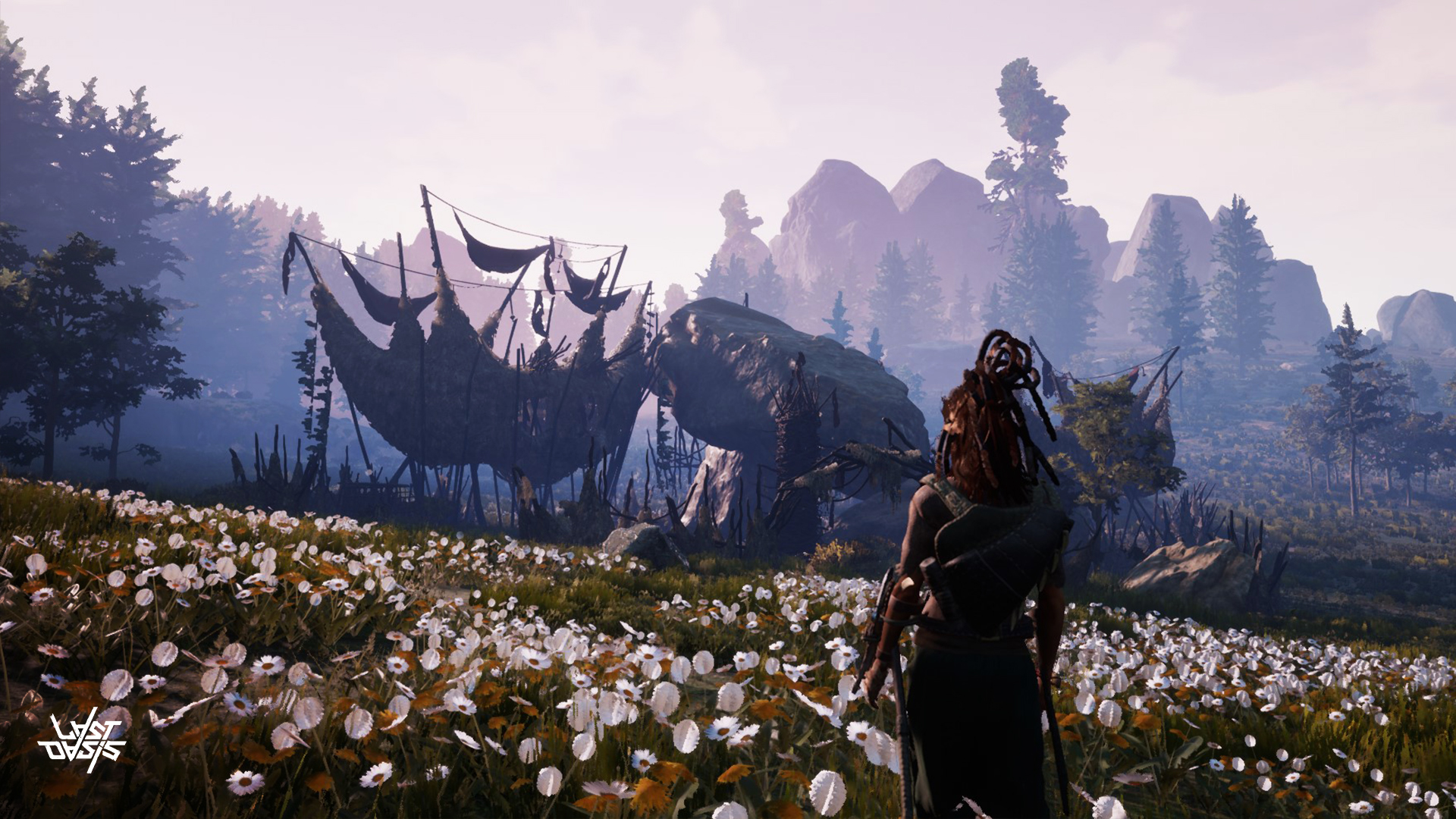 As a result, Last Oasis harkens back to the nomadic lifestyle our ancestors once all took part in – picking an area and living off the land for a short while and then moving on to greener pasture. You can never really sit still in Last Oasis, and that intrigues me. I really enjoy building an elaborate base and fortifying it over time – a friend of mine and I have over 1000 hours in ARK doing just that, and while we built on lawless islands, our structure in Atlas was rather cool while it lasted. But the idea of building a walker to store my goods and constantly move from one place to the next adds a degree of uncertainty to Last Oasis I’m interested to check out.

Thankfully, you can still build regular structures should you choose to do so, and Last Oasis will actually let you pack those up and save the layouts for future placement. It’s a cool feature that makes it seem like the hard work you spent building a structure won’t seemingly go to waste.

If you build it…

The centerpiece of Last Oasis, though, is inarguably the walkers. These walkers look like giant wooden insects really, each one bigger and more elaborate than the last. Each walker serves a different role as well, with some being good for shipping trade goods to the nearest outpost, while others are more capable as gunships, holding their own in combat against massive enemies you’ll encounter out in the desert.

Our demo showed off a few walkers, but the giant Hornet is what really stole the show. The massive walker allowed the team at Donkey Crew to tackle a fight with a giant bug out in the middle of the desert while traveling to a nearby oasis. The team loaded guns on the sides of the hornet’s deck, and in order to even board the thing each member needed a grappling hook to swing onto the massive top of the walker. The thing looked impressive, and it reminded me, again, a bit like the giant Galleons and Brigantines in Atlas I piloted early last year during my early access review. At indeed, the similarities don’t end simply with the broadside combat – these things can take ages to build. During the presentation the team mentioned that for a solo player – which to be fair most solo players won’t be building a Hornet or another of the larger walkers – it would take potentially weeks to gather the resources necessary to build one. For a guild of a few dozen people all working toward that goal, it could be done much quicker.

And it’s actually here I have my first real concern about Last Oasis. For many players, solo gameplay is how they relax. They don’t want to play with other people, or even if the do it might be simply with two or three of their friends. When I asked what  the team was doing to ensure that players didn’t feel penalized or disadvantaged for playing solo or in a small group, the team didn’t really answer the question directly, instead providing a  story of how Stannis, one of the producers of the game, became rich because players harvested resources on his claim which rewards the claim owner a portion of the resources. And that’s a cool feature – it does reward players for working together, but it doesn’t exactly give me a lot of hope that solo or even small groups of players will be able to thrive when they play Last Oasis compared to the large groups and guilds.

Combat in Last Oasis is very much skill based, which is a nice touch. Instead of spamming keys and your mouse, you have to think about how you attack or block. It’s very much directional, having you hold down the mouse button and drag your cursor in the direction you are swinging. Blocking operates along the same lines, forcing you to block an attack from the right direction. It gave me For Honor or Chivalry vibes – albeit to a lesser degree than those games which also have directional based combat. Watching Stannis attack and block the animations didn’t look entire fluid, but to be fair this isn’t the full release, so there’s hope that they may be improved during the Early Access period.

Resources are important in any survival game, and with Last Oasis you have your standard resource gathering and survival mechanics. You’ll find wood, stone and more to craft items and structures to survive in the wilderness, and resources such as water play a central role in more than simply being something to drink. Water powers your travel, meaning you’ll need it to keep those magnificent walkers…walking. Finding resources wherever you end up as you race against the sun will be central to surviving long term – and it’s not just the environment you’ll be fighting against. Other players can plunder your walkers, bases and more, stealing your resources as in other similar titles.

You’ll also fight over the  very land you’re living on. Claim structures can be placed, claiming the area for 24 hours for your group. This claim can be – and will be contested by other guilds and players, meaning that you can’t just rest on your laurels. Once the claim structure is placed, you’ll have a 24 hour window to gather and more to prepare for an assault. While the question was asked whether you have to place another claim structure – a huge piece of construction that will take time and many resources to build – every 24 hours, the team did make it clear that this mechanic is meant to keep the game moving. In a world where you have to be nomadic, the idea of turtling on a claimed piece of land feels out of place in my opinion, and it seems that sentiment has been built into the very fabric of Last Oasis.

At the end of the day, Last Oasis seems to do some very new things. I like the idea of the walkers and the fact you have to keep moving in order to truly survive in this world. A nomadic way of life seems intriguing in a survival game – it’s a playstyle I’ve not really experienced in my thousands of hours playing the genre across multiple games – and the mechanics seem built around this very concept. While I’m not excited to hammer away at trees and stones for hours to build these walkers – especially since I usually play these types of games with a very small group of friends – I am eager to check out Last Oasis for myself when it hits Early Access on March 26th.