Have you ever wondered who would win in a fight between the Norse Vikings and Japanese Samurai? What about if the Aztecs fought the Mongols? Would the Ancient Egyptians get along with the Mayans and build pyramids together? These are the kind of questions you can explore in Humankind, the upcoming game from Amplitude Studios who are best know for their Endless 4X games like Endless Space and Endless Legend.

In Humankind, Amplitude Studios is changing up their typical typical 4X gameplay by focusing on the real historical cultures of history rather than a sci-fi or fantasy setting. The twist is that you can meld one culture into another one as you progress through the eras, like the Babylonians becoming the Huns. This allows for literally a million different combinations of cultures to explore across six different eras in Humankind.

This past week, I got hands-on with Humankind's first OpenDev Scenario 1: the Towers of Babylon. OpenDev is Amplitude's new approach to feedback and community-driven game development that lets players have a taste of Humankind while providing feedback back to the developers. This first scenario focuses on city-building and the economics in Humankind.

This first scenario was very different from the preview event that I attended in June. Unlike that event, there were no enemy factions around the map. Instead, the focus was on building up the city of Babylon. Since I didn't have to worry about combat, I was free to explore the map to my heart’s content. The only things to fight were the local creatures, like woolly-mammoths and deer. Which was fine for me because I prefer to just avoid combat altogether and instead focus on developing my city’s economy. 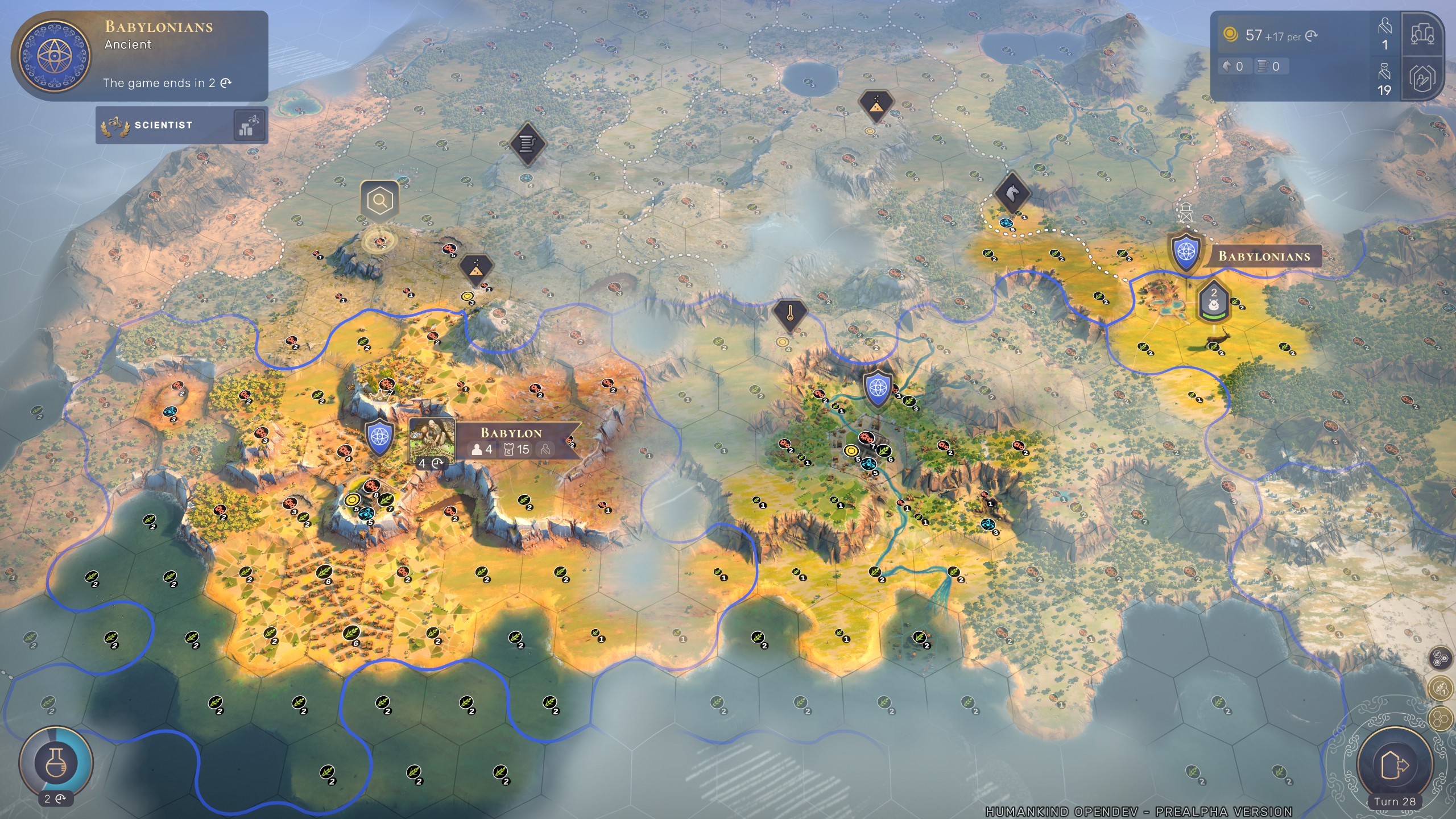 There were some small quality-of-life changes that I noticed that made developing my city easier to manage. For example, when building a new expansion onto my city - like a Makers Quarters to increase manufacturing, or Farmers Quarters to increase food production - the most beneficial spot will display a large number over it showing you the affects of building in that location. This doesn’t necessarily make it the best spot, but it will give you the most bonus for that expansion’s resource generation.

This made deciding on where to build my expansions a lot easier. I really appreciate this feature, because it also shows what effect new buildings will have on nearby expansions and made expanding my city less of a worry. The key to success in any 4X game is having a strong early-game and maximizing your resources and resource generation as quickly as possible. 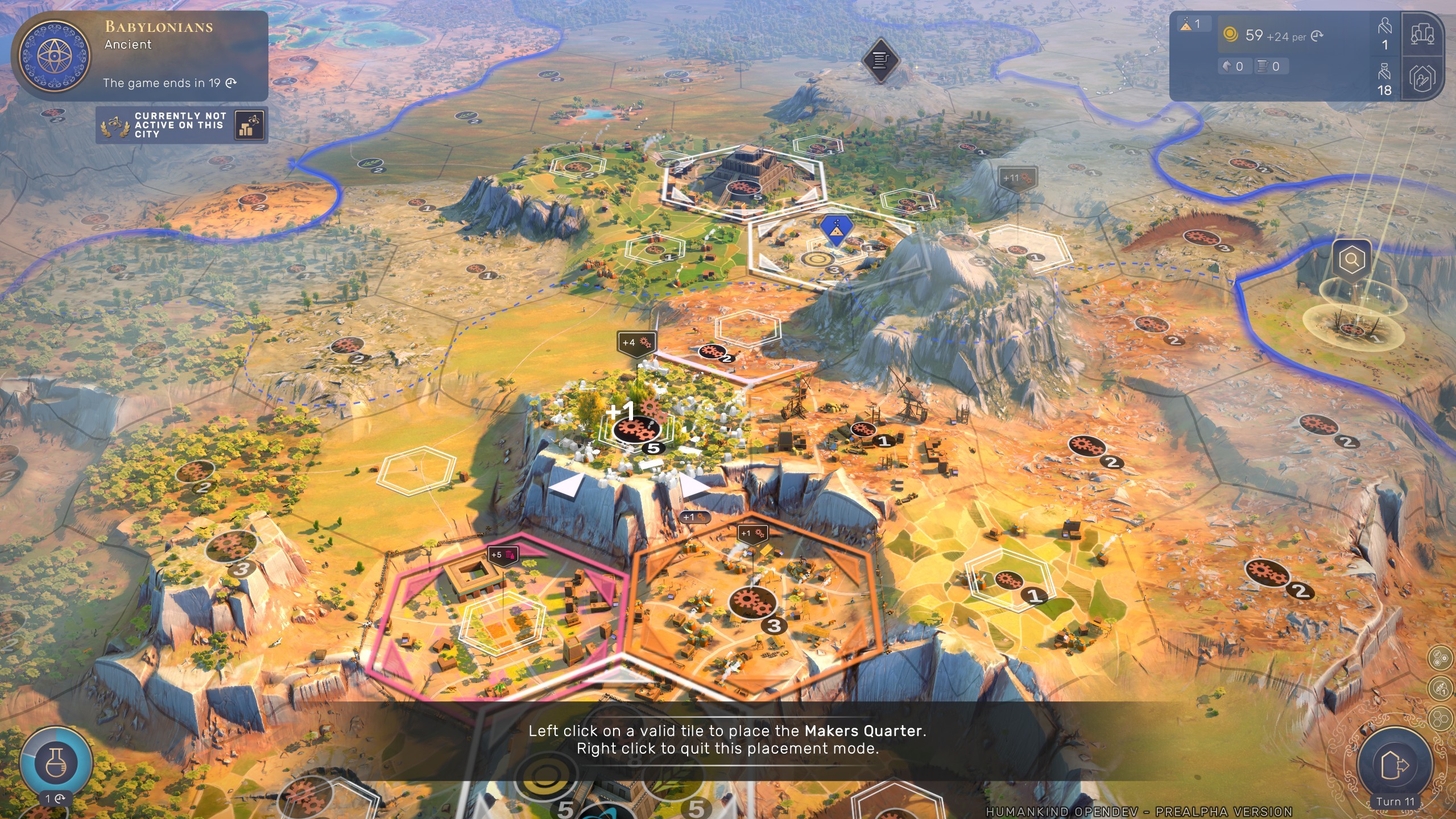 There is a fine balance to managing your economy, and I appreciated the opportunity to be able to solely focus on that one aspect. I hope there will be a campaign, similar to how Age of Empires did theirs, that will take me through scenarios in which I can learn how to better build my economy and utilize my expansion-building. Right now, it still feels like a lot of guesswork for what I need to be focusing on – often to find out after several turns that I’ve been mismanaging my resource allocations all the while!

Although the map was static for this OpenDev Scenario 1, it will be randomized when Humankind launches next year. I had fun exploring around the map regardless. One feature that was expounded upon since the preview event were the little Discoveries scattered around the map. These golden, shining icons on the map are displayed via a magnifying glass icon. They offered random bonuses when I had any of my units walk over them. These bonuses primarily consisted of either free money or research points that helped expedite my city’s current research goal. I made it an effort to create as many scouts as possible and utilized them as runners across the map just to collect these Discoveries for extra resources.

At one point, I even discovered other units on the map that appeared as vagrant wanderers and who instantly joined my ranks. During my interview in June with studio head of Amplitude Studios and Creative Director on Humankind, Romain de Waubert, he said that there is a “concept that we have where you can give them territory if you want them to settle down. Then that would be an army or a country affiliated to your own.” It doesn’t look like this feature has been implemented yet however, and instead the wandering units just assimilated into my army.

There wasn’t much point to having a standing army during this OpenDev Scenario however, as there were no obvious benefits to fighting the creatures. I did notice that after a few battles I was rewarded with extra Money. If this is an intended result of fighting, then it can be a great method to buyout units or expansions for the city in the early-game. From my point-of-view though, it was still more beneficial to utilize my runners as explorers rather than as fighters. 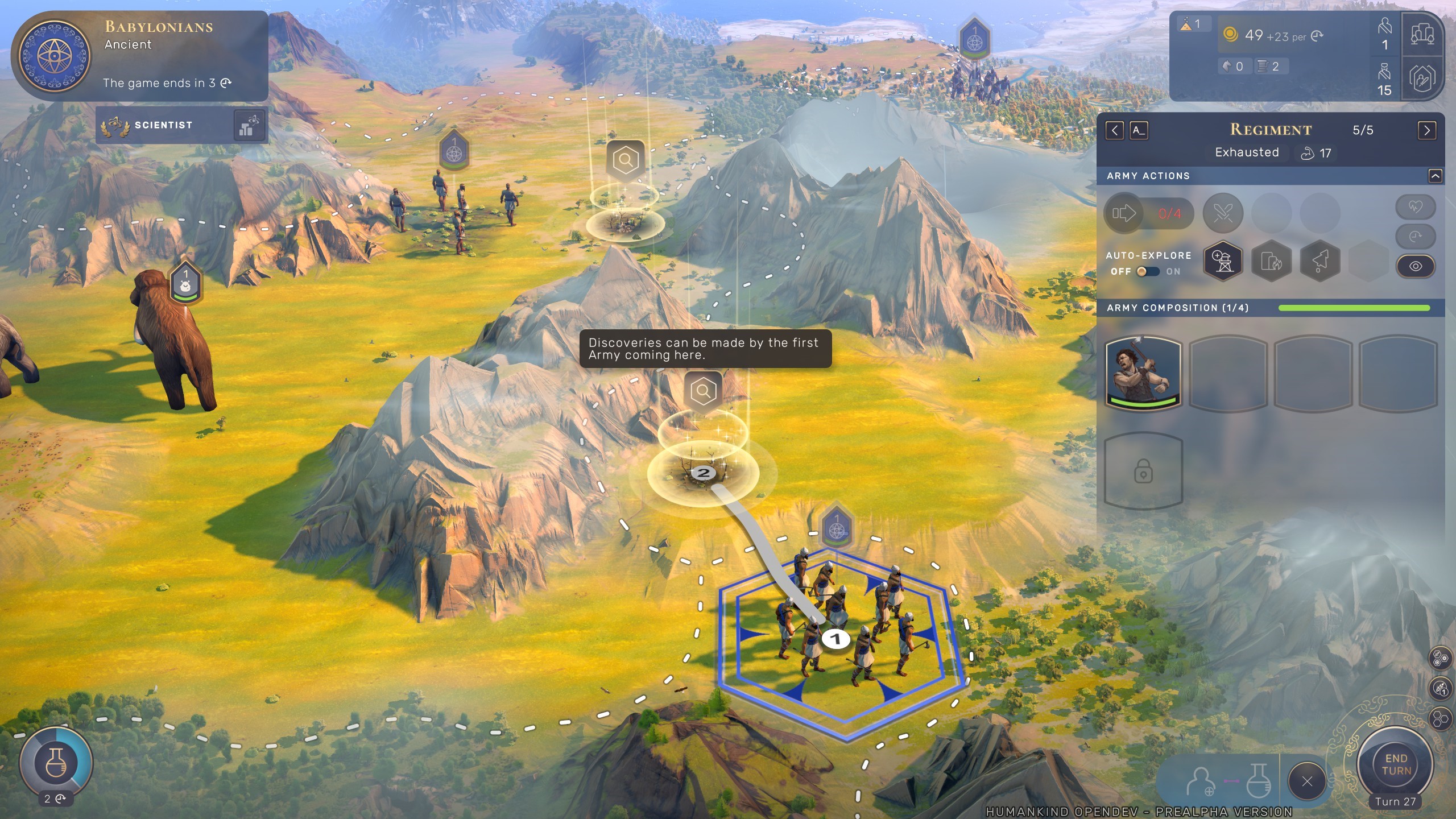 Yet More Progress Still to Come

The main feature that was missing in the OpenDev scenario from the preview version of Humankind was the Fame system. I liked the Fame system for providing target goals for developing my city, like creating a certain number of expansions or adding a certain amount to my Population. Without it, I felt like I was aimless during this scenario. Going for that high Fame score provided an easily-comparable measurement of progress. With Scenario 1 being limited to only 30 turns, I replayed it several times to try and build a better and more successful economy.

The Scenario was only limited to the Babylonians at this time, which are a science-oriented culture with a unique building called the Astronomy House. This building adds both Food and Science production and is great for advancing Technologies and maintaining a high population. It was a perfect choice for building a budding economy, but I can’t wait to play through more cultures and create unique combinations of cultures to advance a unique civilization all my own.

There is still a lot of work to be done in Humankind, but the quality is exceptional for being such an early build specific to Amplitude Studio’s OpenDev platform. There were occasional graphical hitches, like buildings floating off the edge of cliffs, but the world looked and felt vibrant as I explored it and there were never any game-breaking bugs or crashes that I came across. Although, I did find it humorous that my city was more populated by animals than people. There were even several little lions running around chasing my little citizens around the city.

I am excited for more opportunities to play Humankind and to experience new Scenarios as part of this OpenDev project. Just this small taste of city-building over 30 turns wasn't enough to satiate my thirst for 4X and strategy. The biggest complaint I have about Humankind is that it's not out yet. At least Amplitude Studio's Endless Legend and Endless Space series are also fantastic 4X games that can stem my craving more more of Humankind.