Civil war rages amongst the charr. Bangar has claimed our defeat of Drakkar as his own and raised an army to aid him in his goal of controlling Jormag and the fate of the charr. Aside from if anyone believes Bangar can control an Elder Dragon, what’s at stake is whether the char remain open and work with the other races or if they revert to being insular and cut off from the other races, except when fighting against them. It’s a fight for their future, as well as the future of everyone else in Tyria.

Drizzlewood Coast is quite a different type of map for Guild Wars 2's PvE content then we have generally seen. It is the frontlines of the war between the army Bangar has raised, with Ryland and the Steel Warband at the center, and the rest of the four united legions: Ash, Iron, Blood, and Flame. Two main lanes need to be progressed to move the meta event forward. There are events where players need to help raise troop morale by doing various things in camps in bases to help everyone out. Some of these things are familiar, like healing NPCs or giving them food/water while others are new. How much morale the troops have will influence if they are ready to push the next base or not.

A lot of the influence for Drizzlewood Coast comes from the way WvW maps work. However, instead of fighting against other players, we are fighting char NPCs, which makes this map an excellent introduction to WvW concepts for players who have perhaps been a bit afraid to give it a try. This map also seems to pull a lot of influence from how Strongholds worked as well. Though Drizzlewood Coast has the potential to be on a much larger scale than strongholds were. As with most map metas, it’ll probably be slow going at first until players get a feel for everything and how it works, but after a while, it’ll likely progress well as long as there are players to help out. 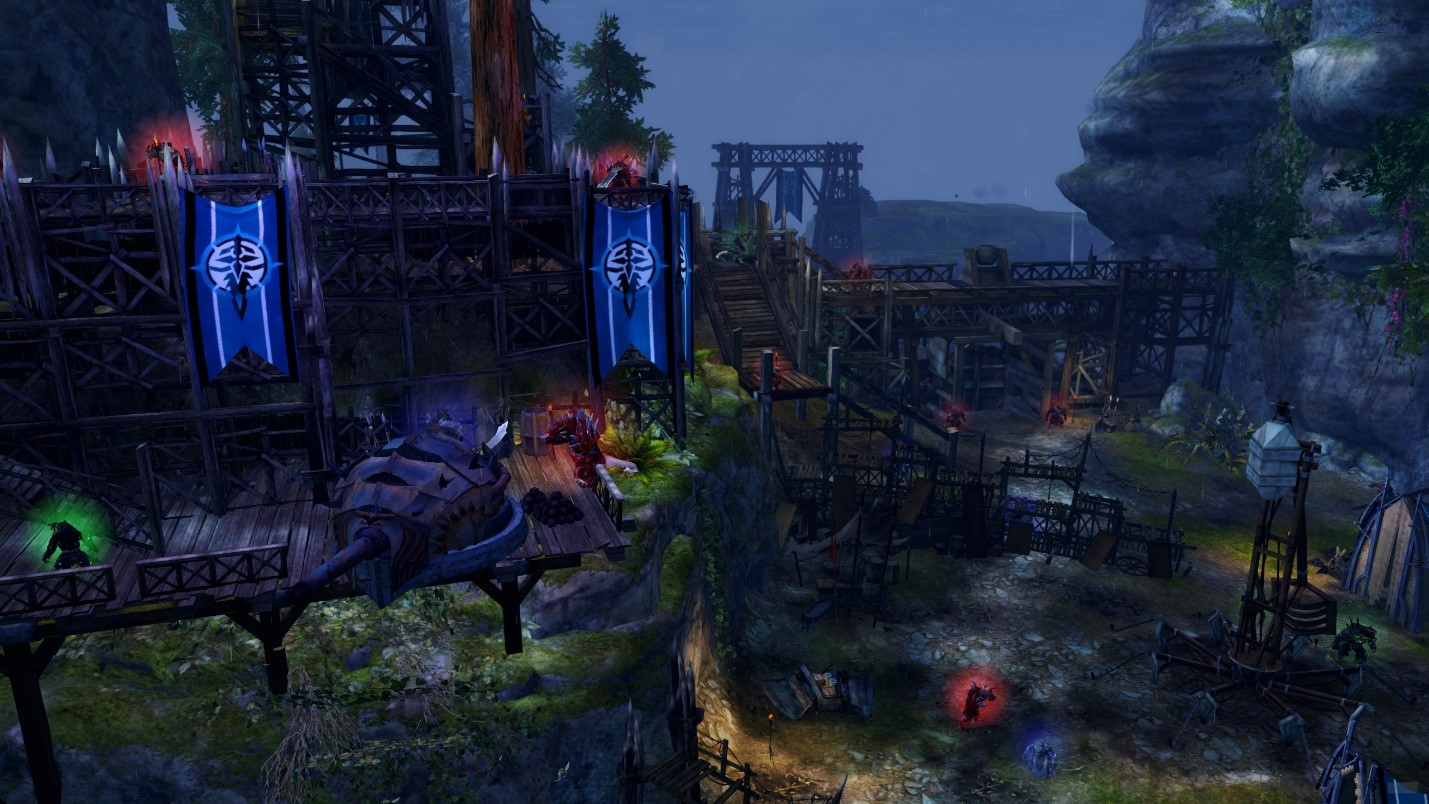 Both lanes meet-up in the northern end of Drizzlewood at the bridge, which leads to both Bangar and Jormag. This is where the Steel Warband makes their final stand to hold us off from interrupting Bangar. This last fight is crazy and full of char tanks and copters and well two large armies colliding and fighting for the future they want to see. One of the exciting aspects of this fight, though, is two members of the warband have to be fought and beaten before the third one can be dealt with. If one of the first two is defeated first, the third one just heals them up and starts it all over. It is also worth mentioning there is a 15-minute time limit to push the lanes, capture all the bases, and win the final battle. If we fail Ryland bombs, the area and the map resets.

When I first saw there was a map-wide meta, we had to fight our way through, take bases, and win a final battle on a time limit I immediately had flashbacks to Dragon Stand. I love the meta in Dragon Stand, and the whole last two fights were always fun. What isn’t fun is trying to get map completion or just generally trying to explore in that map. When the meta isn’t going, the rest of the map was inaccessible, and the only way to explore on your own was to wait for a map to win. This was often incredibly frustrating. Thankfully ArenaNet considered this when designing Drizzlewood Coast. Even when the Steel Warband controlled everything, I was able to traverse the map and explore without much more effort than I would have in any other map. The only spots I couldn’t get to on my own were inside bases we didn’t control, which is an entirely fair play. 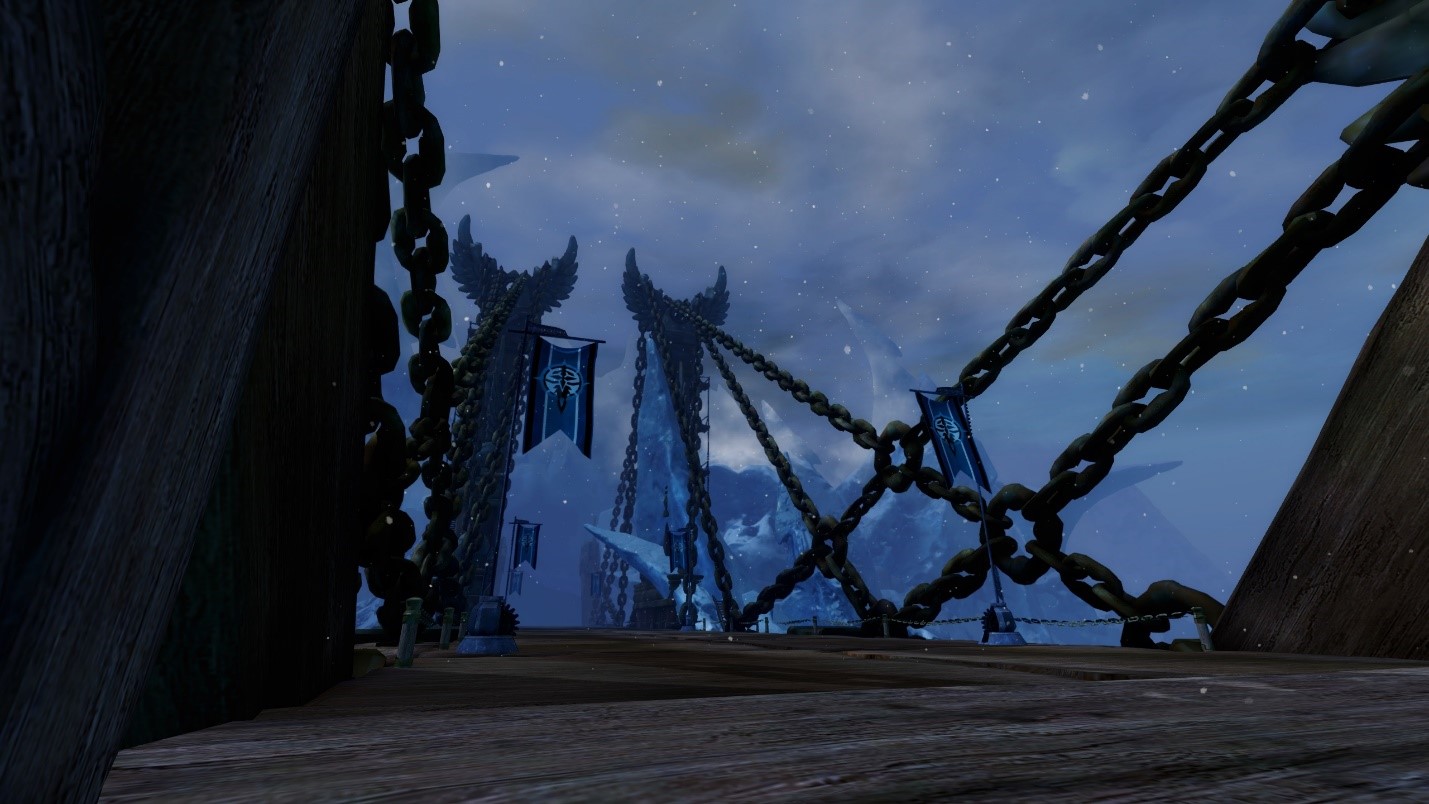 So, the strike mission has a lot to do with the storyline of No Quarter, and it is impossible to talk about who we’re fighting or why without spoilers. I am just going to focus on how it’s set-up and what it was like to do it rather than all the juicy story bits which are involved in it, although the name is a bit of a clue. Seriously though… things get crazy!

The first part of the strike mission is a wave event where the point is to see how long your team can last before you fall behind and get overrun. At least at first most groups will probably only make it through a few waves, though more organized groups will probably find this part more comfortable than less organized groups. The longer you last, the more reward chests are received at the end of the strike mission. The group I was with got overrun quickly, but once that happened, everything we were fighting was quickly cleared away by the actual boss of the Strike mission, which was crazy and fun.

I have not spent much time doing the other strike missions, they are fun, but I do not personally feel a draw to keep doing them. However, I can see myself doing Cold War a lot because I liked the format and fights. I also like the first phase of the mission, where it is a “see how long you can last” and is a good indicator of how well a group is working. Additionally, I like that it is relatively short—just the wave part and then one boss. 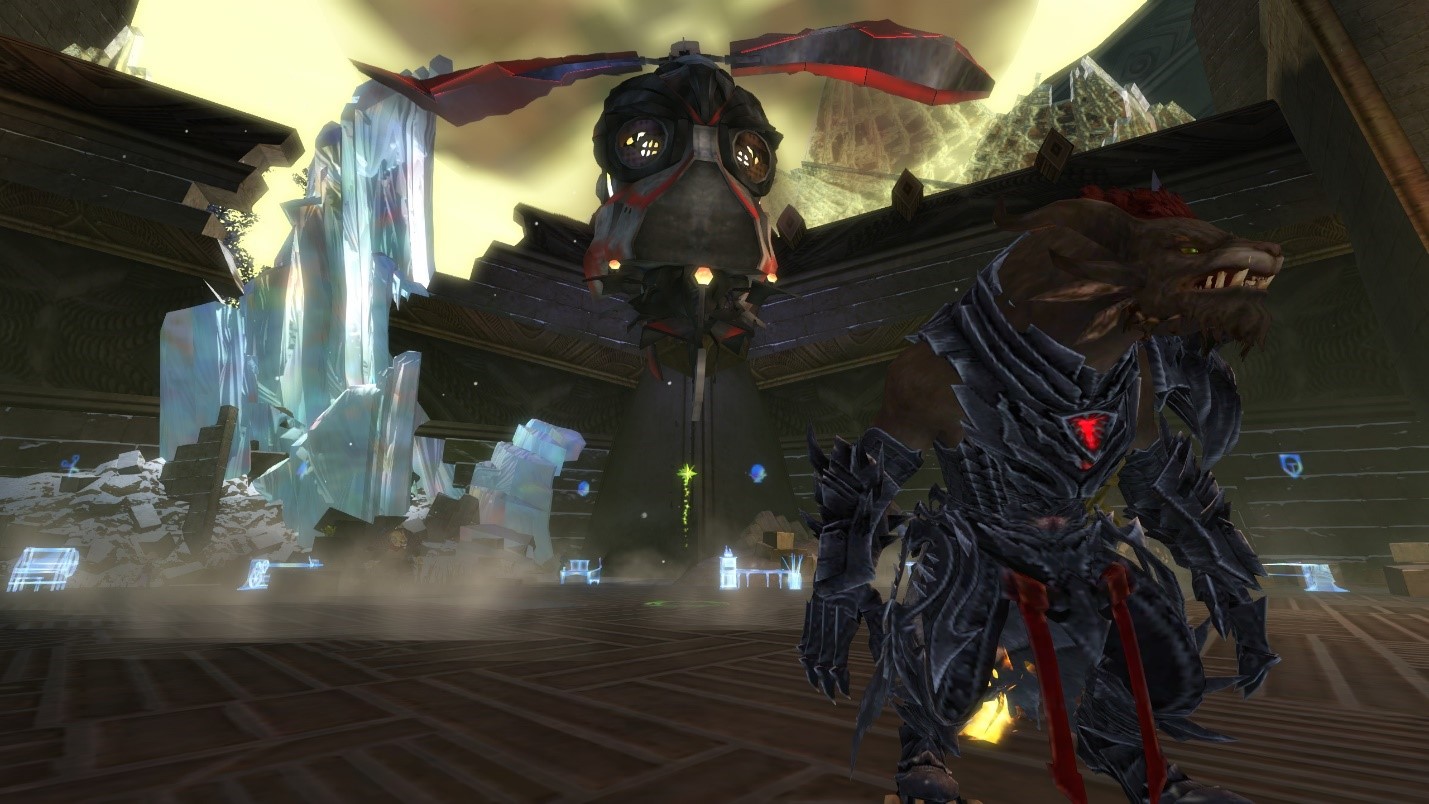 I was disappointed to hear this update would be launching without VO. It’s just always well done, and I like not being pulled between looking at what is going on around me and having to read the dialogue. I was considering waiting until the VO has been added to play this story on the live servers. With this in mind, during the preview, I asked if they have an estimate on when VO will be added. Sadly, the answer is they don’t have any idea about how long it will take. The problem is with COVID-19 still in full swing; it isn’t safe to bring people into the studio for recording. Also, remote recording isn’t an option because sound quality can vary greatly when doing that, and they often have people record their lines together, which helps interactions feel more real.

It is very noticeable not to have the VO implemented, though. There is just no replicating that. However, the sound team did an excellent job of inserting sounds for each character to help get across the feelings expressed in all of the dialogue. Additionally, the voices for all of these characters are so ingrained in my head I could hear what they sounded like as I read the conversations. The reasoning for going without it makes a lot of sense, though, and it is worth noting anyone waiting on VO to play this update might be waiting for quite a while. 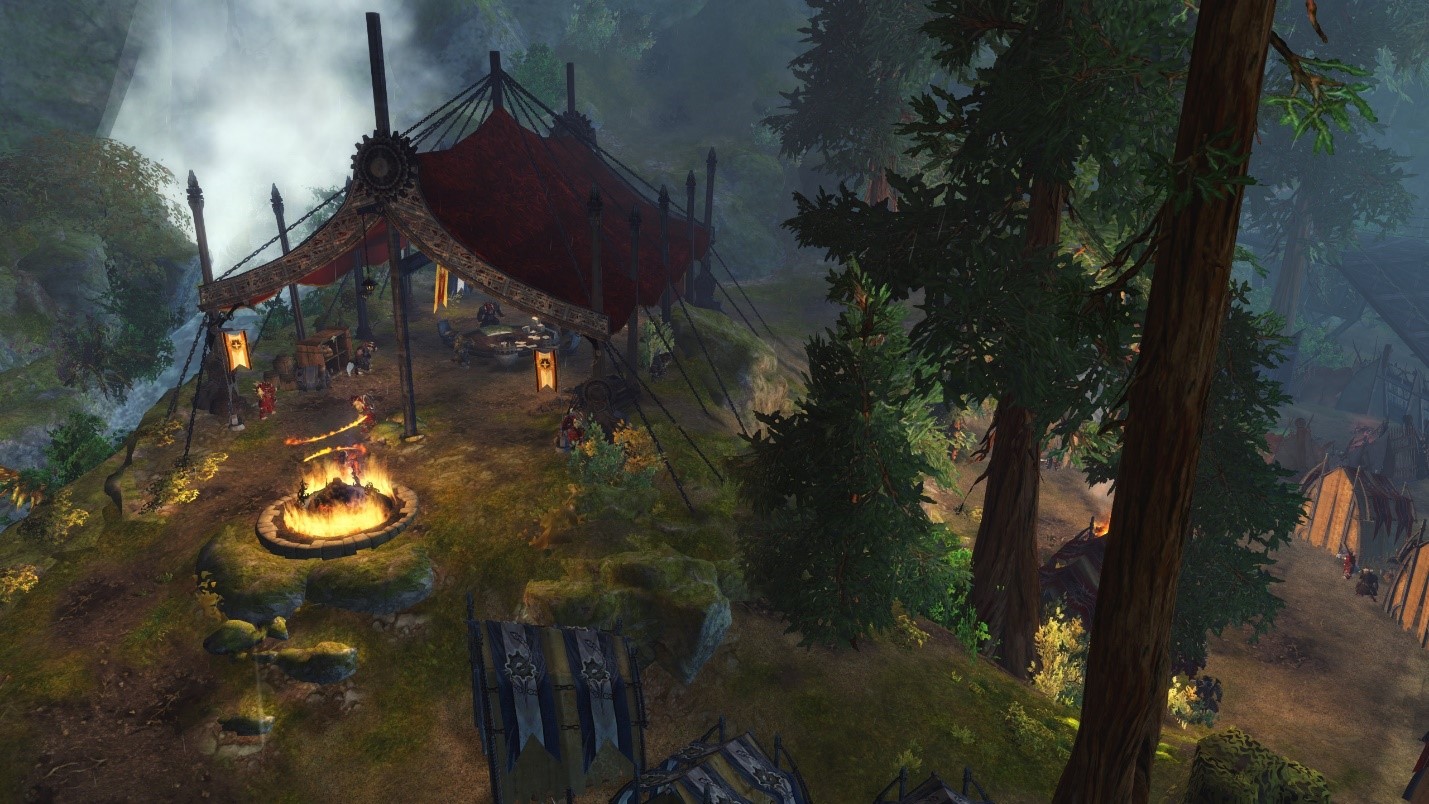 Going into this episode, I had quite honestly forgotten the Flame Legion had rejoined the char, so I was confused at first why there were four char legions. So, I guess it was a good thing they were brought back in again. It was also terrific to see Logan and Kas pop-up again as well. It turns out Queen Jenna did not forget the aid she had been given in dealing with the White Mantle and sent those two and some seraphs to aid in the fight. This, of course, causes Bangar to reassess his position and decide a truce would be better than fighting against humans… yea, no, he pretty much thinks fighting alongside humans is a disgrace.

All in all, this chapter of the story is well done, and I like how the tasks to complete it are woven in and around the meta event. I also really like the fact the essence mastery was carried over to this map and expanded upon. It would have been disappointing just to abandon that mastery all together when we left the last map. I can’t wait to see what everyone else thinks of this chapter and the new map meta!