It’s been almost seven months since ArenaNet started the Return of Guild Wars 2’s Season 1 content with the Flame and Frost update. I can honestly say I thought it’d take longer to get all of Season 1 back out the door again, but I’m so happy that we are here at the final update. I was also able to get a sneak peek at this new story chapter, so let’s check out the new developments for Episode 5.

The Battle for Lion’s Arch picks up right after the conclusion of the marionette fight as we explore a lair of Scarlet’s, located near the Priory’s headquarters. If you want the authentic experience, join a public or private group to fight the marionette before starting episode 5. If it’s been a while since you’ve done that or you haven’t tried it since it was brought back, it would be a good refresher as a lot of the conversation revolves around that fight and what the gang has learned from it and Scarlet’s other endeavors.

There was much more dialogue in this update than I remember regarding Scarlet’s possible motives. For example, there’s a whole sequence in the Dead End (Marjory’s Bar) where we review items and information we’ve gathered while dealing with Scarlet. Some items we gathered before we knew Scarlet existed at all. I might vaguely remember this sequence existing before, but I don’t believe it was voiced or as extensive. For one thing, I don’t remember it ever being explicitly stated before how Scarlet got the various factions to work together, but in this update, there is an actual explanation given. Questions about how she managed the alliances she did have always been one of the main criticism of the storyline with her, so it was really good to see that expanded on a bit.

Of course, before too long, Scarlet launches her attack on Lion’s Arch, and havoc ensues. During the first instance when she launches her attack, the Commander focuses on helping various areas of the city evacuate. In addition to attacking the city, Scarlet has released a miasma that is slowly spreading around Lion’s Arch. The first big goal is getting everyone out before it reaches too high of a toxicity level. It was incredible reliving this experience because GW2 is the first MMO I’ve played where a city has been completely destroyed in the course of the storyline. I hope players who are experiencing all of this for the first time, it’s as incredible of an experience for them as it was for me.

After completing that instance, it’s off to Gendarren Fields to regroup and devise a plan of action. I had completely forgotten about the heal-o-tron subplot in this section, but it’s pretty amazing to watch. I’ve always been a fan of heal-o-tron in all of his various iterations so I might be a bit biased there. This section is a lot of character-building with not only some of the key members of Dragon’s Watch but also a bunch of the side characters. Overall, I’d recommend listening to everything at least once and exploring a bit. 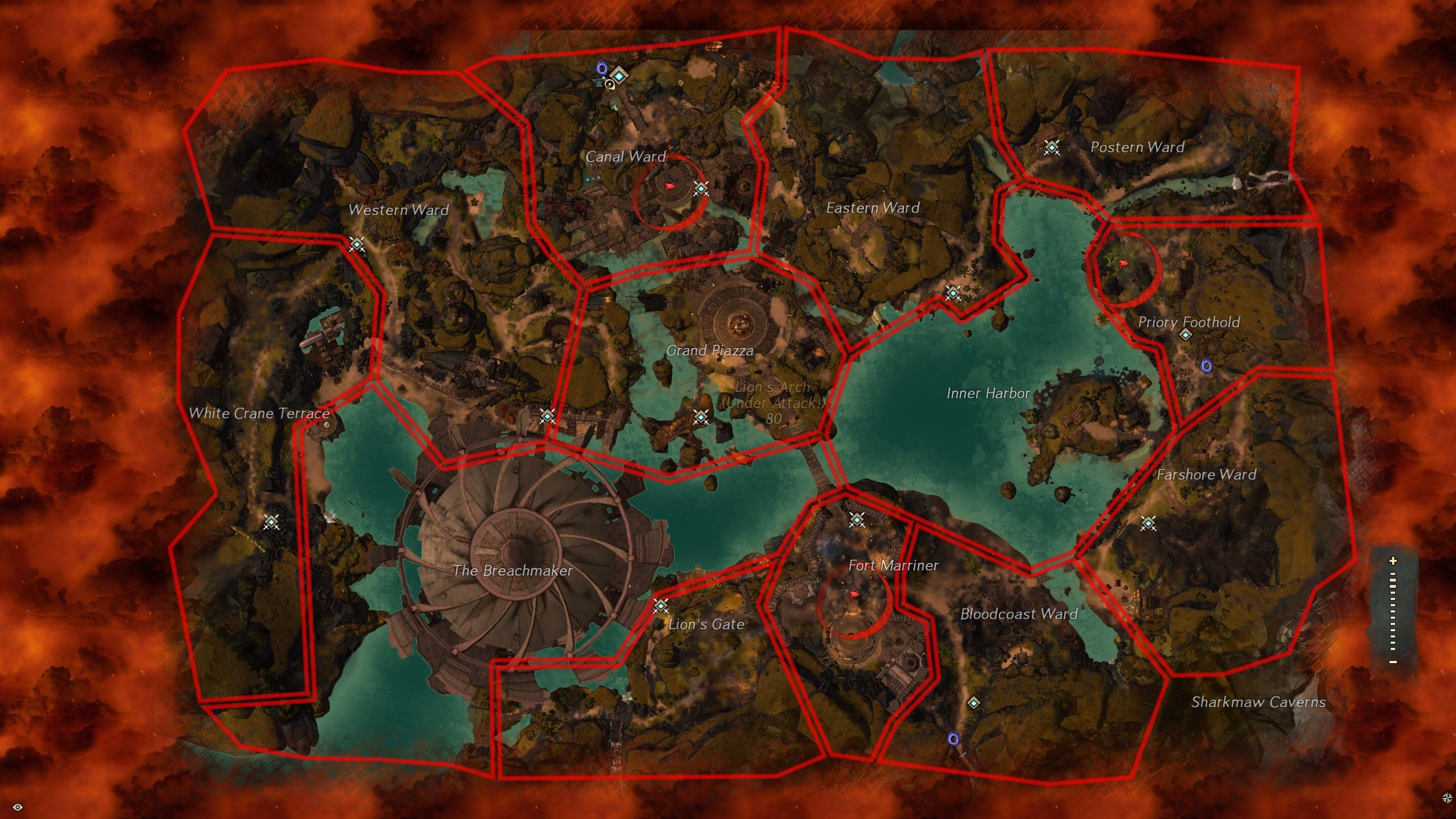 Going into the Battle for Lion’s Arch, one of my big questions was how they would handle taking back the city from Scarlet. They handled it very similarly to how they brought back the marionette fight and how Drizzlewood Coast works. Players can queue for a public or private instance of the Battle for Lion’s Arch, and once you get in there, the map is broken up quite similarly to Drizzlewood Coast’s. When I took a section back from Scarlet’s forces, I noticed that the section I recovered turned blue on the map. I was slightly disappointed that it didn’t seem like a need to defend the areas once they are taken back, but getting people to play defense is often impossible, so I understand that choice. Moving through the city and fighting off the Aetherblades was a bit slow going, but it was also a lot of fun. Weird to see the old city destroyed again, though.

This entire episode was a joy to play through, and I can’t wait to do it again on my own character and account. Making all of Season 1 available, was a huge task, and ArenaNet has done it well. No matter when you started playing Guild Wars 2, you’ll be able to experience the full storyline, and that’s a huge deal. It’s been a joy to experience this ride once again.