While much of the gaming world (myself included) has been anticipating the arrival of Assassin's Creed: Valhalla (check out our review in progress) this week, I have been keeping my eye on another game as well - the PlayStation 5 and PC exclusive action RPG Godfall. For those unfamiliar with the game, Godfall is a third-person melee focused looter-slasher from Counterplay Games and Gearbox Publishing. When you hear that Gearbox is tied to the game, it’s easy to speculate that Godfall could just be a reskin of the very successful Borderlands franchise.

There’s still an empty spot on my TV stand where a PlayStation 5 would go, but I was able to get a PC copy of Godfall ahead of its release on Thursday. Even though I’ve only put a handful of hours into the single player story so far, I can assure you that Counterplay Games has put together an aRPG all their own. While players are sure to find parallels between the two games Godfall isn't just a Borderlands 3 knock off sans guns. Welcome to my Godfall review in progress

Can I Run Godfall?

When  the PC system requirements we're announced last week, many were surprised by the beefy minimum specs. With much of the low end PC market still shipping with just 8GB of RAM, gamers were quick to balk at Godfall's need for 12GB. I know from past experience there's often a little leeway in the need to meet the minimum specs, but in this instance that isn’t the case, or is it? 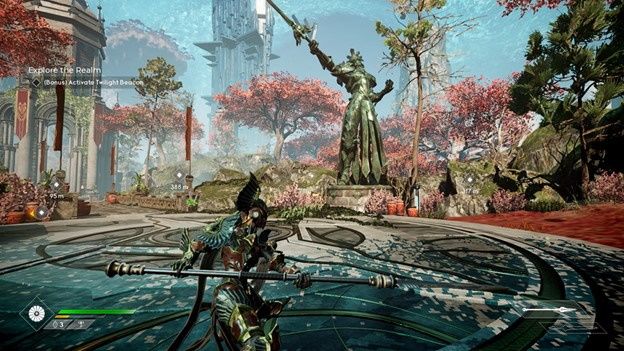 Low settings lose all the detail a PC player is looking for.

It just so happens that I have been checking out a pre-built system with a Ryzen 5 3600 CPU, 8GB of RAM, and a Radeon 5500XT with 4GB of VRAM, so of course I had to give it the old college try. Even though this system is below the minimum specs in multiple areas, Godfall loaded up just fine, but I wouldn't say the game ran well. At 1080p, with all graphic settings lowered to medium, the in-game benchmark barely averaged over 40 frames per second. Dropping everything down to low settings did result in a 55 fps average. Unfortunately, both tests had frequent video stuttering even with just one or two monsters fighting on screen. Low settings also had an atrocious draw distance with objects popping in and out of the picture, even when standing still. There's no telling just how bad this will get during actual gameplay like complex boss fights, nor do I have any idea how much additional strain co-op play will have on a system below minimum specs.

Epic settings for an epic view.

In contrast, my main gaming rig (Ryzen 7 3700X, 32GB RAM, and Radeon Vega 64) gave much smoother gameplay. With all settings cranked up to Epic, my aging graphics card still managed 59 fps at 1080p, with 1% lows at 50 fps. When I jumped up to 3440x1440 resolution with Epic settings I wasn’t able to break past 40 fps, though dialing down to High settings yielded a much better 53 fps average. I found actual gameplay to run a few fps lower than these numbers but even in heavy combat I didn’t encounter any stuttering.

You have to admire Counterplay games for setting a realistic minimum to achieve smooth gameplay instead of hiding behind a "it still plays" response when players start to complain if they set the specs lower. I would wager that with the increased power of the PlayStation 5 closing the gap between console and PC performance this won’t be the last game to target the mid and high tier gaming PC markets.

So I Can Run It, But How Does It Look?

I know what you’re worried about (or hoping for) and no, it doesn’t have the same graphic style as the Borderlands series. Counterplay Games has gone for a more realistic visual look with Godfall, and I love it. Each area, or Realm, has its own color palette and aesthetic, but they are all vibrant, living areas full of rich details.

In the tutorial you must search out the Sunforge Temple and defeat the Guardian. After just a few seconds it's easy to see why it’s so named, with the whole temple engulfed in a gold hue.  Everywhere I looked the overpowering sunlight saturated the area. Everything was so bright it almost hurt my eyes. I was beginning to think I had borked my monitor settings.

All that glitters is gold.

Once I completed my mission and made my way to the Seventh Sanctum, and then on to my first real mission, I realized that was the intended effect. The first area past the tutorial - the Earth Realm - replaces the gaudy look of the Sunforge Temple with a more natural, yet still vibrant, rocky forested area. Trees with a mix of brightly colored leaves sway to and fro against a backdrop of an ancient citadel perched on the side of a giant cliff. There is a film grain effect that muddies things up just enough to maintain the detail level while giving the backdrops an oil painting look.

Up close that same attention to detail gives foliage and rocks a high level of realism. Just like an actual Birch tree, the white bark looks as though it is peeling off. Rocks and boulders are covered in various textures and colors with lots of cracks and crevices giving them an authentic look. Even when you start to lower a few of the graphics settings everything holds together well. Once I started lowering everything below medium settings things started to deteriorate quickly, though you can’t really expect more out of the lowest settings.

My biggest complaint with the graphics so far is the lack of a free roam camera. There really is so much to take in and the only camera view is locked directly behind your character. The couple of armors that I have unlocked thus far are really cool, but between your butt being in the way and foliage blocking even more of your view if you pan the camera up, it makes it very hard to get a good screenshot of your surroundings. This may not be a big deal to some, but I know several people who enjoy documenting their adventures with screenshots that will find this extremely annoying.

So It Looks Good, How About Character Progression And Combat?

As far as gearing up goes, everything is centered around your suit of armor, or Valorplate. Each suit, all of which are highly detailed and look amazing, adds additional strengths and perks to your avatar’s arsenal. Every set of armor brings with it a specific combat style or elemental effect. The unimaginatively named Phoenix Valorplate, for example, boosts fire damage while the Silvermane Valorplate is focused on enhancing combat techniques. The remainder of your gear - rings, banners, and all the other standard accoutrements - help to further complement your armor and weapon choices. There’s really nothing new to see here, and anyone familiar with the typical rarity color grading scheme that all developers are unwilling to diverge from (if it ain’t broke, don’t fix it I guess) will feel right at home. 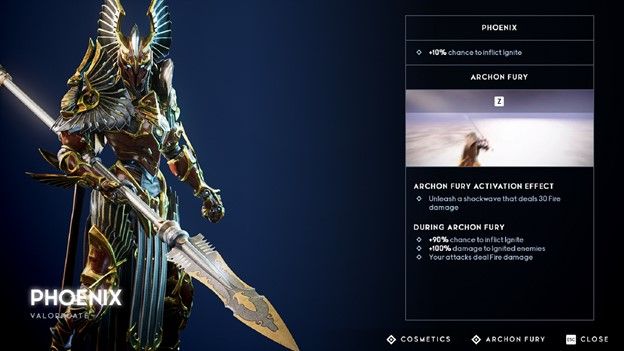 So far combat feels smooth and each weapon conveys a different feel and style to your attacks. I haven't had a chance to dive too deep into the weapon and armor combinations available, but I can already see the opportunity for multiple builds that can be tailored to the specific area you plan on entering. Layered on top of that is a simple but effective skill list and gear augmentation system that should keep players busy for a while.

The final piece to the character build puzzle is choosing your avatar’s skills.. There are a total of 25 skills to choose from as you level up.. Each skill can be upgraded to a maximum of five points, with each level adding more utility in the form of better stats or additional abilities.

Get good or get hit.

When it comes to the hack and slash, my first impression of weapons in Godfall is positive. Without any ranged combat (at least for the player) there has to be a variety of weapons and fighting styles to choose from. Each weapon type has a distinct feel, from the quick and flashy dual blades to the slow but heavy hitting warhammer. For added versatility during combat you are able to slot two weapons at a time and switch freely between them during combat. With the aforementioned warhammer and dual blades I have been able to kick off combat with a massive area of effect attack with the hammer to thin out the herd, then finish up any leftovers with some rapid slice and dice sword action. I've also grown fond of the medium range of pole arms while the longer rearch but slower speed of a greatsword has given me nothing but hassles.

Regardless of your equipped weapons you also carry a multi purpose shield. Capable of blocking most, but not all, enemy attacks, the shield can also be flung at enemies to inflict damage and knock them down. Your shield is the heart of the parry and stun mechanics in Godfall, and allowing its use regardless of weapon choice should go a long way in making all weapons a viable option.

So Everything Is Put Together Well, But Is It Worth Playing?

Well, that’s the million dollar question, isn’t it? So far the environments have drawn me in and the combat hasn’t pushed me away. Each weapon type changes up combat just enough to keep me intrigued by the intricacies and synergy possibilities between gear and skills. And although there doesn’t seem to be anything ground breaking in the gear and loot mechanics, I’ve barely scratched the surface and am hopeful that Godfall will have more depth than some of the other looter games out there (I’m looking at you Anthem, you broke my heart).

Keep your eyes on the prize

Overall, my first impression is that by focusing on melee combat Godfall brings a fresh look to the looter genre. I’ve only played about 7-8 hours so far, so I reserve the right to change that opinion as I continue through the story and check out what the end game and multiplayer have to offer. Be sure to check back next week when I present my final review of Godfall, where I’ll break down the highs and lows of this intriguing looter-slasher.