Between the throngs of cosplayers queuing up to try out the latest game from HoYoverse and hordes of Hellsinger players blasting away enemies, a very different test waited for us at Gamescom 2022 when THQ Nordic took us back to 1992 to introduce Alone In The Dark.

For anybody that missed the fanfare just before Gamescom 2022 opened its doors, THQ Nordic is about to take us all the way back to the early days of horror gaming, with a new AitD that promises to be everything and nothing like the original. Based on the classic horror tale that spooked up PCs back in the 1990s, AitD is not quite a remake, certainly not a remaster, and not entirely new. Instead, the team that gave us a glimpse at what’s coming with AitD described it as a love letter to the very first in the franchise, taking players back to Derceto Manor to investigate a disappearance and unravel a mystery that threatens to devour an idyllic Southern town.

Fans of the original who have seen the teaser trailer will recognize at least a few key components. Players will once again roam the halls of Derceto Manor, a home for the mentally ill, where something disturbing lurks in the shadows. You’ll find yourself playing as either Emily Hartwood or private investigator Edward Carnbyand as you take on a rising evil. So far, this all sounds like a remake, but with such an astronomical gap in processing power between the original release and now, there’s a lot of room to expand upon that first foray into evil.

While cutting edge for its time, the first release for AitD now looks decidedly dated. Titles like Turok might manage a decent enough experience with a remaster, but this early horror mystery has been rebuilt from the ground up. The recent teaser trailer shows off the horrific new take on this tale. Set in the American South during the 1920s, it builds an oppressive aesthetic that seems to take a little of Bloober’s Medium, a sprinkling of Bioshock Infinite’s Southern drawl, and weaves in a whole heap of American Gothic.  It’s a disturbing new twist that leans on far more than graphical fidelity.

THQ took the limited scope of the inaugural AitD and expanded on it in innumerable ways. While players will focus on the weird events and unnatural occurrences of the aforementioned manor, there’s a much wider list of environments to explore now. When things do spill out beyond the confines of this claustrophobic mansion the dimly lit street of downtown and mist-laden graveyards seem to hide danger in every shadow. THQ has clearly used the original game as a guide, but made plenty of key changes, using the technological leaps of late to expand the environment, add plenty of extra lore, and take the story in its own directions, for which there seems to be more than one finale. It also adds plenty of new ways to play.

Point-and-click puzzles aren’t dead. The idea that either of the game’s two central protagonists must unlock doors, search out clues, and sleuth their way out of trouble hasn’t been entirely dispatched. Anybody picking up this title will still be mostly situated in the manor, but new encounters mean there’s definitely a little bit of Resident Evil lurking in the shadows here.  While early screenshots did show Edward wielding a pistol and suggesting that this was likely to be an action-focused affair, THQ assured us that combat is more of a last-ditch effort and won’t be a viable option every time. 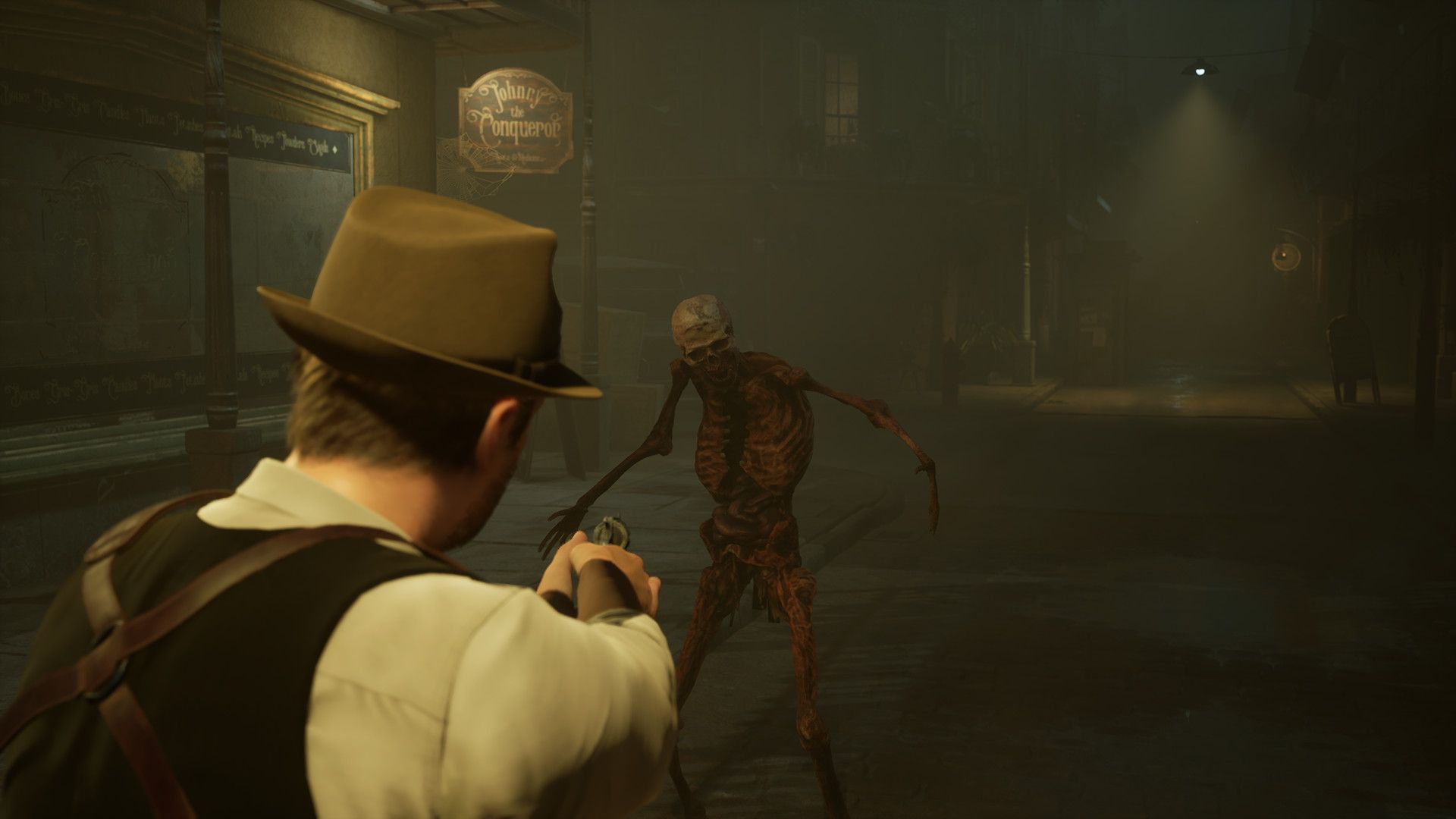 Simply put, don’t expect Resident Evil 4. Players will be able to choose how to proceed, hiding from entitles or choosing to start shooting. You’ll need to be mindful of drawing attention, running out of ammunition, and making any situation more dangerous by simply going off half-cocked against the undead. It’s a level of threat and freedom that THQ introduced into this remake to provide more opportunity for player choice, but also adds even more threat and consequence to decisions.

After all, the threat is what this Alone in the ark is all about. If you have already watched the early announcement, then you’ll appreciate THQ’s insistence that this is not a game that falls into the cliched ‘quiet BANG’ of many modern horrors. Instead, the team leaned into American Gothic to create a brooding horror. Unsettling individuals, eerie sounds, a mesmerizing doom jazz soundtrack, and even the oppressive summer heat of the American South make this small-town adventure feel claustrophobic at almost every turn. Whether it’s the looming presence of otherworldly horrors between the lamplight or the narrow corridors of the manor house, this is where THQ has chosen to tell its story. AitD looks likely to draw on some of the 90s most iconic horror elements and interlace them into a cinematic tale that should live up to its namesake’s reputation.

After our brief overview, we’re certain of one thing. This return to a genre classic has an air of expectation that’s almost as heavy as the looming evil that hangs over Derceto Manor. Alone in the Dark is due to ominously load onto PC and console sometime soon. For more on this grand return to a horror classic, you can take a look at the official website now.

Tags
alone in the dark
gamescom 2022