It’s been some time since Gamigo released their brand-new take on the traditional MMO. Twisting brave new world and a hefty hint of self-focused playstyle, Fractured Online is about to look to a whole new world for its future.

With a firm fan base surviving on what they can scavenge, loot, craft, or learn from the land, Fractured Online’s population is a hardy bunch. Now these seasoned adventurers are about to get a whole new world of content and more. The team behind this title gave us a glimpse of what’s coming up when we logged onto Gamescom 2022.

With plenty of current content explored, enemies vanquished, and available skills mastered, September seems like the perfect time for a huge new drop of content. Already extensively detailed on the Fractured Online website, the newest race to branch off from the standard human form will likely hit this MMORPG in with Early Access and these Wildfolk are unlike any centaur I’ve ever seen. Skipping through a character re roll to get into game and take a look, Gamigo showed off a form that sidesteps the cute bunny boys of FFXIV. Instead hulking bipedal beasts, lush manes, impressive horns, and distinctly inhuman shapes tower over an extensive array of furry facades. These hulking beasts are more likely to be bears than cuddly distractions, and while we didn’t get an opportunity to check out if these new Wildfolk will take more diminutive forms or friendlier faces than the stag in front of us, they are certainly an impressive change for animalistic protagonists. 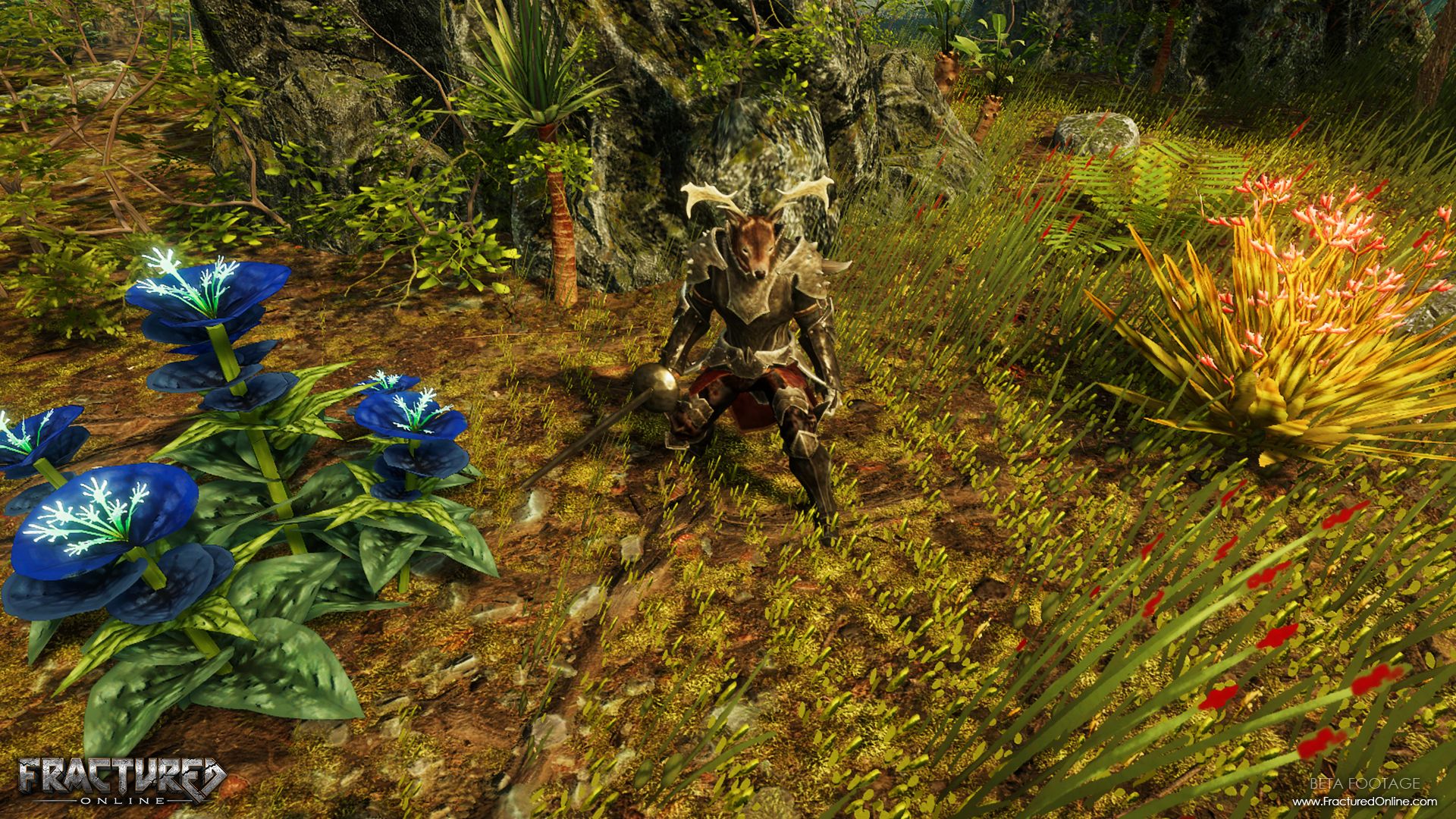 These fierce warriors are made of stronger stuff than typical humans, so players an expect an entirely new world if they chose to roll a new character. Stepping out into a mix of jungle and desert environments, these survivors will meet an entirely new set of hardship and even towering Lizardmen to battle. Brand new resources are about to unfold, and new classes to spec into. Unlike the human realms, the arrival of Wildfolk also introduces flagged PvP to Fractured. A much-requested feature, you'll be able to flag to take part in some classic MMO action across the world, rather than in city based sieges. Introducing any new PvP any MMO is always a delicate moment, it’s our opinion that this tapered escalation of hostilities makes the most sense, especially with what’s coming up next.

New worlds, new resources, entirely different trades, and new ways to fight for success are coming. Eventually, Gamigo even expects these connected worlds to come together, using portals to ferry knowledge, trade, and rivalries between landscapes. Thankfully, players won’t need to work out how to traverse realities to get a taste of another world Instead, asteroids are going to come crashing from the sky. Asteroids are another new element intended to add some spice to this world walking adventure. These new instanced environments will unlock in the near future and are a mish mash of biomes from across Fractured Online, and are certainly a much safer way to experience the Demon planet of Tartarus than actually trying to go there alone. Crafting these new adventures, Gamigo is looking to do more than simply give gamers a look at another world of adventure. Available through existing portals and spanning roughly 3 square Kilometres, these temporary maps add in a competitive element to Fractured that we haven’t quite seen yet.

City sieges might be the only real endgame for the mainstay of this new MMORPG, but asteroids add another layer to the final form of play. Explorers will find new landscapes decorated with control points. Flipping over to a vulnerable status at a pre-determined time, controlling these areas of the world come at great risk. Taking down dangerous mobs and enemy players means only the most audacious guilds will want to take on this herculean task. However, the loot is pretty sweet. Gamigo confirmed that these skirmishes all ratchet up across the course of seasons, giving guilds the opportunity to control zones and take over asteroids. Winning overall control of an hulking space rock benefits players with a cache of season points and mysterious Relics. These ancient points of power are items that can be decanted to established cities by the winning guilds and provide meaningful bonuses. Gamigo used the example of strengthening walls or buffing entire populations, making the form of in game action a critical endeavor for anybody charged with the safety of their own homestead. 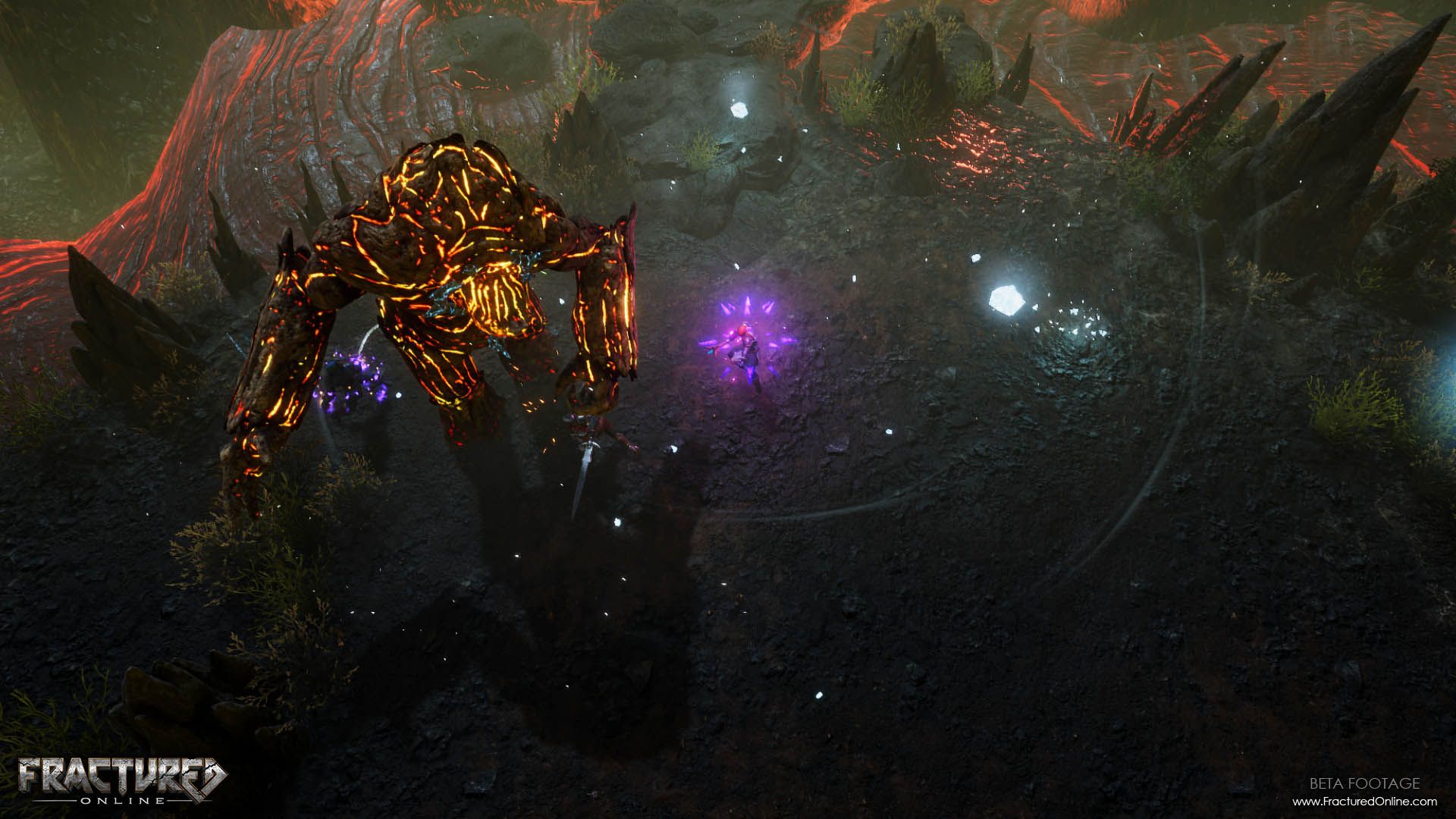 Last to hit our list of upcoming updates is the previously announced Demon race. While Gamigo didn’t have anything to show u directly during Gamescom 2022, they did have plenty to say on this new brand of Chaos. Asteroids and the wildfolk PvP world are a natural step towards a race that are expected to be even more inhuman than the Wildfolk and a play style that is all about PvP. Players who decide to re roll a Demon, when they invade after Early Access, can expect entirely open PvP. While this obviously means the Demon realm is going to be tough going and we can expect ganking, Gamigo feels that the overall scale of the world and option to dive off into one of the other worlds will balance out the concerns that we raised about the natural tendencies of open PvP environments.

Asteroids also feel like a vital step towards these additions, with Demon invasions on the horizon. Gamigo described Demon invasions as a moment where the sky turns red, players have the option to prepare for battle or get the heck out of town, because PvP will be coming either way. When these events land on unsuspecting worlds, Demons will, for a short time, be able to rampage through the more placid environments on other worlds, meaning Guilds and player populations who have invested in their homesteads will want to keep these hordes at bay.

This is an exciting idea, and PvP comes with all sorts of balancing issues, rewards, and investments to keep players from simply cutting and running. After digging into things with the team at Gamescom 2022, we’re going to wait and see exactly what comes of this upcoming roadmap. What we do know is Early Access launches on 15 September, so there’s just about enough time to get in and work out how Fractured Online works before a rush to become king of the world, whichever one that might be.

Find out more about Fractured Online ahead of the Early Access Launch of this interesting blend of survival sandbox and MMORPG over on the official website now.