Honkai Star Rail is about to set course for a brand new adventure, and after some hands-on time at Gamescom 2022, I’m ready to call this the best mobile game in the HoYoverse.

A New Future For Honkai

You might be wondering why I’m raving about a game that has been out for years already, except that’s not quite the game you’re thinking of. Honkai Star Rail is the latest on-the-go and desktop title from the aforementioned developer. Blending established aesthetics, some familiar faces, and a brand new way to play Star Rail is certainly unlike anything else coming out of this influential team of Otaku.

For those that aren’t familiar, Honkai Star Rail puts players in the form of a Trailblazer, an artificial shell containing an essence of unknown potential. Much like other similar quests, this exposition sends us out on a path to uncover answers, take down some nefarious plots, and otherwise pull for the best husbando available. 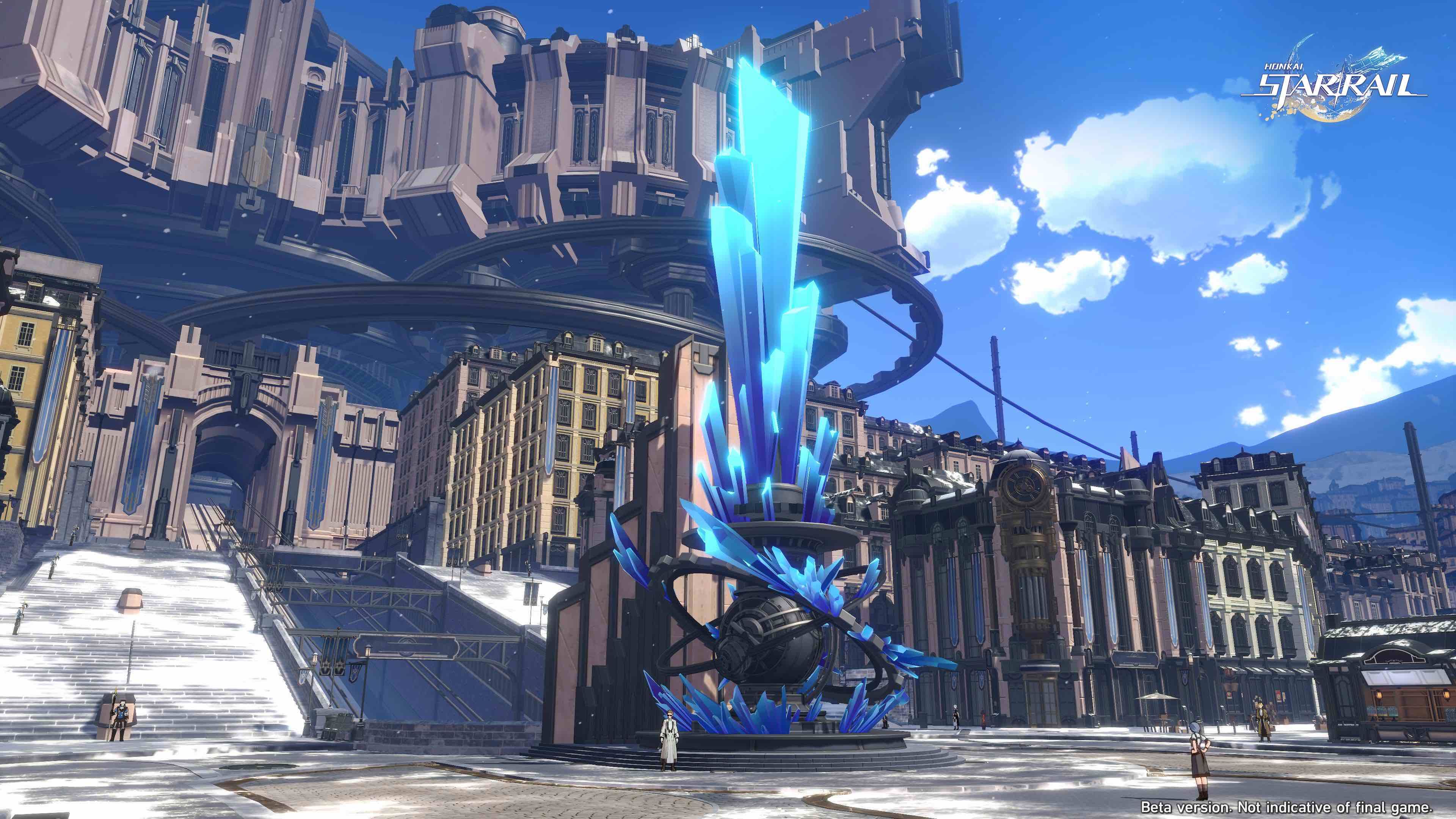 While this all sounds very Genshin by numbers, our hands-on time proved that first impression very wrong. On logging into the game at Europe’s biggest video game fair, we arrived in one of the major cities featured as part of early gameplay. Despite throwing us into an interstellar environment, HoYoverse history still weighs heavily on this upcoming title. While the things are still in closed testing, it’s far enough along in its march westward that we can see the graphical consistency with Genshin Impact. The backdrops, character animation, and combat actions all look superb and ripped straight out of the same beautifully sketched Shonen manga that HoYoverse has squirreled away somewhere.

Character design continues to be impressive, and a problem for my wallet. It's easy to identify the incoming fan favorites, but there is a small sampling of variation. The team behind this approaching juggernaut is largely sticking to what works best, lavishing detailed costumes and cute companions across the screen, making the addition of a little girl Clara and her mechanical behemoth a welcome addition to the roster.

Similarly, general controls, party loadouts, elemental systems, and menus are all largely lifted from Genshin. This might sound like a complaint, but with an established player base already used to this on-the-go menu system, why change up what works?

Star Rail, thankfully, doesn’t just use this established aesthetic to rebuild the same world over. Where Genshin Impact brings an open world with largely stoic encounters, Star Rail’s overworld has a sense of scale and life. NPCs dither and meander around the teeming cityscape. The grand cobbled streets that stretch out give a sense of scale that Mondstat doesn’t particularly have, and life seems to go on around you rather than simply waiting for you to come to it. However, running around a bigger city doesn’t make Star Rail any better than the current catalog of anime-inspired games. The combat does. 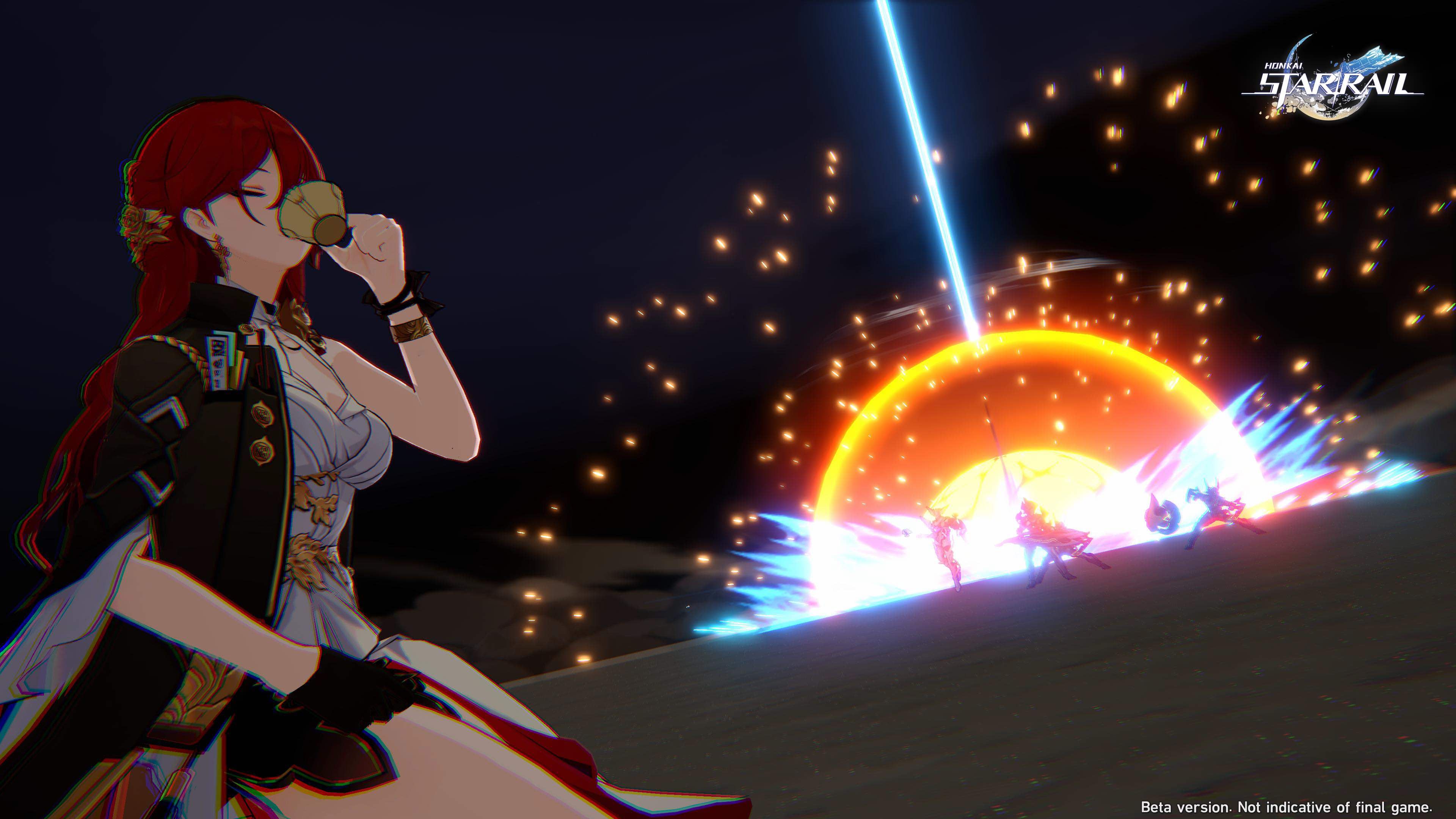 Combat And How It Works

Ditching the dynamic approach of Genshin, Star Rail drops players into turn-based combat encounters. More akin to JRPG battles than established dynamic hack and slash, Star Rail leaves plenty to think about. From the moment I took advantage by attacking first in the overworld, any army of guards, knights, or bandits required more than a bash around the head and a quick dodge roll. Much as we’ve come to expect from previous games, a band of 4 companions are can leap into battle, each wielding their abilities and potentially powerful ultimate attack.

These character combat abilities are, again, almost directly comparable to Genshin, but that’s where things diverge. With a basic ATK, Skill, Ultimate, Talent, and Technique to each of these four warriors, you’ll need to choose what to use and when. Techniques are largely triggered when entering combat, and Talents act as a passive add-on to enhance overall combat capability. The rest of these, however, will feel a lot more familiar.

While Genshin provides players with dynamic combat, the turn-based attacks available here require careful consideration. There’s no rolling out of combat. In fact, there didn’t even appear to be a retreat button either. Once you’re in, you’re all in. During a relatively simple set of encounters, it became evidently clear that the in-game elemental effect, combos, and support systems require more min-maxing than action combat equivalents. To compound my confusion, powerful secondary skills draw from a party-wide pool of action points, that are recharged using standard attacks. Attacks cannot simply be spammed, healing isn’t necessarily going to ensure that everyone gets a buff, and thinking forward is always a consideration.

Stepping sideways into this seemingly stoic combat stance allows this sci-fi fantasy to dabble in many mechanics we might not otherwise see, even in Sumeru. Ideas like overwatch, retaliation and taunts are all on the table. There is even an opportunity to interrupt the turn-based order and to drop an incredible burst of firepower with an Ultimate. The variety of potential ways that a situation can turn on a single choice makes this a far more thoughtful game than I had anticipated.

Not only do these changes to combat make decisions more deadly, but the most influential part of this title \ticks over at an entirely different pace from its predecessors. I couldn’t identify any running clock and briefly confirmed that there isn’t one. So, why is this such a big deal for on-the-go gamers? There’s a reason turn-based combat has worked so well for so many mobile experiences, while the FPS scene has largely struggled to make the same kind of mark in small screen scenarios.

Despite the clear calls to the Mondstat mainstay of the verse, Honkai Star Rail has stopped at an entirely different station. The move to a very deliberate style of combat doesn’t require 90Hz displays, stellar graphics, high frame rates, fast reactions, or even a screen big enough to play on. There’s no rolling out the way. Instead, Honkai Star Rail’s change of pace is likely to bring the HoYoverse to more mid-range and budget handsets with battlefield knowledge being far more important than what’s behind the Gorilla Glass. There's no bashing a screen that might not respond or momentary on-screen stuttering followed by fiery death., just considered destruction.

For that reason alone, I’m excited to see more when Honkai Star Rail comes to mobile platforms, and yes I’ll probably be hiding my wallet too. For now, you can find out more about this unexpected arrival over at the official website now.