Dreamside Interactive has created a fantasy setting that I want to love with the open-world survival RPG Frozen Flame. The stylized environment looks great, and I found myself running from one location to another, wondering what I would find next. Unfortunately, while I understand that it is currently in closed beta and that much is still subject to change, some underlying issues kept me from enjoying Frozen Flame to the extent I would have liked.

Frozen Flame gets you into combat quickly after a short introduction which sets the tone for an action-packed experience. It felt good using different weapons early. Learning the basic mechanics was also quick and easy, even if said mechanics were a bit clunky. It gave me the feel of being a mighty warrior battling against an onslaught of enemies. Of course, by the end of the introduction, I had died and was immediately taken to the character creation. 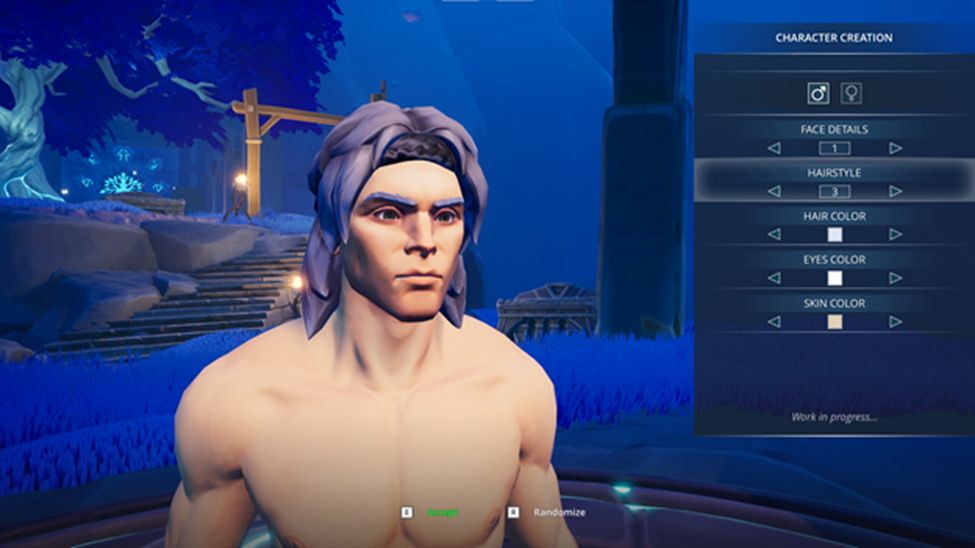 Character creation options are limited in Frozen Flame, though there are enough to make a visually interesting character. After a few quick clicks, I was raised from the dead to carry on the fight against the Frozen Flame. Mithra the Keeper, it seems, is now bringing back Viking warriors from the dead since they are running low on live candidates.

After passing through the doorway/portal, I immediately started exploring the first region. Frozen Flame’s environment is vibrant, with many visual hooks that immediately tempted me to run off in multiple directions. My first choice in direction was a difficult one as I had a white glowing bird flying off in one direction and in the other a beam of light that marked an interesting set of ruins. The developers do a great job of using glowing birds and moths to highlight progression-relevant items in the world, so don’t be like me and die in the ruins out of the gate… follow the bird to start. There are lots of hidden spots that offer rewards as well so long as I was willing to explore and I became pretty adept at spotting clusters of moths in unusual locations.

I quickly picked up several memory shards by completing challenges at Obelisks and locating Memory Stones, unlocking my first set of crafting recipes, which allowed me to start cooking and try out all the base weapons: sword, club, spear, greataxe, wood staff, and bow. I also enjoyed finding my first few chests, which sometimes rewarded me with a weapon or a piece of armor.

When upgrading character attributes for the first time by praying at a shrine I could pick from vitality, strength, constitution, dexterity, perception, intellect, wisdom, and discipline. The description in the UI is clear, and at a glance, it was easy for me to understand how they related to different weapons.

It also helps that Frozen Flame’s UI is great. I could easily find information without an extensive tutorial, and opening the map provided me with icons for all the locations I had discovered in each area. Once I completed a challenge, found a memory stone, opened a chest, or defeated a summoned boss, it greyed out, making my inner completionist happy. The compass was helpful as well. As I explored new locations of interest, new icons would pop up without opening up the map. If I did happen to run out of things in my immediate area, I could start working my way towards a beam of light in the distance that highlighted a point of interest.

Unfortunately, after my initial few hours, issues with Frozen Flame’s world and systems started to crop up. I spoke earlier about how the environment looks great, and it does, making me want to explore everything. In some areas, looking off in the distance, I could see ancient dragon bones and caves to explore. Finding new fast travel circles made it easy to jump back and forth to explore each corner of a map that I may have missed. But each area/zone is boxed in by zone walls, and while some players may not find this an issue, I found the lack of freedom a bit disappointing for an open-world game.

Building in Frozen Flame currently feels basic and functional, though as I stated before, this is a closed beta many of these systems might change in the future. I mainly used it to create a storage space for resources and eventually a platform for my crafting stations. Foundations could be frustrating to place due to uneven ground. In many areas they would simply break when placed. Snapping pieces to one another is also finicky at times compared to similar games, especially for roof tiles. I could also build a Chronos Shield to prevent building and station decay in an area, but I didn’t see much reason for it in the early game.

I found combat to be the system that pulled me most out of the experience. It is a stick and move style of melee combat, similar to Conan Exiles but without the ability to block even when using a shield and less of a chance to stagger or knockdown enemies. I was constantly taking a swing at enemies and then dodging away. It broke up the combat flow for me constantly. Melee weapons felt designed for follow-up/combo hits, but unless you can knock an enemy down, staying in melee range can be a quick trip back to a respawn point. I can see how multiple players working together in combat would be useful with one attacking while the other dodged.

Frustratingly though, at times dodging doesn't feel responsive. Stamina is also a limiting factor, so I was constantly back peddling while I waited for it to regenerate. It felt like I was being pushed into using ranged weapons and sniping at enemies while running. But when using that tactic, enemies would despawn and reset after fired at them for too long or if you ran out of their initial spawn area.

Ultimately, I fought toe to toe most of the time, trying to dodge through attacks. I did like that you could lure different types of enemies into attacking each other. While oh so many boars had to sacrifice themselves heroically, they eventually defeated the elemental in the first region with a little bit of my help.

The speed at which weapons break down is also a problem, especially since you only have four hot bar slots. Early on, I was constantly carrying extra weapons so that I wasn’t left punching my enemy mid-combat. It doesn't help that you can't repair gear until a workbench is built, typically in the second region.

Equipping a book of magic and certain weapons does give you access to casting spells. So technically, you do get a few extra hotkeys. But half the time, I didn’t bother slotting things back into my hotbar after death unless I was about to go exploring another part of the map. It was easier to go back and slug it out with my default weapon and armor.

Advancement in its current state is also a bit disappointing, but not for the reason you might think. It feels slow after the initial burst of levels and recipes. Bear with me here. There are several character elements to increase, but each one is separate, so for me, it currently doesn’t feel like a cohesive system.

I gained levels to increase my attributes, but don’t gain memory shards from leveling to unlock recipes. Memory shards I have to find via challenges and various Memory stones throughout the map. For a new tier of recipes, I need to unlock all, or almost all recipes, in the previous tier. Eventually, I can also unlock abilities, but for those, I need two other resources gathered by defeating summoned bosses and clearing protected chests in each region.

To increase my attributes, I need to pray at one of the shrines located throughout each region. I can eventually buy recipes up to tier 5. But certain recipes I can only unlock at the crafting station where the item is made. Finally, my character abilities are unlocked in the Cave of Chronos after defeating all of the first region’s summoned bosses. 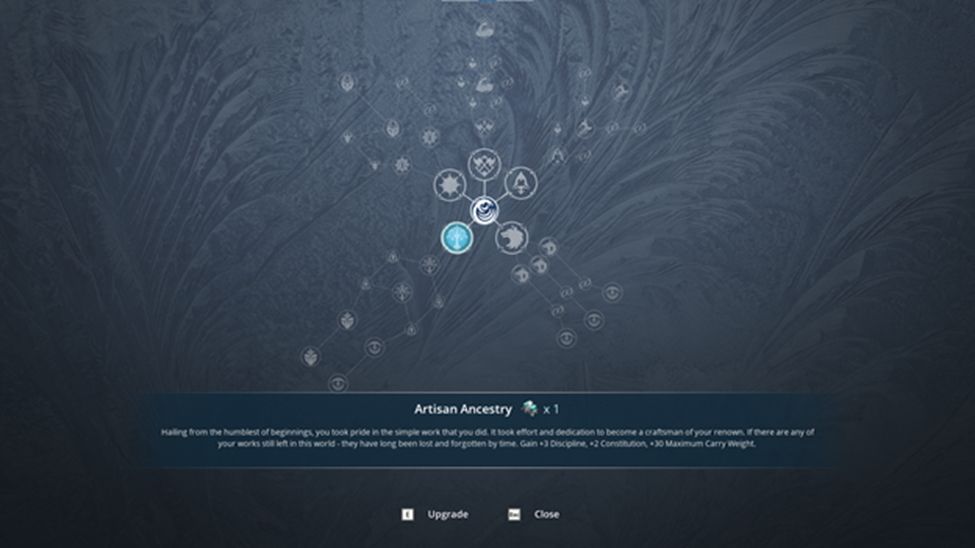 I can see what the developers were going for here, and on paper, it would sound cool to gain power from each separate system/location. The Cave of Chronos also looks great. The abilities in the cave allow me to specialize in different ancestries: artisan, explorer, rogue, warrior, and arcanist. These then unlock new abilities and passive bonuses that can be bought. But in practice, having to upgrade my character at different in-game locations slowed down my adventures. It takes me out of that action-packed experience promised by the introduction.

Did I enjoy my time so far in the Frozen Flame closed beta? Even with the various issues, I did. Many of the problems I have noted with combat and advancement are all things that can be patched and polished before the game releases. The environment looks great, in-game music made exploring a relaxing experience, and I felt drawn to learn more about each region. Each new tablet or enemy made me more curious about the world.

It would be nice to see more story/lore revealed as you collected memory shards in the future and some way to tie the various elements of character advancement together. With some further improvements and added content, Frozen Flame will be something special I think many players will love. The game is currently in closed beta, with early access coming later this year on Steam.